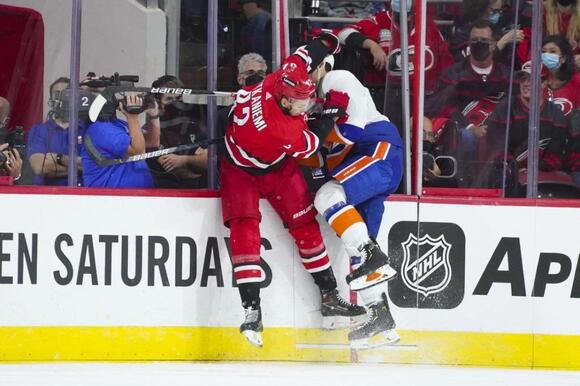 Andrei Svechnikov posted two goals and an assist and Teuvo Teravainen had a goal and an assist as the Carolina Hurricanes defeated the visiting New York Islanders 6-3 in the season opener for both teams Thursday night in Raleigh, N.C.

The Hurricanes broke a 2-2 tie in the second period when Jordan Martinook and Nino Niederreiter scored less than five minutes apart.

Ten Carolina players had either a goal or an assist.

The Islanders, who led the NHL with 10 shutouts last season, couldn’t slow down the Hurricanes after the first period. Carolina racked up 22 shots in the second period. 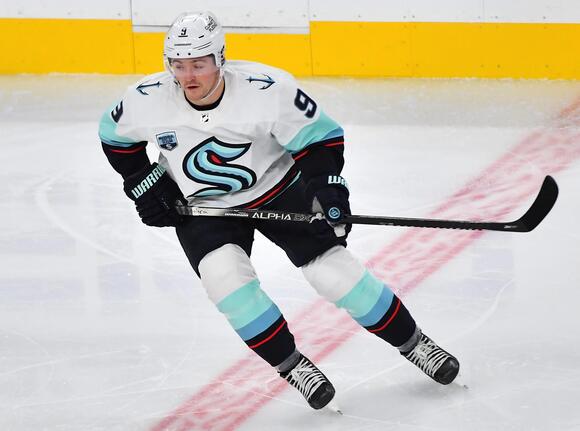 The game was stretched out, in part because of a sequence involving the game’s first goal, which was scored by Barzal. But that tally wasn’t granted until an extended video review.

The game’s first seven goals came in even-strength situations until Teravainen’s power-play delivery with 8:24 remaining in the third period.

The Islanders managed only eight shots on goal in the third period. They were 0-for-3 on power plays for the game.

This was the first of 13 consecutive road games for the Islanders, who will begin playing home games in a new arena next month.

The Hurricanes were 20-3-5 on home ice in last season’s regular season, so they built on that success right away.

This marked the first of three scheduled meetings between the Islanders and Hurricanes. The other two are slated for April.

Carolina Hurricanes forward Andrei Svechnikov has been fined $5,000 for kneeing forward Scott Laughton of the Philadelphia Flyers in Friday’s game, it was announced Saturday by NHL Player Safety. Svechnikov collided with Laughton knee-to-knee along the boards at 5:25 of the second period at Wells Fargo Center in a game...
NHL・9 DAYS AGO
NHL

The NHL’s inconsistency when it comes to penalizing slew-foots continues, as Devils defenseman P.K. Subban committed his fourth of the season Friday night and apparently won’t face any supplemental discipline for it.
NHL・2 DAYS AGO
cbs17

The New York Islanders are finally set to play at home following 13 consecutive games on the road to begin the season. The mid-November home opener that the Isles are awaiting is a prefect representation of how challenging the start to the year was for New York. While they waited for their new home to be completed, the Islanders suited up as the road team for 13 consecutive contests to begin this campaign.
NHL・13 DAYS AGO
The Hockey Writers

This latest edition of the NHL Stat Corner covers the past two days (Friday/Saturday) since the NHL took a one-day break for American Thanksgiving. Scoring highlights this entry with lots more player and team stats and milestones from around the NHL. Ovechkin Goals Fuel the Capitals. Alex Ovechkin is tied...
NHL・8 DAYS AGO
elitesportsny.com

The Islanders were abysmal in Week 6, but did any player do well?. The New York Islanders are in rough shape, at the moment. They were greeted with news that their star defenseman, Ryan Pulock, would be out long-term with an injury, they’re on a six-game losing streak, and they seem to lose players to COVID-19 protocol every day.
NHL・15 DAYS AGO
The Hockey Writers

The New York Rangers will face the New York Islanders for the first time this season tonight at the new home venue for the Islanders, UBS Arena. The Rangers are coming off a thrilling win against the Buffalo Sabres in which defenseman Ryan Lindgren netted the game-winning goal with less than one second remaining in regulation, improving the Blueshirts record to 11-4-3. The Islanders have struggled so far during the first month of the season with a record of 5-8-2, are in last place in the Metropolitan Division and the midst of a six-game losing streak. However, expect the rivalry to remain intense during tonight’s game regardless of where both teams are currently in the standings. Let’s take a look at some storylines for both clubs ahead of this evening’s game.
NHL・12 DAYS AGO

The New York Rangers played their first ever game against the Islanders at the UBS Arena. It took them a little while, but eventually they proved too much for the undermanned and slumping Isles. Chris Kreider may have notched two goals, but it was the Rangers 4th line that lifted...
NHL・12 DAYS AGO
nyihockeynow.com

ELMONT, N.Y. — Who knew what the New York Islanders would be most thankful for at Thanksgiving dinner would be that they went a full day without any new positive COVID test results. The team was able to at least take a little sigh of relief on Wednesday when they...
NHL・12 DAYS AGO
Sportsnaut

Any time two teams from the same city face off in any sport, a rivalry matchup will be played. On Wednesday night, NHL fans will see the Rangers take on the Islanders in what could be a very heated and entertaining game. How to Watch New York Rangers at New...
NHL・12 DAYS AGO

ELMONT, N.Y. — Eight isn’t so great for the New York Islanders, who dropped their eighth game in a row on Friday night. They fell to the visiting Pittsburgh Penguins 1-0 at UBS Arena and dropped to 5-10-2. How it Happened: Ilya Sorokin did just about all he could for the New York Islanders on Friday night, but it was Kasperi Kapanen’s goal at 16:41 that proved to be too much for New York to overcome. The lone goal came off an odd-man rush with Thomas Hickey as the lone defender back to try and stop things.
NHL・10 DAYS AGO
PensBurgh

Who: Pittsburgh Penguins (9-6-4, 22 points, 5th place Metropolitan division) @ New York Islanders (5-9-2, 12 points, 8th place Metropolitan division) How to Watch: AT&T Sportsnet locally in Pittsburgh, MSG+ for the away broadcast, ESPN+. Opponent Track: The Islanders season has come apart at the seams at the tail-end of...
NHL・11 DAYS AGO
Sportsnaut

WATCH: Andrei Vasilevskiy gets 200th win for Lightning vs. Kraken

After the Ottawa Senators had to miss games due to nearly a dozen players and coaches being placed in COVID protocol, there is now a second team that will have games postponed by the NHL. On Saturday, the league announced that the New York Islanders would have their games postponed through at least November 30th.
NHL・9 DAYS AGO
CBS News

The New York Islanders' next two upcoming games, and possibly more, have been postponed due to an outbreak of COVID-19, the NHL announced Saturday. The league said that "the team's games will be postponed at least through Tuesday, November 30." Eight players on the team are currently under the NHL's...
NHL・9 DAYS AGO
NHL

PHILADELPHIA -- The Carolina Hurricanes scored four goals in the second period of a 6-3 win against the Philadelphia Flyers at Wells Fargo Center on Friday. Sebastian Aho scored twice and Jesperi Kotkaniemi had a goal and an assist for Carolina (15-3-1). Antti Raanta made 20 saves. Ivan Provorov, Joel...
NHL・10 DAYS AGO
elitesportsny.com

Who are the best youngsters in the oldest organization in the NHL?. The New York Islanders are the oldest team in the NHL. That usually isn’t a great thing, but they’ve made it to the Eastern Conference Final the past two seasons. Who knows what they could’ve done had they not had to face the best team in the league.
NHL・9 DAYS AGO
Sports Illustrated

The Capitals head to Raleigh on Sunday to take on the Hurricanes for in a battle for first place in the Metropolitan Division. Both of these squads are knotted at 31 points atop the division, though the Hurricanes have played two fewer games. Both are coming off impressive wins. How...
NHL・8 DAYS AGO