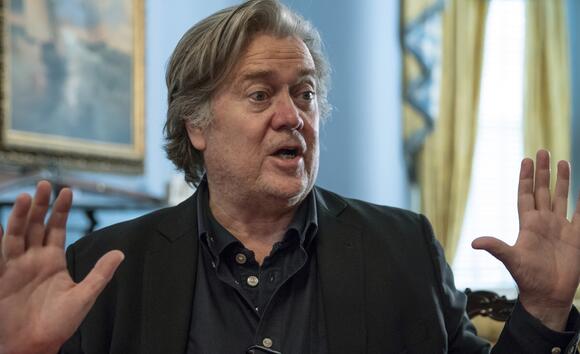 The U.S. Marshals could soon deploy against witnesses facing subpoenas from Capitol riot investigators, a House Democrat warned this week.

Rep. Stephanie Murphy, a member of the House Jan. 6 Select Committee, presaged what comes next even before the panel announced that it is moving forward with holding former Trump White House chief strategist Steven Bannon in criminal contempt for failing to show up for a deposition on Thursday. The next step is a business meeting planned for Tuesday.

Former President Donald Trump directed a quartet of close advisers, including Bannon, not to comply with subpoenas issued by the House Jan. 6 Select Committee that sought documents by last week and testimony this week.

"Mr. Bannon has declined to cooperate with the Select Committee and is instead hiding behind the former President's insufficient, blanket, and vague statements regarding privileges he has purported to invoke," said Select Committee Chairman Bennie Thompson in a press statement on Thursday. "We reject his position entirely. The Select Committee will not tolerate defiance of our subpoenas, so we must move forward with proceedings to refer Mr. Bannon for criminal contempt."

Bannon's team sent a letter last week informing the committee that he would not cooperate with the select committee's subpoena.

"It is therefore clear to us that since the executive privileges belong to President Trump," wrote Robert Costello, Bannon's lawyer, "and he has, through his counsel, announced his intention to assert those executive privileges enumerated above, we must accept his direction and honor his invocation of executive privilege. As such, until these issues are resolved, we are unable to respond to your request for documents and testimony."

Mark Meadows, former White House chief of staff, and Kash Patel, a former Pentagon aide, were so far "engaging" with the committee, panel leaders said. Dan Scavino, another Trump White House aide, was served a subpoena on Friday after a struggle to locate him, according to CNN .

Eleven others tied to the organization of the Jan. 5 and Jan. 6 rallies leading up to the Capitol riot have also been subpoenaed .

If the Justice Department prosecutes Bannon and he is convicted, he could face fines up to $100,000 and up to a year in prison.

Any notice trump hasn't been on screaming about his having to testify?? Bet he's having some "Wasted days and Wasted nights"😆🤣

they should be charged with contempt arrested held in jail till they answer questions that everyone in this country needs to know. is there someone to be held accountable. truth facts and justice. end of story

Steve, looks like they saved your room from the last time and they have a really nice addition for you this time. Your very own autograph portrait of Donald throwing you under the 🚌.. 👋👴

Capitol riot investigators have found evidence possibly linking the Trump White House to the Justice Department in efforts to overturn the results of the 2020 election.
GEORGIA STATE・18 HOURS AGO
WashingtonExaminer

A court has rejected the request of two former Trump administration officials to be reinstated on the U.S. Naval Academy board.
CONGRESS & COURTS・21 HOURS AGO
Fox News

Former White House chief of staff Mark Meadows will no longer be cooperating with a committee investigating the events of Jan. 6, despite previous efforts to work with them. Meadows and his attorney George Terwilliger notified the committee Tuesday morning, after the senior Trump administration official could not come to terms with lawmakers on an arrangement to work with them.
POTUS・6 HOURS AGO

Mark Meadows Walks Back on Deposition Agreement With Jan. 6 Committee

This latest development comes just a week after the House panel had announced the former White House chief of staff's cooperation.
CONGRESS & COURTS・4 HOURS AGO
The Guardian

On a chilly October morning in Dr. Sara Dahill-Brown’s Economic Inequality and American Politics class, my classmates and I were greeted by a slide featuring an image of the Jan. 6 insurrection at the U.S. Capitol. Brown be- gan their lecture by telling the class that they normally let the class debate whether American politics were broken, but after the Capitol riot, they were skipping the debate and stating the fracture outright.
PROTESTS・5 DAYS AGO
Vanity Fair

Republicans: Let People Die of COVID or So Help Us We’ll Shut Down the Government

It’s hard to say what’s more idiotic: The possibility the GOP could shut down the federal government, or the reason they’re threatening to do so. Lawmakers are facing a Friday deadline to fund the government, with Democrats and Republicans currently at loggerheads over how long to kick the can down the road. Democrats want to pass a continuing resolution, or short-term spending bill, that would push off a debate over funding until next year. But a group of Senate Republicans, with support from their House colleagues, are preparing to complicate things further. According to Politico, a cadre of conservatives are threatening to shut down the government to keep Joe Biden’s COVID vaccination requirements on businesses from taking effect.
CONGRESS & COURTS・6 DAYS AGO

The House of Representatives select committee investigating the 6 January insurrection will meet on Wednesday to consider authorising criminal contempt of congress charges against Jeffrey Clark, the ex-Trump Justice Department attorney who pushed to weaponise the department in service of former president Donald Trump’s push to overturn results of the 2020 election.If the committee votes in favor of holding Mr Clark in contempt, a vote on the measure by the full House of Representatives would be the next necessary step before House Speaker Nancy Pelosi could refer him to the Department of Justice for possible prosecution. The former Trump administration...
CONGRESS & COURTS・7 DAYS AGO
Washington Times

The U.S. Capitol rioter known as the QAnon Shaman on Tuesday filed a notice of appeal for his 41-month prison sentence for his role in the Jan. 6 attack. Jacob Chansley also told U.S. District Judge Royce Lamberth on Monday that he wants to replace his lawyer, Al Watkins, with attorneys John Pierce, who once represented acquitted Kenosha protest shooter Kyle Rittenhouse and William Shipley.
PROTESTS・7 DAYS AGO
CBS News

Lawyers for former President Trump tried to convince a panel of judges that he should be allowed to withhold records from congressional investigators looking into the Capitol riot. Meanwhile, Mr. Trump's former chief of staff Mark Meadows has decided to cooperate with the probe. Kris Van Cleave has more.
POTUS・6 DAYS AGO
The Independent

The largest newspaper in Missouri has called for one of the state’s US senators to be promptly investigated by a congressional panel over his alleged role in the Jan 6 riot at the US Capitol.More than 10 months after the Senate ethics committee said it was to probe the actions of Missouri’s Josh Hawley and Texas’s Ted Cruz for their alleged encouragement to supporters of Donald Trump seeking to overturn the 2020  election, there has been little outward sign of progress.Several times, however, both Mr Cruz and Mr Hawley have defended their actions that day, with the Missouri senator...
ADVOCACY・7 DAYS AGO

A Capitol Riot Trial Is Slowly Starting To Take Shape

WASHINGTON — A string of Thanksgiving eve filings in the case of Guy Reffitt — a Texas man charged with bringing a handgun to the US Capitol during the Jan. 6 riot — offered an early glimpse into what a trial in the unprecedented prosecution effort will look like. Reffitt’s...
PROTESTS・7 DAYS AGO
BBC

A Michael Jackson impersonator who is accused of participating in the US Capitol riot has clashed with a judge after rejecting the court's authority. James Beeks was accused of "gobbledygook" by the judge after claiming he had "divine" authority. Also an actor, Mr Beeks was arrested after FBI agents went...
U.S. POLITICS・7 DAYS AGO
Reuters

WASHINGTON, Nov 30 (Reuters) - U.S. appeals court judges on Tuesday signaled skepticism toward former President Donald Trump's bid to keep records about his conversations and actions before and during the deadly Jan. 6 Capitol riot by a mob of his supporters away from congressional investigators. A three-judge panel of...
POTUS・7 DAYS AGO
The Week

WASHINGTON — The House committee investigating the Jan. 6 storming of the U.S. Capitol has subpoenaed leaders of militia groups linked to the riot. The subpoenas announced Tuesday were issued to Oath Keepers founder Elmer Stewart Rhodes, a former Army paratrooper and Yale Law graduate; Henry “Enrique” Tarrio, who was chairman of Proud Boys at the time; and Robert Patrick Lewis, chairman of a group that calls itself 1st Amendment Praetorian.
PROTESTS・13 DAYS AGO
The Independent

Who has the Capitol riot committee subpoenaed so far?

Nearly five months after the House of Representatives authorised a select committee to investigate the worst attack on the US Capitol since Major General Robert Ross ordered it burned in August 1814, the committee of seven Democrats and two Republicans has issued subpoenas to a total of 43 people, the vast majority of whom previously worked for the Trump administration or former president Donald Trump’s re-election campaign.Most recently, the committee has demanded documents and testimony from leaders of extremist groups that participated in the violence on 6 January, including the Proud Boys, Oath Keepers, and 1st Amendment Praetorian.A review The Independent has...
CONGRESS & COURTS・13 DAYS AGO
spectrumlocalnews.com

WASHINGTON (AP) — A Florida man photographed carrying a lectern belonging to House Speaker Nancy Pelosi’s office at the U.S. Capitol during the Jan. 6 insurrection pleaded guilty Monday for his part in the riot. What You Need To Know. Adam Johnson, 36, pleaded guilty for is role in the...
FLORIDA STATE・14 DAYS AGO
Billings Gazette

Two East Helena men charged in the Jan. 6 U.S. Capitol insurrection entered not guilty pleas Monday for an updated indictment in their case. Joshua Calvin Hughes and Jerod Wade Hughes will return to court Jan. 7 for a status conference, according to notes added to their court docket. Prior to Monday the status conference had been set for Dec. 1.
EAST HELENA, MT・14 DAYS AGO