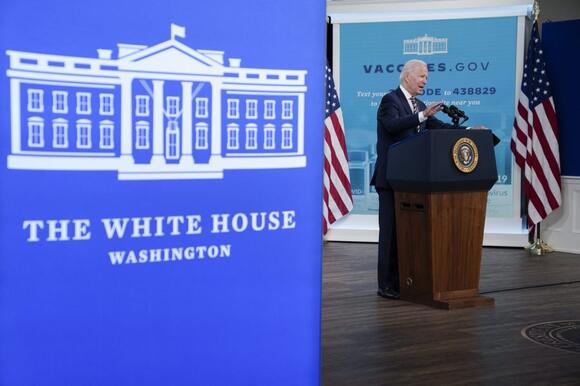 WASHINGTON (AP) — President Joe Biden on Thursday signed into law a bill raising the nation’s debt limit until early December, delaying the prospect of an unprecedented federal default that would cause economic disaster.

The House passed the $480 billion increase in the country’s borrowing ceiling on Tuesday after the Senate approved it on a party-line vote last week . The eventual approval came after a protracted standoff with Senate Republicans, who derailed initial Democratic efforts with filibusters, delays that require 60 votes to halt.

Ultimately, a handful of Senate Republicans agreed to join Democrats and voted to end GOP delays and move to a final vote on the legislation, but Minority Leader Mitch McConnell has said Republicans will offer no support for another increase in December.

Treasury Secretary Janet Yellen had warned that the U.S. would hit its borrowing limit Monday, an unprecedented situation that she and others cautioned could lead to economic catastrophe for a nation still reeling from a global pandemic. Routine government payments to Social Security beneficiaries, disabled veterans, and active-duty military personnel would potentially be delayed, and the economic fallout in the U.S. could ripple through global markets.

Get daily news, weather, and breaking news alerts straight to your inbox! Sign up for the abc27 newsletters here!

The passage of the short-term debt ceiling increase ensures that, for now, the U.S. will continue to meet its obligations. But it sets up another potential cliff at the end of the year — at a time when lawmakers will also be working to pass a federal funding bill to avert a government shutdown.

Republicans have said Democrats should use a budgetary maneuver to pass an increase in the debt limit without Republican support, like the process Democrats are using for Biden’s massive climate change and social safety net plan. But Democrats have resisted that option. The clash between the two parties leaves Congress without a clear solution to avert the next default deadline in December, but the White House has emphasized it is still pursuing a bipartisan increase.

Lawmakers from both parties have used the debt ceiling votes as leverage for other priorities. House Speaker Nancy Pelosi threatened to vote against raising the debt ceiling when President Donald Trump was in office, saying she had no intention of supporting lifting the debt ceiling to enable Republicans to give another tax break to the rich. And Republicans in 2011 managed to coerce President Barack Obama into accepting about $2 trillion in deficit cuts as a condition for increasing the debt limit — though lawmakers later rolled back some of those cuts.

Biden promised no vaccine mandates; the Senate will vote to overturn his private employee mandate

The coronavirus vaccines developed under the Trump administration’s “Operation Warp Speed” are medical miracles, but the decision to get vaccinated should be a personal health choice. It shouldn’t be up to President Joe Biden. A year ago this week, Biden said of the COVID-19 vaccines ,...
U.S. POLITICS・2 HOURS AGO
WashingtonExaminer

Rep. Alexandria Ocasio-Cortez called on Senate Democratic leaders on Tuesday to override the parliamentarian and include a pathway to citizenship in President Joe Biden’s $1.75 trillion Build Back Better legislation.
CONGRESS & COURTS・19 HOURS AGO
Fox News

'The Five': Democrats flee Biden over fears of being 'smoked in the midterms'

Many congressional Democrats are increasingly fleeing the shadow of their party's leader, President Biden, while the United States continues to socioeconomically falter under his leadership amid anxiety over a possible 2010-like Republican wave in the quickly approaching 2022 midterms. The panel on "The Five" discussed how Biden's ineffective and unpopular...
PRESIDENTIAL ELECTION・16 HOURS AGO
Business Insider

Mark Meadows baselessly claimed in his memoir that Biden's 81 million votes in the 2020 election don't constitute "a real number." He parroted Trump's broad and unspecified claims that the election was rigged and stolen. Meadows repeatedly pressured state and national officials to investigate conspiracy theories after the election. Former...
PRESIDENTIAL ELECTION・20 HOURS AGO

The House of Representatives passed a bill Tuesday night that contains a provision that will allow the Senate to pass a debt ceiling hike with only Democratic votes. In a vote of 222 to 212, the House passed a bill that delays Medicare sequestration cuts for three months, which had rules to increase the debt ceiling tucked inside.
CONGRESS & COURTS・17 HOURS AGO
AFP

President Joe Biden blasted a series of blistering "inappropriate personal attacks" by Republicans targeting his pick to serve as a top banking regulator, as he accepted her withdrawal Tuesday from consideration for the job. Soviet-born Cornell University law professor Saule Omarova had been nominated as comptroller of the currency, a role overseeing two thirds of the US banking system -- or some 1,200 institutions with a combined $14 trillion in assets. She pulled herself from consideration after her nomination was derailed by several Republican senators falsely implying she was a communist, as well as legitimate cross-party concerns about her past pronouncements on banking reform. "As a strong advocate for consumers and a staunch defender of the safety and soundness of our financial system, Saule would have brought invaluable insight and perspective to our important work on behalf of the American people," Biden said in a statement.
PRESIDENTIAL ELECTION・17 HOURS AGO
WDBO

WASHINGTON — (AP) — Congressional leaders reached an elaborate deal Tuesday that will allow Democrats to lift the nation’s debt limit without any votes from Republicans, likely averting another last-minute rush to avoid a federal default. Hours later, the House passed legislation overwhelmingly along party lines that kicked off a multi-step process.
CONGRESS & COURTS・14 HOURS AGO
Business Insider

Biden lead Trump by one point, 46% to 45%, in a Wall Street Journal poll full of bad news for his agenda and Democrats' chances in 2022.
PRESIDENTIAL ELECTION・20 HOURS AGO

More voters would back former President Donald Trump than President Joe Biden in a hypothetical match-up if the 2024 election were held today, according to a new Harvard CAPS-Harris Poll survey released exclusively to The Hill.
PRESIDENTIAL ELECTION・23 HOURS AGO
The Independent

What Joe Biden has said about running in 2024

Joe Biden has repeatedly said he intends to run for re-election when his first term is up in 2024 – but that doesn’t mean a second campaign is guaranteed.To be clear, the president and his team have never equivocated about the chances he will try for a second term. In March, he was asked and gave a straightforward answer: “The answer is yes, my plan is to run for re-election. That’s my expectation.”There was, he conceded, room for other scenarios: “I’m a great respecter of fate. I’ve never been able to plan three-and-a-half years ahead for certain.” But since...
PRESIDENTIAL ELECTION・21 HOURS AGO
San Diego Union-Tribune

President Joe Biden says Saule Omarova's nomination to lead the Office of the Comptroller of the Currency will be withdrawn
SAN DIEGO, CA・15 HOURS AGO
USA TODAY

The agreement would create a one-time process to allow Senate Democrats to raise the debt ceiling on their own without fear of a GOP filibuster.
CONGRESS & COURTS・14 HOURS AGO

US senators struck a deal Tuesday to create a one-time law allowing Democrats to lift the nation's borrowing authority and avert a catastrophic credit default without requiring votes from the opposition Republicans. The House of Representatives approved the fix in an evening vote and it is expected to be approved by the Senate in the coming days -- allowing lawmakers to avert the crisis with a simple 51-vote majority in the upper chamber. The Bipartisan Policy Center said last week it expected the United States would no longer be able to meet its debt repayment obligations between December 21 and January 28. US Treasury Secretary Janet Yellen has put the deadline even earlier -- next Wednesday. "Nobody wants to see the US default on its debts. As Secretary Yellen has warned, a default could eviscerate everything we've done to recover from the Covid crisis," Democratic Senate Majority Leader Chuck Schumer said on the floor of the chamber.
CONGRESS & COURTS・11 HOURS AGO
MarketWatch

At issue was whether to punish the kingdom for its human rights abuses and its involvement in Yemen’s civil war.
FOREIGN POLICY・15 HOURS AGO
The Independent

The commission tasked by President Joe Biden with studying potential changes to the Supreme Court has released its final draft report, a cautious take on proposals for expanding the court and setting possible term limits. The 36-member bipartisan commission was not charged with making recommendations under the White House order that created it. As a result, much of the final report from the group, largely composed of academics who have been studying court reform and holding hearings, is context and history that may be used going forward in proposals to introduce changes. The panel, led by Bob Bauer, who...
CONGRESS & COURTS・15 HOURS AGO

BREAKING — A federal judge today set a July 18 date for STEVE BANNON’s trial for contempt of Congress, Kyle Cheney reports. The date essentially splits the difference between the Justice Department’s request for April 15 and Bannon’s ask for Oct. 22. — What this means for the Jan. 6...
U.S. POLITICS・22 HOURS AGO
Newsweek

In this daily series, Newsweek explores the steps that led to the January 6 Capitol Riot. On December 8, a week before the electoral college was scheduled to meet, one of Donald Trump's last avenues of appeal was shut off, as the U.S. Supreme Court declined to hear a claim challenging Pennsylvania's voting by mail.
CONGRESS & COURTS・7 HOURS AGO
Fox News

Many Senate Republicans on Wednesday were frustrated with a deal Senate Minority Leader Mitch McConnell reached, on a party-line vote, to allow Democrats to raise the debt ceiling — as Congress took one step closer to ending the debt-limit saga that started in the summer, when Republicans first said they would refuse to raise it.
CONGRESS & COURTS・3 HOURS AGO
POLITICO

Alienating the lawmaker likely to chair the House oversight panel in 2023 would start a GOP majority on a rough note for the Biden administration.
CONGRESS & COURTS・23 HOURS AGO