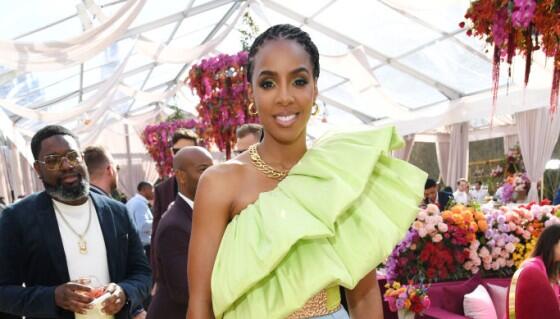 Jay Z was all smiles last night for the star-studded screening of his new project, The Harder They Fall in Los Angeles but there was one special guest that made his smile grow even wider.

The event brought a ton of celebrities including Karrueche Tran, Winnie Harlow, and of course, his wife Beyoncé. But it was seeing Kelly Rowland that made Jay do a full 180 before heading into the event. Jay’s face completely lit up when he saw the former DC3 member and had the purest reaction as he approached his friend for a hug. “I didn’t even know you were here,” he told Kelly as he walked over to share an embrace.

The entire moment was caught on camera and has since made its rounds on social media, causing Twitter to gush over the moment and of course, give it the typical meme treatment in pure Twitter fashion.

Check out the sweet moment below.

And of course, some of our favorite memes to go along with it.

The bond we never knew we needed, but now that we have it, we can’t get enough!

But that’s not the only reason Kelly was trending from last night’s event. She looked absolutely stunning as she joined her celeb friends on the carpet, and was sure to share a few flicks with her fans so we could all get an up-close look at the ensemble.

Here, the singer wore a beautiful red and black accented feathery, one-shouldered gown that featured a thigh-high split. The gown is courtesy of @marcellvonberlin and was paired with black leather gloves and a black, thick leather belt. Kelly wore her hair in a high bun with thick wispy bangs that framed her face and accessorized the look with black, strappy heels and minimal jewelry. Looking good!

Regina King, Jay-Z, Kelly Rowland And More Light Up The Red Carpet Of The LA Premiere Of “The Harder They Fall”

*For laughs*Meanwhile Beyonce at home in the mirror plugging her menses with blank Bible pages saying, "I wish he looked at me like that"..💅🤦😂🤣

A proud daughter bursts out laughing while honoring her father and his induction into the Rock & Roll Hall Of Fame. 9-year-old Blue Ivy made a rare appearance in her father Jay-Z's pre-recorded tribute video. The 2021 inductees were honored in a ceremony that aired on HBO on Saturday November 20.
CELEBRITIES・10 DAYS AGO
E! News

Watch: Blue Ivy Carter Shows Off Superstar Dance Moves. Blue Ivy Carter is all grown up and one proud daughter!. The 9-year-old, the eldest of Beyoncé and Jay-Z's three children, made a rare public appearance in a pre-recorded tribute video to her dad played during his induction into the Rock & Roll Hall of Fame last month. The ceremony honoring the 2021 inductees aired on HBO on Saturday, Nov. 20.
CELEBRITIES・11 DAYS AGO
Audacy

Watch Blue Ivy honor her father, JAY-Z, with her own rap skills

Already an icon in the making, Blue Ivy Carter further solidified her status by helping induct JAY-Z, into the Rock & Roll Hall of Fame. Reciting some of his famous lyrics in tribute, proving the apple doesn’t fall far from the famous family tree.
CELEBRITIES・9 DAYS AGO
romper.com

Beyoncé has dropped her latest Ivy Park line but all everyone can talk about are her two best models. The star’s daughters Blue Ivy and Rumi Carter both made appearances in their mother’s latest ad campaign for Ivy Park x Adidas’ Halls of Ivy collaborative collection and absolutely stole the show.
CELEBRITIES・2 DAYS AGO

Like father, like daughter. Widely recognized as one of the greatest rappers of all time, Jay-Z recently got inducted into the Rock and Roll Hall of Fame--and who better to honor him than his firstborn child, Blue Ivy Carter? In a pre-recorded video released over the weekend, the...
CELEBRITIES・10 DAYS AGO
HollywoodLife

Kelly Rowland is back for ‘Merry Liddle Christmas Baby’ on Lifetime. She spoke EXCLUSIVELY with HL about Jacquie and Tyler’s next chapter, a fourth movie, and more. There’s a Liddle baby on the way! Kelly Rowland and Thomas Cadrot return as Jacquie and Tyler in Lifetime’s Merry Liddle Christmas Baby, which premieres on November 27 at 8 p.m. ET. This holiday season, the beloved couple is gearing up for parenthood! HollywoodLife got EXCLUSIVE scoop from Kelly about how Jacquie is handling pregnancy, a fourth movie, and why this Christmas is extra special for her.
MOVIES・5 DAYS AGO
HelloBeautiful

Kelly Rowland’s Husband: Everything To Know About Tim Weatherspoon & Their Love Story

RHUDE‘s Rhuigi Villaseñor offered a first look at the piece he created for JAY-Z‘s Hall of Fame induction. Taking to social media to tease the design, Villaseñor can be seen holding out a cream white leather sleeve of a varsity jacket that features intricate blue embroidery of Hov’s full name, Shawn “JAY-Z” Carter, and the titles of all of his solo studio albums ranging from 1996’s Reasonable Doubt to his 13th album, 4:44. Just above the gartered cuff, the words “Hall of Fame Hov” can be spotted.
APPAREL・9 DAYS AGO
Hello Magazine

Beyoncé is one of the most famous singers in the world, but to Kelly Rowland's son Titan, she's just his aunty. The Destiny's Child star opened up about a sweet story involving her bandmates during an appearance on Today with Hoda & Jenna this week. Ahead of the release of...
CELEBRITIES・8 DAYS AGO
myk104.com

Pharrell Williams has recorded with a who’s who of music, including Beyoncé, Rihanna, Mariah Carey and Kanye West, and he’s worked more than anyone else with one of the new members of the Rock & Roll Hall of Fame, Jay-Z. They began recording in 1999, and their seemingly endless list of hits includes “Frontin’,” “Excuse Me Miss” and “Change Clothes.”
MUSIC・1 DAY AGO
thatgrapejuice.net

The third installment of Lifetime’s ‘Merry Liddle Christmas’ film franchise, ‘Merry Liddle Christmas Baby’ (starring and executive produced by GRAMMY-winning singer Kelly Rowland), aired Saturday night (November 27). And if the viewership figures are anything to judge by, the Liddles have garnered quite the dedicated audience since first arriving on...
MOVIES・19 MINUTES AGO

The art of interviewing is a skill that takes time to perfect, but Jazlyn Guerra a.k.a. Jazzy’s World TV makes it look easy. The 11-year-old reporter from Bushwick, Brooklyn, went viral a few weeks ago after she shared a clip from an interview she did with none other than Jay-Z. Prior to that, she has been sharing clips to YouTube and Instagram of her one-on-one conversations with some of the biggest names in sports and entertainment—and each one is better than the next. The young reporter is so sure of herself, witty and sharp with her questions, that her subjects often give her way more time than they would give to an average reporter.
CELEBRITIES・2 DAYS AGO
HelloBeautiful

Following the news of Virgil Abloh's passing, many celebrities took to social media to share their own statements, offering their love and condolences to Virgil Abloh and his family. From Pharrell Williams to Loni Love, see each celeb's heartfelt message.
BEAUTY & FASHION・4 DAYS AGO
HollywoodLife

Diddy’s girls Jessie and D’Lila showcased their sporty styles as they twinned in blue tracksuits. Diddy’s twin daughters Jessie James and D’Lila Star Combs, 14, proved they are quite the fashionistas in an artsy new Instagram snapshot posted to their joint account on Nov. 29. The duo looked ultra-cool while rocking blue tracksuits with white tops and slate grey New York Yankee ballcaps and two-toned sneakers.
CELEBRITIES・3 HOURS AGO
WWD

Click here to read the full article. Shawn “Jay-Z” Carter’s entertainment company Roc Nation is unveiling its inaugural issue of print magazine Edition in Miami Friday with the help of “Insecure” creator and star Issa Rae and NFTs. The magazine is a part of a partnership with Modern Luxury Media, the publisher of Ocean Drive, Gotham and more, to launch Edition by Modern Luxury, a luxe multimedia platform designed to amplify voices from diverse communities shaping popular culture. As well as a print magazine released six times a year, the platform will consist of a mix of digital, social and experiential activations.More from...
NFL・8 HOURS AGO
HelloBeautiful

Halle Berry Stands By Her Cardi B ‘Queen Of Hip Hop’ Comment: ‘There Can Always Be More Than One’

Halle Berry visited "Jimmy Kimmel Live!" on Monday where she doubled down on her stance that Cardi B is the queen of hip hop.
HIP HOP・16 DAYS AGO
The Weekly Challenger

The Harder They Fall

Regina King, Idris Elba, and LaKeith Stanfield star in ‘The Harder They Fall.’. They’re roughriders. Badasses. Pistol packing outlaws blasting bullets. The setup for this shoot ’em up started with the 2013 short film They Die by Dawn, the brainchild of Jeymes Samuel, aka “The Bullitts.” He’s a British singer-songwriter, producer, and writer/director who is also the brother of the Grammy Award-winning musician Seal.
MOVIES・13 DAYS AGO
myk104.com

Kelly Rowland announces her second children’s book, ‘Always with You, Always with Me’

After giving birth to her second son earlier this year, now Kelly Rowland is publishing her second children’s book, co-written with educator Jessica McKay. Always with You, Always with Me, described as “a loving ode to modern motherhood,” will focus on the relationship between a working mother and her young son.
BOOKS & LITERATURE・14 DAYS AGO
HelloBeautiful

Porsha Williams' long-awaited spin-off reality TV series made its official debut on Nov. 28 and fans had a few mixed feelings.
CELEBRITIES・3 DAYS AGO