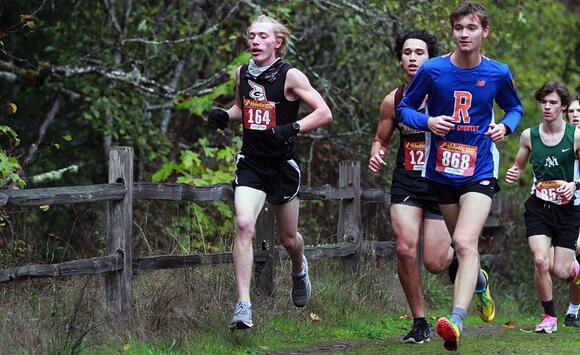 The Gladiators test themselves against a big and talented field at Estacada.

There's never a bad time to test yourself against the best, so that's just what the Gladstone boys cross country team did Wednesday, Oct. 13.

The Gladiators ran to a sixth-place finish in the field of eight teams at the Estacada Invite at McIver Park, their efforts led by junior Paxton Hummel and his eighth-place finish among 53 runners.

"I feel tired, but I beat my previous record by three seconds," Hummel said. "I was in the top 10 the whole time. I'm really impressed with myself for being able to keep up."

In the team scoring, Ridgefield, Washington — the Spuds had the top three individual finishers in the race — finished first with 24 points, followed by North Marion 77, Corbett 94, Molalla 98, Estacada 118, Gladstone 136, Riverdale 142 and Sheridan 171. 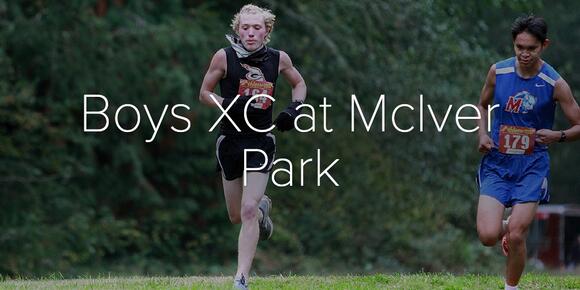 For Hummel, his finishing time of 18 minutes, 33.80 seconds for the 5-kilometer race marked a 3-second improvement over his previous best and left him 25 seconds behind Ridgefield junior winner Liam Rapp's mark of 18:08.90.

"I was just trying to beat my previous record," Hummel said. "Last time (I PR'd), it was pouring hard the whole way and I was slipping, so I was surprised I got it. I'm impressed that I even made a PR."

While the Gladiators are looking ahead to the Tri-Valley Conference district meet in two weeks, Hummel said he is unsure about how the team would fare. The district meet is set for 3:30 p.m. Wednesday, Oct. 27, at McIver Park.

"I'm not sure yet," Hummel admitted, but "if we make it to state, that would be awesome."

Check out the best of the best here, and link to the complete all-star lists for all fall sports.They ran the fastest. They hit the hardest. They scored the most and they won — a lot. These are your Northwest Oregon Conference all-stars for the 2021 fall season. While we cannot publish every one of the various all-league teams in print, you can link to complete lists for each sport below. Here's a snapshot of the very best of the very best from Northwest Oregon Conference sports for the fall 2021 season.A D V E R T I S I...
SOCCER・3 DAYS AGO
Clackamas Review

Check out the best of the best here, and link to the complete all-star lists for all fall sports.They are the best. The fastest, the most dangerous, the highest scoring, the toughest — these are your Mt. Hood Conference all-stars for the 2021 fall season. While we cannot publish every one of the various all-league teams in print, you can link to complete lists for each sport from the sports tab of our website, clackamasreview.com. But here's a snapshot of the very best of the very best from Mt. Hood Conference sports for the fall 2021 season. Football Clackamas first-teamers:...
CLACKAMAS, OR・4 DAYS AGO
Clackamas Review

Bill Kennemer: Thank you to Gladstone, La Grande superintendents for their immediate responseAs the state senator representing Gladstone, many citizens and I were deeply alarmed and troubled to hear of the recent inappropriate and just plain wrong words and conduct at the Gladstone/La Grande High School football game earlier this month. A big thank you goes out to Superintendent Bob Stewart (Gladstone) and Superintendent George Mendoza (La Grande) for their immediate response. As educators should, they both denounced the wrong and reached for the much-needed "teachable moment." The channel is now being opened for positive growth and change. The plans for fact finding and providing opportunities to build and foster relationships offer progress and healing for all of us. Here is an opportunity for all of us to grow. As Winston Churchill's famous statement goes, "Those who fail to learn from history are destined to repeat it." Let's turn this history lesson into a learning experience. Oregon Sen. Bill Kennemer, R-Canby, has also served as a state representative and Clackamas County commissioner. {loadposition sub-article-01}
GLADSTONE, OR・8 DAYS AGO
Clackamas Review

Falcons get three PK goals from Mizael Harris, two scores by Kevin Serrano-Maldonado.The Class 5A state soccer championship game was less a competition and more a coronation for the La Salle boys team. The Falcons — the top-ranked Class 5A team in state — proved as much on Saturday, Nov. 13, when they routed No. 3 Corvallis 5-0 in the title game at Hillsboro Stadium. "We wanted to win so badly, just one more time," said La Salle senior forward Mizael Harris, who scored three goals — all on penalty kicks — and assisted on another in the championship. "I...
CORVALLIS, OR・13 DAYS AGO
Clackamas Review

The Falcons speed past Corvallis 5-0 in the title game at Hillsboro Stadium on Saturday.An unforgettable season for the La Salle boys soccer team ended with a Class 5A state championship Saturday, Nov. 13, as the Falcons earned a 5-0 victory over Corvallis at Hillsboro Stadium. The Falcons ended their season with a record of 16-1-1, while Corvallis finished at 12-4-2. La Salle grabbed a 2-0 lead in the first half off two penalty kick goals by senior Mizael Harris, then added a third PK by Harris and a pair of scores from sophomore Kevin Serrano-Maldonado for the final 5-0 margin. Come back to see full coverage of the game at clackamasreview.com. {loadposition sub-article-01}
HILLSBORO, OR・14 DAYS AGO
Clackamas Review

After trailing 7-6, Jesuit football scored late and added a pick-six to eliminate Clackamas from the 6A playoffs. Trailing 7-6, Jesuit High football finally broke through late against Clackamas to take a lead and added on a pick-six to seal the 19-7 win. The win for the No. 9 Crusaders (10-1) sends them to Class 6A quarterfinals where they will play No. 1 Lake Oswego. For Clackamas, its season ends with a 10-2 overall record with the only other loss coming to No. 4 Central Catholic. {loadposition sub-article-01}
CLACKAMAS, OR・14 DAYS AGO

Follow the schedule and final scores of the OSAA high school football playoffs.The playoffs in Oregon high school football continue on for all classifications. Head to OSAA's website to see the full brackets from each level and keep an eye here for all the latest scores from across the state. All dates and times are 7 p.m. Nov. 12 unless otherwise noted. CLASS 6A Second round Lake Oswego 35, McNary 14; LO 10-1, McNary 7-4 Jesuit 19, Clackamas 7; Jesuit 10-1, Clackamas 10-2 Sherwood 35, West Salem 27; Sherwood 7-4, West Salem 9-2 Central Catholic 48, Mountainside 17; CC 12-0,...
OREGON STATE・15 DAYS AGO
Clackamas Review

The top-ranked Falcons will face No. 3 Corvallis at 1 p.m. Saturday at Hillsboro Stadium.The La Salle boys soccer team is poised to attain its biggest goal. The top-ranked Falcons assured themselves a shot at the Class 5A state championship by beating North Salem 4-0 in their state semifinal at La Salle High School on Tuesday, Nov. 9. They pushed across three goals in the first half and one more in the second to dispatch the Vikings and earn a title-game berth against No. 3 Corvallis at 1 p.m. Saturday, Nov. 13, at Hillsboro Stadium. The Spartans (12-3-2 overall) upset...
HILLSBORO, OR・17 DAYS AGO
Clackamas Review

Clackamas Community College sets sights on its fourth consecutive national championshipIt may be too early in the junior college wrestling season for Clackamas Community College to start talking about making a run at a fourth consecutive NJCAA national championship. Or is it? "No, we work hard every day and that's been our dream since day one — to win a fourth," said Marckis Branford, the Cougars' two-time All-American from Easton, Pennsylvania. "It's only been done once before, I think, so that's something we'd like to do." Actually, the Cougars of Clackamas County are looking to become the fourth team to...
CLACKAMAS COUNTY, OR・16 DAYS AGO
Clackamas Review

Woodburn outlasts Gladstone 1-0 in the semifinals

Early goal from Woodburn's Valdez Vazquez the decider; Gladstone sees 10-game win streak snappedGLADSTONE, Ore.—History has a funny way of repeating itself. It was two years ago that the No. 9 seed Woodburn Bulldogs made the trek to the No. 1 seed Gladstone Gladiators to pull the 2-0 upset in the playoffs enroute to a state finals appearance. In the year 2021, Woodburn, this time the No. 4 seed, made the journey up to Dick Baker Stadium to square off against the No. 1 ranked Gladiators. Once again, the Bulldogs got the shutout win, this time 1-0, and advance...
GLADSTONE, OR・17 DAYS AGO
Clackamas Review

The Falcons come back from a 1-0 deficit and earn a berth in the Class 5A title game.Something had to give. The Tuesday, Nov. 9, Class 5A state semifinal matchup between the La Salle and North Eugene girls soccer teams was akin to the proverbial battle between the irresistible force and the immovable object. And for the longest time, it looked like the immovable force — North Eugene's stellar defense — would win. The Highlanders, who had only been scored on in two earlier games this year, took a one-goal lead late in the first half and held it for...
SOCCER・18 DAYS AGO
Portland Tribune

In the girls meet, Putnam's Lundgren is ninth and the Wilsonville girls place fifth at state. The Northwest Oregon Conference's best showed that they belong among Oregon's best, too. The NWOC's best boys cross country runners and teams — led by 2021 individual champion Logan Law of Milwaukie and team...
WILSONVILLE, OR・20 DAYS AGO
Clackamas Review

Next up, the No. 2 Falcons host No. 3 North Eugene in the state semifinals on Tuesday.The sharks were circling. The La Salle girls soccer team — coming off an 8-0 win its playoff opener — didn't score for almost 25 minutes in its Saturday, Nov. 6, state quarterfinal, but the Falcons said they knew it was only a matter of time. Despite its slow start, second-ranked La Salle scored three times in the first half and once in the second to beat No. 7 Pendleton/Weston-McEwen 4-0 and advance to the state semifinals on Tuesday, Nov. 9. "I felt like...
SOCCER・20 DAYS AGO
Clackamas Review

The Gladiators get a goal from Madison Hill midway through the first half to win.Some days, one goal is all you need. Just ask the Gladstone girls soccer team. The Gladiators, top-ranked in the state among Class 4A teams, managed just one goal in their state quarterfinal contest against Marist on Saturday, Nov. 6, but on this day, that was enough to beat the Spartans 1-0 at Gladstone High School. "I was really nervous until I got that goal," said Gladstone sophomore midfielder/forward Madison Hill, who scored the game's lone goal midway through the first half. "They're such a good...
GLADSTONE, OR・20 DAYS AGO