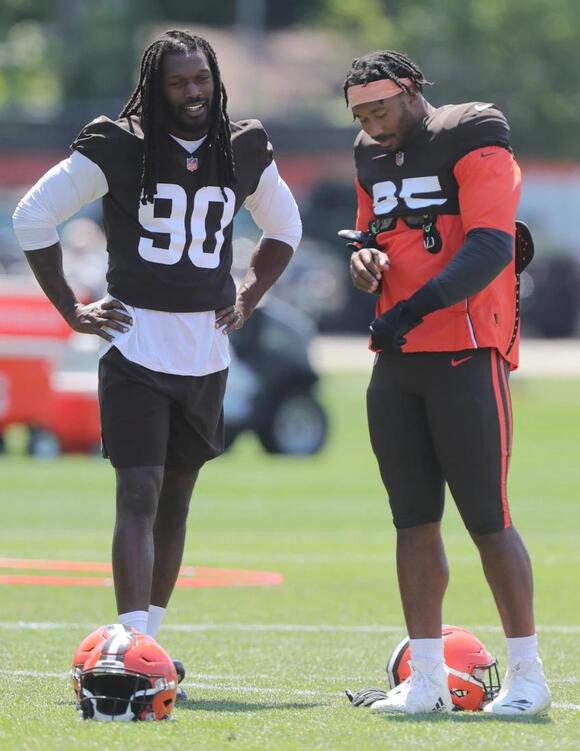 Cleveland’s extensive injury report improved a bit Thursday as Myles Garrett and Jadeveon Clowney returned to practice, but the Browns were still without their backfield. 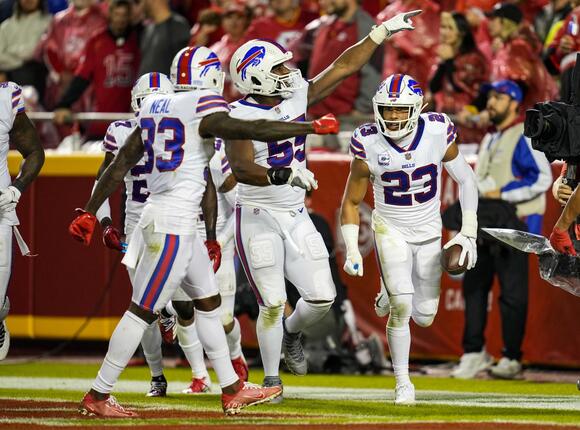 Browns offensive coordinator Alex Van Pelt said Thursday he’s “not really sure” if Wills and Conklin, the starting tackles, would be able to play.

“Hopefully we can get them out (to practice) later in the week, but if not, it’s next-man-up mentality for us,” Van Pelt said.

After a noisy week in Cleveland, Ohio that included the release of star receiver Odell Beckham Jr., many doubted Baker Mayfield and the Browns heading into their week 9 matchup against the Cincinnati Bengals. Myles Garrett wasn’t one of them. According to the All-Pro edge rusher, he pointed to the...
NFL・23 DAYS AGO
ClutchPoints

Nick Chubb speaks out on Baker Mayfield after tough performance for Browns vs. Lions

It’s been a bumpy road for the Cleveland Browns this year. The offense has struggled at times and the team managed to earn an ugly win over the Detroit Lions on Sunday. Nick Chubb balled out but pointed out how Baker Mayfield’s toughness is keeping the squad motivated. According to...
NFL・9 DAYS AGO
FOX Sports Radio

Why the Browns Are Officially Finished With Baker Mayfield

Colin Cowherd explain why he doesn’t think Baker Mayfield will be the quarterback of the Cleveland Browns once his contract runs out with the team after next season.
NFL・1 DAY AGO
baltimoreravens.com

Even though the Ravens and Browns are rivals, and even though they were locked in a classic AFC North brawl on "Sunday Night Football," game still recognizes game. That was the case after Lamar Jackson's 13-yard touchdown pass to Mark Andrews in the Ravens' 16-10 win. Jackson faded all the way back to the 35-yard line before launching the pass to Andrews. As he did, Jackson's arm was hit by Browns defensive end Myles Garrett – the NFL's sack leader.
NFL・1 DAY AGO

Sportsmanship was on full display following a touchdown in Sunday night’s game between the Baltimore Ravens and the Cleveland Browns. Ravens quarterback Lamar Jackson had a rough first half, throwing three interceptions in the second quarter, but he’s come alive in the second half. The Ravens lead the Browns, 13-9,...
NFL・2 DAYS AGO
92.3 The Fan

Browns defensive end Myles Garrett said he has no rift with defensive coordinator Joe Woods, Baker Mayfield will start against the Lions and more notes from Friday.
NFL・11 DAYS AGO
92.3 The Fan

Baker Mayfield returned to practice Thursday, a day after resting injuries to his knees, foot, and left shoulder and he is expected to play Sunday against the winless Lions.
NFL・12 DAYS AGO
Cleveland.com

Myles Garrett on dapping up Lamar Jackson: ‘I dapped him up because I have sportsmanship’

BALTIMORE -- Browns defensive end Myles Garrett couldn’t help but pay some respect to Ravens quarterback Lamar Jackson after Jackson dazzled with a 13-yard touchdown pass to tight end Mark Andrews with 9:48 left in the third quarter on Sunday night. This was no ordinary 13-yard touchdown pass, mind you....
NFL・2 DAYS AGO

“How is this possible”: Twitter goes crazy as Lamar Jackson creates unusual record against the Browns

The Baltimore Ravens suffered a humiliating defeat against the Dolphins. Top stars of the side weren’t able to perform as per expectations. However, we were expecting a strong comeback from the boys and that is exactly what happened. First, they defeated the Bears in a tight encounter, then went past Browns in their latest encounter.
NFL・2 DAYS AGO
ClutchPoints

In Week 10, the Cleveland Browns were obliterated by the New England Patriots. After that game, Myles Garrett was vocal about his critique of the coaching staff. Joe Woods, the defensive coordinator, responded to Garrett on Thursday. According to Jake Trotter, Woods claims “that stuff doesn’t really bother me,” in...
NFL・12 DAYS AGO
USA TODAY

The AFC North portion of the Lions' 2021 schedule comes to a close Sunday against the Cleveland Browns (5-5). Since starting the season 3-1, the Browns have lost four of their last six games, including in blowout fashion to Mac Jones and the New England Patriots in Week 10, 45-7.
NFL・13 DAYS AGO

BEREA, Ohio -- The Browns need to wrap their receivers in bubble wrap this week to get them to the Lions game healthy, but they were a day late on Donovan Peoples-Jones. In the early part of Wednesday’s practice open to the media, Peoples-Jones reached for a pass from Case Keenum and tweaked his groin injury, likely the same issue that kept him out of the 15-10 loss to the Steelers three games ago.
NFL・13 DAYS AGO
Detroit News

Allen Park — The Detroit Lions couldn't be more thrilled with the results of having their starting offensive tackle tandem together on the field for the first time last week. The impact was clear in the 16-16 tie with the Pittsburgh Steelers, as the Lions ran for a season-high 239...
NFL・13 DAYS AGO
FanSided

The New England Patriots are riding a four-game winning streak following their undressing of the Cleveland Browns on Sunday. There were a host of standout performers from the game, but one particular player’s contributions might’ve been glossed over by fans in real time. Believe it or not, we’re talking about...
NFL・14 DAYS AGO
brownszone.com

Prime-time win over Ravens would give Browns new life, hope; Myles Garrett says “we gotta go through them”

BALTIMORE — A win changes everything. The Browns would go from last in the AFC North to a half-game out of first place. They’d break for their bye with momentum, confidence and every goal within reach with five games remaining. The blown fourth-quarter leads to the Chiefs and Chargers would...
NFL・4 DAYS AGO
92.3 The Fan

Browns Notes: Joe Woods says he has no problem with criticism from Myles Garrett, fans

Browns defensive coordinator Joe Woods has taken a beating from fans following their 45-7 loss at New England and after the game, Myles Garrett bemoaned a lack of defensive adjustments plus other notes from Thursday.
NFL・12 DAYS AGO
Cleveland.com

BEREA, Ohio -- Browns defensive coordinator Joe Woods, when asked how he was doing prior to his weekly press conference on Thursday, replied, simply, “I could be better.”. No kidding. The Browns gave up 45 points to the Patriots in Sunday’s loss, 452 yards of offense and 184 on the ground.
NFL・12 DAYS AGO
Akron Beacon Journal

Browns star Myles Garrett says no 'rift' between him and Joe Woods, knows defense's unity is being tested

BEREA — All-Pro defensive end Myles Garrett isn't backtracking from the critical comments he made after the Browns fell 45-7 to the New England Patriots on Sunday. But Garrett made it clear Friday he doesn't have any beef with defensive coordinator Joe Woods, either. “I don’t think there was ever...
NFL・11 DAYS AGO
NBC Sports

Lions left guard Jonah Jackson received an unsportsmanlike conduct penalty in the third quarter Sunday. Afterward, it was revealed that Jackson had insulted Browns defensive end Jadeveon Clowney‘s mother. “I don’t know what to tell you,” Lions coach Dan Campbell said, via Nate Ulrich of the Akron Beacon Journal. “It...
NFL・9 DAYS AGO