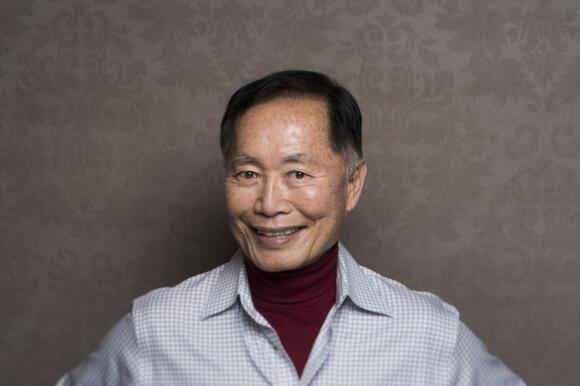 William Shatner's brief trip to outer space this week wasn't the final frontier in his grudge match with former co-star George Takei. If anything, it blazed a new interstellar trail in the stars' rivalry.

Takei, who played Hikaru Sulu to Shatner's Capt. James T. Kirk in the iconic TV series and films, fired the latest blast in the pair's decades-long feud Wednesday. This time, he criticized the 90-year-old's Wednesday flight aboard Jeff Bezos' Blue Origin space capsule, which gave Shatner the honor of being the oldest person to launch into space.

So while he may have felt some weightlessness in space, Takei was sure to bring him down to Earth.

“He’s boldly going where other people have gone before,” Takei, 84, quipped to Page Six at a play opening Wednesday night, riffing on the series' catchphrase (and a number of headlines about Shatner's 10-minute voyage.)

Upon returning to Earth Wednesday, Shatner was moved to tears over the "profound experience" Bezos gave him and was surveying "the enormity and the quickness and the suddenness of life and death."

The outspoken actor and prolific Twitter user then threw even more shade at Shatner's physical fitness and age.

"Ninety years old and it’s important to find out what happens," he added, noting that Shatner's advanced years will "show a great deal more on the wear and tear on the human body" and that "he’ll be a good specimen to study" — a specimen "that's unfit."

Takei has previously accused Shatner of being “very self-centered" and has publicly bickered with his former co-star for years. In his 1994 biography, "To the Stars," Takei accused Shatner of ignoring him on the "Star Trek" set and changing the script for “Star Trek V” so his character wouldn't take command of a spaceship. There was also a very public disagreement over whether Shatner was invited to Takei's 2008 wedding.

Shatner has said he pities Takei and has claimed that "there's a psychosis there" when it comes to Takei and that there's something "festering" in the actor. In his 2011 memoir, "Shatner Rules," he said that their discord was a result of Takei’s unwillingness to play second fiddle on the show.

Seems like neither Trekkie is living up to the show's live-long-and-prosper credo.

William Shatner visits Ticonderoga after his own voyage to final frontier

The iconic actor behind Captain Kirk is in the North Country to visit the Star Trek Set Tour this weekend.
BURLINGTON, VT・15 DAYS AGO
hotnewhiphop.com

It is expected that trips to space will become the new normal and we have already seen celebrities make their way into the far unknown. Jeff Bezos, Richard Branson, and even Star Trek icon William Shatner have visited outer space. They've returned with enlightening stories about what their trips were like, albeit they were also fitted with crew members who helped them during their journey.
AEROSPACE & DEFENSE・14 DAYS AGO
Interesting Engineering

Last month we brought you news that William Shatner, the renowned actor who played Captain Kirk in the show and films of the "Star Trek" franchise had launched into space aboard Blue Origin's New Shepard spacecraft. It was an exciting time filled with promises about space adventures that could involve civilians not just astronauts.
AEROSPACE & DEFENSE・14 DAYS AGO
FanSided

Did You Know?: Leonard Nimoy replaced George Takei on the Simpsons for a silly reasons

The Simpsons had to replace George Takei with Leonard Nimoy in “Marge vs. The Monorail.”. Star Trek fans would cite George Takei and Leonard Nimoy as icons of the franchise, yet another iconic franchise, The Simpsons, had to replace one with other. The Simpsons have had a rough go of it in recent years but early on, especially in the fourth season, the show was turning out iconic episodes after iconic episodes. One of the better ones was “Marge vs. The Monorail”.
TV & VIDEOS・13 DAYS AGO

George Takei to visit the U of U in January

MUSE (My “U” Signature Experience) will welcome Takei as its first national guest for the 2021-22 theme of “Rebuilding” on Jan. 27, 2022. Takei will address students and the university community at Kingsbury Hall beginning at noon and a book signing will follow, said a news release from the U.
SALT LAKE CITY, UT・9 DAYS AGO
Ok Magazine

It's all fun and games until John Lithgow and William Shatner start screaming at each other!. A quirky yet beloved sci-fi sitcom, 3rd Rock from the Sun — which ran from 1996 to 2001 — revolved around aliens that landed on Earth and disguised themselves as a family as they maneuvered their way through a new life, an unknown culture, and what it means to be human.
TV & VIDEOS・9 DAYS AGO
arcamax.com

Michael Strahan is heading to space on the third human-crew flight of Jeff Bezos’ Blue Origin spacecraft. And he’ll do it soon. “In less than three weeks, on Dec. 9, I will be blasting off in the next Blue Origin space launch,” Strahan said Tueday on “Good Morning America,” prompting co-host George Stephanopoulos to interject, “You’re a brave man, Michael.”
AEROSPACE & DEFENSE・5 DAYS AGO
NPR

Getting on a call with William Shatner is not unlike strapping onto a rocket. He's a fast, curious thinker — things move quickly, and you aren't sure exactly where you might end up. Shatner has been releasing music for almost as long as he's been acting, putting out his first album, The Transformed Man, while he was still playing Captain Kirk on the original Star Trek.
MUSIC・3 DAYS AGO

Actor George Takei, most well-known for his role as Lt Sulu in the science fiction series Star Trek, has talked about why he decided to hide his sexuality for so long. Takei said that as a teenager he realised that societal attitudes meant you could not be gay and be hired as an actor in Hollywood.
CELEBRITIES・10 DAYS AGO
Cleveland.com

Willow Smith kicked off her 21st birthday with an epic Halloween party in a costume that made fans lose it. The Whip My Hair crooner looked beyond stunning as she transformed into Brad Pitt’s Fight Club character Tyler Durden for the fete, giving the look a high-fashion twist we won’t soon forget.
BEAUTY & FASHION・26 DAYS AGO

Emily Ratajkowski has explained why Pete Davidson is seen as attractive to so many women and she has given him a pretty good review. Speaking on Late Night With Seth Meyers to promote her new memoir, the model waxed lyrical about the comedian’s charms and questioned why some people don’t understand how he is such a successful dater.
CELEBRITIES・17 DAYS AGO
BET

Willow Smith is officially 21 and her parents Will Smith and Jada Pinkett Smith stopped by their respective Instagram accounts to wish their daughter a happy birthday. Celebrating her born day on Halloween Sunday, Will shared a video of him reading an excerpt of his upcoming memoir to Willow about the story of her birth and how she arrived a few weeks earlier than her expected due date.
CELEBRITIES・26 DAYS AGO
Closer Weekly

Since his rise to fame on The Andy Griffith Show, Ron Howard has gone on to dominate Hollywood with some of the biggest blockbuster films. The director and actor got his start in show business when he was just 5 years old. His net worth after over 60 years in the entertainment industry will blow your mind.
CELEBRITIES・12 DAYS AGO
Us Weekly

Going method. In Will Smith’s forthcoming Will memoir, he’s getting candid about his past and current relationships. During the 53-year-old King Richard star’s first marriage to ex-wife Sheree Zampino — with whom he shares 28-year-old son Trey — the Pennsylvania native claimed he “fell in love” with Stockard Channing while they worked together on Six Degrees of Separation in 1993.
CELEBRITIES・24 DAYS AGO

Pete Davidson has turned into quite the Casanova, so how does he pick who to date next?. In Tuesday’s episode of iHeartRadio’s River Cafe Table 4 with Ruthie Rodgers, the Saturday Night Live star admitted that he’s figured out the best way to determine if a girl is worth a second date and how to make himself look good in the process. Sharing his top-notch dating tip, the comedian expressed:
CELEBRITIES・11 DAYS AGO
ComicBook

Safe House, a crime thriller starring Denzel Washington and Ryan Reynolds, has found a great second life on Netflix as of late, putting up solid streaming numbers and reaching new viewers nearly a decade after its theatrical debut. This week, another one of Washington's films is making the move to Netflix, and there's a good chance it could see a similar kind of popularity with viewers thanks to the star power of Denzel.
MOVIES・27 DAYS AGO
thedigitalfix.com

Two of Arnold Schwarzenegger’s five children have followed in his acting footsteps – Patrick Schwarzenegger and Joseph Baena. And five years ago, Baena recreated one of his father’s most memorable scenes from 1991’s Terminator 2: Judgement Day. Now on the set of his new movie, Baena is once again channeling his famous father.
MOVIES・1 DAY AGO