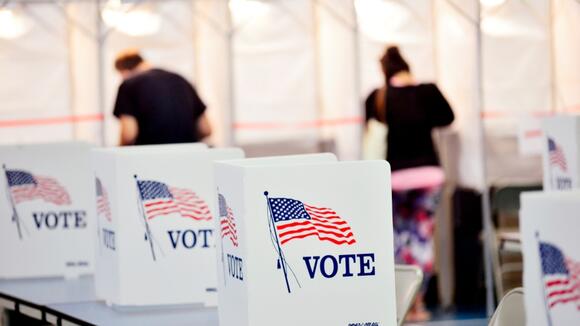 ELMIRA, N.Y. (WETM) – Election Day 2021 is less than three weeks away and New Yorkers are facing more than just choosing candidates when they head to the polls in November. Every year there are a series of questions the voters get to voice their opinions on. Ultimately, these questions will be accepted or denied as amendments to the New York State Constitution . These questions begin in the N.Y. Assembly and Senate.

“The process requires the legislature to pass the question or amendment proposal in two concurrent legislatures,” Assemblymember Phil Palmesano told 18 News. “After that happens, it goes to the voters for their approval or denial.”

This years questions were proposed and passed by the Legislature in the 2019 and 2020 session. Now, they appear on the 2021 ballot. There are five proposals on the table this year, where New Yorkers have the direct power to make changes with the check of a box.

“We’re being asked to make law instead of electing representatives to make the law on our names,” Professor Grant Reeher, faculty at the Maxwell School of Citizenship & Public Affairs at Syracuse University, said.

New York’s redistricting process is at a standstill right now. In 2014, voters adopted an amendment, which eliminated partisan influence on the redistricting process. That law allows for a bipartisan commission to be created to develop redistricting maps. Once the maps were created, it would go to a vote in the Legislature and a two-thirds majority was needed to pass it. This year during the map drafting process, the commission was unable to come to an agreement on the two proposed maps: one proposed by the Democrats and one by the Republicans.

According to Assemb. Palmesano, the 2021 amendment would allow for partisan influence on this process. Simply put, the proposed amendment would change how the Redistricting Commission votes and only require a simply majority in the Legislature to pass new redistricting protocols.

“If one party controls the legislature, then all they need is a simple majority to approve the redistricting that would seem to strengthen partisan redistricting possibilities,” Professor Reeher added.

Several lobbyist groups have opposed this amendment, saying it creates partisan “gerrymandering”, including the Citizens Union and League of Women Voters .

Citizens Union recommends a no vote on Question 1, which would make changes to the redistricting process in New York State, just weeks before the constitutional deadline for drawing new legislative boundaries. This amendment contains a number of provisions, but Citizens Union is most concerned that it would remove the protections that ensure no one political party could dominate the redistricting process.

Other groups say this amendment is necessary to put districts first rather than politics.

This fall, New Yorkers can Vote Yes on three statewide ballot proposals for a stronger democracy while dramatically increasing our freedom to vote. While other states aggressively restrict access to the ballot, New York will send a message to the rest of the country, because everyone should have a say in New York.

Questions three and four have to deal with eliminating the voter registration requirement, which says voters must register 10 days prior to an election.

“It certainly could create a logistic issue. I think that the state board is going to have to obviously come up with guidelines,” Chemung County Board of Elections Republican Commissioner Sperry Navone said.

During the COVID-19 pandemic, many states and counties turned to no-excuse absentee voting to ensure everyone could vote and feel safe while doing so. Chemung County received 7,000 mail-in ballots last year. Before COVID, the would average 2,000 per election year. This dramatic increase prepared the Board of Election for this potential change.

“If we are tasked with that responsibility, we’re going to fulfill it,” Commissioner Navone said.

29 states and the District of Colombia have no-excuse absentee voting and five states have all-mail elections. New York would be catching up to some of the bigger states, according to Professor Reeher.

“It gets us closer to basically allowing anyone to mail their vote down, which is again what a lot of other states have done,” Professor Reeher continued.

While people may disagree on the questions and the results, our experts agree that voting in this election is just as important as ever before.

“Make sure your voice is heard and please vote,” Assemb. Palmesano concluded.

Voters can request an absentee ballot until Monday, October 18. Early voting begins October 23 and runs through October 31 at select polling locations. Election Day is November 2 and to find a polling place near you click here .

‘I love what you love’: Meet the new Elmira 2nd District Councilman

The Elmira City Council has appointed a new District 2 councilman to fill the seat until January 2024 after former Councilman Brent Stermer won a seat on the Chemung County Legislature in November 2022, leaving his City seat vacant.
ELMIRA, NY・7 HOURS AGO
WETM 18 News

ALTOONA, Pa. (WTAJ) — Sheetz is making headlines after it was revealed that they may be using a person’s bad teeth to decline employment based on a policy in their handbook. The unusual policy is tucked away in the company’s employee handbook, according to Business Insider, which obtained a written version of the policy. The […]
TIOGA COUNTY, PA・6 HOURS AGO
WETM 18 News

BATH, N.Y. (WETM) – The Steuben County Legislature voted to expand the definition of a “hotel” for local rental businesses, saying it will let the county collect the same taxes as it does on businesses traditionally considered hotels. At the Jan. 23, 2023 Legislature Meeting, legislators voted to amend Local Law 3 from 1987. According […]
STEUBEN COUNTY, NY・2 DAYS AGO
WETM 18 News

BATH, N.Y. (WETM) – Steuben County Officials voted to pass two laws that, together, raise the income limit threshold for seniors and those with disabilities to be exempt from some property taxes. The Steuben County Legislature voted in its Jan. 23, 2023 meeting to pass Local Laws 8 and 9 for 2022. These laws will […]
STEUBEN COUNTY, NY・2 DAYS AGO
WETM 18 News

What’s going on with the ‘Welcome to Elmira’ sign?

ELMIRA, N.Y. (WETM) – It’s going on two years since the sign that welcomes drivers into the City of Elmira was defaced, and there has been little work done to repair it. However, local officials say they are looking at options to not just repair the time-worn sign, but replace it altogether. After the Jan. […]
ELMIRA, NY・8 HOURS AGO
WETM 18 News

DISCLAIMER: The opinions and views expressed in “Political Pundit Night” belong to its presenters and are not those of, Nexstar Broadcasting, Inc., MyTwinTiers.com, this station, or their affiliates or employees. Hour 1 Hour 2 Full Stream Video Dr. Coleman’s Thirtieth Political Pundit Night–a live cybercast–will take place tonight, from seven to nine, exclusively in this post. Black pundits and leaders […]
ELMIRA, NY・1 DAY AGO
WETM 18 News

BorgWarner to close Ithaca plant by end of 2024

ITHACA, N.Y. (WSYR-TV) — BorgWarner automotive manufacturer will be closing their valvetrain production facility and the valvetrain research technical center located on Warren Rd, Ithaca, NY, a BorgWarner spokesperson confirmed to NewsChannel 9. According to the company, the closure will take place in 2024 and all activities will be consolidated into existing BorgWarner facilities by […]
ITHACA, NY・1 DAY AGO
WETM 18 News

SAYRE, Pa. (WETM) — The Bradford County District Attorney’s office has announced the sentencing of a Sayre man for an assault that took place back on January 6, 2022. According to the sentencing, 67-year-old Mark Leonard was sentenced to 8 to 24 months inside a Pennsylvania State Correctional Facility for the offense of Simple Assault, […]
SAYRE, PA・3 HOURS AGO
WETM 18 News

ELMIRA, N.Y. (WETM) – January is firefighter cancer awareness month. Occupational cancer is the leading cause of line-of-duty deaths in the fire service. The International Association of Fire Fighters (IAFF) is an organization that supports more than 333,000 full-time professional firefighters and paramedics. Each year in September, the IAFF honors the sacrifices made by IAFF […]
WAVERLY, NY・2 HOURS AGO
WETM 18 News

ELMIRA N.Y. (WETM) – Ahead of its biweekly meeting, the Elmira City Council gathered to discuss the agenda, which includes a controversial topic regarding the public’s safety. Although few residents attended, some questioned the Flock Safety cameras being installed in the city and the concern for residents’ privacy, including 1st District Councilman Nick Grasso. “Elmira […]
ELMIRA, NY・1 DAY AGO
WETM 18 News

NICHOLS, N.Y. (WETM) – Firefighters in Tioga County got an early start to the day with a storage building fire. All the details of the incident have not been confirmed at this time, however, what we know right now is that around 4:30 am firefighters were called to an address on Cole Hill Rd. in […]
TIOGA COUNTY, NY・10 HOURS AGO
WETM 18 News

The human trafficking forum that was scheduled for tonight has been rescheduled.
ELMIRA, NY・2 DAYS AGO
WETM 18 News

Watkins Glen, N.Y. (WETM) – On Thursday, The Harbor Hotel hosted it’s the 11th annual Fire and Ice Celebration in Watkins Glen with the party continuing this weekend. Guests can look forward to having a chill experience on the patio with 32,000 pounds of ice carved into sculptures, an Ice bar, and martini luges. There […]
WATKINS GLEN, NY・22 HOURS AGO
WETM 18 News

BATH, N.Y. (WETM) – One man is dead after a car crash in Steuben County late Tuesday night, according to police. New York State Police out of Bath confirmed that officers responded to a fatal motor vehicle crash around 11:23 p.m. on January 24, 2023. NYSP said that 42-year-old Shane Oakley from Bath was the […]
CAMPBELL, NY・2 DAYS AGO
WETM 18 News

HORSEHEADS, N.Y. (WETM) — New York State Police have reported the arrest of an Addison man after an event that took place on Monday. According to police, 26-year-old Chevis G. Sargent, of Addison was arrested and charged with Rape in the 1st Degree, a Class B Felony. The charge stems from an investigation into a […]
ADDISON, NY・2 DAYS AGO
WETM 18 News

ERIN, N.Y. (WETM) — For those looking to participate in some winter activities in the coming months, the Chemung County Department of Buildings and Grounds has announced that Park Station is open for recreational ice fishing and ice skating. According to the release, Park Station will be open from 8 a.m. to 4:30 p.m. daily […]
ERIN, NY・1 DAY AGO
WETM 18 News

ELMIRA, N.Y. (WETM) – It’s time for another edition of 18 Sports Flashback. On this next segment, we go back to 1977 and the days of WETM-TV on Hawley Hill in Elmira. That year, two icons of WETM-TV conducted an interview that was captured in one special image. Longtime 18 News anchor Bruce Flaherty and […]
ELMIRA, NY・3 DAYS AGO
WETM 18 News

SAVONA, N.Y. (WETM) – Crews responded to a serious fire at a thrift store in Savona Tuesday afternoon. Reports of a fire at Hillview Acres flea market on Rt. 226 first came into 18 News around 2:00 p.m. on January 24. Photos from a reporter on the scene showed serious damage to the building and […]
SAVONA, NY・3 DAYS AGO
WETM 18 News

ELMIRA, N.Y. (WETM) – The baseball dream is now a reality for Horseheads Connor Godwin. Now, it’s time to take it even further. Godwin, who signed a free agent contract with the Los Angeles Dodgers farm system last year, aims to keep improving this offseason. The big right-handed pitcher is putting in the work after […]
HORSEHEADS, NY・2 DAYS AGO