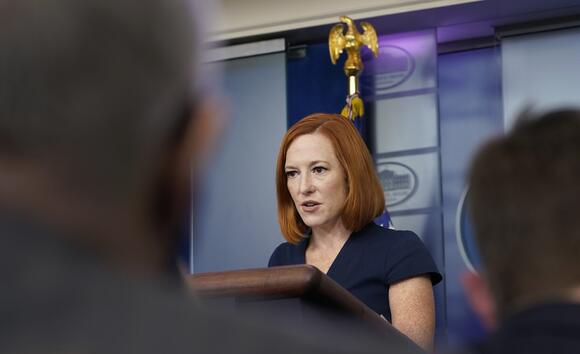 The White House declined to tip the scales as the Justice Department weighs whether to bring criminal contempt charges against former President Donald Trump allies who have so far refused to cooperate with the House Jan. 6 Select Committee.

The White House also shrugged off concerns it is setting a dangerous precedent after it decided not to assert executive privilege over documents and records that Trump requested be kept secret as part of the congressional investigation.

"This president has no intention to lead an insurrection on our nation's Capitol,” press secretary Jen Psaki told reporters Thursday.

Instead, Psaki reiterated that Jan. 6 was “an incredibly dark day” for the country’s democracy. Democrats, Republicans, and members of the public without a political affiliation should want to “get to the bottom” of what happened when a pro-Trump crowd mobbed the Capitol Building to postpone the certification of the 2020 election results, according to Psaki.

“If you look back at past presidents, Democratic and Republican, there really isn’t a precedent for what we’re talking about with this select committee,” she said.

But Psaki did promise to keep disclosing executive privilege decisions given they are being made on a case-by-case basis.

The Jan. 6 committee will vote next week on whether to pursue criminal contempt charges against former Trump White House chief strategist Steve Bannon. If successful, the full House will consider the measure before Speaker Nancy Pelosi refers the matter to the Justice Department.

Former White House chief of staff Mark Meadows, deputy chief of staff Dan Scavino, and Defense Department official Kash Patel had also been subpoenaed to appear before the panel this week. Meadows and Patel have been working with lawmakers, while Scavino was offered an extension after a delay in being served.

The White House last week ordered the National Archives to release information requested by the Jan. 6 committee. Counsel Dana Remus, in a letter published this week, told the presidential record-keepers it is not “in the best interests” of the country to hold on to the trove of roughly 40 documents.

It's amazing how the Obiden and Psaki like to blame everything on Trump.... If you look at the state of this country right now,All of this has happened since he's been in office.

It’s been done before, limited to relevance to an investigation. Nixon tapes, Reagan papers and meetings, Clinton appointment books. Leading to an resignation, a scapegoat, and an impeachment.

The White House declined to rule anything out in response to Russian advances along Ukraine's border, including some form of military action.
POTUS・16 HOURS AGO
WashingtonExaminer

The White House said Iran’s approach in the Vienna nuclear talks showed the regime was not committed to returning to the bargain that forced sharp limits on its nuclear fuel production in exchange for a lifting of sanctions.
POTUS・15 HOURS AGO
Rolling Stone

The House Select Committee to Investigate the Jan. 6 Attack on the U.S. Capitol has been busy. In the five months since the probe was launched, the committee has issued dozens of subpoenas to high-profile members of former President Trump’s circle, as well as a smattering of other MAGA-affiliated figures involved in the effort to overturn the results of the 2020 election. The process has been fraught for a number of reasons, but revelations that have emerged from Rolling Stone’s conversations with cooperating sources indicate the committee could be sitting on a mountain of material — material that could clarify what...
CONGRESS & COURTS・23 HOURS AGO

John Eastman is the second witness who has invoked or plans to invoke the Fifth Amendment in response to a January 6 committee subpoena.
PRESIDENTIAL ELECTION・20 HOURS AGO
Fox News

Former President Donald Trump tore into President Joe Biden in a wide-ranging interview Thursday, suggesting that the administration is "knowingly" destroying the country and is distrusted by the American people. During an appearance on "Fox & Friends," Trump shot back at the president over his 2020 comments, where he suggested...
PRESIDENTIAL ELECTION・1 DAY AGO
The Independent

Symone Sanders, the chief spokesperson and senior adviser to vice president Kamala Harris, is leaving the White House at the end of the year.The 31-year-old had served the Joe Biden administration for three years, beginning with the 2020 presidential campaign. Ms Sanders was also the national press secretary for senator Bernie Sanders’ 2016 presidential campaign."Symone has served honourably for three years," a source familiar with the matter told CNN. "The president and vice president are grateful for Symone's service and advocacy for this White House. She is a valued member, a team player, and she will be missed. We are...
PRESIDENTIAL ELECTION・2 DAYS AGO
Washington Post

President Donald Trump willfully deceived the American people about the pandemic, the gravest public health catastrophe in a century. He knew the coronavirus was highly transmissible early on, but concealed it. He wrongly claimed that rising case numbers resulted from more diagnostic testing. He made a false assertion that doctors were inflating the death toll from covid-19 to “get more money.” There were so many other deceptions.
POTUS・1 DAY AGO

"It'd be very difficult for him to maintain ‘I can't speak about events to you, but I can speak about them in my book,’” said Rep. Adam Schiff.
U.S. POLITICS・1 DAY AGO
WashingtonExaminer

A viral video intended to showcase Vice President Kamala Harris that instead made news for featuring paid child actors was produced by a company called Sinking Ship Entertainment. Now, Harris’s own ship appears to be taking on water, and her aides are headed to the lifeboats.
U.S. POLITICS・1 DAY AGO
WashingtonExaminer

Ex-Trump lawyer John Eastman plans to plead the Fifth to the Jan. 6 committee

John Eastman, an attorney who aided then-President Donald Trump in his efforts to overturn the results of last year’s presidential election, plans to invoke his Fifth Amendment rights in the Jan. 6 select committee’s investigation of the events leading up to the violent riot at the U.S. Capitol, according to a letter from his attorney.
PRESIDENTIAL ELECTION・18 HOURS AGO
WashingtonExaminer

Rachel Maddow shares part of a public transcript from the January 6th Committee's attempt to depose former DOJ official Jeffrey Clark in which it is revealed that the letter Clark sent to pressure Georgia to overturn Donald Trump's election loss contained document metadata from the White House Communications Agency.Dec. 4, 2021.
GEORGIA STATE・7 HOURS AGO
The Independent

The largest newspaper in Missouri has called for one of the state’s US senators to be promptly investigated by a congressional panel over his alleged role in the Jan 6 riot at the US Capitol.More than 10 months after the Senate ethics committee said it was to probe the actions of Missouri’s Josh Hawley and Texas’s Ted Cruz for their alleged encouragement to supporters of Donald Trump seeking to overturn the 2020  election, there has been little outward sign of progress.Several times, however, both Mr Cruz and Mr Hawley have defended their actions that day, with the Missouri senator...
ADVOCACY・3 DAYS AGO
WJBF

The House on Thursday voted to pass a short-term spending bill to fund the government through mid-February, as lawmakers work quickly to avert a shutdown on Friday.
CONGRESS & COURTS・1 DAY AGO
CNBC

Over four years in the White House, President Donald Trump proved exceptionally adept at using his office to manipulate the legal system. But the Constitution gives no role — or powers — to ex-presidents. The result is that Trump’s run of evading accountability may finally be ending, as most recently shown by an appellate court’s skepticism Tuesday toward his attempt to block the House Jan. 6 Committee investigation.
PRESIDENTIAL ELECTION・2 DAYS AGO
Newsweek

To date, Trump has made at least four assertions of executive privilege since leaving office in an attempt to block the release of sensitive information.
POTUS・3 DAYS AGO
WashingtonExaminer

Former President Donald Trump is expected to cast a long shadow over the midterm elections, but his increasing involvement in the Senate and gubernatorial races in Georgia, a state he narrowly lost in 2020, is raising questions about how helpful he will be to Republicans.
GEORGIA STATE・1 DAY AGO
Newsweek

In this daily series, Newsweek explores the steps that led to the January 6 Capitol Riot. On December 1, the dam finally broke. Attorney General William Barr invited Associated Press reporter Mike Balsamo to lunch, telling him on the record that he was breaking with President Donald Trump. "Disputing President...
PRESIDENTIAL ELECTION・3 DAYS AGO