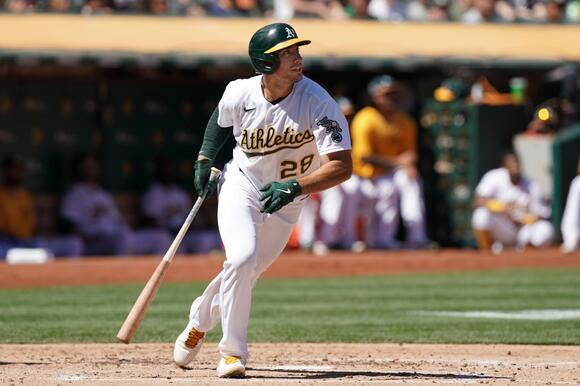 Of all the positions the Yankees need to address this offseason, first base is among those with the most question marks.

Will the Yankees re-sign Anthony Rizzo? Could New York give the starting job back to Luke Voit?

Both of those two scenarios have their pros and cons. Voit led the league in home runs two seasons ago. Even if he missed quite a bit of time during his injury-plagued campaign in 2021, the production was still there when he was healthy.

Rizzo fit right in after he was acquired before the trade deadline, flashing his elite defense and ability to put the ball in play, but he's going to cost some money in free agency.

So, what if there was a third option? Former general manager Jim Bowden has the solution.

Here's Bowden's proposal, via The Athletic:

Oakland would control all three of its acquired players for three more years for a lot less money than Olson, who’s controllable for only two more seasons. The A’s should be able to continue to contend, as I expect both Torres and Voit will have bounce-back years. The Yankees, meanwhile, get a Gold Glove first baseman in Olson, who is only 27 years old and coming off a year where he hit 39 home runs while playing half of his games at the spacious Oakland Coliseum. Imagine what he could do at Yankee Stadium in-between Aaron Judge and Giancarlo Stanton in the Yankees’ lethal lineup.

First, let's state the obvious. Olson would be a huge get for the Yankees.

Olson's career numbers in the Bronx are tremendous. The lefty has slashed .368/.442/.763 with a 1.205 OPS, four home runs and eight runs scored in nine games at Yankee Stadium.

As Bowden alluded to, imagine the type of production Olson would have in a full season in pinstripes, hitting in the middle of a lineup featuring Aaron Judge, Giancarlo Stanton and Joey Gallo.

Olson does strike out a lot, but he certainly profiles as an upgrade from Voit. He's already won a Gold Glove Award at first, his walk rate is elite, he hits the ball hard, consistently finds barres and he's durable.

That in mind, why would Oakland say yes to a trade like this? Well, they probably wouldn't.

Voit's stock is low after four trips to the injured list. Domingo Germán has his history of domestic violence off the field and pitched to the tune of a 4.58 ERA over 22 appearances this year. And as much as Gleyber Torres has plenty of potential, he battled inconsistencies at the plate again this year, needing to move to second base after struggling at shortstop.

Bowden believes Voit and Torres will bounce back in 2022. Does Oakland?

Surely it would take a blockbuster return for the Athletics to part ways with their superstar—perhaps they would push to include one of New York's top prospects in a trade like this. Then again, Olson is inching closer to free agency (he'll be a free agent in 2024) and if the organization wants to recoup some value now before letting him walk, this offseason would be the perfect time.

when voit was playing full time he was great but once he was designated to do he wasn't hitting as well but still a valuable player. why between voice and Rizzoli do you need to trade for olson.

The Yankees are sending an infielder to LA. On Monday, the team reported Tyler Wade has been traded to the Angels. “The New York Yankees today announced that they have traded INF/OF Tyler Wade to the Los Angeles Angels,” the team announced on social media. The trade is for a...
MLB・5 DAYS AGO
FanSided

Before he reaches free agency next season, New York Yankees right fielder Aaron Judge clarifies his desire to stay in New York for the rest of his career. Ever since he debuted for the team in 2016, Aaron Judge has had an illustrious career with the Yankees. He began his...
MLB・12 DAYS AGO
93.7 The Fan

According to multiple reports, the Pirates have picked up a former New York Yankees outfielder off waivers. Fan Pirates insider Jason Mackey of the Post-Gazette says that the Pirates claimed Greg Allen.
MLB・22 DAYS AGO
NJ.com

The New York Yankees have been heavily connected to Oakland Athletics star first baseman Matt Olson, but that doesn’t guarantee general manager Brian Cashman will strike a deal. Of course, acquiring Olson would be a luxury, given he is coming off a season where he recorded a .271 average with 39 homers and 111 RBIs. He earned his first All-Star appearance in 2021, and given his lefty bat at Yankee Stadium, he could crack 40 homers for the first time in his career wearing pinstripes.
MLB・10 DAYS AGO
NJ.com

A familiar name is back on the market. The Orange County Register reports the Los Angeles Dodgers designated outfielder Billy McKinney for assignment last week. MLB clubs faced a Friday deadline to set their 40-man rosters ahead of next month’s Rule 5 Draft. If McKinney passes through waivers, he could...
MLB・5 DAYS AGO
InsideThePinstripes

As baseball's hot stove heats up this offseason, with the General Managers Meetings kicking off this week, there's one possible blockbuster trade that Yankees fans need to keep an eye on. New York has already had internal discussions about a possible Matt Olson trade with the Oakland Athletics, according to...
MLB・18 DAYS AGO
FanSided

5 players the Yankees should target in free agency

The New York Yankees should have clear priorities in this free agency. Even as Major League Baseball nears the eleventh hour before the current labor agreement expires, teams are acting like it’s business as usual. Per usual, the New York Yankees are no exception. That’s right, the GM Meetings are...
NFL・14 DAYS AGO
Dodgers Nation

The Dodgers are going to always be linked to big names on the market. That sort of comes with the territory of being one of the most financially stable teams in baseball along with their expertise in developing young players. So when Jim Bowden linked Matt Olson to the Dodgers...
MLB・7 DAYS AGO
NJ.com

The MLB rumor mill is buzzing with the Oakland A’s dangling All-Star third baseman Matt Chapman as offseason trade bait. So MLB Trade Rumors came up with a list of seven trade partners who might want to deal for Chapman. Let’s start with the New York Yankees. The infield right...
MLB・12 DAYS AGO
NJ.com

Billy Eppler, groomed by the Yankees before sitting and failing in hot seat for the Los Angeles Angels, was offered the Mets’ GM job on Monday, Ken Rosenthal of the Athletic reported. The job will be Eppler’s if the sides work out contract terms, Joel Sherman of the New York Post added.
MLB・11 DAYS AGO

The Yankees declined Joely Rodríguez’s $3 million option on Sunday, sending the left-handed reliever to free agency. Rodríguez, acquired from the Rangers in the Joey Gallo deal last season, will receive a $500,000 buyout after pitching rather well for New York. The cross-firing 29-year-old joined the Yankees with a 5.93 ERA over 27.1 innings with Texas, but he lowered that mark to 2.84 across 19 frames with the Yankees. New York used the groundball-heavy pitcher as more of a lefty specialist, and he cut back on his walks following the trade.
MLB・19 DAYS AGO
InsideThePinstripes

With shortstops poised to be a focal point of the Yankees’ offseason, Baseball America has ranked three among the organization’s top 10 prospects. Anthony Volpe (No. 1) and Oswald Peraza (No. 2) have been written about plenty this offseason, with some wondering if New York will pass on this winter’s star-studded free agent class in favor of promoting one of the farmhands in the near future. Both are coming off stellar seasons, but Volpe, 20, has not played above High-A. Peraza, 21, played just eight games at Triple-A in 2021.
MLB・25 DAYS AGO
InsideThePinstripes

The Yankees lost three players to waivers on Friday. Outfielders Greg Allen and Tim Locastro were claimed by the Pirates and Red Sox, respectively, while SS Andrew Velazquez was picked up by the Angels. Allen played in 15 games for New York in 2021, but he made an impact during...
MLB・22 DAYS AGO

After another premature postseason exit, the Yankees have some work to do this offseason. Everyone knows New York is going to address the shortstop position this winter. With several superstars available, and Gleyber Torres moving to second base, it's just a matter of which big name general manager Brian Cashman elects to pursue.
MLB・23 DAYS AGO
InsideThePinstripes

Jameson Taillon is on the mend. The Yankees right-hander underwent ankle surgery on Thursday. Taillon tore a tendon in his right ankle in September, which hindered him down the stretch. Now the two-time Tommy John recipient is ready to take on another rehab. “So excited that this ankle is fixed!...
MLB・29 DAYS AGO
InsideThePinstripes

The Yankees are expected to be highly active on the free agent market this winter, and several predictions have already matched them with a few big names that will be available. Recently, Ken Davidoff of The New York Post ranked the Top 40 free agents this offseason and gave his...
NFL・18 DAYS AGO
InsideThePinstripes

Although Yankees general manager Brian Cashman was looking to upgrade at the shortstop position at the trade deadline, he admittedly didn’t try hard enough. In his end of the season press conference, Cashman acknowledged the elephant in the room, that shortstop is a major area of need since Gleyber Torres couldn’t cut it there (18 errors in 2021).
MLB・25 DAYS AGO