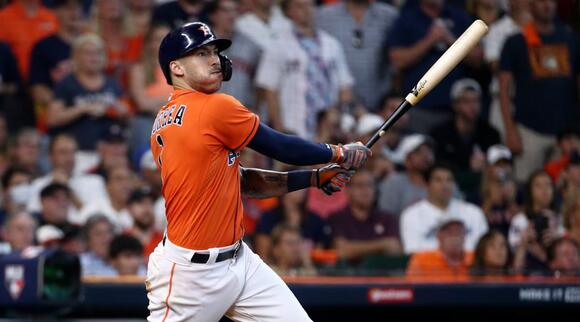 Houston and Boston each have a title in the last four years. Which team will win the ALCS and compete for another?

The Astros host the Red Sox in Game 1 of the ALCS on Friday night.

The Astros punched their ticket to their fifth straight ALCS on Tuesday, handily ousting the White Sox in just four games. They will face the Red Sox, who upset the 100-win Rays by walking it off in Game 4. Fireworks? Plenty more in store.

The Astros are the favorites and likely should be, as they had the better record and led the league in batting average, runs scored, RBIs and on-base percentage (OBP). Houston also leads the league with a .273 average with runners in scoring position.

To put it simply: They don’t whiff, they put men on the bases and they score them. They are a pesky team that doesn’t roll over. They take their walks, they hit it in the gaps and they also have power.

It’s tough to find a soft spot in this lineup.

The Astros’ rotation is not as dominant as in years past, but it still can get the job done with Lance McCullers Jr. (0.84 ERA) leading the way against the White Sox.

Framber Valdez, Luis Garcia and Jose Urquidy round out the starting options for Houston, while Zack Greinke, Kendall Graveman and Ryan Pressly are all available out of the bullpen. Unfortunately for Houston, McCullers was pulled early from his last start due to forearm tightness and may miss the ALCS.

If Houston is without McCullers, bettors could find better odds for the Astros in a series that is more evenly matched.

The Red Sox have surprised all year and should not be underestimated. Let’s face it: They have a flair for the dramatic in postseason play. The Red Sox have already pulled off two upsets: first, beating the favored Yankees in the Wild Card game, and then upsetting the heavily- favored and top-seeded Rays.

However, Tampa Bay’s exit provided the Astros with home-field advantage.

Offensively, the Red Sox are also a juggernaut. They are top three in batting average, top five in runs scored and RBIs and top seven in OBP. They have a 22.6% strikeout rate, ranking in the top-third in the league.

Their lineup should never be underestimated with Kyle Schwarber at leadoff, followed by Kike Hernandez, who delivered the walk-off sacrifice fly against Rays in Game 4. Rafael Devers and Xander Bogaerts have both been clutch and have power to spare.

Much like the Astros, any team that has the luxury of batting a hitter like J.D. Martinez in the seven spot is a force to be reckoned with.

Boston’s pitching is perhaps the shakiest of the remaining teams. Red Sox ace Chris Sale did not look sharp in Game 2, lasting just one inning while allowing five runs, including a grand slam by Jordan Luplow. Sale may be used as a starter or out of the bullpen during this series. Manager Alex Cora has yet to show his hand.

Nate Evoladi will likely start Game 1 and Eduardo Rodriguez will also start. Both pitchers had terrible regular season outings vs. the Astros, but have looked good in postseason play. Nick Pivetta will also round out the rotation.

The Red Sox bullpen has mostly been excellent in the postseason.

As far as managing goes, I give the nod to Boston. Cora knows how to manage a pitching staff and he knows the Astros inside and out. After all, he was the Astros’ bench coach when they won the 2017 World Series.

Dusty Baker, on the other hand, continues to questionably manage his pitching staff and the 72-year-old is still looking for his first World Series win.

I expect plenty of fireworks and a lot of overs in this series. I also expect it to go at least six games. But here’s the x-factor: Don’t underestimate the revenge tour narrative for Houston. We saw what the Astros unleashed on the White Sox after some challenging comments from Ryan Tepera. This lineup is fully healthy, and postseason leader Carlos Correa is looking for a big contract this offseason.

I predict the Astros have another odd-numbered year victory in a high-scoring series.

Get fantasy and betting analysis in your inbox by signing up for the Winners Club newsletter: SI.com/newsletters

After a deep postseason run, the Boston Red Sox are looking to retool their pitcher rotation. While they already have great slingers like Chris Sale and Nathan Eovaldi, more pitching talent can’t hurt their chances. And based on who they’re aiming to get, they really are gunning for the best of the best in the league.
MLB・10 DAYS AGO
985thesportshub.com

Steven Matz will not be taking his talents to Boston, as the St. Louis Cardinals have outbid the field and signed the lefty to a four-year deal worth up to $48 million, according to ESPN’s Jeff Passan. The Matz decision, which was always expected to come before Thanksgiving, came on...
MLB・7 DAYS AGO
The Spun

Carlos Correa has made an official decision on his qualifying offer from the Houston Astros. Correa has declined the Astros’ $18.4 million qualifying offer, according to Jon Heyman. His days in Houston are over. The 27-year-old star is now the top free agent in baseball and is bound to receive...
MLB・16 DAYS AGO

One of MLB’s fastest players — if not the fastest — is coming to Boston. The Red Sox announced Friday afternoon that they had claimed speedster outfielder Tim Locastro off waivers from the New York Yankees. Locastro, a 29-year-old who has played with Los Angeles Dodgers, Arizona Diamondbacks, and Yankees,...
MLB・26 DAYS AGO
International Business Times

The New York Mets are skimming the free-agent pool, and one name that could make sense would be Steven Matz. Ironically, the 30-year-old pitcher is the same guy the Mets traded to the Toronto Blue Jays last winter. A reunion between the Mets and Matz would make sense considering the...
MLB・12 DAYS AGO
The Spun

The Boston Red Sox lost a key member of their rotation earlier this offseason, as Eduardo Rodriguez agreed to a five-year deal worth $77 million with the Detroit Tigers. On Friday, the front office found a free agent who can potentially take Rodriguez’s spot in the rotation. According to ESPN...
MLB・4 DAYS AGO
NJ.com

Houston, we have a problem. The New York Yankees watched the Astros swoop in Wednesday and sign free-agent right-hander Justin Verlander to a one-year, $25 million contract. That’s good money for a 38-year-old coming off Tommy John surgery. The Yankees were among a handful of teams linked to the two-time...
MLB・13 DAYS AGO

The Los Angeles Dodgers had Will Smith, Max Muncy, Justin Turner, Corey Seager, Trea Turner, Mookie Betts, Walker Buehler, Max Scherzer, Julio Urias and Kenley Jansen named among the nominees for the 2021 All-MLB Team. This is the third annual recognition for the top players, with winners being announced on...
MLB・20 DAYS AGO
NESN

The Boston Red Sox will be letting Garrett Richards and Martín Pérez return to the free agent market. Both players had their team options declined for the 2022 season, making them free agents. MassLive’s Chris Cotillo had the news on Richards, and The Boston Globe’s Alex Speier reported the Pérez decision.
NFL・24 DAYS AGO
WEEI Sports Radio

The Boston Red Sox made their decisions on which players they were going to add to the 40-man roster. The strategy left three spots open, while exposing some intriguing names to the Rule 5 Draft.
MLB・11 DAYS AGO
CBS Sports

Over the past few days, MLB teams have been scrambling to sign free agents ahead of the league’s Collective Bargaining Agreement expiring Tuesday night. Teams can’t sign free agents until a new deal is agreed to, and with lengthy labor negotiations expected, front offices are trying to get ahead of what’s to come.
NFL・1 DAY AGO
WEEI Sports Radio

The Chicago White Sox won the American League Central Division by 13 games in 2021. We went in thinking that they would have a tough battle with the Minnesota Twins. However, the Twins were not the team that came in second place. They didn’t come in third or fourth either. To everyone’s surprise, they were the last-place team.
MLB・2 DAYS AGO
670 The Score

For reliever Kendall Graveman, it was general manager Rick Hahn and the White Sox’s championship potential that made his decision to join the team in free agency the right one.
MLB・21 HOURS AGO
670 The Score

Utilityman Leury Garcia has agreed to a three-year deal to return to the White Sox, according to multiple reports Tuesday afternoon. He’s the longest-tenured White Sox player.
MLB・1 DAY AGO
Sportsnaut

The Red Sox and pitcher James Paxton have reportedly agreed to a one-year deal.
MLB・1 HOUR AGO
Sportsnaut

The Houston Astros signed right-handed reliever Hector Neris to a two-year contract on Tuesday. Financial terms were not disclosed by
MLB・1 DAY AGO