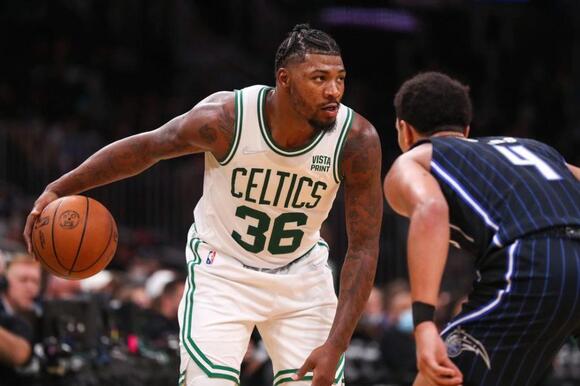 The Boston Celtics have reportedly suspended guard Marcus Smart for Friday’s preseason finale at Miami due to an unspecified breach of team rules.

According to Thursday’s report from The Athletic, Smart and team officials have resolved the matter and he is with the team for the Florida road trip.

Smart was one of several veterans who rested and did not appear in Wednesday night’s 103-102 loss at Orlando. 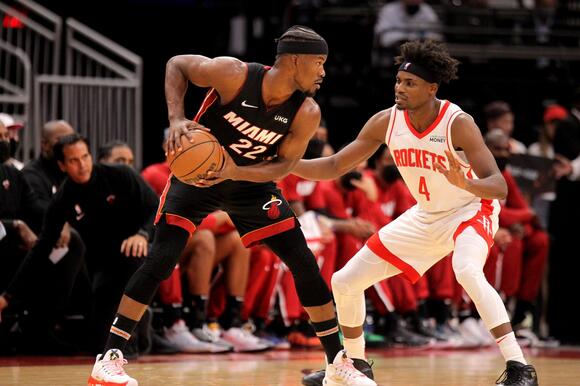 The Celtics open the regular season on Oct. 20 on the road against the New York Knicks.

The NBA season is in full effect and we have already seen some major moves made this offseason. These have been massive roster moves, with Russell Westbrook finding a new home in Los Angeles while the Washington Wizards and Chicago Bulls completely revamped their rosters. There could very well be even more player movement before this season’s trade deadline.
NBA・9 DAYS AGO
fadeawayworld.net

The NBA generally features a lot of player movement, and we've seen plenty of stars switch teams in recent memory. Sometimes, we even see multiple big-name players move in one transaction. Zach Buckley of Bleacher Report has recently proposed a blockbuster trade which would send Karl-Anthony Towns to Boston, Jaylen...
NBA・21 DAYS AGO
Sportsnaut

Bookmark. Save. Do your thing. We will be providing constant updates on this page as it relates to the biggest
NBA・4 DAYS AGO
Sportsnaut

Enes Kanter has been on one lately, coming for NBA greats like LeBron James and Michael Jordan—saying they're basically not woke enough. The Boston Celtics center is staying on brand by reportedly changing his name to Enes Kanter Freedom.
NBA・7 DAYS AGO
FanSided

Through just over a month, the 2021-22 season has been an absolute whirlwind for the Boston Celtics, as they can’t seem to find a way to stay consistent, be it with their rotations, win-loss record, or simply with their on-court production. Because of this, many have voiced their opinions on...
NBA・6 DAYS AGO
Sportsnaut

Though the Boston Celtics may find themselves heading in the right direction, what with the fact that they now boast a plus-.500 record despite having an unbelievably underwhelming and loss-filled start to the season, it’s still quite evident that they have plenty of work still left to be done in order to get to where they wish to be.
NBA・9 DAYS AGO

The Houston Rockets are mired in a 14-game losing streak. After a difficult loss to the New York Knicks on Saturday night, they head to Boston to take on the Celtics. Yeah, it appears the streak will continue. The Celtics are 9-8 and are currently tied for seventh in the...
NBA・14 DAYS AGO
westernmassnews.com

BOSTON, MA (WGGB/WSHM)-- The UMass Police Department's Honor Guard was asked to present the colors at Saturday night's Boston Celtics versus Oklahoma City Thunder game at TD Garden. According to Police, presenting the colors is when Honor Guard and Color Guard units in the police and military hold the flags...
NBA・14 DAYS AGO
NESN

BOSTON — The chirping between Kevin Durant and Ime Idoka started from the jump. Or technically, before it. Right before the start of the game, the Boston Celtics head coach and Brooklyn Nets superstar were so busy engaged in banter with each other that Durant literally missed the tip-off. It...
NBA・11 DAYS AGO
FanSided

Don’t look now, but the Boston Celtics are about to make a run. The run we all not only knew they could, but fully expected them to make after their shaky start to the 2021-22 NBA season. Since falling to 2-5 in their first season under their rookie head coach,...
NBA・14 DAYS AGO

It’s not easy to host the Brooklyn Nets, never mind shorthanded, and Boston’s win streak ended with a 123-104 loss on Wednesday night at home. The Celtics fall to 10-9 on the season while the Nets improve to 13-5. Here’s the full box score. ONE BIG TAKEAWAY. It was a...
NBA・11 DAYS AGO
ESPN

THE BALL SWUNG from Jayson Tatum to Dennis Schroder to Al Horford to Marcus Smart, pinging around the perimeter in search of the best possible shot. It was Nov. 19, and the Boston Celtics -- already leading by 14 points with just over five minutes to go against LeBron James and the visiting Los Angeles Lakers -- were about to put the finishing touches on an impressive win over their forever rivals.
NBA・12 DAYS AGO
NESN

The Boston Celtics take on the Brooklyn Nets on Wednesday night but may not have their full lineup. Boston released its injury report for Wednesday’s clash and listed both Jaylen Brown and Josh Richardson as questionable for the meeting with Brooklyn. Brown has been dealing with a hamstring injury that...
NBA・12 DAYS AGO
USA TODAY Sports Media Group

WATCH: How is Dennis Schroder fitting into the Boston Celtics lately?

While he certainly has some bad games filled with turnovers and occasionally dull ones as well, Boston Celtics veteran point guard Dennis Schroder has been a very solid pickup for the team even before you think about the value of his mini mid-level exception contract. But the game of basketball...
NBA・9 DAYS AGO

BOSTON — The Celtics finally had their top starting five back on the court, and it showed. Jaylen Brown returned after missing eight games with a hamstring injury, and even under a minutes restriction, shined alongside Jayson Tatum as Boston decimated the one-win Houston Rockets, 108-90. The Celtics improved to...
NBA・13 DAYS AGO
USA TODAY Sports Media Group

WATCH: Every play by Boston Celtics legend Larry Bird in the 1981 NBA Finals vs. the Houston Rockets

The Houston Rockets have long been a sneakily dangerous team even when they were losing, dating from when the Rockets faced the Boston Celtics in the 1981 NBA Finals with a losing record. Houston had gone 40-42 in the 1980-81 regular season compared to Boston’s 62-20 season under second-year Celtics sensation Larry Bird — you may have heard of him.
NBA・13 DAYS AGO
FanSided

Boston Celtics: Have the Celtics truly turned a corner?

Have the Boston Celtics truly turned the corner on the season?. Losers in five of their first seven games, many were quick to question the viability of this year’s Boston Celtics. Over that span, the Celtics were one of the worst teams in the league with a bottom-third offense and defense, including the sixth-worst net rating in the NBA.
NBA・13 DAYS AGO
FanSided

Tonight’s opponent for the Boston Celtics is one that is on pace for historic levels of losing in 2021-22. The Houston Rockets, currently sporting a record of 1-15, have lost 14 straight and have lost 10 of those contests by double digits. While there is certainly high-upside youth, particularly in...
NBA・13 DAYS AGO