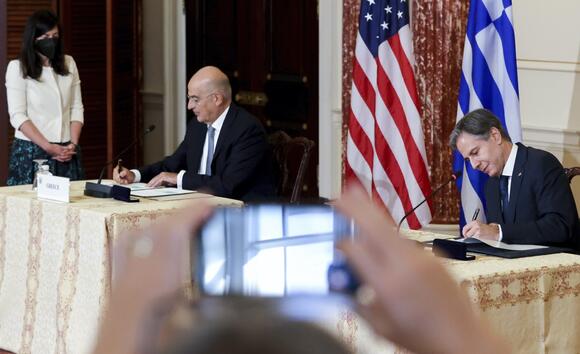 Greek Foreign Minister Nikos Dendias underscored the persistent “threat of war” with Turkey in a meeting with Secretary of State Antony Blinken at the signing of a deal to upgrade defense cooperation between Athens and Washington.

“Greece is facing a casus belli , a threat with war if it exercises its sovereign rights and, I have to say, Greece is facing daily provocation,” Dendias said Thursday at the State Department. “Greece is committed to resolve disputes with diplomacy and always in accordance with international law.”

Turkey and Greece have competing economic claims in the eastern Mediterranean, the danger of which was dramatized in a “mini-collision” between two frigates attempting to enforce the claims of the capitals. NATO officials established a “deconfliction” mechanism to avoid an outright conflict between the two countries, which went on to maintain “a quiet summer,” to the gratification of U.S. officials.

“The two governments at a political level had decided that they did not want a repeat of what we all lived through in summer of 2020 [when they were] running the risk of a military clash between NATO allies that would do none of us any good,” a senior State Department official told reporters this week. “So I think the situation is significantly improved from what it was in the summer of 2020. The underlying issues remain.”

Dendias hailed the revisions to the U.S.-Greece security deal as a bulwark against Turkey, which also is embroiled in significant security-related controversies with the United States. “Dear Tony, your commitment to Greece is greatly appreciated ... following the migrant crisis and the tensions in eastern Mediterranean last year, they acquired increased importance,” he said. “You are underlining that the United States as well as Greece are firmly determined to mutually safeguard and protect the sovereignty and territorial integrity of its country against actions threatening to peace, including armed attack or threat thereof.”

Erdogan’s purchase of Russian S-400 anti-aircraft missile systems, in conjunction with the tensions between Ankara and Athens, has stoked talk in Washington of a withdrawal of U.S. forces from Incirlik Air Base in Turkey, which houses dozens of U.S. nuclear weapons. Blinken made no reference to what would be a landmark shift within the U.S. alliance network but touted the improvement in Greco-American military ties.

“I’m particularly delighted that, today, the foreign minister and I will sign an amendment to the Mutual Defense Cooperation Agreement between our countries — two proud, strong NATO Allies, both deeply committed to our alliance,” Blinken said. “This update will allow the agreement to remain in force indefinitely, and it enables U.S. forces in Greece to train and operate from additional locations.”

“I don't think there’s another government in NATO that is more strongly aligned with the United States than Greece on the principle that we have to keep Turkey anchored in the West,” a senior State Department official said.

a lot of opium has been produced in Turkey including during the French Connection. France once ruled Turkey. Lucien Conein was an associate of the Corsican Mafia, a CIA agent, and the head of the DEAs secret ops. Conein lived in Maryland and Baltimore is a secret headquarters of the Corsican Mafia which have a close alliance with the Lucchese crime family which is owned by the Lucchesi noble family of Florence and Sicily. They are major opium and heroin traffickers and have been since the French Connection. The Roman-Florentine Corsini princely and papal family are top owners of the Corsican Mob and Corsica was named after them. The Bonapartes were Corsican and are also co-owners of the Corsican Mob. Charles Bonaparte of Baltimore was from the imperial family and he was US Attorney General and he founded the FBI. Nancy Pelosi is from Baltimore and she was knighted by the Italian govt.

Russian President Vladimir Putin wants a deal to block the expansion of NATO, a demand brought forth amid widespread suspicions that Moscow is preparing a military offensive against Ukraine.
POLITICS・1 DAY AGO
WashingtonExaminer

A seventh round of negotiations to rehabilitate the 2015 Iran nuclear deal floundered this week after the regime renounced the tentative agreements struck over the previous six rounds of meetings.
MIDDLE EAST・1 DAY AGO
WashingtonExaminer

Defense Secretary Lloyd Austin had a sharp warning for China on Thursday, saying Beijing’s hypersonic weapons program is ratcheting up tensions in Asia. “We have concerns about the military capabilities that the PRC continues to pursue, and the pursuit of those capabilities increases tensions in the region,” Austin said while visiting South Korea, using an abbreviation for the People’s Republic of China.
MILITARY・1 DAY AGO

Amid news that U.S. intelligence believes the Kremlin is plotting a possible invasion of Ukraine that could take place early next year, President Joe Biden and Russia’s President Vladimir Putin are scheduled to speak on Tuesday. According to The Associated Press, the Kremlin broke the news of the call to Russia’s state news agency RIA Novosti. The last time the two presidents spoke was this past July. The Washington Post first reported late Friday that Russia’s President Vladimir Putin has plans for a multi-front Ukraine offensive that could involve as many as 175,000 troops. An anonymous administration official told the paper, “The...
POLITICS・16 HOURS AGO
The Guardian

Joe Biden he said he would make it “very, very difficult” for Russia to launch any invasion of Ukraine, which warned that a large-scale attack could be planned for next month. Washington and Kyiv say Moscow has massed troops near Ukraine’s borders and accuse Russia of planning an invasion. The...
PRESIDENTIAL ELECTION・1 DAY AGO
Washington Post

Belarus hits back over new sanctions by U.S. and allies

Belarus on Friday condemned new economic sanctions from the United States and its allies, promising a “tough response” as the West increases pressure on President Alexander Lukashenko over his use of migrants in battles with the European Union and wider crackdowns on opposition to his regime. “Tough, asymmetric, but appropriate...
FOREIGN POLICY・1 DAY AGO
Washington Post

As tensions mount between Washington and Moscow over a potential Russian invasion of Ukraine, U.S. intelligence has found the Kremlin is planning a multi-front offensive as soon as early next year involving up to 175,000 troops, according to U.S. officials and an intelligence document obtained by The Washington Post. The...
MILITARY・1 DAY AGO

As warnings fly between U.S. and Russia, how real is the threat of war in Ukraine?

So far, tensions between Washington and Moscow over Ukraine have been restricted to a war of words, but could it flare into something more dangerous?
MILITARY・1 DAY AGO
POLITICO

There are signs that the White House and Kremlin are close to arranging a conversation next week between Biden and Putin.
MILITARY・20 HOURS AGO
Washington Post

MOSCOW — Despite significant tensions over a Russian troop buildup at the Ukrainian border, U.S. diplomats overcame a months-long standoff with the Kremlin on the granting of visas for U.S. Embassy personnel in Moscow during a meeting with Russian counterparts in Vienna, said U.S. officials familiar with the matter. The...
FOREIGN POLICY・1 DAY AGO
Newsweek

The Kremlin said the move is a response to a U.S. announcement that 27 Russian diplomats and their families would have to leave by January 30.
POLITICS・3 DAYS AGO

Well, this was a rather frightening thing to wake up to this morning. GPS World reports:. The Kremlin warned it could blow up 32 GPS satellites with its new anti-satellite technology, ASAT, which it tested Nov. 15 on a retired Soviet Tselina-D satellite, according to numerous news reports. On the...
POLITICS・3 DAYS AGO
NBC News

WASHINGTON — President Joe Biden on Friday pledged to make it “very, very difficult” for Russia's Vladimir Putin to take military action in Ukraine and said new initiatives coming from his administration are intended to deter Russian aggression. The president offered the measured warning to Putin in response to growing...
POLITICS・1 DAY AGO
The Independent

The talks between Anthony Blinken and Sergei Lavrov in Stockholm were supposed to help quieten the steady drumbeat of another possible war in Ukraine. Instead it ended after just 40 minutes amid accusations and recriminations, with no sign of a road-map out of the escalating and incendiary crisis.The Russian Foreign Minister warned of a conflict which will draw in other states and leave Europe facing the “nightmare of military confrontation”. Blinken responded that "the United States and our allies and partners are deeply concerned by evidence that Russia has made plans for significant aggressive moves against Ukraine,...
MILITARY・1 DAY AGO
BBC

Joe Biden has warned that he will not accept "red lines" set by Moscow as fears mount that Russia is planning an imminent invasion of Ukraine. The US president said he will make it "very, very difficult" for Russia to invade its neighbour. Meanwhile, US media has reported that intelligence...
POLITICS・1 DAY AGO
AFP

US vows to prevent any Russian invasion of Ukraine

US President Joe Biden said Friday he would make it "very, very difficult" for Russia to launch any invasion of Ukraine, which warned that a large-scale attack may be planned for next month. Biden told reporters in Washington he was putting together "the most comprehensive and meaningful set of initiatives to make it very, very difficult for Mr Putin to go ahead and do what people are worried he may do."
U.S. POLITICS・1 DAY AGO
americanmilitarynews.com

Russian President Vladimir Putin threatened a Russian retaliation if the U.S. or NATO allies cross a “red line” by reinforcing Ukraine by sending certain weapons, such as hypersonic weapons, cruise missiles and missile defense systems, to which he said Russia will match. “If some kind of strike systems appear on...
MILITARY・4 DAYS AGO
CBS News

Ukraine's defense minister says Russia could invade his country as soon as next month. While the Kremlin denies the allegations, the U.S. is warning Moscow there will be a steep price to pay if things escalate. CBS News correspondent Christina Ruffini discusses the situation with CBSN's Elaine Quijano.
POLITICS・1 DAY AGO
Newsweek

The deployment comes as speculation continues about a Russian invasion of Ukraine.
MILITARY・2 DAYS AGO