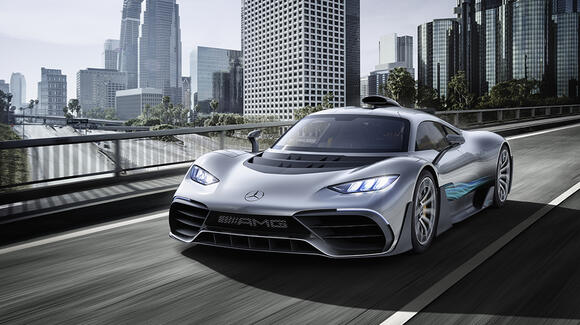 The finish line is finally in sight for the Mercedes-AMG One .

The German marque’s performance division has emailed customers who ordered the hybrid hypercar to let them know the much-anticipated vehicle will finally go into production in mid-2022, AMG confirmed to Robb Report on Thursday. The news, which was first reported by Autocar , marks an end to one of the more torturous automotive development phases in recent memory.

That’s because the One was first shown off by Lewis Hamilton in concept form way back in 2017 as part of the division’s 50th anniversary celebrations. While a hypercar from a brand like AMG was always going to garner attention, this was especially true of one equipped with a Formula 1-sourced hybrid powertrain. Consisting of a 1.6-liter turbocharged V-6 engine and an electric motor, the powertrain will supposedly generate more than 1,000 horsepower, allowing the car to slingshot from 0 to 124 mph in under six seconds and hit a top speed of 217 mph. We still don’t know if the car will be able to deliver on those promises, but it certainly sounds like it will .

Unfortunately, turning a Formula 1 racer into a road car appears to have been more difficult than initially anticipated. Production of the plug-in hybrid was originally supposed to begin in 2019, but has repeatedly been pushed back because of engineering issues. Chief among these has been getting the powertrain to comply with increasingly strict European emission standards and problems with the engine’s idle speed. The AMG team never stopped working on the car— it has been spotted undergoing testing multiple times—and now it appears the car is finally ready for its big moment.

Just because the One will finally go into production in 2022 doesn’t mean you’ll have any better chance of getting your hands on one. All 275 examples of the hybrid speed machine have already been spoken for, despite the car’s jaw-dropping $2.6 million price tag. There appear to be no plans to increase the production run despite all the delays.

Regardless, with both the One and AMG GT 63 S E Performance set to go into production next year, Mercedes-AMG’s electrification push is really starting to build up speed.

The G-Wagen isn’t the only option for Mercedes-Benz lovers looking to off-road in style. Classic Youngtimers Consultancy has just unveiled an insane six-wheel version of the German marque’s X 350d “Black Edition” truck. With a host of modifications it’s likely one of the gnarliest Mercedes you’ll lay eyes on. You’d be forgiven for not knowing that the German automaker has a pickup truck in its lineup. The X-Class was introduced in 2017 and only released in Australia, New Zealand and parts of Europe, Africa and Latin America. It never quite managed to catch on, and the brand pulled the plug on it...
CARS・5 DAYS AGO
Robb Report

It appears that the production version of the Polestar Precept is going to look just like the concept it’s based on—and that is a very good thing. The Volvo sister brand shared the first official image of the upcoming battery-powered vehicle Tuesday morning. Along with the photo, the marque also revealed that the zero-emission grand tourer will be called the Polestar 5 and confirmed that it is scheduled for a 2024 launch. Easily the most exciting thing about the first Polestar 5 photo is that it shows a vehicle that looks remarkably similar to the sleek Precept concept that debuted in February...
CARS・7 DAYS AGO
Robb Report

As exciting as the new all-electric Mercedes-Benz EQS may be, it could soon be eclipsed by another EV from the marque. The German brand’s Chief Operating Officer Markus Schäfer announced that the company’s latest battery-powered vehicle, the Vision EQXX, will make its official debut at CES in January. While a new Mercedes EV is always intriguing, this one is promising one particularly impressive feature—a range of 621 miles. If that sounds like an awkward number, it’s because Mercedes’s range target for its latest EV is actually 1,000 kilometers per charge, or 621.4 miles, according to a LinkedIn post from Schäfer. The automaker...
CARS・23 HOURS AGO
Robb Report

You won’t have to wait two years to get your hands on a fully electric station wagon after all. The 718 Cayman GT4 RS and Clubsport aren’t the only new cars the Porsche is debuting at this week’s Los Angeles Auto Show. The German marque also showed up with its latest Taycan variant, the GTS, which comes in two versions: a sleek sedan and a high-performance wagon called the Sports Turismo. The GTS Sports Turismo isn’t technically the first Taycan wagon. That honor belongs to the Cross Turismo, which was introduced by the brand last year. But, as Road & Track points...
CARS・12 DAYS AGO

There are a lot of estate enthusiasts out there. Whether it has a turbodiesel or a V8 engine, for as long as it has a long roof, there will be those who will want it. This body style may not be popular, but its rabid fans keep it hanging for a longer time.
CARS・1 DAY AGO
CarBuzz.com

Pimp Your Baby's Ride With The All-New Mercedes-AMG Stroller

Are you an influencer with a brand-new baby on the way?. Well, have we got some good news for you. Mercedes-Benz recently teamed up with Hartan to design a brand-new Mercedes-AMG baby stroller. Hartan and Mercedes have been collaborating for three years, and their most recent effort was a stroller designed to fit in the back of a Mercedes-AMG GT. Skoda also did something similar in 2013, but there hasn't been a Skoda stroller since. Mercedes-AMG essentially owns this particular segment.
HOME & GARDEN・2 DAYS AGO
CAR Magazine

When you conjure up images of AMG, you're usually drawn to the absolutely ballistic four-cylinder unit in its smallest models, or the thumping twin-turbo V8 the performance brand has come to be known for. So, to say you can get a mild hybrid straight-six with a proper AMG badge on it still jars just a little – even if this option has been on Mercedes price lists for the past few years already.
HOME & GARDEN・14 DAYS AGO
Pistonheads

The Mercedes-AMG GLB 35 is one of the weirdest, yet most surprising, cars I've driven in a while. Maybe ever, come to think of it. When it turned up, I just stood staring at it for a good while, thinking "what the hell is this?" Untypically for a modern SUV, its body is tall and boxy, but in AMG-spec it looks like someone's modded it: like it's been slammed.
CARS・9 DAYS AGO

Sterckenn recently presented a new Carbon-Fibre Splitter for the Mercedes A45 AMG. The EU-based company is known for manufacturing performance body parts for BMW M models for clients from USA, Europe, Japan, Australia as well as other parts of the world. Sterckenn operations are limited to a narrow specialization of...
CARS・10 DAYS AGO
CarBuzz.com

We've known for a while now that BMW is working on a new redesigned X1, but now, for the first time, our spies have caught BMW testing a new high-performance M variant. The most obvious difference between this and previous X1 prototypes is the quad exhaust system normally found on M cars that gives it a sportier look than the regular BMW X1 we've spied before. Our source believes this is an enhanced M Sport model rather than a full-fat M model, however, so don't expect the performance to be on par with models like the X3 M and X4 M. BMW's hot new crossover will likely be called the X1 M35i since BMW already offers an M35i version of the 2 Series Gran Coupe.
CARS・11 DAYS AGO
Carscoops

Performance cars have come a long way in the last decade but have they improved to the point where a new BMW M3 Competition can rival a Mercedes-Benz SLS AMG Black Series? Let’s find out. The SLS AMG Black Series is an utter animal and is powered by a 6.2-liter...
CARS・12 DAYS AGO
Gear Patrol

The Mercedes-AMG GT 43 Is a Lukewarm AMG, and That's Totally Fine

Clearly, the Mercedes-AMG GT 43 should affront my car enthusiast sensibilities. The AMG GT is the Mercedes lineup's high-performance two-seat sports car...and the AMG GT 43 makes every compromise to that purist vision. First of all, it's the more practical four-door version (though not practicality-minded enough to do without one of those weird swoopy roofs so in vogue these days); even if you're okay with that, however, the GT 43 is the embodiment of AMG badge creep, sharing its detuned 362-horsepower 3.0-liter inline-six with non-AMG cars.
CARS・7 DAYS AGO

Merc discontinued the V8 five-door years ago, but one tuner has resurrected it. Skip 5 photos in the image carousel and continue reading. Turn on Javascript to see all the available pictures. They literally do not make them like this anymore, because Mercedes discontinued the old V8-engined, AMG CLS Shooting...
CARS・7 DAYS AGO
Autoweek.com

One of the most controversial styling trends centers around one of the most popular trends of our time: the crossover coupe. The Mercedes-AMG GLE 63 S takes the crossover coupe style and blends it with the outlandish 4.0-liter turbocharged V8 to make one of the more interesting combinations of performance, utility, and style on the road. Based on the standard GLE-class Mercedes-Benz, the Mercedes-AMG GLE 63 S is a 603-hp people mover with all of the attitude you’d expect from an AMG. Of course, this top-flight crossover isn’t a bare-bones performance machine; it’s also well appointed with leather and soft-touch materials throughout the interior and sports lots of high-tech consumer features.
CARS・6 DAYS AGO
Carscoops

A particularly striking 2017 Mercedes-Benz S65 AMG has hit the used car market in Germany and could be perfect for anyone wanting to start a high-end taxi company or simply wanting an S-Class that stands out from all others. Adorning the exterior of this S65 AMG is the same shade...
BUYING CARS・6 DAYS AGO
topgear.com

‘How does it feel’, you think to yourself, ‘to drive a car which develops a claimed 385 horsepower?’ Perhaps only astronauts and stockbrokers will ever know potency like it. Shrugging off the fantasy, you clamber into your Mk2 Golf GTI, and as its eight-valve 1.8-litre engine thrums into life, chuckle...
CARS・15 HOURS AGO
Robb Report

The BMW M is turning 50, and the marque is celebrating the best way it knows how—by debuting a new concept. The German automaker’s performance division unveiled the new Concept XM at Art Basel Miami on Monday night. The second standalone M model is a plug-in hybrid SUV highlighted by a daring geometric design and a robust 750 horses under the hood. To be sure, the first thing you’ll notice about the XM is its design. At a glance, it looks like any of the brand’s other SUVs, like the X7, but closer inspection reveals a body that’s far more angular than...
CARS・26 MINUTES AGO
Robb Report

The mid-’90s Toyota Supra is so coveted among enthusiasts that there are some willing to pay supercar prices for it. That’s why an exotic car dealership in Illinois, Diamond Motorworks, recently listed a gorgeous example from the beloved car’s fourth generation for $299,800. Why so much for this specific Supra? Because it’s fully stock and remains in nearly pristine condition 28 years after rolling off the line. Although it was a favorite of the budget conscious sports car lovers dating back to the early ‘80s, the Supra didn’t really begin the ascent to legend status until 1993. That’s the year that the...
BUYING CARS・12 DAYS AGO