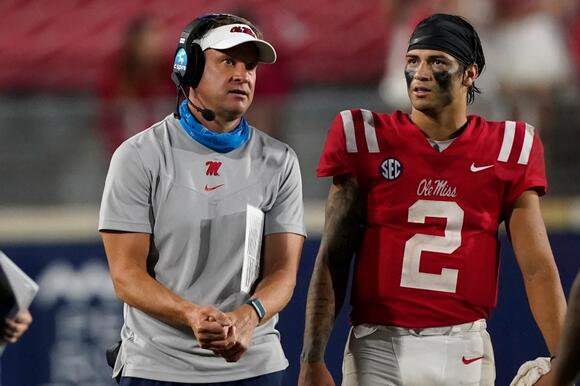 KNOXVILLE, Tenn. (WATE) — Heisman-hopeful quarterback Matt Corral is an elite talent for the Rebels offense, and Tennessee knows it. Corral has thrown a touchdown in 17-straight games and has completed 69% of his passes this season, without a single interception. He’s also racked up 255 rushing yards and eight touchdowns.

“He’s a great playmaker, he does a good job at taking care of the football. We got to apply pressure to him, and also bottle him up inside the pocket, if you let him get loose he’ll hurt you with his feet but he hurts you with his arm first,” Vols coach Josh Heupel said on the SEC West quarterback.

“We have to do a great job of matching people in zone coverage, once he does break contain. We have to make it an uncomfortable night for him inside the pocket. You still have to rush him, if you don’t he’s going to sit back there all night long. You have to maintain some rush integrity and when we’ve done that we’ve made it extremely difficult to get out of the pocket. When we haven’t done that, then we’ve given quarterbacks the opportunity to get out and extend and make plays. Can’t do that on Saturday night.”

Heupel added that the Rebels do a great job of understanding their offensive scheme, and they’re well-coached, but it’s their quarterback that’s the difference-maker. “The quarterback makes the numbers right for them a lot of the time playing 11 on 11 and the offensive line does a nice job.”

Saturday’s game will be Tennessee’s first sellout crowd for the first time since 2017 and the fans are checkering the stadium .

“I can’t wait to see the Vol Walk and to see the stadium checkerboarded out. After the ball game last week when we started talking about this one, we talked about it needs to be a home field advantage and obviously, Saturday night should be that way,” said Heupel. “I can’t wait to experience it with our crowd, looking forward to it.”

Photos: How the Vols fare vs. what Heupel would wear

The Tennessee Volunteers finished the regular season with seven wins and five losses in year one of the Josh Heupel era. So, how did the Vols fare in compare to what Heupel would wear?
KNOXVILLE, TN・22 HOURS AGO
WATE

The third time was the charm for Powell as the Panthers held on to win their 5A state championship with a 42-34 victory over Page in the Blue Cross Bowl.
POWELL, TN・12 HOURS AGO
WATE

Inky Johnson returns to Tennessee to give commencement address

At 9 a.m. on Friday, Inky Johnson, who lost his right arm in a 2006 game at Neyland Stadium, will bring his passion and motivation to the grads of his alma mater. He has a master's degree in sports psychology from UT and travels the world as a speaker along with mentoring athletes and underprivileged youth.
TENNESSEE STATE・1 DAY AGO
WATE

A wrong-number text turns into an epic video chat with the Super Bowl champs.
NFL・17 HOURS AGO