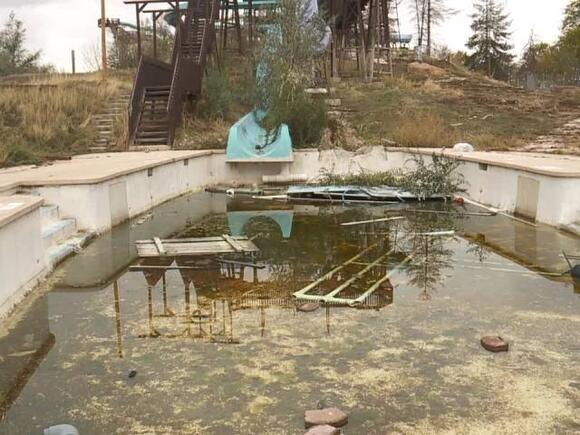 The iconic Raging Waters waterpark in Salt Lake City’s Glendale neighborhood is being destroyed after years of sitting abandoned.

FOX 13 NEWS 360: What to do with dilapidated 'Raging Waters' site

“My kids loved it. I loved it,” said Vika Satini.

On Thursday, city crews tore apart some slides. Filling-in the pools and removing the paving will be next.

“To see it like this is just so sad,” said Satini.

In the early 1980s, the iconic water playground boasted one of only one of three wave pools in the world.

“We want this land to become a valued community asset once again,” said Salt Lake City Mayor Erin Mendenhall. “The water park is an important part of our City’s history and its future. We are looking forward to learning from the Glendale community and other Salt Lake residents about what this site means to them and how it could be transformed.”

“This was an institution both for the neighborhood and the whole Wasatch Front,” said Glendale Community Council Chair Turner Britton.

Now, the pools leak and the equipment is unsafe. It’s a magnet for mischief and crime.

The site was purchased with state money, so it must be used for outdoor recreation. For now, demolition is the only solid plan.

The City of Salt Lake says they’re doing everything they can to recycle the old park. They want to take the concrete and use it as a road base for further projects. Healthy trees will be preserved and some of the slides will be set aside.

Satini hopes something just as exciting will return for the Glendale neighborhood.

“Even if they brought back like a public pool, something with smaller slides, a splash pad would be so great,” said Satini.

The city is currently taking public input on what to do with the land. A master plan is expected next spring.

Parleys Canyon may soon be home to an open-pit limestone quarry, according to a proposal filed with Utah mining regulators this month. A recently formed LLC called Tree Farm proposes using explosives and drills to mine beneath the northeastern flank of Grandeur Peak, a popular hiking destination from Mill Creek Canyon, with the intent of extracting 2 million tons of crushed rock a year.
SALT LAKE CITY, UT・3 DAYS AGO
FOX 13 News

Cafe in Riverton installs self-order kiosks due to labor shortage

A Utah woman died after she crashed while riding an ATV near Bear Lake Friday night.
FISH HAVEN, ID・17 HOURS AGO
FOX 13 News

Retailers aren't the only ones who are busy on Black Friday. Plumbers across the state anticipate a spike in calls for service in the wake of Thanksgiving festivities.
SALT LAKE CITY, UT・3 DAYS AGO
FOX 13 News

Holiday travel at Salt Lake City International Airport is approaching levels seen prior to the pandemic. Wednesday, the day before Thanksgiving, the airport estimates 26,000 people passed through the facility’s doors, a sharp increase over the same day in 2020.
SALT LAKE CITY, UT・4 DAYS AGO
FOX 13 News

A huge annual UTV event in Moab attended by thousands from across the country and internationally has been canceled for 2022.
MOAB, UT・3 DAYS AGO

A wildlife group is asking UDOT to make changes to a highway between I-80 and Park City, saying there's been an alarming number of drivers hitting animals like deer and moose.
PARK CITY, UT・4 DAYS AGO
FOX 13 News

A Utah-based company is reinventing how skis are made, substituting petroleum products in ski production with an algae-based bioplastic.
UTAH STATE・5 DAYS AGO

After the Thanksgiving food coma has worn off is when the holiday shopping madness typically begins.
SALT LAKE CITY, UT・4 DAYS AGO
FOX 13 News

The sight of a bear climbing a tree in Richfield last week drew lots attention. Unfortunately for the bear, this was not the first time she had ventured near humans.
RICHFIELD, UT・4 DAYS AGO
FOX 13 News

Demolition has begun on the North Visitors' Center at Salt Lake City's Temple Square, according to a report from the Salt Lake Tribune.
SALT LAKE CITY, UT・6 DAYS AGO
FOX 13 News

As the snow continues to fall in the mountains the chance for an avalanche increases in the backcountry, that’s why the Utah Avalanche Center is training outdoor enthusiasts on how to stay safe.
UTAH STATE・4 DAYS AGO

Almost a million dollars in federal funding is coming to Utah to look at ways to connect the University of Utah’s Research Park Campus and the emerging Innovation District in downtown Salt Lake City.
SALT LAKE CITY, UT・6 DAYS AGO
FOX 13 News

Governor Spencer Cox called on Utahns to quit cable news and Facebook to heal political and social divides that have been exacerbated by the COVID-19 pandemic.
UTAH STATE・4 DAYS AGO
FOX 13 News

The Federal Bureau of Investigation in Salt Lake City is warning specifically Utahns to be on high alert this holiday season for shopping scams.
SALT LAKE CITY, UT・4 DAYS AGO
FOX 13 News

Community comes together to help 'Mama Africa' stay in business

A local woman has made her famous spicy sauce for folks in the Beehive State and across the nation for 12 years.
SALT LAKE CITY, UT・5 DAYS AGO