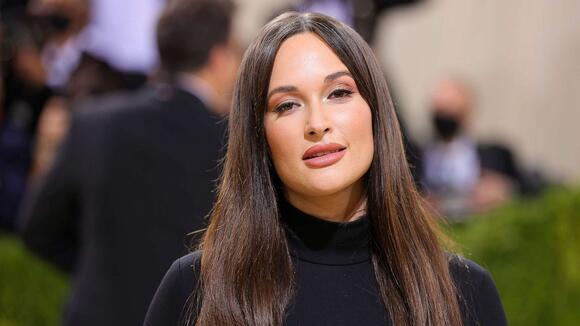 Kacey Musgraves will always be a country girl.

Yet, the Recording Academy recently deemed the "Justified" singer's latest album, "Star-Crossed," ineligible for consideration in country categories at the next Grammy Awards ceremony. Instead, the record will compete in the pop categories.

Musgraves, 33, took to Twitter on Wednesday seemingly to react to the news, sharing a photo of herself as a child wearing a pink cowboy hat. "You can take the girl out of the country (genre) but you can't take the country out of the girl," she wrote.

Over on Instagram Stories, the "Simple Times" singer took a more direct approach, sharing photos and videos of her with country music legends such as Loretta Lynn, Willie Nelson, Shania Twain, Dolly Parton and more. She ended the slideshow with a photo of herself giving the middle finger.

Musgraves -- who is from Golden, Texas, and now resides in Nashville -- released "Star-Crossed" last month. It’s the follow-up to her third album, 2018's "Golden Hour," which won her four Grammys at the 2019 ceremony, including best country album and the coveted album of the year.

She had previously won best country album -- a title she won’t be eligible for in 2022 -- for her debut 2013 album, "Same Trailer Different Park." Her second album, 2015's "Pageant Material," was nominated in the category.

It’s not your typical karaoke night when Ariana Grande and Kelly Clarkson are at the mic!. The two singers channeled their fellow pop divas in a clip from Jimmy Fallon’s upcoming NBC musical variety show, “That’s My Jam.”. Facing off in a round of “Mixtape Medley,” Grande and Clarkson took...
CELEBRITIES・2 DAYS AGO
Rolling Stone

Ariana Grande and Kelly Clarkson, two coaches on The Voice this season, enter a battle round of their own as guests on the special preview of Jimmy Fallon’s That’s My Jam, an hour-long music and comedy variety game show premiering on January 3rd on NBC. The pair is selected to go head-to-head in a mixtape medley showdown. Fallon spins the wheel of genres and categories from which the singers are tasked with performing, which fittingly lands on pop divas. Grande kicks off with a choreographed-from-memory run of Britney Spears’ “Oops!… I Did It Again” while Clarkson follows after with “Any Man of...
CELEBRITIES・2 DAYS AGO
audacy.com

Kacey joined Mercedes for a Zoom interview to talk about her new album Star-Crossed, the film, her new tour, and so much more. Kacey talks about plant therapy and how psychedelics inspired her to make this album, her song Gracias A La Vida and how she heard the song when she was on a guided trip, the original artist was Chilean and another artist also covered the song whose name was Mercedes!
MUSIC・13 DAYS AGO
Rolling Stone

The country music community has always had an intrinsic connection to America’s agricultural roots. With that in mind, it’s no surprise that the genre’s artists have acted as music’s first responders in the face of a mounting problem: the steady erosion of local farming communities across the nation. It’s in this spirit that Chipotle tapped Kacey Musgraves to lend her voice to its latest animated short that sheds a light on the plight of family farmers nationwide. “A Future Begins” tells the story of a young farmer who grows up and makes tracks for the big city, only to realize that...
TV & VIDEOS・13 DAYS AGO

Kacey Musgraves’ potential 2022 Grammy nominations made headlines last month when it emerged that the Recording Academy had decided that her latest release, star-crossed, wasn’t eligible in the country albums category. In the wake of that decision, which prompted a strongly worded letter from the president of Universal Music Group Nashville, Musgraves only scored two nominations, neither of which was for star-crossed as an album. Musgraves has won six Grammys over the course of her career, including album of the year in 2018. Other artists who fared worse than expected as the 2022 Grammy Awards nominations were announced today include Drake,...
MUSIC・9 DAYS AGO
CMT

Nominations for the 2022 Grammy Awards were revealed on Tuesday and Jimmie Allen, Chris Stapleton and Mickey Guyton are among country music’s top nominees. Allen, who is up for Best New Artist, is country music’s lone all-genre nominee. Guyton picked up three nominations – including her history-making Best Country Album...
CELEBRITIES・9 DAYS AGO
Showbiz411

UPDATE There no country albums in the general Album of the Year category! Kacey Musgraves, who won Album of the Year a couple of years ago in 2019 for “Golden Hour,” didn’t make it for “StarCrossed.” Neither did Chris Stapleton or Sturgill Simpson! Kacey complained to the Recording Academy that “Star Crossed” wasn’t let into the country category. And now it’s been eliminated from the mainstream, too.
MUSIC・9 DAYS AGO
wkml.com

Here are the nominees for the 2022 Grammy Awards in Country Music. The Grammys will be aired live on CBS on January 31, 2022. “You Should Probably Leave” – Chris Stapleton. Best Country Duo/Group Performance. “If I Didn’t Love You” – Jason Aldean and Carrie Underwood. “Younger Me’ – Brothers...
MUSIC・9 DAYS AGO

Kacey Musgraves can be 'cold and standoffish'

Kacey Musgraves admitted she can come across as “standoffish” and “cold”. The ‘breadwinner’ hitmaker is very "detail-oriented" when it comes to her work and she will always speak out if she thinks something isn't going the way that it should but she admitted she doesn't always come across in the right way.
CELEBRITIES・9 DAYS AGO
AOL Corp

The nominees for the 2022 GRAMMYs are here — along with a few major snubs (no BTS in the Big 4?) and surprises (Jon Batiste, for the win!). On Tuesday, the Recording Academy announced the nominees for the 64th Annual GRAMMY Awards. Batiste leads the pack with 11 nominations, followed by Justin Bieber, Doja Cat and H.E.R. with eight apiece and Olivia Rodrigo and Billie Eilish with seven.
CELEBRITIES・9 DAYS AGO
iheart.com

Kacey Musgraves Calls Divorce 'The Ultimate Decision To Move On'

Kacey Musgraves has found a new outlook on divorce. Speaking with V Magazine for the issue’s December cover story, the newly-nominated Grammy act said that her 2020 divorce from Ruston Kelly after two years of marriage has brought some unexpected surprises. "When you lose something in your life — it...
TROUBLE RELATIONSHIP・8 DAYS AGO
KBOE Radio

KACEY MUSGRAVES DISCUSSES THE END OF HER MARRIAGE

Kacey Musgraves discusses her divorce from Ruston Kelly in the new issue of “V” magazine, and admits in the end it was for the best. “When you lose something in your life — it might be a friendship or relationship, or even a business relationship or something like that — we’re all conditioned to think, ‘Oh my gosh, this one thing is ending. This is the worst; it shouldn’t be this way,’ ” she said. “But it’s really cool that life can have this beautiful surprise around the corner from you.”
CELEBRITIES・8 DAYS AGO

Kacey Musgraves Looks So Different Without Her Signature Dark Hair

Kacey Musgraves is the latest celebrity to lean into the pastel pink hair trend. The bright shade spiked in popularity last year during the COVID-19 lockdown, and the country singer is proof the trend is still going strong in post-vaxx life. On Nov. 23, Musgraves, otherwise known as Spacey Kacey,...
BEAUTY & FASHION・9 DAYS AGO
Glamour

Kacey Musgraves has gone full bubblegum princess, and it's some strawberry shortcake perfection. On Wednesday, November 24, the Grammy-nominated country artist debuted petal pink hair on Instagram, and it's so gorgeous. Though she's always played with color in her outfits and makeup, Musgraves has made her long, shiny dark mane...
BEAUTY & FASHION・8 DAYS AGO
Allure

Kacey Musgraves has never been one to shy away from experimenting with her beauty looks. Glitter eye shadow to match a gloriously massive purple feather hat? Check. Disco brows? Check. Now, the singer has pink hair and it might be her most surprising transformation yet. On November 23, Musgraves posted...
NEW YORK CITY, NY・8 DAYS AGO
thatgrapejuice.net

That Grape Juice know how passionate we are about music – whether that be past or present. However, unlike our other segments – Retro Rewind, TGJ Replay, and From The Vault – The Pop Stop is the most in-depth look at Pop songs that may have flown under the radar over the last week that you should know, rather they be from music’s biggest stars or those on the rise.
MUSIC・5 DAYS AGO

Kacey Musgraves is getting immortalized in puzzle format, just in time for holiday gift-giving season. The singer has teamed up with the puzzle brand JIGGY on two JIGGY x Kacey Musgraves Puzzles, available now at JiggyPuzzles.com. This is an officially-licensed collaboration between Musgraves and the puzzle brand. One set features the cover art for her latest album, Star-Crossed, while the other set features a photo of Musgraves taken from the album shoot. Jiggy Buy:JIGGY x Kacey Musgraves Album Puzzleat$40 Each set features 500 puzzle pieces, with the finished puzzle measuring 16.5 x 22.5 inches. In addition to a collectible box, all the pieces come...
CELEBRITIES・3 DAYS AGO
Billboard

This Stunning Kacey Musgraves Puzzle Is the Ultimate Holiday Gift

If you purchase an independently reviewed product or service through a link on our website, we may receive an affiliate commission. Time for a Star-Crossed holiday, thanks to puzzle company Jiggy. To celebrate Kacey Musgraves’ recent album, the brand unveiled two gorgeous 500-piece jigsaw puzzles, featuring the Star-Crossed album art...
LIFESTYLE・3 DAYS AGO
Pitchfork

Kacey Musgraves was featured on today’s new episode of Sesame Street. Joined by the muppets Elmo, Gabrielle, Count von Count, Big Bird, and Abby Cadabby, Musgraves sang about her favorite colors, which turns out to be all the colors. Watch the video below. Musgraves has previously performed on The Not-Too-Late...
CELEBRITIES・19 HOURS AGO
Rolling Stone

Tori Kelly finds comfort in her “North Star” in the first single from Zoey’s Extraordinary Christmas Playlist, the holiday movie spin-off of Zoey’s Extraordinary Playlist. The track (which is available for preorder) and the Roku Channel film arrive on Wednesday. Produced by Harvey Mason Jr., and written by cast member Mary Steenburgen, Caitlyn Smith and Troy Verges, the song finds Kelly singing of a holiday gathering in the wake of loss. “I’m always looking up, ’cause I can feel your love and I know just where you are in the sky and in my blood,” she sings. “And I’ve never been...
MOVIES・2 DAYS AGO