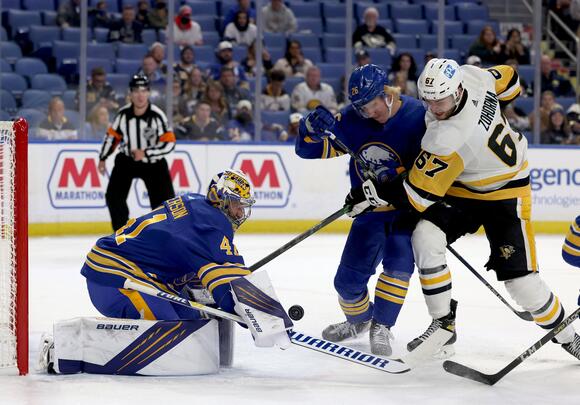 The 40-year-old veteran will he get the call in net on Thursday, as the Sabres open the 2021-22 season against the Montreal Canadiens. In case you were wondering, Anderson has beaten the Canadiens 13 times in his career.

Anderson has 652 games played in the NHL, but he said he’ll still have those nerves before the game starts.

"There's still those first game jitters. They're always going to be there," Anderson said. "But it's more so the excitement of playing in the first game and playing a game that's meaningful."

Thursday will be the first opening night for Don Granato as a head coach in the NHL. Like Anderson, Granato says of course he’ll be anxious.

“You’ll always get a little nervous, so I think that’s part of being excited about the job you have," he said on Thursday. "If you’re not getting a little nervous, there’s probably something wrong. It might be time to hang it up.”

Montreal already played its first game of the season on Wednesday, a 2-1 loss to the Maple Leafs in Toronto. Anderson doesn’t think his team will be outworked, and he’s liked what he’s seen from the group in training camp.

“This a hardworking, close-knit group," Anderson said. "We’ve got a good base to start from, and we’re not counting on one or to guys to step up and say, 'Hey, we’re going to put the team on our back.' It’s going to take all 20 guys here pulling on the rope.”

When watching the way Anderson works on and off the ice, Granato doesn’t look at the veteran as a 40-year-old.

“I’m very impressed with Craig," Granato said. "At his age, I mean I wouldn’t know his age. "He’s competing like a young guy, and to stay in this league you have to have that rookie mentality every year.”

Vinnie Hinostroza was tied with Dylan Cozens for the preseason scoring lead. The winger had two goals and two assists in exhibition play, and will start the season on a line with Casey Mittelstadt and Jeff Skinner. Skinner likes what Hinostroza brings to the ice.

“He’s got a lot of speed, he’s good on the forecheck and he’s pretty skilled too," Skinner said of his linemate on Thursday. "He doesn’t get as much credit for that as he is, because he makes good plays in tight areas.”

The Sabres will scratch Will Butcher, John Hayden and Arttu Ruotsalainen for the first game.

This past season, Montreal went to the Stanley Cup Final with Carey Price and Shea Weber. Price is away from the team for personal reasons, and Weber is out for the season with an injury and may never play again.

Jake Allen was in net against the Leafs, making 28 saves. That means Samuel Montembeault will get the start for the Canadiens on Thursday.

Rick Jeanneret will start his final season broadcasting Sabres hockey with the first two games of the year.

Join Schopp and the Bulldog for pregame coverage starting at 6 p.m. ET when they’ll be joined by Granato, Anderson and Rasmus Dahlin.

Observations: Sabres Can Hang With Anyone, But Is It Enough?

They could keep pace, they could drive play, they could score along with the best in the league so far. There isn’t a lot of space for moral victories, but looking like on any night you can play and perform like a major league club is big
NHL・14 DAYS AGO
WGR550

Morgan Rielly’s first goal of the season came with 11.8 seconds remaining in the third period to help the Toronto Maple Leafs stun the Buffalo Sabres, 5-4, on Saturday night at KeyBank Center. Pat Malacaro has a complete game recap:
NHL・13 DAYS AGO
WGR550

The Buffalo Sabres are in Pittsburgh taking on the Penguins inside PPG Paints Arena. It’s the first game for the blue and gold since a heartbreaking, last-second loss at home to the Toronto Maple Leafs Saturday evening.
NHL・11 DAYS AGO
WGR550

Bryson got a great opportunity to play after Samuelsson was injured during the Prospects Challenge. The second year defenseman took advantage and is playing well for the Sabres. In his last two games Bryson has earned 23:19 and 24:23 of ice-time.
NHL・11 DAYS AGO

With Toronto up 3-1, Pysyk worked hard to cause a turnover to Skinner who was in support right behind him, Skinner curled and found a wide open Thompson for a one-timer that was a bomb. Both Thompson and Skinner are on 29-goal paces.
NHL・13 DAYS AGO
WGR550

Sabres general manager Kevyn Adams joined the Sabres Pregame Show on Saturday night prior to the team’s game against the Maple Leafs to discuss the team’s performance to begin the season, as well as how several prospects are developing.
NHL・14 DAYS AGO
WGR550

Sabres have little time to shake devastating loss to Rangers

With back-to-back games, the Buffalo Sabres elected not to hold a morning skate on Monday. Buffalo will tangle with the Columbus Blue Jackets, as they try to figure out how to play a full 60 minutes. Paul Hamilton has a game preview:
NHL・5 DAYS AGO
WGR550

The Sabres traveled to Pittsburgh on Tuesday and, though, outplayed in most offensive aspects, Buffalo escaped the Penguins’ hard-charging third period thanks to a performance for the ages from Dustin Tokarski. Kyle Powell has a complete game recap:
NHL・10 DAYS AGO

After coming off a stinging, last-second loss to the Rangers on Sunday, the Sabres looked to bounce back against the visiting Blue Jackets on Monday night at KeyBank Center. They didn’t necessarily bounce back, but sort of bounced and stumbled.
NHL・4 DAYS AGO
WGR550

LISTEN: Granato: Sabres' injuries are tough to give timetables on

Sabres head coach Don Granato joined the “Howard and Jeremy Show” on Tuesday as his team looks to bounce back from a Saturday loss to the Maple Leafs when his team takes on the Penguins on Tuesday in Pittsburgh. Here’s some of what he had to say:
NHL・11 DAYS AGO
WGR550

The players stood up to it after the game. Hinostroza didn’t mince words, “That was an embarrassing effort at home and it’s not up to our standards, so we’re kind of rattled tonight.
NHL・8 DAYS AGO
WGR550

The Buffalo Sabres were blown out of their own building on Thursday night, losing 5-0 to the Calgary Flames at KeyBank Center. Pat Malacaro has a complete recap:
NHL・8 DAYS AGO

Robert Hagg didn’t practice, but Granato described it as a maintenance day and he will be back full go Saturday. Colin Miler was at practice after not finishing Thursday’s game.
NHL・8 DAYS AGO
WGR550

The Sabres were coming off of two high-powered performances where the offense was humming, but still took losses because they couldn’t get the goaltending they needed to win the game. TJ Luckman shares his three observations from Wednesday’s game:
NHL・2 DAYS AGO
WGR550

The Buffalo Sabres are beginning a strect of five games in seven days with a meeting against the New York Rangers at Madison Square Garden. The two teams are tied 1-1 after first period.
NHL・6 DAYS AGO
WGR550

Three quick goals early in the second period was too much for the Buffalo Sabres to overcome in the 7-4 loss to the Columbus Blue Jackets on Monday night at KeyBank Center.
NHL・5 DAYS AGO
WGR550

A goal with less than one second remaining in regulation helped the New York Rangers defeat the Buffalo Sabres, 5-4, on Sunday night at Madison Square Garden. Pat Malacaro has a complete game recap:
NHL・6 DAYS AGO
WGR550

Casey Mittelstadt back practicing for Sabres

The Buffalo Sabres play host to the Boston Bruins on Wednesday night, but Casey Mittelstadt joined the team on the ice for the first time since suffering an injury on opening night. Paul Hamilton has more:
NHL・3 DAYS AGO
buffalohockeybeat.com

BUFFALO – After Craig Anderson suffered an upper-body injury Nov. 2, the Sabres said he was day to day. But the veteran goalie, whose absence has become glaring as the rebuilding team keeps struggling, is still sidelined. “Because of our initial report, based on where we’re at, it is a...
NHL・1 DAY AGO
WGR550

The Sabres worked hard and smart to beat Montreal.

Tokarski came in and played the final 40 minutes against Boston and didn’t give up a goal until very late. That means in his last 100 minutes he’s given up just two goals and made 49 saves. That’s a 1.20 goals against and .961 save percentage.
NHL・8 HOURS AGO