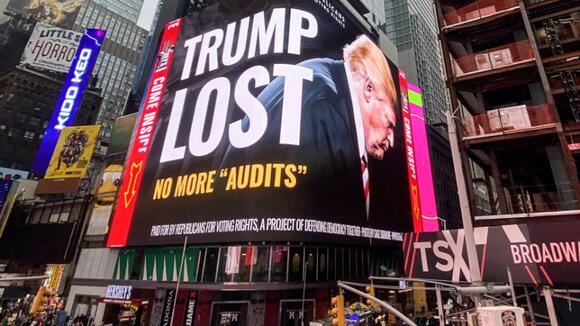 (NEXSTAR) – A Republican-led advocacy group is calling for high-ranking Republicans to end their audits of the 2020 election. And they’re doing it with huge billboards that read “Trump Lost.”

Republicans for Voting Rights, an organization operating under Defending Democracy Together, has launched a quarter-million-dollar campaign to erect dozens of these billboards in major markets across the country, including one digital billboard right in the heart of Times Square.

On Twitter, the Republican Accountability Project — a sister organization of Republicans for Voting Rights (RVR) — confirmed the Times Square billboard was up as of Wednesday. A representative for the group said “dozens” of similar digital billboards were already running as of Thursday. More traditional static billboards, too, are scheduled to follow.

Many of the billboards are, or will soon be, situated in states “where there’s discussion about an audit of the 2020 election,” according to the Republican Accountability Project (RAP) website. Such billboards are going up in Arizona, Florida, Georgia, Michigan, Pennsylvania, Texas, Virginia and Wisconsin, per the RVR.

“The 2020 election was secure and fair,” said RVR Director Amanda Carpenter in a statement shared with Nexstar. “These sham audits are a waste of time and money.”

Trump himself has repeatedly urged Republican lawmakers to conduct audits of vote counts, despite allegations of voter fraud during the 2020 election having been dismissed by numerous state election officials and even Christopher Krebs , then-head of the Cybersecurity and Infrastructure Security Agency (CISA) during the Trump administration.

Despite these certifications, Republican politicians and supporters of Donald Trump have called for audits in multiple states, many at the cost of taxpayers. A few of the most notable audits conducted in Georgia and Maricopa County, Arizona, confirmed President Biden’s win, and in some cases increased his margin of victory.

Republican Rep. Liz Cheney (R-Wyo.), has also called on Republicans to stop “perpetuating the Big Lie” in a recent tweet directed at Rep. Steve Scalise (R-La.), who, during an appearance on Fox News, refused to say the election wasn’t “stolen” from Trump.

“Millions of Americans have been sold a fraud that the election was stolen,” Cheney tweeted Sunday. “Republicans have a duty to tell the American people that this is not true. Perpetuating the Big Lie is an attack on the core of our constitutional republic.”

All of RVR’s billboards — both digital and static — will be live as of next week, according to the group.

Defending Democracy Together, the anti-Trump advocacy organization under which the RVR and RAP operate, was founded amid the Trump administration by “lifelong conservatives and Republicans” including Bill Kristol, who served as chief of staff under Vice President Dan Quayle, and Sarah Longwell, a former chair of the Log Cabin Republicans.

“We are Republicans, former Republicans, and conservatives committed to protecting every American’s right to vote,” explains a message that appears on the Defending Democracy Together website.

Get the free WAVY News App, available for download in the App Store and Google Play , to stay up to date with all your local news, weather and sports, live newscasts and other live events.

For the latest news, weather, sports, and streaming video, head to WAVY.com.

Most Utah voters say Trump should not run again in 2024: poll

A majority of voters in Utah believe that former President Donald Trump should not run again, according to a new poll released on Wednesday.
UTAH STATE・9 HOURS AGO
Business Insider

Perdue, a former senator who was on the ballot in Georgia with Trump, is running against Republican Gov. Brian Kemp in 2022.
GEORGIA STATE・4 HOURS AGO
Fox News

MSNBC contributor suggests ‘federal takeover’ of elections in Republican states: 'This is an emergency'

An MSNBC political contributor said Tuesday that the Biden administration should send the government to Republican states for a "federal takeover" of elections, arguing that such a drastic measure is supposed to be taken if it is determined a state is "violating people’s civil liberties." "This is an emergency,"...
PRESIDENTIAL ELECTION・11 HOURS AGO
USA TODAY

While Democrats haggle over policy, Republicans in thrall to Trump are acting out a meaner, more dangerous version of World Wrestling Entertainment.
POTUS・1 DAY AGO

A group led by longtime GOP strategist Bill Kristol and a group of fellow so-called Never Trump Republicans raised more than $35 million during the 2020 campaign. The nonprofit organization, Defending Democracy Together, spent millions on projects attacking then-President Trump during the same period. Its biggest single contribution, $6 million,...
PRESIDENTIAL ELECTION・2 DAYS AGO
The Atlantic

What the GOP Does to Its Own Dissenters

Late at night on the second Tuesday of January, Peter Meijer, a 33-year-old freshman congressman from West Michigan, paced the half-unpacked rooms of his new rental apartment in Washington, D.C., dreading the decision he would soon have to make. Six days earlier, Meijer had pulled a smoke hood over his...
CONGRESS & COURTS・1 DAY AGO
Newsweek

A photo of a billboard insulting the President and Vice President has left the internet divided.
PRESIDENTIAL ELECTION・2 DAYS AGO
Sun-Journal

In the months after President Donald Trump lost the November election, lawyer Sidney Powell raised large sums from donors inspired by her fight to reverse the outcome of the vote. But by April, questions about where the money was going – and how much there was – were helping to sow division between Powell and other leaders of her new nonprofit, Defending the Republic.
PRESIDENTIAL ELECTION・2 DAYS AGO

Trump gets wish in Georgia, sparks ‘a political civil war’

ATLANTA (AP) — Less than a year after losing the presidency, Donald Trump has set out to reshape the GOP in his image across the nation’s top political battlegrounds, sparking bitter primary battles that will force candidates and voters to decide how much to embrace Trump and his grievances. But...
GEORGIA STATE・2 DAYS AGO
Washington Post

Benjamin Ginsberg, a veteran Republican election lawyer, just issued a stark warning to lawmakers in his own party: If you don’t act now to protect our system, the losing candidate in the 2024 presidential election might seek to overturn the will of the people — and succeed. Opinions to start...
PRESIDENTIAL ELECTION・2 DAYS AGO
Washington Post

In Georgia, Republicans’ Faustian bargain with Trump is catching up with them

Anyone who thinks the Republican Party is some kind of well-oiled juggernaut ready to steamroll Democrats in November might want to check out what’s happening in Georgia, where the GOP is busy trying to steamroll itself. Opinions to start the day, in your inbox. Sign up. Gov. Brian Kemp (R),...
GEORGIA STATE・2 DAYS AGO
The Guardian

It is a festive family photo with seven broad smiles and a Christmas tree. But one other detail sets it apart: each member of the Massie family is brandishing a machine gun or military-style rifle. The photo was tweeted last week by Thomas Massie, a Republican congressman from Kentucky, with...
POTUS・2 DAYS AGO

In this daily series, Newsweek explores the steps that led to the January 6 Capitol Riot. On Saturday, December 5, Donald Trump flew to Valdosta, Georgia, to speak at a rally to support two Republican party candidates for the Senate, Kelly Loeffler and David Perdue. It was his first rally since the election, a month earlier.
PRESIDENTIAL ELECTION・3 DAYS AGO
The Guardian

The measure would set the same hours and days for early voting across every state community and have some communities alter how they count absentee ballots.
PRESIDENTIAL ELECTION・2 DAYS AGO
Business Insider

Trump has criticized Katie Britt, saying she's "not in any way qualified and is certainly not what our Country needs or not what Alabama wants."
CULLMAN, AL・5 DAYS AGO

Massachusetts Gov. Charlie Baker, a Republican who had resisted his party's pull toward Donald Trump, announced Wednesday that he won't see re-election to a third term. The decision was first reported by The Boston Globe. In a statement, Baker and Lt. Gov. Karyn Polito cited the ongoing Covid-19 pandemic as...
MASSACHUSETTS STATE・7 DAYS AGO
POLITICO

The Jan. 6 panel has voted to hold another former Trump official in contempt: Jeffrey Clark.

However, Clark will come back to the panel for a second deposition. The vote: The select panel investigating the Jan. 6 insurrection voted unanimously Wednesday to hold former Justice Department official Jeffrey Clark in criminal contempt of Congress, sending the measure to the full House for consideration as soon as Thursday. But Clark also informed the committee he plans to assert his Fifth Amendment right against self-incrimination, complicating the committee’s calculus.
PRESIDENTIAL ELECTION・7 DAYS AGO
Brookings Institution

Trump’s judicial campaign to upend the 2020 election: A failure, but not a wipe-out

One sign of a healthy democracy is a judiciary that applies the law independently, even in cases involving powerful partisan interests. When President Donald Trump tried to enlist the courts in his campaign to overturn the results of the election, state and federal judges applied the law as they understood it. They did so despite Trump’s history of lashing out at judges who crossed him during his 2016 campaign and later.
PRESIDENTIAL ELECTION・8 DAYS AGO
NBC News

Dr. Oz, celebrity physician, launches campaign for Senate in Pa. as a Republican

Dr. Mehmet Oz, a physician known to national TV audiences, announced Tuesday that he will run for the Senate in Pennsylvania as a Republican, throwing more uncertainty into the closely watched primary. "We are angry at our government and at each other," Oz wrote in a guest column published by...
PENNSYLVANIA STATE・8 DAYS AGO