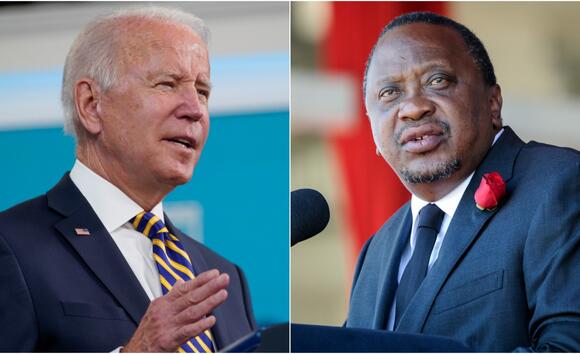 Biden will meet with foreign leaders who share U.S. interests because the discussions also provide him with an opportunity to express concerns, said senior administration aides Thursday.

Kenyatta was outed in the Pandora Papers dump this month for holding roughly $30 million in secret offshore accounts with his family. In total, 330 current and former officials were caught up in the leak of 12 million documents and files to reporters around the world.

"The United States, through various departments and agencies on the ground and our embassy in Nairobi, have and will continue to build off of our current efforts with the Kenyans to bring additional transparency and accountability to domestic and international financial systems," an administration aide said.

The pair's conversation will be dominated by global and regional security topics, according to officials. Kenya neighbors both Ethiopia — where the government and Tigray military forces have clashed for almost a year, leading to famine-like conditions — and Somalia, which is home to Islamist insurgent group al Shabab. Kenya, too, is the current United Nations Security Council president.

"Kenyatta is very much a senior elder, an elder statesman, in the region," an aide said when pressed on whether Kenyatta could exert any influence on Ethiopian Prime Minister Abiy Ahmed. "He is a leader, and we think that his voice is important, an important voice that resonates broadly."

Biden will also announce U.S. plans to donate more than 17 million doses of the Johnson & Johnson COVID-19 vaccine to the African Union. The U.S. has already gifted 50 million doses to the organization, with Thursday's donation meaning the U.S. has given away more than half the J&J shots it purchased for its own domestic vaccination program.

Biden offered an update on his White House's COVID-19 response Thursday too, as only 57% of the public reports being fully vaccinated. The Biden administration has touted the effectiveness of its mandates, attributing a 20 percentage-point increase in people getting their shots to the policies despite them being in regulatory limbo.

"Let's be clear — vaccination requirements should not be another issue that divides us," the president said.

'It's just a cold': Biden insists he is all right after croaky voice during jobs address

Sparks flew on the set of ABC's "The View" Friday as co-hosts clashed over President Biden's decision to restart the Trump-era "Remain in Mexico" policy. During a segment discussing Biden's decision, co-host Ana Navarro butted heads with Sunny Hostin and guest host America Ferrera over the policy, with the latter two excoriating Biden for breaking his campaign promise to end it, and the former arguing that the policy discouraged people from attempting to make the dangerous journey to the southern U.S. border.
PRESIDENTIAL ELECTION・12 HOURS AGO

President Joe Biden and First Lady Jill Biden decorated the White House for the holidays. The State Dining Room celebrated the “Gift of Family,” with stockings hanging over a stunning fireplace to represent each member. Six adorable stockings were hung for each of their grandchildren, but Hunter Biden’s daughter, who...
PRESIDENTIAL ELECTION・1 DAY AGO
The Independent

Asked about a shocking new claim that Donald Trump tested positive for Covid-19 before a presidential debate in 2020, Joe Biden had a blunt response.“I don’t think about the former president,” he told a press conference on Wednesday – before calmly turning and walking away.Mr Biden was being asked about a story from an upcoming book by Mark Meadows, Donald Trump’s last presidential chief of staff. In The Chief’s Chief, Mr Meadows recounts that the ex-president – known as “the former guy” in the Biden White House – was departing for a Pennsylvania rally three days before the debate...
PRESIDENTIAL ELECTION・1 DAY AGO
Newsweek

Dec 1 (Reuters) - U.S. Vice President Kamala Harris' senior adviser and chief spokesperson Symone Sanders is leaving by the end of the year, the latest high-profile departure from her office amid growing concerns over her communication strategy and how well the first woman to hold the job is being positioned for future political roles.
PRESIDENTIAL ELECTION・1 DAY AGO
WashingtonExaminer

President Joe Biden said Friday that he is preparing ways to halt a potential incursion into Ukraine by Russian President Vladimir Putin as Moscow masses troops along Ukraine’s border.
POTUS・14 HOURS AGO
The Independent

China s Communist Party took American democracy to task on Saturday, sharply criticizing a global democracy summit being hosted by President Joe Biden next week and extolling the virtues of its governing system.Party officials questioned how a polarized country that botched its response to COVID-19 could lecture others and said that efforts to force others to copy the Western democratic model are “doomed to fail.”Tian Peiyan, the deputy director of the party's Policy Research Office, said the pandemic exposed defects in the American system. He blamed the high COVID-19 death toll in the U.S. on political disputes and a...
FOREIGN POLICY・1 HOUR AGO
San Diego Union-Tribune

If the president needs to sweat the details before he can end the program, as courts have ruled, he must do so
SAN DIEGO, CA・1 DAY AGO

The president promised to "shut down" the virus, but it continues on.
PRESIDENTIAL ELECTION・1 DAY AGO
POLITICO

With Omicron emerging in countries deprived of vaccines, the failure to develop a strategy to inoculate the world looms large.
POTUS・2 DAYS AGO
Washington Times

WASHINGTON — President Joe Biden, Vice President Kamala Harris and their spouses marked a “family” celebration of Hanukkah at the White House Wednesday, with the first second gentleman and Jewish spouse of a vice president, Doug Emhoff, joining in lighting the menorah. Speaking to more than 150 invited guests, including...
POTUS・2 DAYS AGO

The president’s success in office will be tied to how he handles the pandemic. The emergence of Omicron makes that clear again.
PRESIDENTIAL ELECTION・2 DAYS AGO
POLITICO

With help from Daniel Lippman, Nahal Toosi, Andrew Desiderio, Bryan Bender and Phelim Kine. Send tips | Subscribe here | Email Alex | Email Quint. It’s Nov. 30: Do you know where your land mine policy reversal is?. You may recall that back in Jan. 2020, then-President DONALD TRUMP expanded...
PRESIDENTIAL ELECTION・3 DAYS AGO
The Guardian

Hours before the deadly attack on the US Capitol this year, Donald Trump made several calls from the White House to top lieutenants at the Willard hotel in Washington and talked about ways to stop the certification of Joe Biden’s election win from taking place on 6 January. The former...
PRESIDENTIAL ELECTION・4 DAYS AGO
Newsweek

The Jan. 6 defendant repeatedly cried during his FBI interview in which he said he attacked the police officer. His lawyer now wants the interview thrown out.
PUBLIC SAFETY・4 DAYS AGO