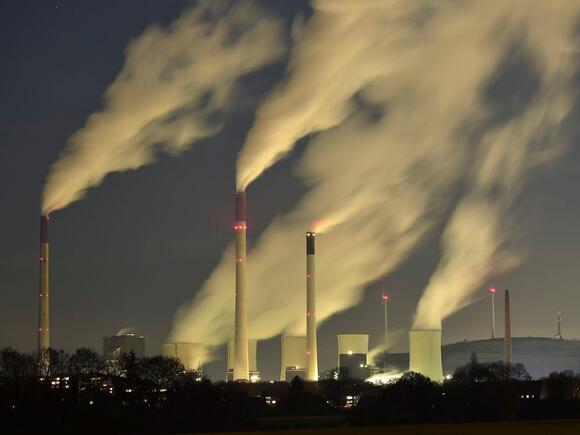 You're paying $3.29 per gallon to fill your car when it cost $2.29 at the start of the year. Your online orders are arriving way later than usual. And as winter nears, it's costing more to heat your home.

The complex web that powers the world is badly tangled. A combination of supply-chain bottlenecks, government policies, and ill-preparedness has left countries struggling to keep their economies running at full steam.

That energy shortage could erase a key recovery driver. The holiday season tends to bring a wave of consumer spending as people shop for holiday gifts. Consumer spending counts for roughly 70% of economic activity, but only when there are goods for people to spend money on.

Almost every major economy has contributed to the mess. China lacks an adequate supply of coal due to slowed mining and a refusal to import coal from Australia . That's led to energy rationing and factory blackouts.

The crunch doesn't stop there. Frackers in the US haven't returned to pre-crisis output, leaving oil supply well below the world's massive demand. Russia has worsened the problem by deciding not to send its natural gas to the European Union.

The insufficient amount of natural gas has dragged the world's power plants back in time. Oil, which is traditionally used much less often in electricity generation than coal or gas, is back in vogue as countries look for other ways to fuel their economies, the International Energy Agency said Thursday.

But that's also in short supply. OPEC is sticking with the production increases it scheduled before the crunch, essentially telling the rest of the world that they aren't coming to the rescue. That's already sent prices soaring. Oil now costs more than $81.25 per barrel, the most since 2014.

The world's energy sources are all coming up dry. There's no quick fix, and the pressures "are not going to relent in the coming decades," the IEA said in its latest World Energy Outlook report.

The energy crunch is adding to an everything crunch

The energy crunch is having knock-on effects elsewhere . Commodities that China exports are in low supply, leading production prices to skyrocket. Coal prices have more than doubled since July. A silicon shortage has hampered semiconductor manufacturing . And companies that rely on Chinese factories to assemble their products face even larger backlogs than before.

The risks go beyond gas prices and heating costs. Advanced economies are already mired in supply-chain struggles. Blackouts at factories in China, India, and other manufacturing giants have delayed shipments. When products finally do reach the US on cargo containers, huge backlogs at ports have left vessels idling off the coast. Once goods are finally offloaded, a shortage of truck drivers has held up deliveries even more.

Solving the bottlenecks is no easy task. The disruptions "will get worse before they get better," Moody's Analytics said Monday.

"As the global economic recovery continues to gather steam, what is increasingly apparent is how it will be stymied by supply-chain disruptions that are now showing up at every corner," the firm added.

New efforts aim to alleviate the pressure. The White House announced Wednesday that the Port of Los Angeles will start processing ships 24/7 . Corporations including Walmart, UPS, and FedEx will also shift to all-day-every-day models to ease the holdup.

It all comes back to inflation

While Americans are still able to turn their lights on and fuel their cars, they're feeling the heat in their wallets.

Up until September, inflation looked to be cooling off just as the Biden administration and the Federal Reserve expected. Price growth slowed in July and again in August, yet the energy crunch seems to be thwarting the return to normal.

Prices rose 0.4% in September , the Bureau of Labor Statistics said Wednesday, accelerating from the pace seen in August. Of the sectors powering the jump, energy reigned supreme. The segment saw prices rise 1.3% in September, exceeding the inflation seen in food, used cars, and accommodation costs like hotels and rent.

That's directly affected what Americans are paying at the pump. The average price-per-gallon of gasoline in the US rose to $3.29 on Wednesday, according to GasBuddy, marking the highest level in seven years.

If governments can't untangle their supply chains fast enough, you can expect price growth to stay worryingly strong. The post-pandemic normal might just include shipping delays, expensive refueling, and pricier goods across the board.

Hold on to your wallet. Due to inflation and prices surging for natural gas, heating oil, and other fuels, you will see a significant rise in your bills this winter. So if you've already opened your...
ENERGY INDUSTRY・2 DAYS AGO
Markets Insider

Lumber prices are on the rise once again and have doubled from summer lows. A confluence of factors is putting upward pressure on the red-hot commodity but experts say lumber will normalize. Lumber futures rose for the fifth-straight session on Friday, hitting $930 per thousand board feet. The price of...
INDUSTRY・1 DAY AGO
Washington Post

Sen. Ted Cruz wants to sanction a natural gas pipeline — but not because of climate change

Good morning and welcome to The Climate 202! We survived another week of congressional dysfunction. But first:. Sen. Ted Cruz (R-Tex.) is crusading against Nord Stream 2. Climate isn't his main concern. For months, Sen. Ted Cruz (R-Tex.) has been stalling the confirmation of dozens of President Biden's foreign policy...
CONGRESS & COURTS・2 DAYS AGO
Markets Insider

China's birth rate has hit a record low. That could shake the world economy.

A demographic crisis is rumbling in the world's second-biggest economy, with China's birth rate at a record low. It stands to destabilize a key engine of the world economy, and could shake China's closest economic partners. It could also push up global inflation as the well of cheap goods and...
BUSINESS・1 DAY AGO

The economy's problems are way bigger than a labor shortage. Over 12 million people want a better deal right now.

Americans aren't happy with the economy: Over 12 million people are either long-term unemployed, seeking work to no avail, or employed part time.
PATCHOGUE, NY・2 DAYS AGO
MIT Technology Review

The US crackdown on Chinese economic espionage is a mess. We have the data to show it.

The Department of Justice has no definition of what constitutes a China Initiative case. The initiative was supposed to focus on economic espionage, but it has increasingly charged academics with "research integrity" issues. Nearly 90% of the defendants charged are of Chinese heritage. A visiting researcher at UCLA accused of...
FOREIGN POLICY・3 DAYS AGO
MarketWatch

The question for markets is less about when the Fed will hike and more about, how high.
BUSINESS・2 DAYS AGO
MarketWatch

U.S. stocks opened modestly higher Friday morning, as investors parsed a jobs report that came in much weaker than expected on a headline basis but appeared to offer some fodder for bullish investors worried about a rapid pace of interest-rate increases by the Federal Reserve. The Labor Department reported that a mere 210,000 new jobs were created in November, well below estimates from economists polled by The Wall Street Journal for a gain of 573,000 new jobs. However, the report did have some strong points. The jobless rate fell to 4.2% from 4.6%, and touched a new pandemic low. Economists...
STOCKS・2 DAYS AGO

The U.S. economy added 210,000 jobs in November, far below economists' expectations, while the unemployment rate plunged 0.4 percentage points, according to data released Friday by the Labor Department.
BUSINESS・2 DAYS AGO
MarketWatch

A huge part of the U.S. economy grew in November at a record pace, ISM finds

Service-oriented businesses such as banks, retailers, drug stores and the like grew in November at the fastest pace on record, a new survey showed, even as companies grappled with major shortages of labor and supplies.
CHICAGO, IL・2 DAYS AGO
The Guardian

Ofgem to review response to Storm Arwen, removes compensation cap for power-cut homes – as it happened

Subscribe today to the Washington Examiner magazine and get Washington Briefing: politics and policy stories that will keep you up to date with what's going on in Washington. SUBSCRIBE NOW: Just $1.00 an issue!
ENERGY INDUSTRY・2 DAYS AGO
Markets Insider

'We recognize that our stakeholders have differing views on China - BlackRock takes those concerns seriously,' the company said in a statement.
ECONOMY・2 DAYS AGO
MarketWatch

The US added just 210,000 jobs in November, badly missing the median estimate of 550,000 payrolls. The unemployment rate tumbled to 4.2% from 4.6%. That came in below economist estimates. The report shows hiring slowing as the Delta wave subsided and Omicron fears emerged. The hiring recovery stumbled in November...
ECONOMY・2 DAYS AGO
Markets Insider

Danish asset manager Saxo Bank has released its Outrageous Predictions list for markets in 2022. They include Spotify stock sliding as musicians use NFTs to build revenue share. Another prediction sees US inflation soaring to 15% and the Fed moving too late in hiking interest rates. NFTs taking over the...
STOCKS・2 DAYS AGO
Markets Insider

US stocks soared on Thursday as investors shrugged off concerns of a second Omicron case found in Minnesota. The Dow Jones soared more than 600 points while the S&P 500 surged more than 1.6%. Apple fell on concerns that it's experiencing slowing iPhone demand for the holiday season. US stocks...
STOCKS・3 DAYS AGO
MarketWatch

Veteran trader Mark D. Cook, who passed away recently, closely monitored the market's health and was convinced that U.S. stocks are due for a major hit.
STOCKS・3 DAYS AGO
Markets Insider

Alibaba, Tencent and other Chinese techs slide in Hong Kong after Didi bows to pressure to delist in New York

Chinese techs in Hong Kong fell after ride-hailing giant Didi bowed to pressure to pull its US offering just months after its blockbuster IPO.
ECONOMY・2 DAYS AGO
Markets Insider

Yellen previously said the end of the pandemic would bring workers back, but data shows millions have gone into business for themselves or retired.
BUSINESS・3 DAYS AGO