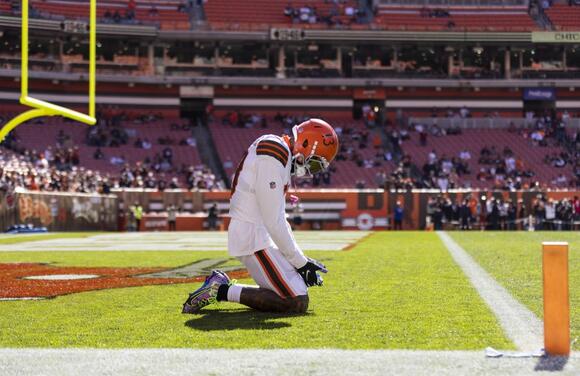 The Cleveland Browns have an awesome offense led by Baker Mayfield , Nick Chubb, and Kareem Hunt. Notice how we didn’t mention Odell Beckham Jr. there? This team dominated in the running game and has yet to use OBJ in the same manner that once made him a worldwide superstar.

Since they have yet to find the unstoppable connection that made Beckham so dominant when he was paired with Eli Manning, there have been seemingly constant trade rumors surrounding the three-time Pro Bowl receiver.

Any trade involving Beckham is uniquely complicated in that he hasn’t had the same success since 2016, despite still being just 28. There are absolutely teams out there who believe they can plug OBJ into their offense and recoup the explosive potential he once had.

It’s likely one of the same reasons why the Browns’ general manager Andrew Berry has been reluctant to swing a trade for the once iconic NFL receiver. The Browns have always hoped Beckham would tap into his early days of being unstoppable, only now with Mayfield. Whether it’s due to their offensive style, or something else, Beckham has simply not been the game-breaker he once was.

So, despite looking like contenders, maybe the Browns should seriously consider their options. How much would a team be willing to offer for an Odell Beckham Jr. trade? Here are four landing spots for the talented wideout.

The San Francisco 49ers have invested some premium draft picks into their receivers in the past few years, but so far it’s just Deebo Samuel, George Kittle, and then a major dropoff in production. Last year’s first-round pick Brandon Aiyuk has flashed at times but hasn’t been able to put it all together consistently.

Although they don’t have a ton of 2022 draft capital, whether it’s to help veteran Jimmy Garoppolo , or the kid Trey Lance , the 49ers could look to add another weapon for whoever is under center. Enter Odell Beckham Jr. Head coach Mike Shanahan would have the time of his life, building gameplans for what could be a kickass offense. 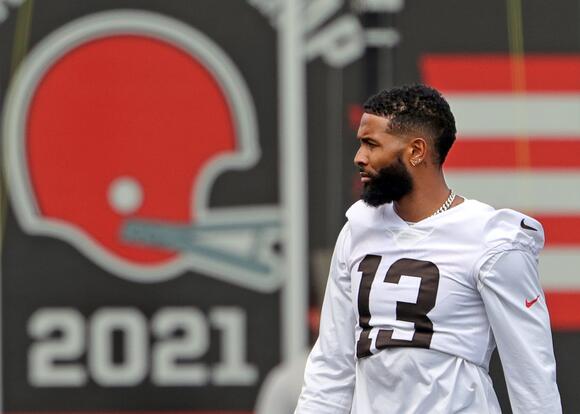 Not only do the New Orleans Saints need a better wide receiver group for Jameis Winston , but Odell also happens to be from Baton Rouge, Louisiana. Like pretty much all the best receivers in the NFL these days, Beckham also starred with the LSU Tigers. It’s the perfect match.

Maybe the Saints could even pull off a wide receiver swap with the Browns if Michael Thomas intrigues them. Who are we kidding? Of course Thomas is intriguing, but when will he be healthy enough to help Baker Mayfield?

We’ve seen the Green Bay Packers make a small move to try and make amends with Aaron Rodgers , by bringing in Randall Cobb before the season began. If Rodgers thawed the ice and talked to GM Brian Gutekunst about adding Odell Beckham Jr., maybe the decision-maker would try and accommodate his Super Bowl-winning QB here too?

Beckham would complement Davante Adams well, allowing Randall Cobb to still operate out of the slot position, forming a nasty trio for AR12 to throw darts to. With Adams set to be a free agent in 2022, maybe an early look at another receiver who was once considered the game’s best wouldn’t be such a bad idea? 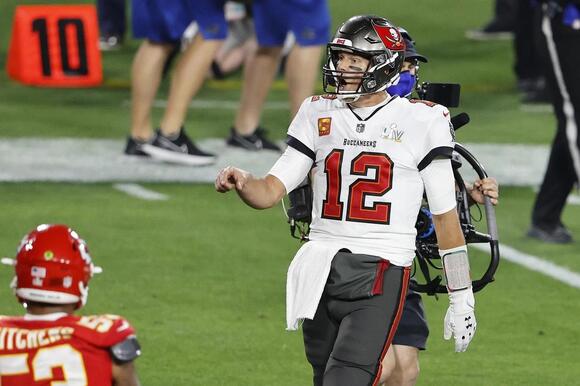 I could be wrong, but it doesn’t seem like there’s any current animosity toward the New York Giants for trading Odell Beckham Jr., on the other hand, he’s never experienced the same fame and fortune since. Maybe there’s a small part of OBJ that would get amped to face his former team twice a year by suiting up for the Philadelphia Eagles instead.

Rookie receiver DeVonta Smith looks like the real deal, quarterback Jalen Hurts is still developing, but he’s making strides in his game with every start. Adding a veteran receiver such as Beckham could give Hurts another weapon capable of winning his one-on-one battles outside the numbers. Philly should at least look into the idea if they feel it would help, not hinder, Hurt’s progress.

Odell Beckham Jr. has had some major changes in his life recently, but the biggest one is coming in the near feature. Beckham’s longtime girlfriend, fitness trainer and Instagram model Lauren Wood, shared some photos on Sunday that revealed she is pregnant. The Los Angeles Rams star was among those who commented on the photos of him and Wood, writing, “Can’t wait baby!” You can see the photos below:
FOOTBALL・10 DAYS AGO
The Spun

The Saints have reportedly decided to bring back receiver Kevin White. White was waived from the 53-man roster a few days ago before New Orleans’ game against the Philadelphia Eagles but now, he looks to be back in the fold. White has had a few opportunities this season but hasn’t...
NFL・9 DAYS AGO
ClutchPoints

The Minnesota Vikings pillaged the Green Bay Packers on Sunday, 34-31 to register arguably their biggest of the season and resuscitate their flatlining hopes to advance to the NFL Playoffs. Quarterback Kirk Cousins starred for the Vikings, finishing with 341 yards and three touchdowns as he kept pace with Packers...
NFL・9 DAYS AGO
The Spun

For the past three weeks, Saints running back Alvin Kamara has been sidelined with a knee injury. While there’s no clear timetable for his return, the All-Pro did just post a cryptic message on Twitter. Moments ago, Kamara tweeted “I’m on it.”. There’s no telling if this is Kamara’s way...
NFL・6 DAYS AGO

It appears that as the drama dust between the Cleveland Browns and Odell Beckham Jr. has settled, The Browns have been struggling on the field and with the fans. Odell Beckham Jr. however was released by The Browns, cleared waivers then was picked-up by The Los Angeles Rams where his homie LeBron is, life seems to be on the positive upswing. Odell Beckham Jr. who has agreed to be paid 100% in for the 21/22 season from The Rams in Bitcoin through CashApp is now to adding to the positivity going on with the 29 year old wide receiver, Odell Beckham Jr., professionally, as congratulations are in order for OBJ personally as it is being reported that he is expecting his first baby.
NFL・9 DAYS AGO
The Spun

The Green Bay Packers learned on Wednesday that starting quarterback Aaron Rodgers will miss Sunday’s game against the Kansas City Chiefs. The 2020 MVP tested positive for COVID-19 and is not vaccinated, meaning he’ll miss this weekend’s match-up and be forced to quarantine for the next 10 days. Although much...
NFL・28 DAYS AGO
ClutchPoints

Following the news of New Orleans Saints wide receiver Michael Thomas declaring that he is done for the 2021 NFL season, Sean Payton shared his thoughts and didn’t hold back in expressing his views of the current state of his team’s receiving corps. Via Katherine Terrell of The Athletic:. Payton...
NFL・29 DAYS AGO
Larry Brown Sports

Odell Beckham Jr. chose to sign with the Los Angeles Rams after they, along with the Green Bay Packers, were said to be one of two finalists. However, we learned on Thursday that another top NFC team was squarely in the mix. Sean Payton was asked on “The Dan Patrick...
NFL・14 DAYS AGO

Travis Kelce and the Chiefs may have this Sunday off, but the tight end still made his weekend about football. Kelce and girlfriend Kayla Nicole attended Sunday’s Eagles game against the Giants at MetLife Stadium in New Jersey, where they got to watch his older brother, center Jason Kelce, in action.
NFL・4 DAYS AGO
inquirer.com

It looks like the Madden Curse has some competition, thanks to Hall of Famer Peyton Manning and his younger brother, Eli. Since the launch of their Monday Night Football alternate telecast this season on ESPN2, the Manning brothers have featured six current NFL players as guests. In every case, that player and his team have gone on to lose the following week — a notable streak in a league that’s often a prisoner to superstition.
NFL・24 DAYS AGO
ClutchPoints

It was an ugly game between the Seattle Seahawks and the Green Bay Packers. Neither team looked great, but Seattle completely fell apart in the closing minutes of the contest. DK Metcalf became so frustrated, he was ejected from the game for attempting to fight two Packers players, then tried sneaking back onto the field.
NFL・17 DAYS AGO
thespun.com

Odell Beckham Jr’s second game with the Los Angeles Rams is going much better than his first. The superstar wide receiver just caught his first touchdown pass in more than a year. Beckham was found on a deep pass by Rams quarterback Matthew Stafford. Beckham now has three catches for...
NFL・4 DAYS AGO

The announcement that Antonio Brown would be suspended multiple games for violating the NFL's COVID-19 policies drew attention to the decided disparity in punishment for all-pro quarterback Aaron Rodgers' similar transgression.
NFL・2 HOURS AGO
The Whale 99.1 FM

The Buffalo Bills Quarterback room will have one open seat this year as they prepare for their Monday Night matchup against the New England Patriots. On Tuesday, the Bill announced that backup quarterback Jack Fromm was signed by the New York Giants from the Bills practice squad. Fromm was a...
NFL・1 DAY AGO
ClutchPoints

After almost a year-long break, veteran running back Adrian Peterson found his way back to the league once again after being signed by the Tennessee Titans in early November. Due to the season-ending injury of star rusher Derrick Henry, Mike Vrabel needed the contribution of the 36-year-old who eventually saw action in three games.
NFL・8 DAYS AGO
hypefresh.co

Los Angeles Rams Odell Beckham Jr. sparks friendly beef with Green Bay Packers wide receiver Davante Adams. The Packers came close to signing Beckham when he was a free agent after being released by the Cleveland Browns. They were considered one of the top contenders for the veteran receiver. The Packers at the time, held one of the best records in the entire league 7-2. Not to mention, having one of the best quarterbacks in the NFL, Aaron Rodgers.
NFL・2 DAYS AGO

Odell Beckham Jr. will reportedly get a significant bump in snaps for the Rams on Sunday. In his debut, Beckham only was on the field for 15 plays. This week, LA’s newest star will see a lot more action against the Green Bay Packers. According to FOX Sports’ Jay Glazer,...
NFL・4 DAYS AGO
Yardbarker

Odell Beckham Jr. signed a one-year deal with the Los Angeles Rams a little under two weeks ago that can pay him up to $4.25 million with the majority of the deal being heavily based upon incentives. Beckham announced on Twitter he's taking the new salary that he signed with...
NFL・10 DAYS AGO
Los Angeles Times

Rams and Odell Beckham Jr. remain 'a work in progress'

Rams coach Sean McVay said he spent the off week reflecting on a loss to the 49ers and resisting the urge to make overarching changes.
NFL・9 DAYS AGO
FanSided

Packers could be screwed next season, and not because of Aaron Rodgers

The Green Bay Packers cap situation doesn’t look ideal for next season, but it has nothing to do with Aaron Rodgers. Rodgers has a potential opt-out after 2022, so it’s quite possible the Packers shop him if he’s still not happy in Green Bay. However, it’s Rodgers’ teammate that could cost the Packers a pretty penny, and they don’t have much of an option but to pay him.
NFL・8 HOURS AGO