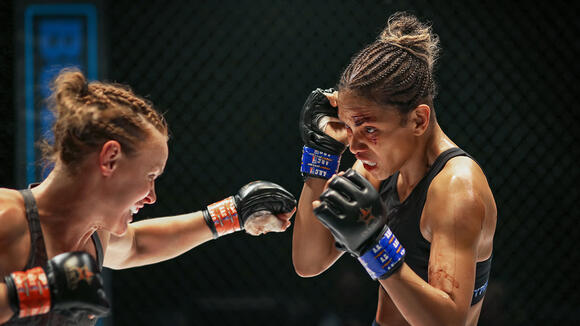 Written by Michelle Rosenfarb and produced by, among others, Basil Iwanyk ( John Wick , Sicario ), the story follows Berry’s Jackie Justice, a mixed martial arts fighter who has a fall from grace and leaves the sport. Working as a cleaner and with a surprise — Manny (Danny Boyd Jr.), the son she gave up as an infant — on her doorstep, the down-on-her-luck Justice is still boiling with rage over her lost past life.

But when she’s persuaded to participate in a brutal underground organized fight by her manager and boyfriend, Desi (Adan Canto), she snags the attention of a fight league promoter played by Shamier Anderson. With the promise of a return to the mat, Justice isn’t pulling any punches in her fight to get back to her old world and old life, while also exploring her new role as a mother.

The new two-minute trailer teases the bloody, black-eyed and bruised return of Berry’s MMA fighter as not a second chance, but a last chance, as she retrains her mind and body to re-enter the Octagon and surprise everyone who has counted her out.

Bruised is slated to release in theaters on Nov. 17 before dropping on Netflix on Nov. 24.

Halle Berry, who won an Oscar two decades ago for Monster’s Ball (a landmark win — the first ever for a Black actress in a leading role), has had a mixed bag of acting credits since then. The chief virtue of Bruised, her directorial debut, is that it shows her acting strength is undiminished. But while viewers will be impressed by Berry’s performance, other elements of the film are problematic. Arriving after a lengthy delay in its release because of the pandemic, the drama will follow its world premiere at AFI Fest with a brief theatrical run before its streaming...
MOVIES・13 DAYS AGO
The Hollywood Reporter

Dwayne Johnson is going from leading man to loyal sidekick in the first trailer for DC League of Super-Pets. The animated film voice stars Johnson as Krypto, the pet and sidekick of Superman. When Superman and the Justice League go missing, Krypto enlists the help of a pack of shelter animals to save the day. —Ace the hound, PB the potbellied pig, Merton the turtle and Chip the squirrel. Kevin Hart, Kate McKinnon, John Krasinski, Vanessa Bayer, Natasha Lyonne, Diego Luna, Thomas Middleditch, Ben Schwartz and Keanu Reeves also voice star. Jared Stern penned the script for DC League of Super-Pets and is co-directing with Sam Levine for Warner Bros. and Warner Animation Group.Johnson’s Seven Bucks Productions is also behind the project, with Johnson, Dany Garcia and Hiram Garcia producing. John Requa, Glenn Ficarra and Nicholas Stoller are executive producing. The film opens May 20, 2022. Just two months later, Johnson will be back on screens with DC’s Black Adam.
MOVIES・4 DAYS AGO
The Hollywood Reporter

Canadian actor Shamier Anderson has Halle Berry to thank for a big break — in more ways than one. Not only did Berry cast Anderson, whose credits include Syfy’s Wynonna Earp and Apple TV+’s Invasion, in her directorial debut, Bruised, she also helped set him up with a role in John Wick: Chapter 4. The latter film’s director, Chad Stahelski, served as an executive producer on Berry’s boxing film, and when Anderson, who is the brother of actor Stephan James, learned that, he asked Berry to put in a good word on his behalf because of her close ties to the franchise (she starred in 2019’s John Wick: Chapter 3 — Parabellum, which Stahelski also directed). “I got the job, and I finished filming a week ago,” Anderson enthused to THR during the Nov. 13 Bruised premiere. “I’m in John Wick with Keanu Reeves! Shout-out to Halle Berry for giving me the opportunity that led to that.” This story first appeared in the Nov. 22 issue of The Hollywood Reporter magazine. Click here to subscribe.
CELEBRITIES・3 DAYS AGO
fightsports.tv

Filming wasn’t as smooth as most movies go for Halle Berry. Halle Berry told Jimmy Kimmel on “Jimmy Kimmel Live” on Monday that during the filming of “Bruised,” which she stars in and made her directorial debut, UFC flyweight champion Valentina Shevchenko broke two of her ribs. Shevchenko stars in...
CELEBRITIES・9 DAYS AGO

Safe House, a crime thriller starring Denzel Washington and Ryan Reynolds, has found a great second life on Netflix as of late, putting up solid streaming numbers and reaching new viewers nearly a decade after its theatrical debut. This week, another one of Washington's films is making the move to Netflix, and there's a good chance it could see a similar kind of popularity with viewers thanks to the star power of Denzel.
CELEBRITIES・27 DAYS AGO
Entertainment Weekly

Halle Berry flexed filmmaking might when she went in for the kill as a first-time director on the upcoming Netflix drama Bruised (in theaters now, then streaming Nov. 24), but the Oscar-winning icon also went H.A.M. on her ace physique to step in front of the camera as a down-and-out MMA fighter for the movie. Here, the 55-year-old's longtime friend and trainer Peter Lee Thomas breaks down how he got Berry into fighting shape for the project.
CELEBRITIES・11 DAYS AGO
People

Halle Berry's Bruised character was nearly brought to life by another famous actress. The Oscar winner makes her directorial debut with the upcoming Netflix sports drama, playing Jackie Justice, a retired MMA fighter, who is convinced to return to the ring when the young son she abandoned returns to her life.
CELEBRITIES・11 DAYS AGO
Footwear News

Halle Berry celebrated the release of Netflix’s “Bruised” at the AFI Fest in Los Angeles on Sunday night. The film is special to Berry as it’s her directorial debut, but she just so happens to star in the movie, too, as a disgraced MMA fighter who finds redemption in the cage. For the occasion, the Oscar-winning actress opted for a sequined black and silver suit by Pamella Roland, featuring a cropped jacket with black satin lapels, flared slim-fit trousers and a corset with mesh inserts and draped sparkling fringe in the center. Black heels poke through the bottom of her pants for...
LOS ANGELES, CA・12 DAYS AGO

Halle Berry admits that directing “Bruised” was the hardest challenge of her career. The 55-year-old star makes her debut behind the camera in the sports drama flick, where she also plays a disgraced MMA fighter who decides to return for an unsanctioned bout and admits that she felt like it was a triumph against the odds to helm the movie.
CELEBRITIES・12 DAYS AGO
ABC7 Los Angeles

HOLLYWOOD -- Halle Berry is showing a new side of herself in the new movie, "Bruised." She plays a former MMA fighting getting back into the cage. But that's not Berry's only job in this film; she's also making her debut as a director. Berry is a big fan of...
MOVIES・9 DAYS AGO
IndieWire

The sports film, in general, is fairly formulaic irrespective of gender. It’s one of the more reliable genres, able to entertain even if the beats are standard operating procedure. When it comes to sports films featuring women, there are slight distinctions, namely in what the sport is and what role men play within it. For Halle Berry, making her directorial debut with the MMA film “Bruised,” she wanted to make the movie female-heavy, both in front of and behind the camera, and it creates pockets of distinction in which it stands out from the sports features that have come before...
MOVIES・13 DAYS AGO
POPSUGAR

Halle Berry on Training For Netflix's Bruised: "Nothing Was More Exciting Than Being in the Cage"

Halle Berry's directorial debut film Bruised is almost ready to stream on Netflix. In a press preview, POPSUGAR got to check out the film ahead of its Nov. 24 release. Along with directing Bruised, Halle Berry stars as MMA fighter Jackie Justice in the film, which takes audiences through an emotional redemption story of a disgraced MMA fighter and her demanding journey back into the octagon (the MMA's version of a boxing ring).
TV & VIDEOS・10 DAYS AGO

‘Bruised’ Review: Halle Berry Pummels Her Way Through a Mountain of Clichés

Halle Berry fought to get “Bruised” made. The movie, a labor of love (if not necessarily of originality) about an ex-Mma fighter who goes from scrubbing toilets to standing proud for her estranged young son, is all about proving oneself to the world, and so it’s fitting that Berry spent several years whipping the project into existence. Despite making history at the Oscars 20 years ago, Berry has struggled to find the kind of roles that challenge her. So she took matters into her own hands.
MOVIES・14 DAYS AGO
Radar Online.com

Halle Berry is denying she caused UFC fighter Cat Zingano harm after cutting her from her new Netflix film Bruised, claiming she wasn't that great of a fighter. According to court documents obtained by Radar, the 55-year-old actress is firing back at the lawsuit accusing her of breaching an oral agreement.
COMBAT SPORTS・9 DAYS AGO
Bossip

All eyes were on ageless stunner Halle Berry at the 2021 AFI Fest screening event for her upcoming Netflix Drama “Bruised” featuring a buzzy performance from the Oscar-winner (in her directorial debut) and the first-ever all-female Hip-Hop soundtrack. Peep the cranium-cracking trailer below:. Special guests at the star-studded affair included...
MOVIES・12 DAYS AGO
Variety

Jurnee Smollett has landed the female lead in “The Burial,” a new courtroom drama from Amazon Studios. The “Lovecraft Country” actor will star opposite Jamie Foxx and Tommy Lee Jones in the Maggie Betts-directed project. Based on a true story, the film follows a bankrupt funeral home owner who decides to sue a rival businessman over a handshake deal gone wrong. The owner hires a flamboyant attorney (Foxx) to handle the case. Smollett will play Foxx’s opposing counsel, sources said. Betts is directing from a script written by Doug Wright. Producers on the film include Bobby Shriver via his Bobby Shriver Inc....
MOVIES・9 DAYS AGO
thesource.com

Halle Berry and Cardi B hand picked each artist who appear on Bruised. Released through Warner Records the soundtrack for Halle Berry’s directorial debut film Bruised arrives on November 19. The Netflix feature that also stars Halle Berry in the lead role as a disgraced M.M.A. fighter, will have a limited run in theaters on Nov. 17 before debuting on the streaming platform on Nov. 24.
CELEBRITIES・13 DAYS AGO
ComicBook

Will Smith paid his King Richard co-stars out of his own pocket to make up for any shortfalls with the movie releasing on HBO Max. There has been a ton of chatter around the financial realities of the COVID-19 pandemic. One of the most hotly-contested debates is if stars should renegotiate their deals in light of the "decreased earning potential" In a piece from The Hollywood Reporter, they say that Smith decided to cut that conversation off at the pass. He got a reported $40 million to play Venus and Serena Williams' father and is sharing the wealth. The publication said that he personally wrote a check to Jon Bernthal, Tony Goldwyn, Saniyya Sidney, and Demi Singleton. Smith's representation has neither confirmed nor denied these reports. It wouldn't really be out of character for the star. This was clearly a passion project for one of the most beloved actors in Hollywood.
MOVIES・21 DAYS AGO
southernillinoisnow.com

A fundraiser for the Duke Ellington School of the Arts in Washington, D.C., featuring Dave Chappelle that was briefly canceled following the comedian’s controversial Netflix special The Closer, has been rescheduled for next year. The event, which was shelved after students protested Chapelle’s anti-transgender comments in the Netflix show, now will be held April 22, 2022, according to Politico.com.
CELEBRITIES・12 DAYS AGO
Awful Announcing

Actor Halle Berry has been actively promoting her upcoming film Bruised, which is also her first film as a director. Most recently, she appeared at UFC 268 to reach MMA fans. And this past weekend, she was featured on CBS Sunday Morning to talk about the movie, in which she portrays a MMA fighter making a comeback, and her acting career.
CELEBRITIES・13 DAYS AGO