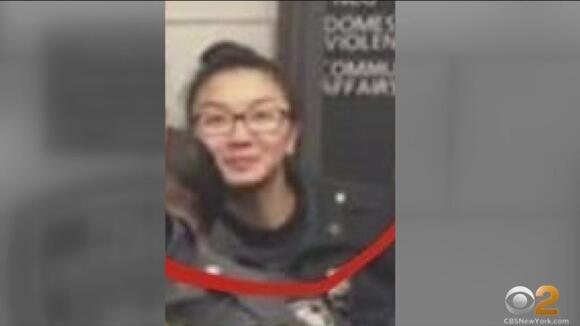 Police said 31-year-old Yvonne Wu, a five-year veteran of the force, was lying in wait at her ex-girlfriend’s home in Brooklyn when she shot her ex and the ex’s new lover , CBS2’s Jessica Moore reported Thursday.

“It was two shots and I have never ever in all the years I’ve lived here in my life seen anything like this,” neighbor Pat Santi said.

Wu was off-duty when she allegedly shot and wounded her ex-girlfriend, 23-year-old Jenny Li, and killed 24-year-old Jamie Liang, her ex’s new girlfriend, according to detectives.

Multiple 911 calls came in reporting shots fired inside a house at the corner of 19th Avenue and 79th Street in Bensonhurst , Brooklyn at around 5 p.m. Wednesday.

The deadly encounter has the community on edge.

CBS2 has leared Wu and her ex broke up last month.

“I saw them all the time together,” said Jeanette Vargas, a neighbor. “Just like anyone else, you can come home and find your lover or someone with someone else and you snap. So I don’t think it had nothing to do that she was a police officer.”

“How many breakups have you had in your lifetime? You gonna go and kill the person? You’d like to, but you don’t actually take a 9mm and shoot them,” Santi said.

Valerie Wades said she watched as paramedics tried desperately, but unsuccessfully, to save Liang.

“Ambulances with EMTs came and took the two victims out. One was, they were doing mad chest compressions,” Wades said.

Police sources told CBS2’s John Dias the deadly encounter may have been premeditated.

Sources said Wu waited inside her ex-girlfriend’s home, which they shared at one time. When she returned with Liang, Wu allegedly fired off multiple rounds.

Police said Wu admitted to the shooting right away and that her weapons was inside the house.

“I would describe her as calm and collective and very forthcoming,” said Kemper.

“Never in a million years did I think that it would’ve bee a cop who was the shooter. She just seemed so detached. Everybody else was like in hyper-drive and she was just so calm,” Wades said.

Police said Wu’s ex-girlfriend is in stable condition, but her injuries are serious.

Sources said Wu and her ex had remained in touch, but their post-relationship communication was “confrontational.”

The state Attorney General’s Office is handling the case since it is considered a police-involved shooting.

A GoFundMe has been set up to support Liang’s family with funeral expenses. To find out more, click here .

CBS2’s Jessica Moore and John Dias contributed to this report. Editor’s note: This story was first published Oct. 14 and has since been updated.

Wow😲.! OMG.!😱 Why She'd CouldJust Found Someone Else To Love 💕, Now Her Career As An NYPD IsOver And Two Young Women AreMessed Up For Life.

In the heat of the moment she snapped! She didn’t think before she react! Not worth spending the rest of her life in jail.

Father arrested in fatal shooting of his 4 young children, their grandmother in Lancaster

A man has been arrested in the fatal shooting of his four young children and their grandmother after they were found inside a Lancaster home.
LANCASTER, CA・1 DAY AGO
PIX11

See it: Bronx shootout caught on video as 2 open fire at point-blank range

MOTT HAVEN, the Bronx — Shocking video released by the NYPD shows two people walk up to each other and open fire on a Bronx street on Monday morning, officials said. Police said it happened just before 10 a.m. on St. Ann’s Avenue, near East 139th Street, in the Mott Haven section of the borough. […]
BRONX, NY・15 DAYS AGO
KGO

The wife of Joaquin "El Chapo" Guzman was sentenced to 36 months in federal prison for conspiring to distribute cocaine, meth, heroin and marijuana for import into the U.S; money-laundering and helping run the Mexican drug cartel in which her husband was the boss. Emma Coronel Aispuro will also serve...
PUBLIC SAFETY・16 HOURS AGO
Insider

Former Minneapolis police officer Kim Potter's manslaughter trial in the death of Daunte Wright begins Tuesday with jury selection. Wright's former teacher, Courtney Ross, said Potter "murdered a Black man with no thought." Ross was the girlfriend of George Floyd, a Black man who was killed during an arrest in...
MINNEAPOLIS, MN・1 DAY AGO

VOORHEES, N.J. (CBS) — A Voorhees Township man accused of beating his daughter to death with a baseball bat and critically injuring his wife has been found dead. Authorities confirm 57-year-old Gregory Kelemen’s body was found around 11:30 a.m. Tuesday in a wooded area near the 300 block of Preston Avenue. This is near the Robin Hill Apartments Police say he died from a self-inflicted gunshot wound. But police say his attack on his daughter and wife happened about a mile away at the alleged killer’s home, all of it stunning neighbors. “I couldn’t sleep at all last night,” neighbor Kara Morley said....
VOORHEES TOWNSHIP, NJ・7 DAYS AGO
The Grand Rapids Press

Police: Arrest made in 1999 killing of 13-year-old Bronx girl

A Prince William County, Virginia, man died after he was shot over Thanksgiving weekend, and his longtime girlfriend is charged in his murder. Travis Deardorff was shot and hospitalized Saturday evening in the 13500 block of Bradford Lane. Detectives learned Monday that he died. He was 49. Lisa Gaye Myers,...
PRINCE WILLIAM COUNTY, VA・13 HOURS AGO
PIX11

CROWN HEIGHTS, Brooklyn — A woman accused of shooting and killing another woman on a Crown Heights street in August was arrested on a murder charge Thursday in Brooklyn, nearly two weeks after she was apprehended by police in Florida, the NYPD said Friday. PIX11 News obtained exclusive video of law enforcement escorting Claudia Banton through JFK […]
FLORIDA STATE・12 DAYS AGO
wtae.com

2 charged with shooting inside Larimer club; FBI weighs in on how to respond to an active shooter

PITTSBURGH — Two men have been charged with risking a catastrophe after a shooting inside Club VIP in Pittsburgh's Larimer neighborhood. Watch the report in the video player above. According to court documents, hundreds of people were inside on Nov. 13 when investigators said the men started shooting and everyone...
PITTSBURGH, PA・1 DAY AGO
CBS San Francisco

SAN JOSE (CBS SF) — San Jose police officials responded on social media Tuesday night after two suspects charged with a fatal Halloween shooting in South San Jose were released from jail without having to post bail. On their Twitter page, officials did not mince words. “Our homicide detectives do an exceptional job,” the post read. “Suspects Anzures and Castillo were arrested for homicide 29. The DA filed charges on both. They are no longer in jail. The criminal justice system believes they are fine out of custody without bail.” “Yes you read that correctly, two homicide suspects, charged, out of custody,” the...
SAN JOSE, CA・6 HOURS AGO

1 man arrested for his alleged involvement in Pittsburgh club shooting; 1 still on the loose

One man has been arrested and police have a warrant out for another after a man was shot at a Club in Pittsburgh’s Larimer neighborhood. On Nov. 13, 2021, police officers responded to a shooting on the 6500 block of Hamilton Avenue in Larimer, which is the location of Club VIP.
PITTSBURGH, PA・4 DAYS AGO
PIX11

TOMPKINSVILLE, Staten Island — Police arrested a woman Monday in the death of an 80-year-old Staten Island man found with “I touch little girls” written on his body. Rene Ayarde, 28, was taken into custody on charges of murder, manslaughter and assault in the July death of Robert Raynor. Raynor was found shirtless and unresponsive. The […]
STATEN ISLAND, NY・1 DAY AGO
CBS New York

David Robinson, 53, Arrested For Murder Of Woman Who Died After Falling Down Stairs At Subway Station

NEW YORK (CBSNewYork) — Police arrested the man who allegedly killed a woman by knocking her down stairs as he tried to rob her at a subway station over the summer. David Robinson, 53, was charged in the murder of 58-year-old Than Wtwe Than, who was in a coma for almost two weeks before she died on July 28. David Robinson (Credit: NYPD Crime Stoppers) Robinson was wanted by police since the attack that ultimately killed Than at the Canal Street station on July 17. Than, a seamstress, was walking with her 22-year-old son when Robinson allegedly tried to steal her bag. Than and her son fell down the stairs during the struggle. Robinson was charged with murder and two counts of manslaughter.
PUBLIC SAFETY・3 DAYS AGO
CBS New York

NEW YORK (CBSNewYork) — Police want the public’s help finding two suspects they say assaulted a man in Harlem. The incident happened on Nov. 13 at 1:40 p.m. on Adam Clayton Powell Boulevard near 130th Street. Police say the suspects, a man and a woman, approached the 39-year-old victim, who was pushing a cart. They say the woman sprayed the victim in the face with an unknown substance, and the man hit him in the arm with a black stick. There’s no word on what, if anything, led up to the altercation. The victim refused medical attention. Anyone with any information is asked to call the NYPD’s Crime Stoppers hotline at 1-800-577-TIPS (8477), or for Spanish, 1-888-57-PISTA (74782). You can also submit a tip via their website or via DM on Twitter, @NYPDTips. All calls are kept confidential.
NEW YORK CITY, NY・17 HOURS AGO

PHILADELPHIA (CBS) — Murder charges have been filed after a 24-year-old mother was gunned down in front of her 4-year-old twins in West Philadelphia last week. Police have charged 28-year-old Donavan Crawford in the murder of his ex-girlfriend, Sykea Patton. Officers found Patton suffering from multiple gunshot wounds to the torso just after 3 p.m. on the 800 block of North Preston Street on Nov. 19. She was transported to an area hospital where she died from her injuries. Police say Patton was gunned down in front of her twin 4-year-old boys. Crawford turned himself in to the police on Monday afternoon. “She was a...
PHILADELPHIA, PA・7 DAYS AGO
Fox News

A New York City woman has been arrested in connection to the July murder of a man who was found with messages scrawled across his body, including one on his chest that read: "I touch little girls." Rene Ayarde, 28, was charged Monday with murder, manslaughter and assault in the...
NEW YORK CITY, NY・19 HOURS AGO
CBS Detroit

MINNEAPOLIS (AP) — When a suburban Minneapolis police officer shot and killed Daunte Wright in April, her reaction on body-camera video seemed to instantly establish the key facts of the case: “I grabbed the wrong (expletive) gun,” Kim Potter said. “I’m going to go to prison.” But legal experts say a conviction for Potter, who says she […]
MINNEAPOLIS, MN・2 DAYS AGO