Liberal Justice Sonia Sotomayor said that the Supreme Court had implemented a new system of oral arguments because the men were talking over the women too much.

During virtual oral arguments of the pandemic, the high court implemented a system where justices were each given a turn to ask questions in order of seniority. Before that, justices asked questions in a free-for-all.

Now, justices will keep speaking freely during arguments but after each lawyer's time has expired, they will take turns asking questions.

'Most of the time women say things and they are not heard in the same way as men who might say the identical thing,' Sotomayor said during a talk with the New York University school of law on diversity and inclusion.

Sotomayor said the data had 'enormous impact' and caused Chief Justice John Roberts to be 'much more sensitive.'

Sotomayor, who has served on the court since 2009, said that she'd notice the frequent male interruptions 'without question.' Her solution then: 'I interrupt back.'

But women aren't the only ones to benefit from the format change. Clarence Thomas, the most senior justice on the bench, was known to go years without asking questions during oral arguments. But he asked questions in every single argument in the last term and has continued to do so this term.

Sotomayor's comments came as Justice Elena Kagan clashed with her conservative colleague Brett Kavanaugh during a Supreme Court hearing over the Boston Bomber on Wednesday as they heard arguments about whether an appeals court was justified in overturning Dzhokhar Tsarnaev's death sentence.

It was a rare breach of protocol as liberal and conservative wings clashed over the punishment for Tsarnaev's role in the 2013 attack that killed three people.

The court's conservative majority appeared sympathetic toward the Justice Department's challenge to a 2020 lower court ruling that upheld his conviction but overturned his death sentence.

The three liberal justices asked tough questions but it appeared unlikely that enough of their six conservative colleagues would join them to secure a new trial to determine whether he should get a sentence of life in prison or death. 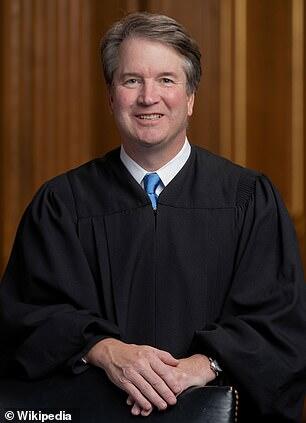 Justices Sonia Sotomayor and Kagan quizzed government lawyer Eric Feigin about why the defense was not allowed to include evidence that Tsarnaev's brother Tamerlan may have been involved in a triple homicide two years before the bombing.

The evidence would have supported Tsarnaev's defense that he was led on by his domineering older brother.

Kagan asked Feigin to assume the evidence for the triple homicide was strong and to consider what the district court would have done under those circumstances.

'Your entire case rests on the notion that the evidence just wasn't strong enough," she said. 'How is it the job of the district court to evaluate, much less decide that question?'

But Kavanaugh took issue with that line during his questioning, suggesting the liberal justices had it wrong. The reason the evidence was omitted, he said, was that it was weak so it made no sense to ask the government attorney to make assumptions to the contrary.

He continued: 'The premise was assumed away...'

'The premise was assumed away because that was the role of the jury,' interrupted Kagan.

It was a rare moment of discord. Justices frequently disagree with each other, but they almost avoid any hint that they are criticizing each other

Chief Justice John Roberts was the only one of the court's conservatives who indicated he potentially could side with Tsarnaev - who is 28 but was 19 at the time of the attack - on the triple homicide issue.

Roberts said it should be easier to admit evidence during a proceeding that would determine whether someone is sentenced to death than for other reasons.

There was little discussion of that issue during Wednesday's argument.

Tsarnaev's lawyers have said O'Toole's decisions deprived him of his constitutional right to a fair trial and violated a U.S. statute that outlines the procedure for imposing the death penalty under federal law.

Asked by conservative Justice Amy Coney Barrett what the government's 'end game' was regarding Tsarnaev's execution in light of the current federal moratorium on executione, Feigin said the Biden administration believed the jury reached a 'sound verdict and that the court of appeals was wrong to upset that verdict.'

Tamerlan Tsarnaev died after a gunfight with police.

Jurors convicted Dzhokhar Tsarnaev on all 30 counts he faced and determined he deserved execution for a bomb he planted that killed Martin Richard, 8, and Chinese exchange student Lingzi Lu, 23. Restaurant manager Krystle Campbell, 29, was killed by the second bomb.

Could it be that she is interrupted twice as much because she's a Leftist judge and her opinions are very often wrong?

What the Supreme Court justices have said about abortion and Roe v. Wade

Warning: This graphic requires JavaScript. Please enable JavaScript for the best experience. The Supreme Court on Dec. 1 will consider the most serious challenge in decades to its 1973 decision in Roe v. Wade that there is a constitutional right to abortion, and a 1992 reaffirmation of the right in Planned Parenthood v. Casey.
CONGRESS & COURTS・3 DAYS AGO
Fox News

Just minutes after it became clear that the Supreme Court was not issuing an opinion on Texas' abortion law Monday morning – when many thought it might – Democrats attacked the justices for failing to take action in the case, calling once again for the court to be packed. "The...
TEXAS STATE・5 DAYS AGO
Washington Monthly

How the Trump Era Changed the Supreme Court

On Monday, June 21, 2021, the Supreme Court sided with the government in a decision to reject criminal defendants’ due process arguments, in a dispute over appellate review when it comes to felon-possession cases. The ruling was almost unanimous. The Court decided to reject defendants’ attempts to automatically overturn their...
CONGRESS & COURTS・10 DAYS AGO

MyPillow CEO Mike Lindell on Tuesday released a copy of his long-promised Supreme Court complaint to overturn the 2020 presidential election, though it had not actually been filed and it listed the plaintiff as “[insert your state].”. The pillow magnate turned conspiracy theorist has vowed again and again that he...
CONGRESS & COURTS・3 DAYS AGO
Daily Standard

CELINA - Ohio Supreme Court Justice Pat DeWine shared his judicial philosophy with Celina Rotarians this week, saying justices should act like umpires calling balls and strikes within the rules of an existing system, not make law. DeWine, a Republican and one of seven Ohio Supreme Court justices, detailed how...
OHIO STATE・1 DAY AGO
USA TODAY

"The point of a treaty, I would have thought, would have been to freeze in time certain rights," Gorsuch said during an oral argument in 2018.
CONGRESS & COURTS・3 DAYS AGO
expressnews.com

The wait for a Supreme Court ruling over the Texas abortion ban continued Monday after the justices did not include the case in a much-anticipated release of new opinions. The snub dashed expectations from legal experts who thought the court would try to weigh in on the contentious new law before Dec. 1, when it hears a Mississippi case that directly challenges longstanding abortion rights protections.
TEXAS STATE・5 DAYS AGO

MEXICO CITY (Reuters) – The Mexican Supreme Court on Tuesday declared unconstitutional a bid by the country’s ruling party to extend the period in office of the tribunal’s chief justice, which President Andres Manuel Lopez Obrador had supported. A decision by Congress in April to prolong by two years the...
CONGRESS & COURTS・10 DAYS AGO
WashingtonExaminer

Following the jury's acquittal of Kyle Rittenhouse, the teenager who beat felony homicide charges over the deaths of two protesters in Kenosha, Wisconsin, legal analysts contend any follow-up civil rights case "will fail" if prosecutors push for one.
PUBLIC SAFETY・6 HOURS AGO
Newsweek

'Tyrants and Traitors Need to Be Executed,' Said the Army-Vet-Conspiracy-Theorist

In this daily series, Newsweek explores the steps that led to the January 6 Capitol Riot. On November 27, San Clemente, California, yoga practitioner, wellness and New Age leader Alan Hostetter, 56, who would later be indicted for his role in the riot at the U.S. Capitol, posted a video of himself on his own American Phoenix Project YouTube channel talking about his attendance at the November 14 "Million MAGA" March in Washington.
LA HABRA, CA・8 HOURS AGO
The Guardian

‘A core threat to our democracy’: threat of political violence growing across US

Laurel Wise has always considered herself a political independent, though she usually backed Democratic candidates. But this year, with Glenn Youngkin on the ballot, she was ready to try something new. “It was an end-of-the-campaign switch that I made,” Wise said. “I never thought I’d vote for Youngkin, and then...
VIRGINIA STATE・1 DAY AGO
fox40jackson.com

President Biden said the guilty verdicts in the Ahmaud Arbery case “reflect our justice system doing its job,” striking a far different tone than the somber message he issued after the acquittal of Kyle Rittenhouse days earlier. “Nothing can bring Mr. Arbery back to his family and to his community,...
U.S. POLITICS・2 DAYS AGO
Daily Montanan

A Yellowstone County District judge has rebuffed Secretary of State Christi Jacobsen’s attempt to dismiss a lawsuit brought by the Montana Democratic Party challenging the Legislature’s changes to voting laws this session. Attorneys for Jacobsen argued that the Democrats’ suit should be dismissed for a multitude of reasons, including the newly passed laws didn’t disenfranchise […] The post Judge rejects Secretary of State’s voting laws arguments, allows Dems’ case to proceed appeared first on Daily Montanan.
ELECTIONS・17 HOURS AGO
Shine My Crown

BLM Co-Founder on Kyle Rittenhouse’s Claims He Supports the Movement: ‘We See Him on Social Media Throwing Up White Supremacist Signs’

Kyle Rittenhouse was acquitted last week on charges that he murdered two white men and wounded another at the Kenosha, Wisconsin protests last summer. Since his acquittal, Rittenhouse has already visited former President Donald Trump, who gave him a glowing review, Fox News and several other right-wing outlets and figureheads.
KENOSHA, WI・2 DAYS AGO
Business Insider

Lauren Boebert ripped for 'hateful and dangerous' Islamophobic story about Ilhan Omar: 'Well, she doesn't have a backpack. We should be fine'

"This whole story is made up. Sad she thinks bigotry gets her clout," Omar said, also calling Boebert a "buffoon."
CONGRESS & COURTS・1 DAY AGO
CNBC

WASHINGTON — Nearly 100 House Democrats are pushing the Senate to expand immigration protections in President Joe Biden’s massive social spending and climate bill, and advocates say that it may be a last opportunity for years to advance any reform. The letter to Senate Majority Leader Chuck Schumer of New York and the chairman of the […] The post Immigration protections in Biden’s social policy bill face a new test in the Senate appeared first on Ohio Capital Journal.
FOREIGN POLICY・1 DAY AGO