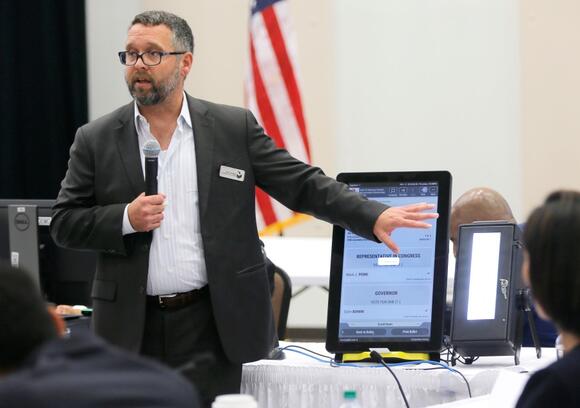 DENVER (AP) — Attorneys for President Donald Trump’s re-election campaign, its onetime attorney Rudy Giuliani and conservative media figures asked a judge Wednesday to dismiss a defamation lawsuit by a former employee of Dominion Voting Systems who argues he lost his job after being named in false charges as trying to rig the 2020 election.

Eric Coomer, a former security director at Colorado-based Dominion, says in the lawsuit he was driven into hiding by death threats after the Trump campaign and others publicized an unverified report that Coomer told activists of the Antifa movement in a pre-election telephone call that the vote could be fixed for Joe Biden.

Despite repeated claims and lawsuits, there has been no evidence that the 2020 election was rigged or of widespread fraud.

The case centers around reporting the alleged September 2020 phone call by Oltmann.

His attorney said that Oltmann identified someone referred to as “Eric” on the purported call as Coomer by Googling the name and Dominion. Oltmann also found private anti-Trump social media posts by Coomer, said attorney Andrew DeFranco.

Oltmann publicized his findings on a podcast, and he was both interviewed about it and it was picked up by the other defendants, the lawsuit alleges. Both President Trump and his son Eric Trump tweeted references to the report as the campaign launched ultimately unsuccessful lawsuits after the election alleging there was widespread voter fraud.

Giuliani and Powell both referred to Coomer in a post-election news conference alleging fraud.

Defranco, Giuliani attorney Joe Sibley, and Trump campaign attorney Eric Holway argued their clients didn’t act with malice, that the report was public knowledge, and that Coomer was a public figure — all conditions that should preclude Coomer from prevailing in his defamation suit.

Judge Marie Avery Moses repeatedly asked defense counsel if their clients investigated or tried to fact-check Oltmann’s claim. Counsel replied that their clients had a First Amendment right to address a report already in the public realm. Some insisted that there was no coordination or conspiracy against Coomer or Dominion, as Coomer’s lawsuit contends.

“There were serious doubts about election fraud at the time. The context is important,” Holway said.

Dominion, which provided vote-counting equipment to several states, has denied accusations that it switched Trump votes in Biden’s favor.

Coomer has insisted he has no connections to Antifa, was never on any call, and that there is a recording of him is “wholly fabricated.”

He also has said that right-wing websites posted his photo, home address, and details about his family. Death threats began almost immediately.

Coomer’s attorneys said they will present evidence of a pre-conceived narrative of election fraud looking for a target and that the defendants found one in Coomer. The hearing to dismiss his lawsuit continues Thursday.

NEW YORK — Federal appeals judges asked Friday whether a U.S. president’s every remark is part of the job as they weighed whether former President Donald Trump can be held liable in a defamation case that concerns his response to a rape allegation. Trump and the Justice Department say he...
NEW YORK CITY, NY・1 DAY AGO
Business Insider

John Eastman is the second witness who has invoked or plans to invoke the Fifth Amendment in response to a January 6 committee subpoena.
PRESIDENTIAL ELECTION・1 DAY AGO

The lawsuit says The Gateway Pundit engaged in a "campaign of lies" that led to the women receiving death threats and racist attacks.
GEORGIA STATE・2 DAYS AGO
Business Insider

Jena Griswold told The Washington Post that there was a concerted campaign to place Trump allies in roles overseeing elections.
COLORADO STATE・4 DAYS AGO
Newsweek

To date, Trump has made at least four assertions of executive privilege since leaving office in an attempt to block the release of sensitive information.
CONGRESS & COURTS・4 DAYS AGO

Former President Donald Trump tore into President Joe Biden in a wide-ranging interview Thursday, suggesting that the administration is "knowingly" destroying the country and is distrusted by the American people. During an appearance on "Fox & Friends," Trump shot back at the president over his 2020 comments, where he suggested...
PRESIDENTIAL ELECTION・2 DAYS AGO
Newsweek

In this daily series, Newsweek explores the steps that led to the January 6 Capitol Riot. On December 1, the dam finally broke. Attorney General William Barr invited Associated Press reporter Mike Balsamo to lunch, telling him on the record that he was breaking with President Donald Trump. "Disputing President...
PRESIDENTIAL ELECTION・4 DAYS AGO
Washington Post

As the Jan. 6 select committee investigation gathers momentum, Donald Trump has gotten several cronies to refuse to testify by invoking “executive privilege.” That’s absurd on its face: Much of the information Trump wants to keep buried doesn’t relate to the office of the presidency, but rather to his incitement of mob violence to remain president illegitimately.
POTUS・4 DAYS AGO
Washington Post

Donald Trump has a new plan to get back on television. In a statement released Sunday night, the former president offered both an admission and a proposition. The admission was that the violence that erupted at the Capitol on Jan. 6 was spurred by “the Fake Election results” — which is to say by Trump’s dishonest and unsupported allegations about the 2020 election. The proposition is that some gullible television network somewhere enjoy the “ratings bonanza” of a “public debate” on the “facts, not the fiction” of what happened in the 2020 election.
PRESIDENTIAL ELECTION・5 DAYS AGO

Democrats Want Trump To Run in 2024

President Joe Biden (D) has made waves this week after confirming he will seek re-election in 2024, but what about former President Donald Trump (R)? A concerning number of Democrats now want to see Trump run in 2024. Amid sinking poll numbers, some south of 40%, and his recent 79th...
PRESIDENTIAL ELECTION・11 DAYS AGO
POLITICO

The House could vote on whether to charge Jeffrey Clark with criminal contempt as soon as Thursday.
CONGRESS & COURTS・3 DAYS AGO
The Guardian

Bill to fund government through mid-February wins Senate report while US adds 210,000 jobs in November
PUBLIC HEALTH・1 DAY AGO

An earlier version of this article misidentified Rep. Bennie G. Thompson as Bernie. The article has been corrected. It’s rare when lawyers — as opposed to their clients — take the Fifth Amendment. But Jeffrey Clark, the former Justice Department lawyer who reportedly tried to help Donald Trump overturn the 2020 presidential election, is now claiming the privilege against self-incrimination to avoid testifying before the House committee investigating the Jan. 6 attack on the Capitol. He has just been joined in that posture by one of Trump’s main outside legal advisers, John Eastman.
POTUS・1 DAY AGO
The Independent

Asked about a shocking new claim that Donald Trump tested positive for Covid-19 before a presidential debate in 2020, Joe Biden had a blunt response.“I don’t think about the former president,” he told a press conference on Wednesday – before calmly turning and walking away.Mr Biden was being asked about a story from an upcoming book by Mark Meadows, Donald Trump’s last presidential chief of staff. In The Chief’s Chief, Mr Meadows recounts that the ex-president – known as “the former guy” in the Biden White House – was departing for a Pennsylvania rally three days before the debate...
PRESIDENTIAL ELECTION・2 DAYS AGO
Newsweek

Changing the defendant in E. Jean Carroll's defamation suit against Trump could cause the lawsuit to be dropped on technicalities.
NEW YORK CITY, NY・1 DAY AGO
Newsweek

Trump called it "not true" that Melania is enjoying private life and isn't interested in returning to Washington, D.C.,
PRESIDENTIAL ELECTION・2 DAYS AGO