Name Announced For Merger Of Cal U, Clarion And Edinboro 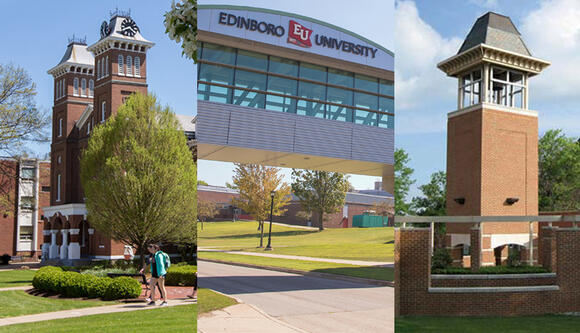 The name, also known as PennWest for short, was announced Thursday. Students and employees at the three universities are now invited to help pick a design.

“We need a name that will be clear, distinctive and easy to remember, especially for prospective students and their families,” Dr. Dale-Elizabeth Pehrsson said in a news release. “We market-tested several options, and PennWest was the name that really stood out.”

In July, the Pennsylvania Board of Governors unanimously voted to integrate six institutions into two universities , the other made up of three schools on the eastern side of the state.

The Pennsylvania State System of Higher Education (PASSHE), which oversees these universities, said each school will keep its current name and identity while expanding academic opportunities for students. This essentially means, for example, a student at Cal U could take an online class offered at Clarion. While each campus will go by its original name, they will act as one.

PASSHE says both universities will be accredited with a single president, single leadership team and a single faculty cohort and athletics will remain on each individual campus.

Also on Thursday, the Board of Governors voted to request $550 million in state funding next fiscal year, which is $73 million more than last year’s general operating appropriation.

Cal U, Edinboro and Clarion will combine effective July 2022. The school’s colors will be dark navy blue, red and gold.

Edinboro University is accepting nominations for an individual whose contributions to society reflect the spirit, philosophy and teachings of Dr. Martin Luther King, Jr. Additionally, Edinboro seeks nominations for an individual who strongly believes in equality and social justice – in remembrance of the late Edinboro professor Dr. Joseph Laythe.
EDINBORO, PA・14 DAYS AGO
CBS Pittsburgh

North Allegheny, Mt. Lebanon Among Highest-Ranked Schools In The Area

By: KDKA-TV News Staff PITTSBURGH (KDKA) – A child getting a good education is one of the most important things in the world. With 2022 right around the corner, Niche has released its rankings of the best school districts in the Pittsburgh area. Niche ranks schools based on analysis of key statistics including test scores, college readiness, SAT/ACT scores, and reviews from students and parents. North Allegheny took the top spot in the Pittsburgh area, with Mt. Lebanon and Fox Chapel being ranked two and three, respectively. You can see the full list on Niche’s website at this link.
PITTSBURGH, PA・4 DAYS AGO
WashingtonExaminer

A Massachusetts high school principal has promised racially segregated spaces for students and staff to “process” a Wisconsin jury’s not guilty verdict in the Kyle Rittenhouse case.
MASSACHUSETTS STATE・3 DAYS AGO
The 74

Marguerite Roza, director of the Edunomics Lab at Georgetown University, delves into a conversation in Education Next concerning how school leaders can most effectively use COVID-19 relief funds to accelerate learning, give students needed support, and position schools for success as the pandemic wanes.  Roza touches on promising ways she’s seeing the money being spent, […]
UTAH STATE・1 DAY AGO

Quality Journalism for Critical Times A scholarship program originally intended to help students who are victims of bullying or other types of harassment could extend to students who haven’t faced any bullying at all. What’s going on? The Florida Legislature is considering legislation to expand a voucher program called the Hope Scholarship, which could potentially allow more students into the […] The post A voucher program to curb bullying in FL schools could expand — but it may not be about bullying appeared first on Florida Phoenix.
FLORIDA STATE・2 DAYS AGO
CBS Pittsburgh

GEORGETOWN, De- Two resource groups for the Latino community in Delaware, La Esperanza and La Colectiva, are joining together to increase the scope of services and streamline delivery and funding for programs to help the Latino community in Delaware. “This initiative is really designed to promote collaboration to find opportunities...
ECONOMY・13 DAYS AGO
edinboroonline.com

HARRISBURG (Nov. 19, 2021) The Commonwealth Financing Authority (CFA) approved a $14,274 award for the Edinboro American Legion Pool in Erie County today, to replace a failing heater that enables people to use the pool even on cooler days in the early and late summer. Each year, the Edinboro American...
EDINBORO, PA・13 DAYS AGO

Some parents are silently voicing opposition to a potential mandate requiring children to receive the COVID-19 vaccination. Operation Shoe Drop, promoted by an anti-vaccine group called NJ For Medical Freedom, is encouraging parents to leave pairs of shoes at schools. The shoed eventually will be donated to Habitat for Humanity in Newark, according to Shoe Drop spokeswoman Edie Nico.
FREEDOM, CA・1 DAY AGO
edinboro.edu

Edinboro University had a big night Nov. 18 at the 7th annual Niagara Awards – yearly competition held by the Northwestern Pennsylvania Chapter of the Public Relations Society of America at the Brewerie at Union Station in Erie. The University’s Center for Branding and Strategic Communication captured seven awards, while...
EDINBORO, PA・10 DAYS AGO
CBS Pittsburgh

By: KDKA-TV News Staff PITTSBURGH (KDKA) — The Allegheny County Health Department is hosting a vaccination clinic next week. On Dec. 10, the department is holding a COVID-19 and flu vaccination clinic at Imani Christian Academy from 9 a.m. to 1 p.m. You must pre-register online if you are getting the COVID-19 vaccine. No pre-registration is required for boosters or a flu shot. Click here for more. There will also be a mobile testing site at Imani Christian Academy on Dec. 7 from 9 a.m. to noon. Walk-ins are welcomed, but you can pre-register here.
ALLEGHENY COUNTY, PA・1 DAY AGO
CBS Pittsburgh

By: KDKA-TV News Staff PITTSBURGH (KDKA) – Some unvaccinated Allegheny County employees have been fired for failing to comply with the vaccine mandate. County employees had until midnight Wednesday to prove their vaccination status or face possible termination. Over 94% of employees have given paperwork showing they’re vaccinated, and the county said that number is expected to increase in the next few days. The rest are either unvaccinated or are working through the accommodation and exemption request process. Employees who don’t have any pending requests with human resources have been fired, the county said. The county wasn’t able to say how many people were terminated because workers are still being notified. Since it’s both a personnel and legal matter, the county said information released publicly will be limited, but more will come when it’s available.
ALLEGHENY COUNTY, PA・11 HOURS AGO

PITTSBURGH (KDKA) — There’s a shortage of home health aides in our area, leaving local families desperate for care. The lack of caregivers gives parents of disabled children little to no options, and it’s putting senior citizens on long waitlists. KDKA investigator Meghan Schiller introduces us to one local family in the thick of the home health care crisis. It’s all about routine for 22-year-old Matthew Kolat. After he hangs up his shirt, he carefully removes his shoes and darts off to the basement. He’s autistic, non-verbal and needs round-the-clock supervision from his mother, Maria. “He’s with me over 100 some hours...
HEALTH SERVICES・3 DAYS AGO
CBS Pittsburgh

Dr. Oz’s Entry Into Senate Race Not Deterring Other Republicans From Running

PITTSBURGH (KDKA) — When local candidate Sean Parnell dropped out of the race for U.S. Senate last week, it seemed to open the field to many other candidates. One of those candidates was Dr. Mehmet Oz, who announced on Tuesday. When Republican U.S. Sen. Pat Toomey announced he was retiring at the end of next year, Republican insiders knew the battle to replace him would be long, contentious and expensive. What was not predicted was how many newcomers to politics and, frankly, recent residents of other states would seek to represent Pennsylvania. There’s already been lots of talk about Oz, who was born in...
PITTSBURGH, PA・4 HOURS AGO
CBS Pittsburgh

Pennsylvania Lawmakers Will See A Bump In Pay Starting Today

By: KDKA-TV News Staff HARRISBURG (KDKA) – Pennsylvania has one of the highest-paid state legislatures in the United States and beginning today, they will get a bump in pay. Their automatic pay raise kicks in, boosting their pay to over $95,000/year. Some of those lawmakers earn well over six figures, depending on the position they hold in the statehouse or senate. The pay raise doesn’t require a vote because of a 1995 law that bases their raises on inflation. Pennsylvania ranks third on the list of highest-paid legislatures in the country. California is number one, followed by New York, and then Pennsylvania, not counting per diem. Meanwhile, New Hampshire legislators earn just $100 per year and New Mexico does not pay its legislators a salary, just per diem.
PENNSYLVANIA STATE・1 DAY AGO
6abc Action News

The high court said its decision was not the last word and may be reconsidered after it hears oral argument in the case next week.
PENNSYLVANIA STATE・2 DAYS AGO
umn.edu

U of M announces Quinn Gaalswyk as its new chief auditor

Following public interviews with three finalists earlier today, the University of Minnesota Board of Regents selected Quinn Gaalswyk to be the University’s next chief auditor. This hire comes following a national search by the Board after the University’s long-time chief auditor, Gail Klatt, retired in Fall 2021. “As a Board,...
COLLEGES・2 DAYS AGO
CBS Pittsburgh

By: KDKA-TV News Staff PITTSBURGH (KDKA) – Duolingo was Pittsburgh’s first Venture Capital-backed startup to be worth a billion dollars. Now the company is expanding its footprint in the city. It’ll move into the Liberty East development on the site of the former Penn Plaza housing complex. The deal will double the company’s office space in East Liberty. It’s currently headquartered just a couple blocks down Penn Avenue. Duolingo will move into the new offices in May.
PITTSBURGH, PA・2 DAYS AGO
CBS Baltimore

BALTIMORE (WJZ) — Maryland students will continue to wear masks for the time being in public schools. The current mask mandate is set to expire Feb. 25, but the Maryland State Board of Education wants school officials to give local school systems so-called “off-ramps,” or metrics to meet, to lift those mandates. “No single school should have to close down because of COVID, quarantines should be minimized,” said Superintendent Mohammed Choudhury. “It’s time to think about off-ramps.” He said the top priority should remain keeping kids in school, but it’s time to consider ways the mask mandate can be lifted. “We can’t mask our...
MARYLAND STATE・1 DAY AGO
CBS Pittsburgh

By: KDKA-TV News Staff PITTSBURGH (KDKA) – All Pittsburgh Public schools will be in a modified lockdown Friday because of threats on social media. It’s only a half day for students, but the district said students will have to stay inside, only visitors with appointments can enter and all athletics are canceled. The lockdown is in response to threats of possible violence against schools on social media, the district said. School police are working with law enforcement to figure out where the threats came from and the district said the lockdown was added just as a precautionary measure. The FBI is currently investigating a slew of threats Tuesday against at least a dozen districts in Allegheny County.
PITTSBURGH, PA・4 HOURS AGO