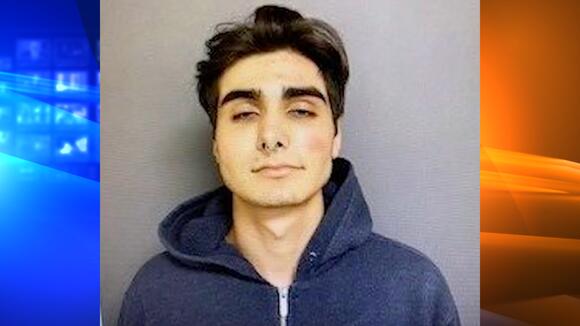 An Irvine man was charged with murder for a fatal DUI crash that took place just hours after he was released from a hospital following a fentanyl overdose, officials said Thursday.

Luis Marcial Diaz, 21, faces one felony count of murder for the death of 61-year-old Kyu Chen, of Irvine, who was on her way to work just after 4 a.m. Sept. 27 when Diaz crashed into her vehicle, the Orange County District Attorney’s Office said.

That day, Diaz ran a red light at the intersection of Sand Canyon Road and Irvine Center Drive as Chen was driving through the intersection, resulting in a crash that killed the woman, according to the DA’s office.

“She was just driving to work and now she is dead,” O.C. District Attorney Todd Spitzer said in a statement. “And the tragedy of it all, is she didn’t have to die.”

“This is a tragedy that should have never happened,” Spitzer said. “Just hours before Mrs. Chen was murdered, doctors managed to save the defendant from overdosing on drugs. Instead of taking that near-death experience to heart, he continued to engage in incredibly dangerous behavior and it cost Mrs. Chen her life.

The man is suspected of taking additional drugs after being released from the hospital, according a spokeswoman from the District Attorney’s Office.

Diaz now faces a maximum sentence of 15 years to life in prison if convicted in the fatal Irvine crash.

“Mr. Diaz showed a complete lack of regard for the lives of others when he chose to get behind the wheel that Monday morning,” Irvine Police Chief Michael Kent said in a statement. “Our hearts go out to Mrs. Chen’s family and we hope they get the justice they deserve for this tragic loss.”

Diaz, who was being held on $1 million bail, is scheduled to be arraigned later Thursday.

A maximum of only 15 years?! He should be put to death! Eye for an eye, especially with his blatant disregard for others!

People like these don't deserve second chances. He was already dancing with the devil and lost. Life in prison or death sounds fitting.

A woman is dead after her son allegedly stabbed to her death in their shared home, the Long Beach Police Department announced Tuesday. The woman, who has not been identified but is believed to be in her 50s, was stabbed “multiple times in the upper body during an argument” with her son, at their apartment […]
LONG BEACH, CA・5 HOURS AGO
KTLA

Man said to be brandishing knife, acting erratic is fatally shot by officer in Huntington Park

An investigation is underway after a man who police said was armed with a knife was fatally shot by an officer in Huntington Park overnight. The incident began with firefighters responding to a call in the 6500 block of Marbrissa Avenue at about 11:45 p.m. Monday, the Los Angeles County Sheriff’s Department stated in a […]
HUNTINGTON PARK, CA・14 HOURS AGO
KTLA

A former civilian investigator with the Westminster Police Department is facing 15 felony charges after allegedly lying on her timesheet and claiming to have worked hundreds of hours that she didn’t, officials announced Tuesday. Nadia Arlett Alvarez Poblete, 26, of Huntington Beach, has been charged with one felony count of grand theft by an employee […]
WESTMINSTER, CA・10 HOURS AGO
KTLA

A transient was charged Tuesday in the killing of a 70-year-old woman at a downtown Los Angeles bus stop last week. Kerry Bell, 48, was charged with one count of murder for the Jan. 13 attack that left Sandra Shells with a fractured skull and ultimately led to her death, the L.A. County District Attorney’s […]
LOS ANGELES, CA・8 HOURS AGO

A 44-year-old man accused of punching two medical assistants at a COVID-19 vaccination clinic in Tustin and later groping a nurse who was providing him medical care has been charged with misdemeanor battery and resisting arrest. On Dec. 30, Thomas Apollo of Poway was asked to leave the Families Together clinic after he refused to […]
TUSTIN, CA・7 HOURS AGO
KTLA

String of armed robberies under investigation in Southeast L.A. County

Authorities are investigating a string of armed robberies reported Monday night in Southeast Los Angeles County. The robberies involved convenience stores in Lakewood, Paramount and Bellflower — all locations within about 4 miles of each other. The first robbery happened around 9:11 p.m. in the 5800 block of Bellflower Boulevard in Lakewood, where three men […]
LAKEWOOD, CA・15 HOURS AGO
KTLA

Authorities believe a homeless man who was found dead in a Van Nuys parking structure Monday was the victim of a homicide. The victim was found about 8:40 a.m. Monday in the structure of a building along the 5700 block North Sepulveda Boulevard, according to a news release from the Los Angeles Police Department. Responding […]
LOS ANGELES, CA・9 HOURS AGO
KTLA

Police on Tuesday identified the suspect wanted in the killing of a young woman inside a Hancock Park furniture store. The alleged suspect has been identified as 31-year-old Shawn Laval Smith, according to the Los Angeles Police Department. He remains at large and should be considered armed and dangerous, police said. Smith was previously arrested […]
LOS ANGELES, CA・9 HOURS AGO

A teenager was hospitalized after he was shot in Pasadena on Tuesday afternoon, authorities said. Firefighters were working at 3:03 p.m. in the 1600 block of North Los Robles Avenue when a driver flagged them down and said the teen, who was a passenger in the car, had been shot, said Lt. Bill Grisafe, a […]
PASADENA, CA・2 HOURS AGO
KTLA

California prosecutors have filed two counts of vehicular manslaughter against the driver of a Tesla on Autopilot who ran a red light, slammed into another car and killed two people in 2019. The defendant appears to be the first person to be charged with a felony in the United States for a fatal crash involving […]
LOS ANGELES COUNTY, CA・13 HOURS AGO
KTLA

Family, LAPD appeal to teen’s killer to turn themselves in

Raw emotions were on full display as the family of Tioni Theus gathered for a vigil outside the Los Angeles Police Department’s 77th Street Station in the Florence area of South Los Angeles on Tuesday. On Jan. 8, the body of Theus, 16, was found near the Manchester off-ramp of the 110 Freeway, and the […]
LOS ANGELES, CA・1 HOUR AGO
KTLA

The three people who died after their car overturned near the 210 Freeway in Pasadena on Sunday night were all identified as teenagers, according to authorities. Andyn Bae, 17, was behind the wheel of the silver 2005 Honda, while Nicholas Torres, 17, and Eric Gullekson, 16, were passengers, California Highway Patrol officials said Monday. The […]
PASADENA, CA・1 DAY AGO

1 killed in fiery pileup on 105 Freeway in Paramount

One person was killed in a fiery, multi-vehicle crash on the 105 Freeway in Paramount on Monday morning. The collision happened shortly before 3:30 a.m. on the eastbound side of the freeway near Garfield Avenue, according to the California Highway Patrol incident log. Up to seven vehicles may have been involved in the pileup, among […]
PARAMOUNT, CA・1 DAY AGO
KTLA

Sheriff’s deputies removed dozens of animals including a dead horse from a Northern California home and are seeking an arrest warrant for a suspect, authorities said. A search warrant was served last week at the residence in Olivehurst, where deputies found 61 animals living in “deplorable conditions,” the Yuba County Sheriff’s Department said. The animals […]
YUBA COUNTY, CA・1 DAY AGO
KTLA

‘My heart is so broken’: Mother, community mourn 3 teens killed in Pasadena crash

Friends and family members gathered Monday night to remember three teenagers who were killed in a violent single-vehicle crash near the 210 Freeway in Pasadena. A makeshift memorial of flowers and candles grew at the site of the crash, where the teenagers’ mangled vehicle landed after the crash south of Foothill Boulevard. Andyn Bae, 17, […]
PASADENA, CA・13 HOURS AGO
KTLA

Arrests made in I.E. crackdown on illegal marijuana grow operations

One person is dead after they were struck by a car in Whittier Narrows Sunday evening, according to the California Highway Patrol. The collision happened shortly before 6 p.m. at Rosemead Boulevard and Durfee Avenue, according to Officer Brandt of the CHP. At least one person is dead after a suspected vehicle-versus-pedestrian collision, Brandt added. […]
WHITTIER, CA・2 DAYS AGO
KTLA

3 dead after vehicle flies off 210 Freeway in Pasadena

Three people have died after the car they were in flew off the freeway and landed on surface streets in Pasadena, according to the California Highway Patrol. The crash occurred at about 8:30 p.m. at the intersection of Michillinda Avenue and East Colorado Boulevard, said Officer Kimball of the CHP. The roads intersect near the […]
PASADENA, CA・2 DAYS AGO
KTLA

A diver who went missing in the ocean near an oil platform off the Southern California coast was found dead, authorities said. The search began Sunday morning in the area surrounding the oil processing facility known as platform Elly, about 5 miles off Huntington Beach, the U.S. Coast Guard said on Twitter. Sonar equipment on a […]
HUNTINGTON BEACH, CA・1 DAY AGO