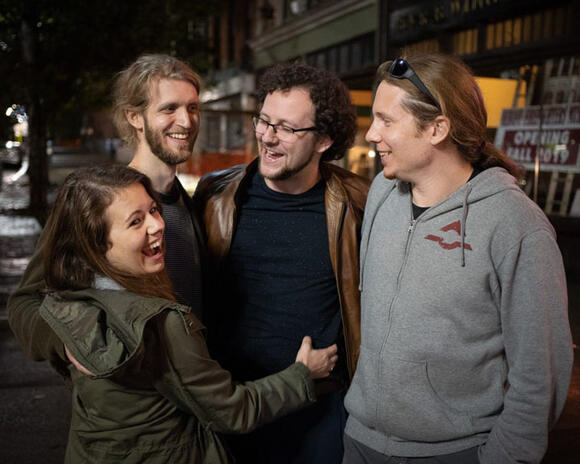 G lass Pony has an album coming out soon, but no time has been set for its release just yet. Nonetheless, the four-piece psychedelic groove circus captured scenes in Greg Pittz’s hometown of Delmar and made a trippy, lyric video for the band’s latest track, “Daydream.”

The video captures the four walking through the woods, climbing vine-choked trees and blissfully enjoying a carefree summer afternoon.

“We shot the video last year with Erik Flora, who plays in the local indie band Stellar Young,” Pittz said. ”It was filmed in Delmar off of North Street and at the Wright Lane bike park.”

Pittz said the bike park was once land that belonged to his family for generations before it was recently sold to the town.

“It was cool to shoot this in the woods that I played in as a kid. They had tons of magic back then, and still retain that vibe today,” he said.

Cool photography tricks with the camera’s focus compliments the daydream feel of the song. The video was shot, directed and subsequently edited by Flora. Eddie Hotaling engineered and mixed the audio production. The music was mastered by Ravena native Raelynn Janice, of Infrasonic Mastering in Nashville.

Glass Pony is currently touring in North Country with stops in Plattsburgh and Burlington along the way. The four are scheduled to play at Parish Public House in Albany on Saturday, Oct. 23.

Bad Mothers’ ‘Everything is Alright’

Bad Mothers dropped the first video off it’s anticipated debut album from Shooter Jennings’ Black Country Rock label. Those paying attention will recognize the track from the band’s appearance at the Palace Theatre earlier this year through Nippertown’s and The Spot 518’s March Madness inspired tournament. The video offers no frills or whistles, just the four doing what they do best musically within a dark studio with both dramatic and strobe lighting. At times, you see members of the band sharing time behind two, metallic masks that are in the shape of a skull and a wolf. In two days, it’s garnered attention with more than 18,000 views as of Sunday, Oct. 10.

Hasty Page has been one of my favorites for awhile now. The band is a product that’s two-thirds The College of Saint Rose and one-third Berklee College of Music. A talented trio destined to go far, and already has.

The band’s latest single “Wire” has been out since this summer and has received air time on local radio. Up beat with Josh Morris back on the mic – he more recently plays drums with Dark Honey and Girl Blue, among others. The video is a touching montage of clips through the years capturing the band from as far back as their high school days In Queensbury to rocking crowds at The Hollow, Jupiter Hall and more. It’s the kind of thing you’d expect to see on graduation day.

Taking over Troy with music

TROY — More Than Music LLC announced the next independent artist showcase in their More Music Less Violence series will be at the Lucas Confectionary on Sunday, Nov. 7, from 4 to 8 p.m. Bringing the positive and uplifting sound to the stage this time around are local artists including; Raina Simone, Ohzhe (A SNUG […]
TROY, NY・21 DAYS AGO
Spotlight News

Legends of Rock to roll The Egg

ALBANY — The legends of music past will come back and welcome fans to enjoy the return of “the Sixties.” A Capital District ensemble of talent assembled by Gary Weinlein’s Classic Rock Productions will recreate the nostaligic era of music on Saturday, Nov. 13, at 7:30 p.m., at the Egg’s Hart Theatre. It is the […]
ALBANY, NY・15 DAYS AGO
Spotlight News

The Last Shift: Albanys local party band is back

ALBANY — There are a few absolutes recognized here in the Capital District. Tulip Fest falls on Mother’s Day weekend. A box of Freihofer’s Chocolate Chip Cookies is to be polished off the day it’s opened. The LateShift plays The Hollow on the week of Thanksgiving. That last bit will soon be no more as […]
MUSIC・21 HOURS AGO
The Stranger

Seattle local Cody Choi is the 23-year-old behind SuperCoze, a rising melodic indie-pop project popping up and performing all around the city's creative spaces. They dropped their debut album Rainy Day Sunshine in March of 2020, right when the never-ending rainy day of the pandemic hit. A year-and-a-half later, it seems we could still use a good dose of the sunshine vitamin that is SuperCoze.
SEATTLE, WA・14 DAYS AGO

Progressive metallers Jinjer have dropped a new single and music video for the track “Disclosure.” The track comes off of their recent new album Wallflowers, out now via Napalm Records. The band ccontinues to tour in the USA this fall with Suicide Silence opening. Watch the clip now!. JINJER on...
MUSIC・11 DAYS AGO
hometownsource.com

An Edina couple with a well-watched YouTube channel recently took part in a new song meant to bring awareness to the experiences of those who live with a disability. Shane and Hannah Burcaw, who run the channel Squirmy and Grubs, were featured in the music video for the song, “SPACES,” by artist James Ian. The song debuted earlier this month, highlighting the voices of those with spinal muscular atrophy, a rare, progressive disease that affects the nervous system and muscle movement. Both Shane Burcaw and Ian have spinal muscular atrophy, or SMA.
EDINA, MN・6 DAYS AGO
mxdwn.com

Aesop Rock and Blockhead have released a cinematic new music video for their track, “Flamingo Pink.” The track was on Aesop Rock and Blockhead’s recently released project, Garbology. It was the duo’s first full length collaboration after decades of features on each other’s projects. The music video for “Flamingo Pink” was directed by Rob Shaw.
MUSIC・6 DAYS AGO
hotnewhiphop.com

On Friday, November 19th, Masego and Devin Morrison dropped off a new single, “Yamz,” along with a music video just in time for Thanksgiving. The Mac Grant directed visual leans into a playful double entendre of the song’s title, referring to both money and a tasty holiday treat. “I know...
MUSIC・6 DAYS AGO

Canadian songwriter Jadea Kelly’s new single “Driveway” is a sneak peek into her long-awaited fourth album, due out in 2022. The song’s commentary, about longing for loved ones and the comforts of home, captures Kelly’s relatability as she reminisces about the simplicity and warmth of her home back in Canada.
MUSIC・3 DAYS AGO
My Country 95.5

The Holidays are here, and I for one am 150% thrilled about it. I've been watching Hallmark Christmas movies for weeks now, but I haven't started to play Christmas tunes. My husband insists that I'm not allowed to start playing Holiday music until after Thanksgiving. Bah Humbug, am I right?
SHERIDAN, WY・3 DAYS AGO
Big Country 96.9

Can Luke Combs Lead the Top Country Music Videos of the Week?

Luke Combs topped off a banner week for his career by releasing a new video for his brand-new song, "Doin' This." Will he head up the most popular country videos of the week? That's up to Taste of Country readers. Combs took home Entertainer of the Year honors at the...
MUSIC・14 DAYS AGO
hotnewhiphop.com

Detroit's Big Sean and iconic producer Hit-Boy's run has continued deep into November. The duo first linked up for their collaborative single "What A Life" on Oct. 22, and dropped their six song EP What You Expect the next week. Today (Nov. 12), Sean and Hit-Boy dropped the EP's fourth...
CELEBRITIES・14 DAYS AGO
24hip-hop.com

Formerly known as Boyz N Da Massis, GTB Kartel has recently set the bar for new music with new singles such as “Louis V” and “Just Got A Bag” out on all streaming platforms as numbers steadily go up. Anxiously waiting on the new project coming out soon “Banopoly” GTB...
ENTERTAINMENT・11 DAYS AGO
wjle.com

New Christian Music Video to be Filmed in Smithville

Production will begin locally next month on a Christian music video based on a new song called “Cries from the Cross” about the crucifixion story. The target date for release is next spring in time for Easter. “Cries from the Cross” was recently composed as a collaborative work of local...
SMITHVILLE, TN・13 DAYS AGO
Spotlight News

Tracks of the Week: new music from Wolfmother, Blues Pills and more

If there's a theme to this week's Tracks Of The Week (there isn't) it would be bands returning when you're not expecting them too. There's Porcupine Tree, back for the first time in a decade despite many thinking they'd never work together again. There's Blues Pills, releasing an unexpected cover version of a Rolling Stones classic without any advance warning. And there's Wolfmother, who launched an entire album yesterday without bothering to tell anyone it was on the way first. Long may this sort of excitement continue.
MUSIC・12 DAYS AGO
Complex

Cozz has released the visuals to go along with his new song “Addicted,” in which the rapper waxes poetic about some of his greatest vices and the way he battles them every day. Cozz, who is signed to Dreamville along with Bas, Omen, Ari Lennox, and others, dropped his last...
CELEBRITIES・9 DAYS AGO
1029thebuzz.com

Beyond Here came out of the gate locked and loaded for 2021. Their latest single, “Feel Bad” was already one of my favorite songs of the year and now the music video they shot has solidified it. It find it ironic the song is called “Feel Bad” but it leaves me feeling quite the opposite. 2022 is the year of Beyond Here and I will die on this hill.
MUSIC・12 DAYS AGO
Vulture

Charli XCX, we want to make it very clear: You have what we want! The singer schooled us in the music video for “New Shapes,” featuring Christine and the Queens and Caroline Polachek. The video marks the first segment from Charli’s new talk show, TV Heaven. According to a press release, TV Heaven “will only be available to stream in full once you cross over to the afterlife.” Anything for more visuals from her forthcoming album, Crash. In her first performance on TV Heaven, she delivers, starting off the video by parodying sexist late-night show hosts (embodied here by Benito Skinner). “Thanks for not being bitches,” he says to introduce the “ladies.” Then Charli dances alongside Christine and Caroline in a room full of sunset colors and funky shapes. Charli released the first single from the album, “Good Ones,” back in September. Crash, her fifth record, comes out March 18, 2022. Better shape up.
CELEBRITIES・14 DAYS AGO
wbwn.com

Luke Combs debuted a brand new song on the 2021 CMA Awards Show called “Doin’ This.” The CMA Entertainer of the Year shares the story behind that new song. “Yeah, the story for ‘Doin’ This’, I wrote it with Rob Wilford and Drew Parker. We wrote it sometime during the whole COVID experience at my house. And I think it was just kind of, you know, written from a really personal place. You know, people always kind of asked me, well, what job would you have if you weren’t doin’ this? And we kind of took that idea and made it into a song and it just felt like there’s so many people that will never stop doing what we’re doing. And that’s what I would be doing if I didn’t make it this far, I would be trying to make it this far. And I think the song speaks to a lot of people in that way man, people that just are trying to make something happen and they’ve always wanted to and, and they’ll never stop trying.”
MUSIC・14 DAYS AGO