Matthew Mindler’s Cause of Death Revealed 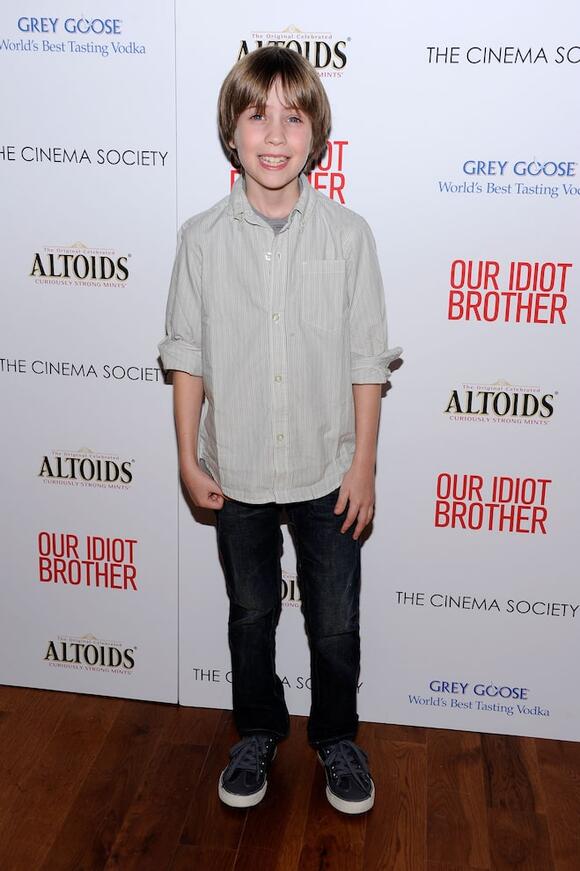 Former child star Matthew Mindler, 19, took his own life in August, and now his cause of death has been revealed.

Sodium nitrate is a common preservative used in cured meats, but the site says an overdose of the compound “causes hypotension and limits the flow of oxygen in the body, which can result in death.”

His mother Monica also spoke out to TMZ, saying she found out later that Matthew had researched sodium nitrate and suicide, and that he ordered the lethal compound online for just $15. She hopes his death will serves as a cautionary tale and helps others look for warning signs.

He was last seen stepping out of his dorm wearing black pants, a Millersville University sweatshirt, and carrying a black backpack. His body was later found near campus.

Mindler’s last acting credit was for the 2016 movie “Chad: An American Boy.” His most high-profile role was in Jesse Peretz’s “Our Idiot Brother,” starring Paul Rudd, Elizabeth Banks and Zooey Deschanel.

If you or someone you know is contemplating suicide, please call the National Suicide Prevention Lifeline at 1-800-273-TALK (8255).

I just don't understand I lost my son to suicide ...I never saw it coming I would have never believed that someone who loved life so much could do such a thing my son used carbon monoxide to end his life .....And what's bad is that he also end my life ....

All suicide deaths are tragic..to think that people feel that hopeless and sad, that they don't want to live is heartbreaking to me..I hope he is at peace now..🙏🙏💖

I feel some of the information in this article is very dangerous. I understand that some of his fans may want to know how he passed. however, I feel like some of this information could put others at risk. Letting people know not only what he used as his method is dangerous enough. Added with the information that it's easily obtained online is extremely risky.

After Brian Laundrie's remains were found in a Florida reserve, new details have come to light about his passing. On Nov. 23, the Laundrie family's attorney confirmed the 23-year-old's cause of death. "Chris and Roberta Laundrie have been informed that the cause of death was a gunshot wound to the...
PUBLIC SAFETY・14 DAYS AGO
MyStateline.com WTVO WQRF

ROCKFORD, Ill. (WTVO) — Notable fashion designer and Rockford native Virgil Abloh passed away Sunday at 41-years-old. Abloh made history in 2018 by becoming the first black artistic director of men’s wear at Louis Vuitton. He was battling an aggressive cancer of the heart known as cardiac angiosarcoma. The disease can lead to tumors that […]
ROCKFORD, IL・8 DAYS AGO
Mix 95.7FM

Brian Laundrie Family Attorney Reveals His Cause of Death

According to multiple reports, an attorney for the Laundrie family has told news outlets that Brian Laundrie died by suicide from a gunshot wound to the head. The news follows a weeks-long search for Laundrie following the disappearance and death of his ex-fiancee Gabby Petito. Back in October, the FBI...
PUBLIC SAFETY・14 DAYS AGO
K2 Radio

MIAMI (AP) — An attorney for the family of Brian Laundrie says he fatally shot himself in the head. Attorney Steve Bertolino said in a statement that Laundrie’s parents have been informed that the cause of death was a gunshot wound to the head, and the manner of death was suicide.
MIAMI, FL・14 DAYS AGO

“We’re taking it day by day”: Lisa Schaffner’s family reveals the former 8News anchor’s cause of death, shares how they #LiveLikeLisa

The sudden death of former 8News anchor and community advocate Lisa Schaffner shocked RVA and left many searching for answers. Now her family is sharing more of their story.
RICHMOND, VA・6 DAYS AGO
enstarz.com

The casting director behind longtime-running Broadway shows, Geoffrey Johnson, reportedly passed away at Henry J. Carter Hospital in New York. He was 91. It was confirmed by Variety that he died last Friday, November 26, 2021, due to respiratory failure. According to the source, Johnson has worked with Broadway for decades which made him work with legends such as Hal Prince, Andrew Lloyd Webber, David Merrick and Noël Coward.
CELEBRITIES・9 DAYS AGO
enstarz.com

The voice actor behind numerous Power Rangers animations, Scott Page-Pagter, passed away at the age of 52. It was revealed by actress and co-worker Catherine Sunderland, that he went through a battle with cancer, based on her Instagram post last December 6, 2021. "Scott was one of my first friends when I moved here. He directed me through numerous ADR sessions of power rangers and always made working such a joy."
CELEBRITIES・1 DAY AGO
uticaphoenix.net

Cause of Death Revealed for Mummified Colorado ‘Cult’ Leader Found

Amy Carlson, the leader of a New Age sect known as Love Has Won, died due to a decline brought on by alcohol abuse, anorexia, and dosing colloidal silver, according to an autopsy report from the El Paso County Coroner’s Office in Colorado. Mystery initially shrouded Carlson’s death after her...
PUBLIC SAFETY・3 DAYS AGO

Brian Laundrie's cause of death determined as self-inflicted gunshot

TAMPA, Fla. — Brian Laundrie died from a self-inflicted gunshot wound, according to family attorney Steven Bertolino in a statement and confirmed by the medical examiner. The update Tuesday comes more than a month since Laundrie's skeletal remains were found on Oct. 20 at the Myakkahatchee Creek Environmental Park in Sarasota County and later identified through a comparison of dental records. Law enforcement has not yet commented on the latest developments.
SARASOTA COUNTY, FL・14 DAYS AGO
NME

Will Smith has admitted his “heart shattered” when his son Jaden asked to be emancipated when he was a 15-year-old. The King Richard star opened up about the struggles his son faced after their 2013 film After Earth bombed commercially and critically, with Jaden enduring attacks from the media. Writing...
RELATIONSHIPS・29 DAYS AGO
country1037fm.com

One of the biggest and most successful sitcoms of the 1970s/80s was “Happy Days.” As was the case in those days, to capitalize on that success, “spinoff” shows were developed from the original. “Happy Days” spawned “Mork and Mindy” (making a star of Robin Williams) and “Laverne and Shirley.” Cindy Williams and Penny Marshall (pictured above) starred in this brilliant comedy of two, single girls in Milwaukee working at a brewery and navigating life. Cindy’s (Shirley) boyfriend on the show was a dancer/singer/boxer, “Carmine ‘The Big Ragu’ Ragusa.” He was played by Eddie Mekka.
CELEBRITIES・5 DAYS AGO
extratv

“The Real Housewives of Orange County” alum Vicki Gunvalson is opening up about her secret two-year cancer battle!. In a recent appearance on Jeff Lewis’ SiriusXM show, Gunvalson revealed, “I had cancer! I just had my whole f**king uterus taken out.”. During another interview with Celebuzz!, Vicki noted that she...
CELEBRITIES・13 DAYS AGO

Alyssa Scott is in mourning. Hours after Nick Cannon shared the tragic news that his and Scott's 5-month-old son, Zen, had died from a brain tumor over the weekend, the model took to her Instagram Story to share a video of their child in his memory. The heartbreaking clip showed...
CELEBRITIES・12 HOURS AGO
extratv

“Extra’s” Cheslie Kryst spoke with “The Bachelorette” alum Hannah Brown, who is promoting her new book “God Bless This Mess.”. During their chat, Hannah revealed why she wrote about hooking up with her ex Peter Weber while his season of “The Bachelor” was airing. She said, “The reason I decided...
CELEBRITIES・14 DAYS AGO
heatworld

Being rushed to hospital isn't exactly how anyone wants to spend their Monday evening, but that was the reality for Love Island's Maura Higgins who spent the night waiting in A&E following a gruesome accident. After what she's had to deal with this year following her split with Strictly Come...
PUBLIC SAFETY・15 HOURS AGO
extratv

Jonshel Alexander, who appeared in the Oscar-nominated film “Beasts of the Southern Wild,” was killed on Saturday in Louisiana. She was 22. Police told NOLA.com that Alexander was sitting in a vehicle with a man in New Orleans’ 7th Ward around 9 p.m., when her and the man were shot. She died at the scene. The man was able to drive himself to the hospital.
NEW ORLEANS, LA・5 DAYS AGO
Laredo Morning Times

‘Love Has Won’ Leader Amy Carlson’s Cause of Death Released

A coroners report revealed that Amy Carlson — the leader of the fringe spiritual sect Love Has Won whose mummified remains were discovered in April — had died from a combination of “alcohol abuse, anorexia, and chronic colloidal silver ingestion.”. The El Paso County Coroners Office in Colorado Springs, Colorado...
COLORADO SPRINGS, CO・4 DAYS AGO
extratv

It looks like Clare Crawley, 40, has moved on from Dale Moss and is now casually dating comedian Jeff Dye. A source tells Us Weekly, “She was set up with Jeff since they have mutual friends. Clare agreed to go on the date because she thought he was handsome.” The insider said Dye, 38, was “into” the former Bachelorette, too.
CELEBRITIES・13 DAYS AGO
TVLine

A devastated Nick Cannon announced Tuesday that he lost his infant son Zen to brain cancer over the weekend. He was five months old. Zen, born June 23, was the youngest of Cannon’s seven children. On his eponymous daytime talk show, the Masked Singer host explained that Zen had been diagnosed with a condition called hydrocephalus — which, per the Mayo Clinic, is “the buildup of fluid in the cavities deep within the brain” — before it was eventually discovered that he had a malignant tumor which required immediate surgery. A shunt was inserted in his head — “a tube that would go...
CELEBRITIES・12 HOURS AGO
Get Up Mornings with Erica Campbell

Janet Hubert, our favorite Aunt Viv from the hit show The Fresh Prince Of Bel-Air was hospitalized. Although it is unclear why she was hospitalized. The actress took to Instagram with a post and delete, with a picture of her and Smith that read the caption; “Don’t waste precious time people in anger. Yes people […]
CELEBRITIES・22 HOURS AGO