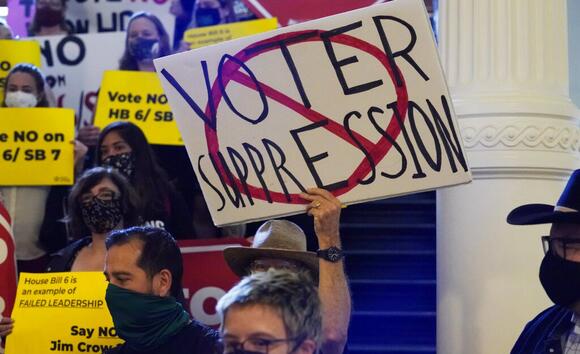 T he Senate will take up voting reform legislation next week, the top Democrat announced Thursday, but Republicans are poised to block it, despite centrist Sen. Joe Manchin's reforms.

Majority Leader Chuck Schumer told lawmakers the Senate will consider the Freedom to Vote Act, a bill that aims to expand access to the polls and to counter new red-state voter integrity laws Democrats say are too restrictive.

“We cannot allow conservative-controlled states to double down on their regressive and subversive voting bills,” Schumer wrote to fellow Democrats on Thursday. “The Freedom to Vote Act is the legislation that will right the ship of our democracy and establish common sense national standards to give fair access to our democracy to all Americans.”

Democrats need the support of at least 10 Republicans in order to advance the legislation to the floor for debate.

However, they are unlikely to get a single GOP vote.

Republicans say the measure would shift control over elections from local officials to the federal government and would decrease voter integrity while increasing the likelihood of voter fraud.

“No amount of repackaging or relabeling will let Democrats sneak through big pieces of the sweeping, partisan, federal takeover of our nation’s elections that they have wanted to pass since they took power,” McConnell said after Manchin announced the legislation in September.

The measure is a revised version of a much larger, sweeping election reform bill that all Republicans and Manchin voted against earlier this year.

Democratic leaders tasked Manchin to come up with a bill he could support, then called on him to try to find Republicans to help advance it to the floor.

Manchin’s proposal, crafted with a group of fellow Senate Democrats, would make Election Day a national holiday and would downgrade voter ID requirements to allow utility bills and other documents in place of a state-issued photo ID. The measure would allow same-day voter registration, mail-in voting, and expanded early voting, as well as new campaign funding disclosure rules.

The bill would also provide matching government funding for political campaigns paired with an end to “dark money” campaign donations.

Democrats have been eager to pass a federal voting reform measure in the wake of changes made in many red states aimed at bolstering voter integrity.

Schumer, in his letter to fellow Democrats on Thursday, held out hope that Manchin could round up the 10 GOP lawmakers needed to advance the bill next week.

“If they have ideas on how to improve the legislation, we are prepared to hear them, debate them, and if they are in line with the goals of the legislation, include them in the bill,” Schumer said Thursday. “But Republicans must come to the table to have that conversation and at the very least vote to open debate.”

McConnell, in his statement opposing the Manchin compromise bill, called the new plan “fake solutions in search of a problem,” adding, “We will not be letting Washington Democrats abuse their razor-thin majorities in both chambers to overrule state and local governments and appoint themselves a national Board of Elections on steroids.”

While Republicans are likely to block the bill, Democrats can demonstrate their entire caucus backs the measure now that Manchin is on board. Many Democrats hope they can convince Manchin and other centrist Democrats to eliminate the filibuster

A growing chorus of conservatives is demanding that Senate Republicans shut down the government if President Joe Biden refuses to scrap the federal coronavirus vaccine mandate.
CONGRESS & COURTS・19 HOURS AGO
WashingtonExaminer

Minority Leader Mitch McConnell has grown increasingly fond of the Senate’s most centrist Democrat, West Virginia’s Joe Manchin, who is about the only person capable of blocking passage of President Joe Biden’s multitrillion-dollar social welfare and green energy legislation, known as "Build Back Better."
CONGRESS & COURTS・17 HOURS AGO
Washington Examiner

President Joe Biden’s "Build Back Better" legislation is on the docket for the Senate. All eyes are on Democratic Sens. Joe Manchin and Kyrsten Sinema. However, after the sweeping wins for Republicans in Virginia and elsewhere this November, other Democrats up for reelection in 2022 should evaluate if voting for the $1.75 trillion bill is in their best interest.
CONGRESS & COURTS・3 HOURS AGO

Democrats want to raise the debt ceiling, avoid a government shutdown, and pass Biden's agenda all before Christmas. The GOP has other plans.
CONGRESS & COURTS・1 DAY AGO
NBC News

IT’S ALL THEIR FAULT: In dueling news conferences, the Democratic majority leader and Republican minority leader of the Senate each faulted the other for the failure to reach an agreement on the National Defense Authorization Act, legislation that has passed with bipartisan support for 60 years.
WASHINGTON, DC・4 HOURS AGO
Markets Insider

Democrats are gambling on a Christmas rush to pass Biden's economic agenda, keep the government from shutting down, and continue paying the country's bills to avoid economic catastrophe

"It will likely take some long nights and weekends," Chuck Schumer said, referring to major bills his party is hoping to pass before the year ends.
PRESIDENTIAL ELECTION・1 DAY AGO

The Senate majority wants to pass bills on social spending, government funding, the debt limit and Pentagon policy — all before Christmas.
CONGRESS & COURTS・1 DAY AGO
WashingtonExaminer

WASHINGTON — Nearly 100 House Democrats are pushing the Senate to expand immigration protections in President Joe Biden’s massive social spending and climate bill, and advocates say that it may be a last opportunity for years to advance any reform. The letter to Senate Majority Leader Chuck Schumer of New York and the chairman of […] The post Immigration protections in Biden’s social policy bill face a new test in the Senate appeared first on Wisconsin Examiner.
FOREIGN POLICY・2 DAYS AGO
MarketWatch

Lawmakers return to Washington this week from a holiday break, and with them will come fierce debate over President Joe Biden’s sprawling social-spending and climate bill passed by the House earlier this month, as well as a Friday deadline to keep the government running.
CONGRESS & COURTS・1 DAY AGO
Newsweek

Lawmakers returned to Washington Monday staring down a critical holiday season to-do list that juggles President Joe Biden's domestic spending priorities with keeping the government open and averting a catastrophic debt default. Senators are bracing for what is shaping up to be the one of the most grueling Decembers in years, with defense funding and the expanding probe into the January 6 insurrection on Capitol Hill likely to add to the workload. But the top priority is government funding, with federal agencies due to run out of cash on Friday. A lasting deal to avoid a damaging shutdown would require agreement on spending bills for the 2022 fiscal year, as the government is still funded at levels approved during Donald Trump's administration.
CONGRESS & COURTS・1 DAY AGO

"It will be a ratings bonanza for television," said the former president in a statement.
PRESIDENTIAL ELECTION・2 DAYS AGO
The Guardian

Two Democratic senators threatening to derail Joe Biden’s agenda have been condemned by anti-corruption watchdogs for accepting a flood of money from Republican and corporate donors. Joe Manchin and Kyrsten Sinema present the last hurdle to the US president’s social spending and climate package after it was passed by Democrats...
CONGRESS & COURTS・3 DAYS AGO
Axios

Manchin’s next blow to liberals

During his six years as governor, Sen. Joe Manchin developed a rough three-part test he's taken to Washington: Are proposed programs paid for? Do they have bipartisan support? And do they solve a specific problem facing his constituents?. Why it matters: The West Virginia Democrat wields unparalleled power in a...
CONGRESS & COURTS・5 DAYS AGO
marijuanamoment.net

U.S. senators representing Colorado are adding their voices to calls for marijuana banking reform to be included in must-pass defense legislation. In a letter sent to Senate committee leadership on Wednesday, Sens. John Hickenlooper (D-CO) and Michael Bennet (D-CO) noted that the House passed its version of the National Defense Authorization Act (NDAA) with the banking amendment, and argued that language should be adopted by negotiators in conference for the final legislation sent to President Joe Biden’s desk.
CONGRESS & COURTS・5 DAYS AGO