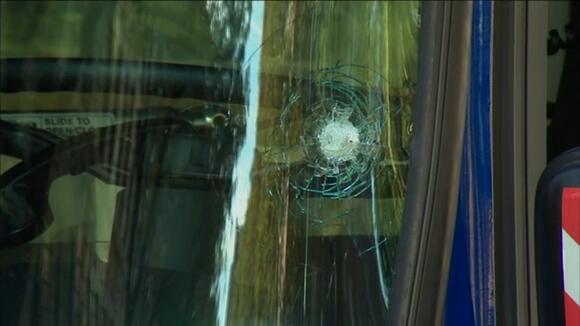 A 14-year-old boy getting onto an MTA bus in Harlem was grazed by a bullet when gunfire erupted outside the vehicle Thursday morning. The shots were fired at Lenox Avenue and West 139 Street just before 10 a.m., and police believe the teen was the intended target. He was grazed in the head as he boarded the M1 bus, ad he was treated at the scene before being rushed to NYC Health + Hospitals/Harlem. ALSO READ | What Gabby Petito's death by strangulation could mean for Brian Laundrie's case

His injuries were described as minor. Iesha Sekou, the founder and CEO of Street Corner Resources, a stop the violence non-profit, visited him in the hospital and said he is going to be OK. "This young man was really blessed, blessed to not have the bullet penetrate his skull," she said. "We weren't surprised there was a shooting. The only surprise was that it was happening so early." The 39-year-old bus operator was directly behind where the shooting took place, but he was reportedly protected by the shield placed around the driver's seat. A second round struck the windshield. "My heart goes out to the bus operator," interim NYC Transit President Craig Cipriano said. "What a traumatic experience this must have been. Out of the grace of God, we know that he did not suffer any physical injuries. My heart goes out to him." The bus operator was hospitalized for trauma and a minor injury to his left hand. The suspect fled the scene, and no arrest were immediately made. The investigation is active and ongoing, and anyone with information is asked to call the NYPD's Crime Stoppers Hotline at 1-800-577-TIPS (8477) or for Spanish, 1-888-57-PISTA (74782). LIGHTER NEWS | Name that pooch: New York Islanders adopt 3rd 'Puppy with a Purpose'

Shootings involving children and teens are up by a lot, as more than 100 non-fatal shootings involving kids under the age of 17 have happened so far this year. That's more than double the amount from 2019. "Youth violence is a high priority for the NYPD," Deputy Chief Russell Green said. "As a matter of fact, most of the members of the service behind me, we just returned from a youth violence strategy meeting held this morning at One Police Plaza." ---------- * Get Eyewitness News Delivered * More Manhattan news * Send us a news tip * Download the abc7NY app for breaking news alerts * Follow us on YouTube

Two MTA workers were honored by the transit authority on Tuesday for their actions during an emergency service delay.
MANHATTAN, NY・18 HOURS AGO
ABCNY

Verlon Thomas, 36, is accused of ordering the girl to get into his car Monday afternoon in East New York.
BROOKLYN, NY・4 HOURS AGO
ABCNY

Investigators say one of the men shot an 18-year-old store clerk in the head during a confrontation inside the M&M Grocery.
BROOKLYN, NY・11 HOURS AGO
ABCNY

Officers pulled over the BMW SUV on Cozine and Pennsylvania avenues at around 3:30 a.m. Wednesday.
BROOKLYN, NY・1 HOUR AGO

They are accused of slapping a 3-year-old boy across the face last Friday. Police say the women approached an 18-year-old girl Sunday and pulled her to the ground.
BROOKLYN, NY・11 HOURS AGO
ABCNY

The longer shifts are intended to assure adequate staffing. 73% of workers are vaccinated.
NEW YORK CITY, NY・1 DAY AGO
ABCNY

The flames started in the Dragon One restaurant before spreading to a neighboring restaurant and up through the five-story apartment building above.
UPPER EAST SIDE, NY・22 HOURS AGO

Passaic police say that they have identified Ernest Fuentes as one of the gunmen and have issued a warrant for his arrest.
PASSAIC, NJ・3 HOURS AGO
ABCNY

The victim would be 35 years old today. Her family told Eyewitness news that time has not closed the wounds and the pain of losing her has not ebbed.
BRONX, NY・17 HOURS AGO

Bradley Cooper says in 2019 he was held at knifepoint on a New York City subway.
NEW YORK CITY, NY・14 HOURS AGO
ABCNY

A video was posted on Snapchat showing the two students inside Platt High School in Meriden, north of New Haven.
CONNECTICUT STATE・4 HOURS AGO
ABCNY

After days of searching, Gary and Lorraine Parker's bodies were found by the police department's drone in a densely wooded area.
STAFFORD TOWNSHIP, NJ・18 HOURS AGO
ABCNY

Man shot in the back inside East Harlem deli

A man was shot in the back inside a deli in East Harlem on Saturday.
PUBLIC SAFETY・3 DAYS AGO
ABCNY

Police are searching for a woman captured on surveillance punching a customer in Brooklyn who asked her to put on a mask.
BROOKLYN, NY・3 DAYS AGO
ABCNY

Police in New Jersey have released a surveillance photo of the suspect wanted in connection to the murder of an 84-year-old woman inside her home.
BELLEVILLE, NJ・2 DAYS AGO