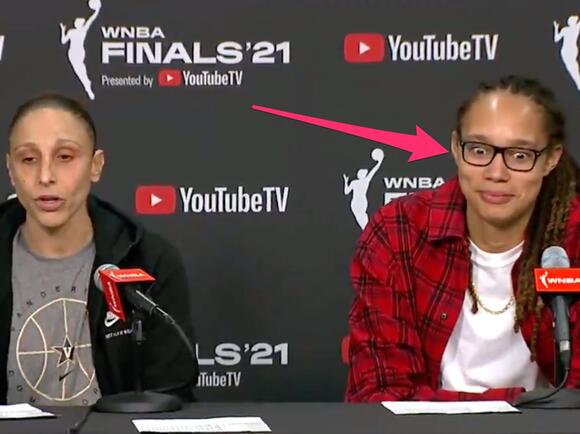 There are few greater competitors in the game than Los Angeles Lakers legend Kobe Bryant. It’s no secret that Kobe’s ruthlessness spills far beyond the basketball court and apparently, WNBA icon Diana Taurasi once fell victim to this. In a recent interview with Bleacher Report’s Taylor Rooks, Chicago Sky star...
NBA・1 DAY AGO
ESPN

Phoenix Mercury center Brittney Griner says it would mean a lot to her to have her jersey retired at Baylor despite not attending a game at the school since her falling out with former Bears women's basketball coach Kim Mulkey more than eight years ago. "I've seen that special moment...
PHOENIX, AZ・2 HOURS AGO
fadeawayworld.net

Devin Booker is one of the most talented young players in the NBA right now, having played in the 2021 Finals and leading the Phoenix Suns alongside Chris Paul in a season where nobody believed in them. He's very talented with the ball in his hands and one of the...
NBA・16 DAYS AGO
ClutchPoints

The only question that remains in terms of debating the greatest shooting duo in NBA history is who comes in second. The iconic Golden State Warriors tandem of Stephen Curry and Klay Thompson have a hold on the top spot that they may very well never relinquish. But once upon...
NBA・26 DAYS AGO

In the sports community, athletes are bonded together by their competitive spirits and a mutual respect for one another. There have been plenty of occasions in which the biggest names in sports have shown each other love. Of course, in the midst of that admiration, there’s also room for some jokes, which can range from chuckle-worthy to downright hilarious. NBA superstar Kevin Durant has found himself at the receiving end of more than a few in his time, with the most recent jabs referring to his ashy ankles. Fans across social media took great pleasure in clowning him and, now, even Serena Williams has joined with an A+ gag involving cooking spray.
NBA・1 DAY AGO
FastBreak on FanNation

The Golden State Warriors are in Phoenix to play the Suns on Tuesday night.
NBA・1 DAY AGO
FastBreak on FanNation

Devin Booker sent out a tweet after the Phoenix Suns defeated the Golden State Warriors.
NBA・20 HOURS AGO
fadeawayworld.net

Skip Bayless: “Kevin Durant Proves Once Again On National TV Why He's Clearly The Best Player On The Planet."

To the surprise of nobody, Kevin Durant has been one of the best performers in the NBA so far this season. The 2-time NBA champion has had a hot start to the season and is playing elite-level basketball for the Nets. One of the greatest scorers of all time, Durant has been a scoring machine this season.
NBA・28 DAYS AGO

Candace Parker still has Geno Auriemma beef: ‘We don’t like each other’

Candace Parker and Geno Auriemma, rivals since 2004, still do not like each other. That’s according to Parker, who spilled the tea about her relationship — or lack thereof — with the legendary UConn and USA women’s basketball coach to Bleacher Report’s Taylor Rooks. Parker said she doesn’t have a...
BASKETBALL・1 DAY AGO
San Francisco Chronicle

In one of the most star-studded G League transactions ever, the Warriors recalled Damion Lee, Klay Thompson and James Wiseman from Santa Cruz on Wednesday. But all the paperwork actually means is that the Warriors are back from their trip through Los Angeles and Phoenix, so the trio can practice again with the big club in San Francisco.
NBA・22 HOURS AGO
Insider

Candace Parker spoke with Bleacher Report's Taylor Rooks about her fallout with USA Basketball. The WNBA star blamed UConn coach Geno Auriemma for her Olympics snub and criticized USA Basketball. "I don't think Geno wanted me on the team," Parker said, adding, "It wasn't on the court." Candace Parker is...
BASKETBALL・1 DAY AGO
Insider

Pistons Cade Cunningham etching his name in history books after career-night vs. Kings

DETROIT -- It hasn’t even been a full month since rookie guard Cade Cunningham has suited up in a Detroit Pistons uniform. But the top overall pick in the 2021 NBA Draft is already making history. In Monday night’s loss to the Sacramento Kings, the Arlington, TX. native scored a...
NBA・15 DAYS AGO
Sportico

Legendary NBA Player Drazen Petrovic to Be Portrayed in Biopic

Legendary Croatian-born NBA player Dražen Petrović will be portrayed in Danilo Šerbedžija’s upcoming biopic film “Higher Force – The Drazen Petrovic Story” (working title), Variety reports. The film was penned by Ivan Turkovic Krnjak (“Lovebox”) and is being produced by Ljubo Zdjelarević and Ivor Šiber at Zagreb-based Kinoteka. The film will shoot next year in Croatia, Germany, and in the U.S. across Portland and New Jersey. It will be released in 2023 on the 30th anniversary of Petrović’ death. One of Croatia’s best known filmmakers, Šerbedžija previously directed “Tereza37” which was Croatia’s official Oscar entry this year. His other directorial credits include “72...
MOVIES・1 DAY AGO
hoopfeed.com

Michaela Onyenwere receives her 2021 WNBA Rookie of the Year trophy

This slideshow requires JavaScript. The New York Liberty hosted an event to present the 2021 WNBA Rookie of the Year trophy to Liberty forward and UCLA graduate Michaela Onyenwere on Wed. Nov. 17. The celebration included a trophy presentation, a Q&A, and an autograph session. Onyenwere, a Nike athlete, also...
BASKETBALL・14 DAYS AGO
Sporting News

What is the new WNBA Playoffs format? League to play more postseason games

The WNBA has approved a new playoffs format for the 2022 season, changing the way teams are seeded and expanding upon the number of postseason games played. In the past, eight teams – regardless of conference – qualified for the playoffs, with the top two teams each earning double-byes to the semifinals (or third round). The next two-best teams earned byes to the second round, while the remaining four teams competed in single-elimination games to see who advanced to the second round.
BASKETBALL・13 DAYS AGO
abc17news.com

NEW YORK (AP) — The WNBA suspended former Atlanta Dream players Courtney Williams and Crystal Bradford for their roles in an altercation outside of an Atlanta-area club in May and for related health and safety protocol violations. Williams received a two-game suspension and Bradford one. Both players are free agents, and the suspensions will be served starting with the first regular season game that each player is eligible to play following their signing with a new team.
NFL・8 DAYS AGO
USA TODAY

Candace Parker gets candid about 2016 USA Basketball snub: 'I don't think Geno wanted me on the team'

In a Bleacher Report interview, Candace Parker said she has no relationship with USA Basketball following her snub from U.S. Olympic team in 2016.
BASKETBALL・20 HOURS AGO
fadeawayworld.net

There are plenty of stories about Kobe Bryant's competitiveness and excellence. He was great both on and off the court, leaving a lot of memories for fans, media members, coaches, and fellow players. Just like his idol and mentor Michael Jordan, Kobe was a fierce competitor and didn't hesitate to...
NBA・1 DAY AGO
FastBreak on FanNation

Klay Thompson hit the game-winning shot in a scrimmage with the Golden State Warriors G-League team.
NBA・1 DAY AGO