Barcelona president Joan Laporta is reportedly desperate to wrap up a new deal for Ansu Fati.

The club began contract talks months ago with the 18-year-old to extend his current deal, which runs until June 2022.

The youngster has expressed his desire to continue at the Nou Camp, and his agent Jorge Mendes is in Barcelona ready to continue negotiations, leaving the club optimistic over seeing a deal over the finishing line soon, according to Marca. 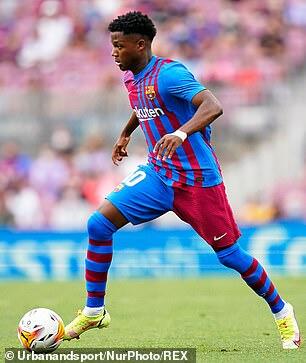 Barcelona want to offer Fati a new deal that reflects his new found prominence in the squad.

It was reported last month that Mendes had received an extension offer from Barcelona after the club's football director Mateu Alemany had been working on a proposal for a month and a half.

Mendes and the club reportedly have been in constant communication and have discussed that the contract will not be long-term on the basis that it will be reviewed later once Barcelona's economic situation has improved.

Fati has become one of Barca's greatest attacking strengths, particularly in the wake of the loss of talisman Lionel Messi.

He inherited Messi's infamous No 10 following the Argentine's departure and has swiftly replaced the Nou Camp veteran as Barcelona's most prized asset. 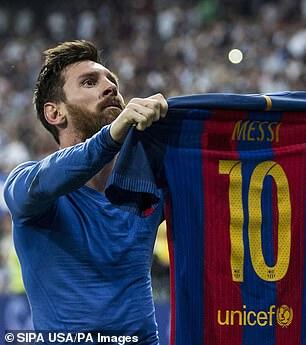 He made his debut during the 2019-20 campaign and has not stopped breaking records at the Nou Camp since.

With the Blaugrana, Fati has become the youngest player to score a LaLiga goal, to start and to score at the Nou Camp, to score and provide an assist in LaLiga and to score in the Champions League.

But his progress was halted when he sustained a serious knee injury during a match against Real Betis back in November 2020, leaving him sidelined for 10 months.

However, he returned to action in September and marked it with a goal in Barcelona's 3-0 win over Levante after coming off the bench in the 82nd minute.

Fati is just one member of a trio of youngsters Laporta is keen to tie down to the Nou Camp.

Pedri and Gavi are also in line for new deals, with the former's negotiations said to be the most advanced.

The Spanish wonderkid is said to be ready to sign a new deal at Barcelona until 2026 with a whopping £509million release clause.

The 18-year-old midfielder, who has already amassed over 50 appearances for the Catalans since making his first-team debut last season, was linked with a move away from the club as his current contract expires at the end of this season.

But the Catalans can breathe a sigh of relief after Pedri told them he is willing to commit his future.

The new deal will not only give the Spanish midfielder a wage rise but the hefty release clause is likely to scare off European giants such as Manchester City and Paris Saint-Germain - two of the richest clubs in the world.

The teenager signed for Barcelona from Las Palmas for just £4.2m in September 2019 and remained at the second division side for the 2019-20 season.

Pedri justified Barcelona's fee for him despite the fact he had never kicked a ball in professional football before he signed terms with the club, scoring four times in 37 games for the Canary Islands club.

He has since been ever-present for Barcelona, making 52 appearances in all competitions in his debut campaign with his displays earning him a spot in the Spain national side.

Manchester City manager Pep Guardiola has all but ruled out ever taking charge of another club in England The Spaniard is contracted at the Etihad Stadium until 2023 and could extend that, but expects to work elsewhere at some point in the future.Although he has expressed an interest in international football, the 50-year-old admits he has no clear vision of where his long-term future lies.I don't think I am going to train another club in England. I'm a part of this club.Pep GuardiolaOne thing he is sure about, however, is that he cannot see himself being employed by another Premier...
PREMIER LEAGUE・1 DAY AGO
The Guardian

The family home of Barcelona attacker Ansu Fati was burgled during the derby win against Espanyol. La Vanguardia says thieves robbed Fati's house in Sant Cugat on Saturday night while he was watching Barcelona's clash with Espanyol. The information claims that the assailants entered the floor above his to get...
PUBLIC SAFETY・6 DAYS AGO

Barcelona are keeping tabs on Cesar Azpilicueta's new contract talks with Chelsea. ESPN says Barça are tracking the defender's contract situation with his deal with Chelsea due to expire at the end of the season. Therefore, from January, if he doesn't sign a new contract at Stamford Bridge, he will...
PREMIER LEAGUE・13 DAYS AGO
Tribal Football

Spain coach Luis Enrique hails the performance of Gavi for victory over Sweden. Barcelona teenage midfielder Gavi was superb in Spain's 1-0 World Cup qualifying win against Sweden on Sunday night - so securing a place in next year's Qatar World Cup. Afterwards, Enrique discussed the performance of Gavi, who...
SOCCER・14 DAYS AGO
Tribal Football

Barcelona chief Mateu Alemany is upbeat on new contract talks with Ousmane Dembele. Alemany has shed some light on the Dembele situation as his deal runs down. “With Ousmane we've been speaking for a few months, they know what we think," he told Movistar. “His desire is to stay at...
SOCCER・8 DAYS AGO
tothelaneandback.com

BARCELONA (Reuters) – Volkswagen’s Spanish car maker SEAT has recommended unvaccinated and vaccinated employees sit separately in its canteen at its plant outside Barcelona to protect workers and ensure operational activity, the company said on Friday. The move, which involves having a separate section for workers who have not had...
WORLD・9 DAYS AGO
The Guardian

Manchester City went second after seeing off West Ham, Jamie Vardy scored twice as Leicester beat Watford, and Everton are now without a win in seven after losing at Brentford
PREMIER LEAGUE・23 HOURS AGO
bitcoinist.com

The non-fungible token (NFT) market has exploded in recent months. It has seen adoption in many different sectors, including music, food, and sports. Earlier this month, FC Barcelona announced a partnership with premium NFT marketplace Ownix to make the Club’s NFTs. This partnership was, however, short-lived as FC Barcelona on Thursday canceled the deal. The termination came just a few days before the Club’s first NFT collection auction was scheduled on the platform.
SOCCER・7 DAYS AGO
tothelaneandback.com

Nottingham Forest are interested in Tottenham Hotspur youngster Jamie Bowden. According to the 72 (h/t Peterborough Telegraph), Nottingham Forest could make a move for 20-year-old Tottenham Hotspur midfielder Jamie Bowden. The youngster who is currently on loan to Oldham Athletic is said to be on the radar of Forest. The...
PREMIER LEAGUE・10 DAYS AGO

Barcelona are planning a new contract offer for Ronald Araujo. New Barca coach Xavi is happy to count on the Uruguay defender over the long-term future. Sport says Barcelona are preparing a contract renewal for him, with his current deal ending in 2023, including a pay raise. The idea is...
SOCCER・4 DAYS AGO
Tribal Football

Chelsea are closing in on retaining the services of veteran defender Thiago Silva. The Brazilian centre-back has been a revelation since his free transfer move from Paris Saint-Germain at the start of last season. The 37-year-old was outstanding for the Blues in a 4-0 win over Juventus in the Champions...
PREMIER LEAGUE・4 DAYS AGO
tothelaneandback.com

Tottenham Hotspur U-23 prospect Dilan Markanday wins the Premier League 2 Player of the Month award for October. According to the official website of Tottenham Hotspur, Dilan Markanday has been awarded the Premier League 2 Player of the Month for October. He is one of the most promising players in the youth division and was consistent in his performances over the last few months.
PREMIER LEAGUE・13 DAYS AGO
Yardbarker

Chelsea defender Andreas Christensen was proposed the opportunity to join La Liga giants Barcelona as a free agent at the end of the season, according to reports. There have been questions raised over the future of the Blues centre-back as he is yet to agree a new deal at the club, with his current contract set to expire next summer.
PREMIER LEAGUE・4 DAYS AGO
tothelaneandback.com

Transfer News: Dilan Markanday of Tottenham Hotspur attracts interest from Championship clubs for a loan deal. According to FootballLeagueWorld (h/t StokeonTrentLive), Tottenham Hotspur youngster Dilan Markanday has interest from several clubs in the Championship for a loan transfer. He has earned himself a name following his excellent performances in the youth division.
PREMIER LEAGUE・2 DAYS AGO
The Guardian

Weekend football countdown: Get the latest from David Tindall as the 12-team draw for the European qualifying play-offs takes place
PREMIER LEAGUE・2 DAYS AGO
Autosport Online

The Catalunya circuit has one of the longest unbroken runs of any current Grand Prix venue, having been on the calendar continuously since its first race in 1991. The long term future of the race had been unclear in recent seasons due to the close involvement of the local authorities, and the need for the event to make financial sense.
MOTORSPORTS・3 DAYS AGO
San Diego Union-Tribune

Ballon d'Or contender Jorginho made amends for an error leading to Manchester United's goal with an equalizing penalty for Chelsea in a 1-1 draw in the Premier League
SAN DIEGO, CA・21 HOURS AGO