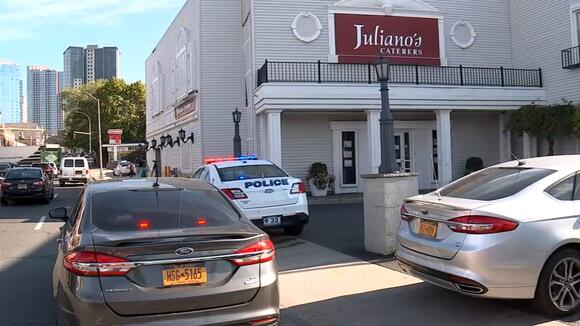 An off-duty cab driver was found dead in the parking lot of a Westchester County catering hall early Thursday. Police say the 62-year-old victim, who works at Express City Taxi, was shot twice outside Juliano's Caterers on Main Street in New Rochelle. Officers on patrol spotted his body just before 3 a.m. ALSO READ | What Gabby Petito's death by strangulation could mean for Brian Laundrie's case

He was identified as Andres Valenzuela, of New Rochelle, and he was transported to a local hospital where he was pronounced dead. A colleague at the taxi service said the victim ended his shift at 2:40 a.m., and his car was still running at the scene hours later. "He work a long time here at this company," dispatcher Marcos Pazos said. "I don't know what happened. I feel bad." The taxi cab company parks their cars along the wall adjacent to the catering hall, and three cars -- including the taxi the victim had been driving -- were towed from the scene. The circumstances leading up to the shooting are unclear at this time, and authorities were looking into whether it may have been a robbery attempt. The investigation is active and ongoing, and anyone with information is urged to contact the New Rochelle Police Department at 914-654-2300. LIGHTER NEWS | Name that pooch: New York Islanders adopt 3rd 'Puppy with a Purpose'

Officials say a man is in custody after stealing a school bus and crashing into several parked cars along the way.
BROOKLYN, NY・18 HOURS AGO
ABCNY

Police said when she asked the man why he hit her, he responded by making anti-Asian slurs.
NEW YORK CITY, NY・20 HOURS AGO
ABCNY

Suffolk Officer Tim Thrane, who spent weeks in a medically induced coma after being hit by an alleged drunk driver, was discharged to cheers Friday.
SUFFOLK COUNTY, NY・1 HOUR AGO
ABCNY

Before starting his training as a firefighter, Vincent Malveaux worked as an EMT for four years including throughout the coronavirus pandemic.
NEW YORK CITY, NY・5 HOURS AGO

A New Jersey police officer accused of killing a pedestrian and then taking the victim's body to his home was allegedly driving intoxicated, according to court documents.
NEWARK, NJ・2 DAYS AGO

"It was a gas leak," one resident told Eyewitness News. "I smelled it when I got home from work. I reported it. They ignored it and this was the result. This is what we get."
BROOKLYN, NY・2 DAYS AGO
ABCNY

Verlon Thomas, 36, is accused of ordering the girl to get into his car Monday afternoon in East New York.
BROOKLYN, NY・2 DAYS AGO
ABCNY

The teen's family said he has big dreams to go into real estate and had been helping at his father's business on the weekends when he's not in school.
BROOKLYN, NY・2 DAYS AGO
ABCNY

Dina Lohan, the mother of actress Lindsay Lohan, was sentenced Friday to 18 days behind bars after pleading guilty to felony drunk driving earlier this year.
MERRICK, NY・5 HOURS AGO
ABCNY

A video was posted on Snapchat showing the two students inside Platt High School in Meriden, north of New Haven.
CONNECTICUT STATE・2 DAYS AGO
ABCNY

Footage shows a man wearing an NYPD sweatshirt with a badge hanging around his neck push his way inside.
BRONX, NY・3 DAYS AGO