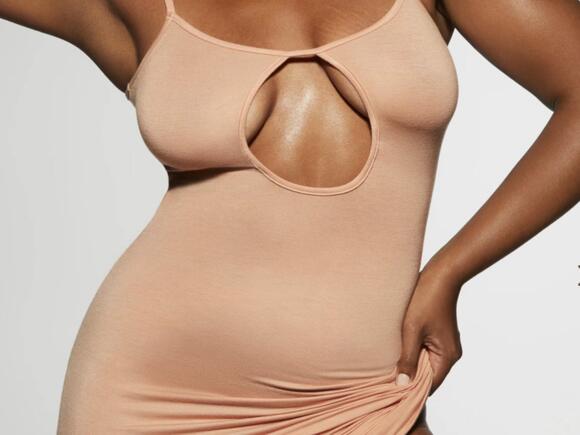 A new SKIMS sleep collection is set to drop on 15 October.

The shapewear and loungewear brand created by Kim Kardashian West announced the news on their official Instagram page, accompanied by two photos of the new products.

These spotlighted the new Keyhole Dress, a form-fitting, floor-length slip with a large key-hole cut-out feature below the bust.

“Coming soon in 3 new styles: the Keyhole Dress, Button Up Sleep Tank, and Sleep Short and in 5 fall-ready colors. Shop Sleep on Friday, October 15 at 9AM PT / 12PM ET. Join the waitlist now via the link in bio for early access to shop.”

Other items in the collection include a Sleep Pant, Sleep Top, Sleep Robe, Sleep Button Up Tank and Sleep Boxer.

Launched in September 2019, the reality star’s shapewear brand reportedly sold millions of dollars worth of product within the first few minutes of going on sale.

In April this year, the business was valued at $1.6bn (£1.2bn), making the second oldest sister in the Kardashian clan a billionaire .

And in a major coup for the brand, Kate Moss was announced as the new SKIMS ambassador in July .

The unlikely partnership came about after the two women visited Rome together over the summer with Moss’ model daughter Lila Grace.

Kardashian made the announcement on Instagram and Twitter, posting two photographs of Moss modelling two different sets of SKIMS underwear.

She wrote: “Introducing Kate Moss for SKIMS. I first met Kate in 2014 through Ricardo Tisco, and was instantly struck by her cheeky humour, authentic and classic beauty – we’ve been friends ever since!

“She is THE fashion icon, defining a whole generation of style, and I am honoured to feature her as the new face of SKIMS this summer!”

The news followed the announcement that SKIMS would also be the official supplier of underwear, loungewear and pyjamas for Team USA’s female athletes during the Tokyo Olympic and Paralympic Games .

In addition to SKIMS, the entrepreneur and budding lawyer also includes KKW Beauty in her business empire, with the range undergoing a rebrand in August.

Kim Kardashian and daughter North have launched a joint TikTok account which has already amassed 66K followers in 12 hours. On Thursday, the mother-daughter duo launched the joint account to share videos from their family’s Thanksgiving holiday with the account being updated with 14 new videos in 24 hours. The...
TV & VIDEOS・11 DAYS AGO
E! News

Watch: Kim Kardashian Thanks Kanye "Ye" West at 2021 PCAs. The 37-year-old Keeping Up with the Kardashians star left little to the imagination on Tuesday, Dec. 7, at the 2021 People's Choice Awards, turning heads in a silver chainmail mini dress as she cheered on sister Kim Kardashian, who took home the Fashion Icon Award at the star-studded ceremony.
CELEBRITIES・8 HOURS AGO
Popculture

Kim Kardashian West is going full speed ahead with her relationship with SNL star Pete Davidson. The SKIMS founder and the comedian have had a PDA-filled relationship for fans, they have been lined until at least Kardashian's SNL performance in October. The couple recently held hands as they stepped out in Santa Monica, California for dinner at Giorgio Baldi, an Italian restaurant.
CELEBRITIES・12 DAYS AGO
Boston 25 News

North West, 8, seems to know how to keep mom Kim Kardashian in line. This has been going on for years. Keep reading to find out more about some of the times that North called her mom out. North In Disbelief On How Her Mom Got Famous. One of the...
CELEBRITIES・11 DAYS AGO
Marin Independent Journal

Pete Davidson’s not hiding his ‘love bite’ from Kim Kardashian

Kim Kardashian and Pete Davidson haven’t issued any official statements that they are dating, but they haven’t exactly been hiding their budding romance. Kardashian, 41, and Davidson, 28, have been photographed holding hands at a California theme park on Oct. 29, going out on dates in his hometown of New York City and holding hands in Palm Springs last week.
CELEBRITIES・14 DAYS AGO
rollingout.com

Ye and Kim Kardashian’s love for one another doesn’t seem to have waned despite their impending divorce. Although she has been linked to comedian Pete Davidson recently and he with several other women over the past few months, Ye feels that the two will eventually reunite because it’s God’s plan.
CELEBRITIES・11 DAYS AGO
The Independent

A Dutch tourist got the surprise of his life when he found himself seated next to Kim Kardashian and Pete Davidson on a breakfast date. Music journalist Paul Barewijk posted selfies with both Kardashian and Davidson – who began dating shortly after appearing on Saturday Night Live together – on Instagram on Saturday (27 November). Barewijk captioned the social media post: “OMG MAKE ME CRAZY! SITTING NEXT TO KIM KARDASHIAN AND PETE DAVIDSON FOR BREAKFAST!”People reported that he ran in to the celebrity couple at the Beverly Hills Hotel in Los Angeles, and that he spotted 28-year-old Davidson first....
CELEBRITIES・9 DAYS AGO

We're so glad the SKIMS Black Friday sale is a thing, because we're officially obsessed with the brand. Yup, looks like Kim Kardashian is a powerhouse in more than one way because her shapewear label (which has quickly expanded to much more) is legit amazing. If you have a pair...
BEAUTY & FASHION・14 DAYS AGO
Elle

The Kardashians are known for rocking super heavy glam looks from time to time, which are perfect for their fancy events and red carpet moments. But to jump on the Piccadilly Line and head to our local Costa? Not so much. While is why we love a no make-up make-up...
CELEBRITIES・7 DAYS AGO
Teen Vogue

On November 28 news broke of cutting-edge designer Virgil Abloh's death from cancer at 41, just days before he was set to present his Spring/Summer 2022 collection for Louis Vuitton at an uptempo Miami-based show. Vuitton and Bernard Arnault, CEO of LVMH, decided to still present the collection as planned, presenting it under the title “Virgil was here.”
BEAUTY & FASHION・5 DAYS AGO
Page Six

Kim Kardashian appears to be bonding with Pete Davidson’s sister — at least on social media. Casey Davidson posted a photo to Instagram on Wednesday of her and her “Saturday Night Live”-starring brother sitting courtside at a Brooklyn Nets game and wrote, “caption this.” Naturally, fans immediately took to the comments section to roast Pete over his burgeoning romance with the KKW Beauty founder, but more notably, Kardashian “liked” the photo.
CELEBRITIES・4 DAYS AGO

Kanye West Is Down Bad For Kim Kardashian

Following last night’s revealing Thanksgiving prayer, Kanye West continues to campaign for his estranged wife, Kim Kardashian, to consider taking him back. On Friday afternoon, the father of four shared a sweet throwback photo with the socialite, along with a TMZ headline that reads, “Kanye West Says God Will Bring Kim and Him Back Together, Inspire Millions.”
CELEBRITIES・11 DAYS AGO
Elle

Kim Kardashian Reacts To Kanye West's Claims They'll Be 'Back Together'

Kim Kardashian has reportedly not been swayed to reconsider her divorce from Kanye West after the rapper made claims that God would 'bring them back together.' In a post shared to his Instagram Story earlier this week, the 44-year-old quoted an article from TMZ alongside a throwback photo of him and his estranged wife kissing. The throwback post came just a few days after he made a public speech about his plans to keep his family together and 'change the narrative' around his marriage.
CELEBRITIES・9 DAYS AGO
Complex

Kim Kardashian and North West made their TikTok debut on Thursday, launching a joint channel with dances to songs by Kanye West, Adele, Playboi Carti, and more. After launching the channel with a pair of videos that showed various shots of Kylie Skin products, a third video, titled “Me and Northie” and soundtracked by Carti’s song “Sky,” shows Kim and North chilling at home and riding around together in a vehicle.
BEHIND VIRAL VIDEOS・11 DAYS AGO
enstarz.com

Kanye West, who has since changed his name to Ye, started to realize what he lost now that Kim Kardashian started dating again. On Wednesday, West made an appearance at the Los Angeles Mission's Annual Thanksgiving event, where he publicly begged for reconciliation with Kardashian amid their divorce. According to...
CELEBRITIES・12 DAYS AGO
TODAY.com

Are skintight catsuits a yay or nay? Jenna weighs in on the style trend

Move over party dresses! Catsuits and onesies are trying to claw their way to fashion dominance this season. Skintight catsuits are the latest trend that celebrities are embracing, but the verdict is still out on whether or not they make the purr-fect outfit. On TODAY with Hoda & Jenna this...
PETS・17 HOURS AGO
Hypebae

Kim Kardashian reveals what you need to know if you want to get your hands on anything from the Fendi x SKIMS collab for the last time. “Coming December 10: Fendi x SKIMS Drop 2. A special, second release of best-selling styles from Drop 1: the logo printed bodysuits and underwear,” she captioned an Instagram post. “This is the final chance to own a piece of the groundbreaking collaboration between @Fendi and @SKIMS.”
APPAREL・1 DAY AGO
Cosmopolitan

We’ve seen Kim Kardashian rock quite possibly every kind of beauty look under the sun, from sultry contoured glam to vibrant party looks and everything in between. But now, it seems like the reality star is welcoming in a new beauty era – and it’s one that, surprisingly, sees her going a bit more au naturel.
BEAUTY & FASHION・1 DAY AGO