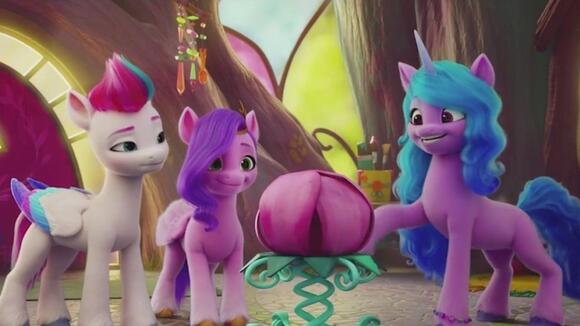 “My Little Pony” was first introduced nearly 40 years ago with six original pony characters. Now, they’re back with an new animated feature on Netflix.

Since the franchise’s launch, there’s been movies, an animated series, books, toys, and lots of music.

The ponies, with some new friends, return with a magical message in “My Little Pony: A New Generation,” which is streaming now on Netflix.

NEW YORK — Miraculous events are happening on Crockett Island, but they do come at a price. Actress Kate Siegel, who is also one of the best criers in the business, spoke with the PIX11 Morning News about the thrilling, limited Netflix series “Midnight Mass” and her movie “Hypnotic.”
NEW YORK CITY, NY・9 DAYS AGO
PIX11

Kim Fields has come a long way from her early days as a child actor in hit shows like “The Facts of Life.” In addition to being a star in front of the camera in film and television, Fields also directed, produced and written various projects. She basically does it all. Fields’ latest project, the […]
MOVIES・9 DAYS AGO
PIX11

Trouble is brewing on every front in “True to the Game 3,” and the police are trying to do what they can to keep the peace. Actor, producer, and singer Columbus Short and actress, TV host and producer Vivica A. Fox spoke with the PIX11 Morning News to discuss the upcoming movie and what fans […]
MOVIES・8 DAYS AGO
GamesRadar+

6 New Netflix, Amazon, and Disney Plus movies and shows to stream this weekend

Whether you're enjoying the long Thanksgiving weekend or are just kicking back for a regular end-of-the-week break, there's plenty for you to watch on all your favorite streamers. For one thing, your next binge-watch is sorted, no matter what you're in the mood for. The first two episodes of Hawkeye,...
MOVIES・12 DAYS AGO

Bruised Cast: Where You've Seen The Netflix Movie Stars Before

Netflix has been coming out with plenty of amazing original movies, from the star-studded offering of the Red Notice cast to the third entry in The Princess Switch series. One of the latest releases was Bruised, from Academy-Award winner Halle Berry in her directorial debut. The film follows the story...
MOVIES・14 DAYS AGO
darkhorizons.com

Netflix Working On A Gorillaz Movie

Netflix is working on an animated film about iconic virtual band Gorillaz with frontman Damon Albarn confirming the project in a recent interview with Apple Music (via Collider). The band was created in 1998 by singer-songwriter Albarn and artist Jamie Hewlett and is famously comprised of animated members and a...
TV & VIDEOS・14 DAYS AGO
Popculture

Netflix's slate of Christmas releases is filled with romantic comedies and family favorites, but one movie stands out from the rest. A Boy Called Christmas, now streaming on the platform, is a big-budget holiday fantasy romp that will surely get a lot of airplay in homes this season. Director/co-writer Gil Kenan, who helmed 2006's Monster House and co-wrote Ghostbusters: Afterlife, takes viewers into a mystical world of elves, magic and talking animals in what is clearly the 2021 holiday flick with the most care put into it out of all its peers. (It's got a star-studded cast as well, with Kristen Wiig, Sally Hawkins, Michiel Huisman, Maggie Smith, Stephen Merchant and young lead Henry Lawfull.)
MOVIES・14 DAYS AGO
Popculture

Netflix Is Losing an Iconic Heath Ledger Movie Next Week

If you're looking for something to watch over the holiday weekend, there is an iconic cult comedy leaving Netflix that you may want to catch. A Knight's Tale, a 2001 action-comedy starring Heath Ledger, is leaving the streamer on Nov. 30, and fans should definitely sneak in a viewing before it's gone. A Knight's Tale Is about a poor squire name William (Ledger) who through a stroke of luck gets a chance to change his stars and try to become a knight. The film is loosely medieval, incorporating rock music and more modern elements into the story and tone.
MOVIES・14 DAYS AGO

'Tis the season for holiday films, and A Holiday Chance is a great one!. We'll be cheesy about it and suggest you take a chance on this holiday-themed movie full of family, heart, soul, and even some sexiness. It's good vibes only with this one adding some flavor to the genre.
MOVIES・14 DAYS AGO
thehendersonnews.com

Looking for a way to get in the holiday spirit? Netflix is gifting viewers with plenty of festive films to choose from this season. Learn more about five new titles, below. ’Tis the season for family infighting! Control freak Caroline Christmas (Nathalie Cox) invites her quirky sisters (played by Elizabeth Hurley, Talulah Riley, and Naomi Frederick) to her fabulous country manor for a peaceful holiday retreat. But when their estranged father (Kelsey Grammer) turns up with his much-younger girlfriend, they don’t see his presence as a present. Available now.
MOVIES・12 DAYS AGO
epicstream.com

Netflix's Avatar: The Last Airbender recently started filming in Canada, and fans are excited to see how the live-action adaptation will live up to the original Nickelodeon animated series. With production finally underway, fans are looking forward to get their first look at the Netflix series, and now, a new cast photo has teased how Aang will appear in the show.
TV SERIES・9 DAYS AGO
TODAY.com

The winner of two Emmys for her role as Claire Dunphy on “Modern Family,” Julie Bowen joins the 3rd Hour of TODAY to talk about her new Netflix movie “Mixtape,” in which she plays a young grandmother. She also talks about playing a potential romantic interest for Larry David on “Curb Your Enthusiasm,” saying, “I was in awe … he is a legend.”Nov. 29, 2021.
MOVIES・9 DAYS AGO
AOL Moviefone

Welcome to Female Filmmakers in Focus, featuring recommendations for films directed by women to seek out each week. This week, Valerie Weiss talks about her new movie ‘Mixtape’ and recommends Lone Scherfig’s ‘Italian For Beginners.’. ‘Mixtape’ - directed by Valerie Weiss. Born in Philadelphia, Pennsylvania, Valerie Weiss took a long...
MOVIES・4 DAYS AGO
fox32chicago.com

Black Widow Has a Big Continuity Error We All Missed, and It's My Little Pony's Fault

Now that Marvel's Black Widow is on Disney+ with the rest of the MCU, fans are taking a much deeper look at the film as the eternal search for Easter eggs continues. Sometimes, however, fans find more than just Easter eggs. In the case of Black Widow, a mistake has been discovered in the film's opening scenes, and it surprisingly involved the popular My Little Pony toy line.
MOVIES・6 DAYS AGO
wearemoviegeeks.com

Can’t wait for January when the new SCREAM movie debuts in theaters? Here’s a featurette on what makes Ghostface a horror icon, as well as new character posters, to tide you over until then. Twenty-five years after a streak of brutal murders shocked the quiet town of Woodsboro, a new...
MOVIES・3 DAYS AGO
GeekTyrant

A few new character posters have been released for the next chapter of the Scream franchise, and they focus on the legacy franchise cast members. The posters feature Neve Campbell back in the role of Sidney Prescot, David Arquette as Dewey Riley, and Courteney Cox reprising her role as Gale Weathers.
MOVIES・2 DAYS AGO
First Showing

"You can hear it too?" "It's calling." Netflix has released an official teaser trailer for the new anime project Bubble, a new feature film from the "Death Note" and "Attack on Titan" filmmaker Tetsuro Araki. How's this for a wild concept: The story is set in Tokyo, after bubbles that broke the laws of gravity rained down upon the world. Cut off from the outside world, Tokyo has become a playground for a group of young people who have lost their families, acting as a battlefield for parkour team battles as they leap from building to building. In a Tokyo where gravity has broken, a boy and a girl are drawn to each other. Araki offers this quote with the teaser: "I hope you enjoy what we’ve created! While it will definitely feature exhilarating action and beautiful background art, I hope that I can also take everyone to even more unexpected places this time." The voice cast features Jun Shison, Mamoru Miyano, Yuki Kaji, and Tasuku Hatanaka. It's only first look teaser but whoa, this is fun! Tons of parkour but also another imaginative alternate world.
COMICS・2 DAYS AGO