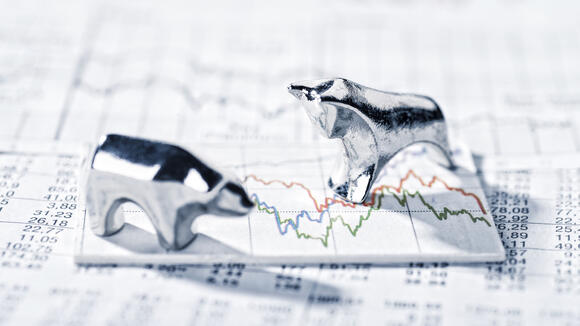 The futures were up across the board Thursday, after another tug-of-war day on Wednesday that saw the S&P 500 and the Nasdaq post solid gains, while the Dow Jones industrials ended flat. Earnings season for the big boys got off to a solid start with both JPMorgan and Delta Air Lines providing solid results, although Delta's forward commentary on higher jet fuel pricing hurting fourth-quarter results took the shares down almost 6%. The soaring fuel prices the company discussed remain a big concern on Wall Street, as oil prices are at their highest levels since 2014 and natural gas prices have skyrocketed as well. Interest rates were a nonissue, with some buying across the longer end of the yield curve.

Top strategists across Wall Street remain focused on rising interest rates, Federal Reserve tapering due to begin soon, big increases in energy costs, ongoing supply chain issues and stagflation worries, and many analysts are not nearly as positive on the upcoming earnings season as they were for the second quarter. Toss in the debt ceiling and China worries, and the cauldron continues to simmer.

These are the top analyst upgrades, downgrades and initiations seen on Thursday, October 14, 2021.

AT&T Inc. ( NYSE: T ): KeyBanc Capital Markets upgraded the venerable telecommunications giant's stock to Sector Weight from Underweight. The shares have traded in a 52-week range of $25.01 to $33.88 and have a consensus price objective of $31.49. The final trade for Wednesday was reported at $25.30 per share.

Abbott Laboratories ( NYSE: ABT ): Redburn started coverage of the pharmaceutical leader with a Neutral rating. The shares have traded in a 52-week range of $103.13 to $129.70 and have a consensus target price of $132.28. The last trade for Wednesday was reported at $117.

ArcelorMittal ( NYSE: MT ): The Credit Suisse upgrade of the European steel giant to Outperform from Neutral included a target price hike to $42 from $34. The consensus target is $47.88. The stock closed on Wednesday at $31.02.

Assurant Inc. ( NYSE: AIZ ): Piper Sandler started coverage with an Overweight rating and a $200 price target. The consensus target is lower at $189.80 but still well above Wednesday's close at $160.18.

Avis Budget Group Inc. ( NASDAQ: CAR ): Though Morgan Stanley downgraded shares of the rental car giant to Underweight from Equal Weight, it also boosted the price target from $85 to $110. The consensus target is $103.17. The shares closed Wednesday at $149.86, which was down almost 3% on the day, and the stock was hit further in premarket trading, retreating an additional 5%.

Bed Bath & Beyond Inc. ( NASDAQ: BBBY ): Morgan Stanley downgraded the former meme stock favorite to Underweight from Neutral and reduced the price objective to $12 from $18. The consensus target is up at $18.93. The final trade for Wednesday hit the tape at $14.44 a share.

Beyond Meat Inc. ( NASDAQ: BYND ): This is the Zacks Bear of the Day stock. The analyst points out that the plant-based meat firm has fallen well short of earnings estimates over the last year and is projected to post an even larger adjusted loss in 2021. Shares last closed at $104.99 apiece, and the consensus price target is $116.71.

Burlington Stores Inc. (NASDAQ: BURL): Loop Capital lowered its Buy rating on the discount clothing outlet to Hold and slashed the target price to $285 from $410. The consensus target is $370.21. The stock closed on Wednesday at $264.17.

Caterpillar Inc. ( NYSE: CAT ): Cowen started coverage of the industrial giant with an Outperform rating and a $241 price target. The much lower consensus price objective of $169.06 is also less than Wednesday’s closing print of $188.94 per share.
ALSO READ: What’s Up With Apple: No to Sideloading, Piracy at Apple TV+ and More
Delek US Holdings Inc. ( NYSE: DK ): Goldman Sachs upgraded the refiner to Buy from Neutral and has a $25 price target. The posted consensus target is $22.80. The shares closed at $20 on Wednesday.

IronSource Ltd. ( NYSE: IS ): Credit Suisse began coverage with an Outperform rating and a $16 price target. The consensus target is $12.25. The shares were last seen Wednesday at $11.09 but were up almost 4% in premarket trading.

Microchip Technology Inc. ( NASDAQ: MCHP ): Stifel started coverage with a Hold rating and a $76 price target. The consensus target is up at $93.46. The last trade Wednesday was posted at $70.25.

National Vision Holdings Inc. (NYSE: EYE): Morgan Stanley upgraded it to Overweight from Equal Weight and has a $70 price target. The consensus target is $60. The stock closed on Wednesday at $56.27. Shares were up almost 5% in the premarket.

Neurocrine Biosciences Inc. ( NASDAQ: NBIX ): Even though Morgan Stanley downgraded the shares to Equal Weight from Overweight, the firm nudged the price target from $110 to $112. The consensus target is $122.67. The last trade for Wednesday came in at $103.65.

Walmart Inc. ( NYSE: WMT ): This stock was named the Bull of the Day at Zacks, which said that its outlook remains strong, so its yearlong underperformance could make for an enticing entry point. Shares most recently closed at $138.37 and have a consensus price target of $168.82, which would be an all-time high.

Wynn Resorts Ltd. ( NASDAQ: WYNN ): Goldman Sachs lowered the price target on the luxury casino group to $102 from $117. The consensus target is $109.42. The last trade on Wednesday was reported at $92.44.
ALSO READ: 5 Dividend-Paying Sin Stocks to Buy May Survive a Massive Market Sell-Off
Goldman Sachs continues to favor three telecom infrastructure stocks ahead of their earnings reports. Though the stocks have had a powerful run over the past few years, they have backed up nicely, offering long-term investors much better entry points.

These are five stocks for aggressive investors looking to get share count leverage on companies that have sizable upside potential. While not suited for all investors, they are not penny stocks with absolutely no track record or liquidity, and Wall Street firms do have research coverage.
STOCKS・1 DAY AGO
Investor's Business Daily

The Dow Jones Industrial Average slipped lower, but the Nasdaq was the major index that plunged hardest. Tesla (TSLA) took a tumble following an Elon Musk move. Boeing (BA), Microsoft (MSFT) and Apple (AAPL) were among the worst blue chips. But it was DocuSign (DOCU) investors who were most badly hurt as the stock cratered on earnings.
STOCKS・1 DAY AGO
The Motley Fool

Here's My Top Stock to Buy in December

Cramer's week ahead: Stocks may be in for more punishment

The besieged mobility platform's investors have another headache to contend with.
STOCKS・1 DAY AGO
The Motley Fool

These companies should deliver above-average dividend growth in the coming years.
STOCKS・6 HOURS AGO
The Motley Fool

Costco is one of several widely followed stocks set to announce earnings results over the next few days.
STOCKS・2 HOURS AGO
The Motley Fool

Tesla and Atlassian more than doubled the return of the S&P 500 in 2021, and they're well positioned to do it again next year.
STOCKS・2 DAYS AGO

The wild back-and-forth swings in the market at these nosebleed levels seem to indicate that some rough sledding could be coming our way. Getting some safety into portfolios now makes good sense.
STOCKS・2 DAYS AGO
The Motley Fool

Riding the Oracle of Omaha's coattails is often a moneymaking proposition.
STOCKS・2 DAYS AGO
MarketWatch

A wild swing occurred in the stock market, as more than four of five S&P 500 stocks rose at least 1%.
STOCKS・2 DAYS AGO
The Motley Fool

2 Tech Stocks To Buy If The Market Crashes

These are two of the world's most high-quality businesses that investors should be ready to scoop up during future stock market carnage.
STOCKS・2 DAYS AGO
The Motley Fool

Why Beyond Meat Plunged by 29% in November

The plant-based meat producer is facing a fall in demand as more people dine out.
MARKETS・1 DAY AGO
The Motley Fool

These fast-growing companies are set up for impressive growth in the long haul.
STOCKS・2 DAYS AGO
MarketWatch

Why ESS Tech Stock Slumped More Than 11% in November

The recently public energy storage solutions company is off to a roller-coaster start.
STOCKS・2 DAYS AGO
MarketWatch

Microsoft Corp. stock outperforms competitors despite losses on the day