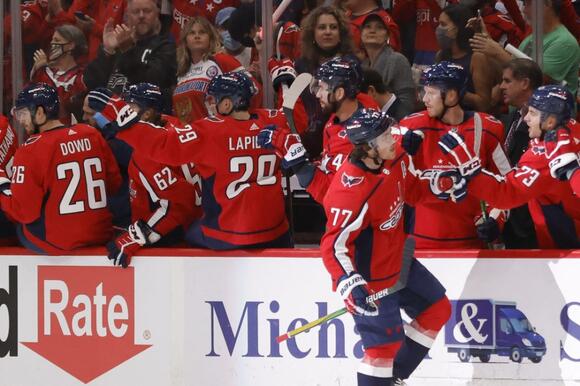 Alex Ovechkin scored twice in the third period to move into sole possession of fifth place on the NHL’s all-time goal list Wednesday night, leading the Washington Capitals to a 5-1 win over the visiting New York Rangers in the season opener for both teams.

The win also produced a milestone for Capitals coach Peter Laviolette. He earned his 674th win behind the bench, breaking the mark he shared with John Tortorella for the most wins by an American-born coach

The Capitals were in control before Ovechkin’s goals thanks to a first-period goal by Oshie, who scored off an Ovechkin feed at 4:39, and the goals by Schultz and Lapierre, who tallied 24 seconds apart in the second. Washington outshot New York 15-5 in the middle period.

Lapierre, 19, became the first Capitals player to score his first goal as a teenager since Andre Burakovsky scored in his NHL debut on Oct. 9, 2014.

Ovechkin — drafted first overall by the Capitals in 2004, shortly after Lapierre turned 2 years old — scored his 731st career goal, moving him into a tie with Marcel Dionne for fifth place all-time, by putting back the rebound of a power-play shot by Anthony Mantha 2:37 into the third.

Ovechkin needed fewer than 10 minutes to collect goal No. 732. Longtime teammate Evgeny Kuznetsov fired the puck from center ice off the boards and to Ovechkin, who surged past K’Andre Miller and backhanded the shot past Georgiev with 7:59 left.

A few minutes later, the Capital One Arena scoreboard aired a pre-taped video of Dionne congratulating Ovechkin and putting on a Capitals hat, which he said he’d wear for a day.

Ovechkin, who signed a five-year contract with the Capitals in July, is nine goals away from tying Brett Hull for fourth place and 162 goals behind the all-time leader, Wayne Gretzky.

Alex Ovechkin capped his 28th career hat trick by scoring 4:02 into the third period to lead the host Washington
NHL・8 DAYS AGO
ourcommunitynow.com

Defenseman Ryan Lindgren barely beat the third-period buzzer to lift the New York Rangers to a 5-4 victory over the Buffalo Sabres on Sunday night. Lindgren’s heroics came after the teams scored three goals each in a wild second period,
NHL・12 DAYS AGO
nbcsportsedge.com

The App is Back! Don’t forget to download the NBC Sports EDGE app to receive real-time player news, mobile alerts and track your favorite players. Plus, now you can check out articles and player cards. Get it here!. Alex Ovechkin showcased that he is far from being past his prime...
NHL・13 DAYS AGO
Reuters

Alex Ovechkin scored twice in a three-point outing and goaltender Ilya Samsonov collected his second consecutive shutout as the visiting Washington Capitals claimed a 4-0 victory over the San Jose Sharks on Saturday. Conor Sheary also scored twice for Washington, which is on a 6-0-1 run, while Samsonov stopped 22...
NHL・14 DAYS AGO

Ovechkin, Rivera among those congratulating Spirit for NWSL title originally appeared on NBC Sports Washington. The Washington Spirit made history Saturday as the team won its first NWSL championship, defeating the Chicago Red Stars 2-1. The Spirit becomes the latest Washington team to win a trophy, joining the Nationals, Mystics, and Capitals, who have won a championship over the past three years.
SPORTS・14 DAYS AGO
insidehockey.com

SEATTLE – Alex Ovechkin scored his 745th career goal in Washington’s 5-2 loss to the Seattle Kraken. With the third period tally, the Caps forward notched his 15th goal of the season to go along with 15 assists for 30 total points. Insidehockey.com videotaped Ovechkin’s pre-game routine and his playful...
NHL・12 DAYS AGO
NHL

Alex Ovechkin continues his incredible start to the year

The App is Back! Don’t forget to download the NBC Sports EDGE app to receive real-time player news, mobile alerts and track your favorite players. Plus, now you can check out articles and player cards. Get it here!. It seems like every time Alex Ovechkin records a point, especially if...
NHL・8 DAYS AGO
NBC Washington

It's Not Just Goals, Alex Ovechkin Is Racking Up Assists Too

It's not just goals, Alex Ovechkin is racking up assists too originally appeared on NBC Sports Washington. As Alex Ovechkin keeps racking up goals, a lot of focus around him has been on his climb up the all-time goals list. As he chases Wayne Gretzky's goal record, a record that has long been considered impossible, you could excuse Ovechkin for shooting at every conceivable opportunity. Yet, through 20 games, Ovechkin has been racking up even more assists than goals. Wednesday's 6-3 win over the Montreal Canadiens is a good example. Ovechkin recorded three points in the game, all assists.
NHL・10 DAYS AGO
Sportsnaut

Artemi Panarin scored the go-ahead goal with 8:25 to play the third period and added an assist to help lead
NHL・8 DAYS AGO
NBC Washington

All about Alex Ovechkin with stats and contract info originally appeared on NBC Sports Washington. Ever since getting drafted first overall in the 2004 NHL Entry Draft, Alex Ovechkin has proven to be the greatest goalscorer the sport has ever seen. Ovechkin's chase to reach Wayne Gretzky's all-time goals mark...
NHL・8 DAYS AGO

As Capitals defenseman Dennis Cholowski greeted Alex Ovechkin after the captain’s third goal of the night, it seemed surreal to Cholowski that he’d even get to bask in such a moment. In a 4-3 win over the Florida Panthers on Friday night at Capital One Arena, the Capitals were led...
NHL・8 DAYS AGO
Yardbarker

The New York Rangers have produced a lot of memorable moments for fans over the last decade. Whether it be during the regular season or postseason, there have been situations that will be enshrined in our brains for a lifetime. Looking back at the top five goals of the past 10 seasons, they all have one thing in common – the playoffs.
NHL・7 DAYS AGO
NBC Washington

Ovechkin named Star of the Week for third time this season originally appeared on NBC Sports Washington. The NHL announced Monday that Capitals forward Alex Ovechkin was its First Star of the Week after he scored four goals with three assists to help lead Washington to three straight wins. Ovechkin...
NHL・5 DAYS AGO
thedallasnews.net

Washington Capitals coach Peter Laviolette has been around long enough to know that the difference between winning and losing in the NHL can be pretty narrow. Like the width of a goalpost. The Capitals, who will play host to the Columbus Blue Jackets on Saturday night, are coming off a...
NHL・1 DAY AGO

Ovechkin reaches 750 career goals faster than Howe, Jagr originally appeared on NBC Sports Washington. Alex Ovechkin continues to march towards Wayne Gretzky’s goal-scoring record, but the Washington Capitals forward is reminding everyone how great he’s been throughout his NHL career. The 36-year-old scored his 750th career goal against the...
NHL・6 HOURS AGO
Herald-Palladium

WASHINGTON (AP) — Alex Ovechkin found a new goaltender to score on for another milestone goal, though this time the name rang a bell. Ovechkin beat Daniil Tarasov for his 20th goal of the season and 750th of his NHL career to help the Washington Capitals beat the Columbus Blue Jackets 3-1 Saturday night and snap a two-game skid.
NHL・4 HOURS AGO
NHL

Forward joins Gretzky, Howe, Jagr in second period against Blue Jackets. Alex Ovechkin notches goal No. 750 of his career as he whips a hard shot past Daniil Tarasov off the rush to make it 2-0 00:39 •. Alex Ovechkin scored NHL goal No. 750 for the Washington Capitals on...
NHL・7 HOURS AGO
Sportsnaut