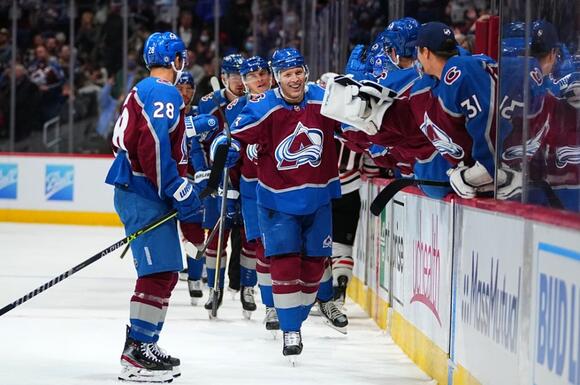 Gabriel Landeskog, Bowen Byram and Nazem Kadri each had a goal and an assist, Jack Johnson also scored, and the Colorado Avalanche beat the Chicago Blackhawks 4-2 on Wednesday night in Denver.

Colorado scored the first three goals in a game that was the season opener for both teams.

Darcy Kuemper made 32 saves for Colorado, which played without head coach Jared Bednar and center Nathan MacKinnon, both away from the team due to COVID-19 protocols. Both are asymptomatic and could return Saturday if they test negative multiple times.

The Avalanche took the early lead when Andre Burakovsky passed to Johnson, who was skating down the middle of the ice. Johnson came in alone on Fleury after Chicago’s Tyler Johnson and Jack McCabe collided, and he beat Fleury high with a backhand at 4:26 of the first period.

It didn’t take long for Colorado to add to the lead. Cycling the puck down low, Landeskog passed to Erik Johnson at the point. Erik Johnson’s shot went of Kadri and then Landeskog and past Fleury at 5:48.

Byram made it 3-0 midway through the first when he came down the left side, got a pass from Landeskog from the other side of the zone and beat Fleury over his left shoulder at 9:34. It was Byram’s first NHL goal in his 20th game.

The Blackhawks got one back on a power play late in the first period when Kubalik’s blast from the right point beat a screened Kuemper at 16:47.

Chicago had a great chance in the second period when Kirby Dach poked the puck from Samuel Girard and went in alone on Kuemper. Dach tried to go between the goalie’s pads, but Kuemper made the save to keep it a 3-1 game.

Kuemper stopped another Dach attempt minutes later, and then Kadri scored at 16:12 to make it 4-1.

Murphy got the Blackhawks within two goals when he scored at 15:13 of the third period.

Chicago got a power play late in the third and Fleury went off for an extra skater with 3:26 left, but the Blackhawks didn’t score again.

3 Takeaways From the Avalanche’s Win Over the Sharks

Prior to the start of the regular season, most pundits had picked the San Jose Sharks to finish near the bottom of the league, projecting the team to finish behind even the expansion Seattle Kraken. It was surprising then that the Sharks entered Ball Arena Saturday night with a 7-5-1 record in what has turned out to be a hotly contested Pacific Division.
NHL・13 DAYS AGO
Fear The Fin

Sharks at Avalanche: Lines, how to watch & open thread

The San Jose Sharks are finally healthy. Can the roster fall back into place tonight against the Colorado Avalanche?. Read about the questions and concerns ahead of tonight’s game in our preview here. Here’s everything you need to know to tune in:. Lines. SAN JOSE SHARKS. Jonathan Dahlen — Logan...
NHL・14 DAYS AGO
9News

VANCOUVER, BC — Nazem Kadri and Mikko Rantanen each had a goal and two assists as the Colorado Avalanche beat the Vancouver Canucks 4-2 on Wednesday night. Cale Makar had a goal and an assist and Gabriel Landeskog added an empty-netter for the Avalanche, who scored three times on the power play.
NHL・10 DAYS AGO
MLive

In an intriguing matchup in a light schedule for the NHL on Wednesday night, as two teams, who have been underwhelming according to some, meet up in British Columbia, as the Colorado Avalanche get set to take on the Vancouver Canucks. Many were picking the Avs to be definitive Stanley...
NHL・11 DAYS AGO

The third period swung the Colorado Avalanche’s way Wednesday. Cale Makar scored the team’s third power-play goal of the night, Nazem Kadri added his third point of the evening and the Avalanche (7-5-1) won their third straight. Makar played catch with Devon Toews before ripping one in stick side for...
NHL・10 DAYS AGO
the-rink.com

Wednesday night marked the first time that the Chicago Blackhawks and Seattle Kraken squared off. Seattle had their home crowd fired up and ready to go, but they ran into the same problems they have dealt with all season long: Facing a hot goalie and goalie problems of their own. The Blackhawks, on the other hand, took advantage of some defensive miscues and sub-optimal goaltending to win their fourth game in a row to begin the Derek King era.
NHL・10 DAYS AGO
FanSided

It is officially a four-game win streak for the Chicago Blackhawks. After dropping 11 of their first 12 games, it is finally looking up. They have beaten some weaker opponents but it is hard to say who is actually weaker than a team like this. What we do know, is that their 4-2 victory over the Seattle Kraken was much needed.
NHL・9 DAYS AGO
hawaiitelegraph.com

Connor McDavid scored and added an assist to extend his point streak to 17 games, and the Edmonton Oilers used a four-goal first period to beat the visiting Chicago Blackhawks 5-2 on Saturday night. McDavid, with at least one point in every game and 32 points overall, waited all of...
NHL・7 DAYS AGO

The Colorado Avalanche (7-5-1) visit the Seattle Kraken (4-11-1) Friday at Climate Pledge Arena. Puck drop is scheduled for 10 p.m. ET. Below, we look at the Avalanche vs. Kraken odds and lines, and make our expert NHL picks, predictions and bets. The Avalanche ride a three-game win streak into...
NHL・8 DAYS AGO
arcamax.com

Marc-André Fleury makes 40 saves in the Chicago Blackhawks' 1st shutout of the season, a 1-0 victory over the Vancouver Canucks

Brandon Hagel’s goal in the third period gave the Chicago Blackhawks enough offense for a 1-0 win over the Vancouver Canucks on Sunday at Rogers Arena, but it was Marc-André Fleury who stole the show, giving the Hawks their first shutout of the season. Fleury made 40 saves and battled...
NHL・7 DAYS AGO
kingstonthisweek.com

In-season coaching changes often breed early success because the new sheriff in town has a different voice, also some different ideas, so it wasn’t surprising that the Chicago Blackhawks packed their gear and four straight wins under Derek King for their road trip to Rogers Place Saturday night. Story continues...
NHL・7 DAYS AGO
FanSided

The Chicago Blackhawks are on a bit of a roll. The Edmonton Oilers slowed them down a bit on Saturday night to end their four-game winning streak. That was an example of Connor McDavid and Leon Draisaitl showing their true powers though as they knew they could bounce back the next night against the Vancouver Canucks.
NHL・6 DAYS AGO

VANCOUVER, British Columbia — Every time a puck hits the post behind Marc-Andre Fleury, he later rubs the post to thank it. So when at least three shots clanked off the iron Sunday — helping Fleury earn his first Blackhawks shutout in a 1-0 win over the Canucks — he wanted to give extra thanks.
NHL・6 DAYS AGO
thednvr.com

The Colorado Avalanche played an extremely wacky game against the Ottawa Senators. Twelve goals and an Avalanche W that may be one better of forgotten. Join Rudo, Blais, and Jesse as they break it down. DON’T FORGET TO SUBSCRIBE TO THE POD! iTunes link– Stitcher Link– Pocket Casts Link– Spotify...
NHL・5 DAYS AGO
Sportsnet.ca

CALGARY -- On a night Calgary didn't have its 'A' game, Milan Lucic and the club's veteran fourth line delivered a pair of timely goals. Lucic scored a key one early and Trevor Lewis added an empty netter as the Flames took a 5-2 victory over the Chicago Blackhawks on Tuesday.
NHL・4 DAYS AGO
Sportsnaut

Alex DeBrincat scored with 3:33 remaining in overtime as the Chicago Blackhawks rallied to defeat the visiting St. Louis Blues
NHL・1 DAY AGO
thednvr.com

It was a near picture-perfect response from the Colorado Avalanche after their lackluster performance last night in Dallas, as the Avs knocked off old friend Matt Duchene and the Nashville Predators 6-2 Saturday night back at home. If you tuned into the DNVR Avalanche Postgame Show after the Avs lost 3-1 in Dallas, you heard a show filled with plenty…
NHL・9 HOURS AGO
milehighhockey.com

After a disappointing showing in Dallas the night prior the Colorado Avalanche put in a much better effort headlined by a couple special performances in the second night of a back-to-back and handled the Nashville Predators in a 6-2 final score. The Game. It didn’t take long for the Avalanche...
NHL・9 HOURS AGO
thednvr.com

The Colorado Avalanche bounce back with a victory against the Nashville Predators. Mikko Rantanen had a hat trick as he dominated the game. Cale Makar had a casual three-point game and helped the Avalanche win. There was a huge brawl where Gabriel Landeskog came out victorious against Elkhiom. All that and much more in the postgame show with Rudo and Balis.
NHL・8 HOURS AGO