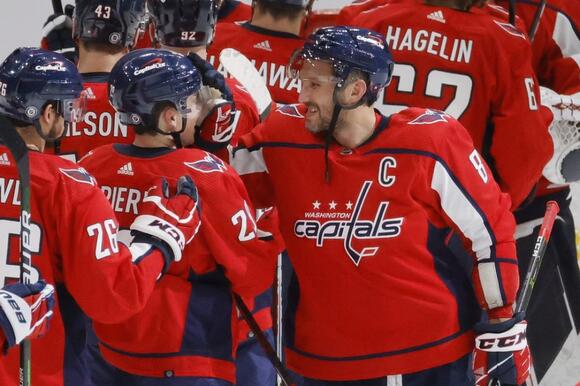 Alex Ovechkin scored twice in the third period to move into sole possession of fifth plac e on the NHL’s all-time goal list Wednesday night, leading the Washington Capitals to a 5-1 win over the visiting New York Rangers in the season opener for both teams.

Ovechkin, who signed a five-year contract with the Capitals in July, is nine goals away from tying Brett Hull for fourth place and 162 goals behind the all-time leader, Wayne Gretzky.

The win also produced a milestone for Capitals coach Peter Laviolette. He earned his 674th win behind the bench, breaking the mark he shared with John Tortorella for the most wins by an American-born coach.

William Nylander scored the go-ahead goal early in the third period and Toronto defeated visiting Montreal in the season opener for both teams.

Nylander’s decisive shot came from the right circle at 1:06 of the third period. Morgan Rielly and Mitchell Marner had the assists. Pierre Engvall scored a power-play goal for Toronto after Montreal’s Jonathan Drouin produced the game’s first tally.

Maple Leafs goalie Jack Campbell made 31 saves while the Canadiens’ Jake Allen stopped 28 shots. The Canadiens eliminated the Maple Leafs with a seven-game victory in the first round of the playoffs last season.

Gabriel Landeskog, Bowen Byram and Nazem Kadri each had a goal and an assist, Jack Johnson also scored, and Colorado beat Chicago in Denver.

Colorado scored the first three goals in a game that was the season opener for both teams. Darcy Kuemper made 32 saves for Colorado, which played without head coach Jared Bednar and center Nathan MacKinnon, both away from the team due to COVID-19 protocols.

Kyle Turris scored the winning goal in the fifth round of the shootout to give host Edmonton a victory over Vancouver in both teams’ season opener.

Jesse Puljujarvi and Zach Hyman also tallied for the Oilers, who received a 36-save performance from goaltender Mike Smith, on top of stopping four of five opponents in the shootout. Oilers captain Connor McDavid collected two assists.

The Canucks erased a 2-0 deficit with third-period goals from Oliver Ekman-Larsson and Quinn Hughes. Vancouver goalie Thatcher Demko made 32 saves.

Mason McTavish had a goal and an assist in his NHL debut, John Gibson made 33 saves and Anaheim beat visiting Winnipeg in the season opener for both teams.

Kevin Shattenkirk, Adam Henrique and Rickard Rakell added goals for the Ducks, whose positive start comes after a season in which they had the second-lowest points total in the NHL, 43. The Ducks killed off all five Jets power plays.

McTavish not only became the second-youngest Ducks player to make his debut at 18 years and 256 days, but he became the youngest to score a goal for Anaheim. Kyle Connor scored a goal for the Jets, and Connor Hellebuyck stopped 18 shots.

The New York Rangers are scheduled to play the New York Islanders tomorrow at the UBS Arena. At this time, the game is still on but with Zdeno Chara now being the 7th Islanders player to be added to the COVID protocol list there’s concerns. When head coach Gerard Gallant...
NHL・4 DAYS AGO
Las Vegas Herald

Evgenii Dadonov had two goals and an assist as the Vegas Golden Knights scored four times in the third period to pull away for a 7-4 victory over the Vancouver Canucks on Saturday night in Las Vegas. Jonathan Marchessault scored twice, Jake Leschyshyn and Reilly Smith each had a goal...
NHL・14 DAYS AGO
Yardbarker

Alex Ovechkin moved into fourth place all by himself on the NHL all-time goals list, passing Brett Hull. His first period tally evened the score as the visiting Washington Capitals defeated the Columbus Blue Jackets 4-3 on Friday night. “It means a lot,” Ovechkin said after the game. “When you...
NHL・15 DAYS AGO
reviewjournal.com

Jonathan Marchessault hit his milestone in style. The Golden Knights left wing didn’t just score any ol’ goal for his 100th with the franchise. He scored skating down the right faceoff circle in the third period of a tie game with a lightning-quick wrist shot that beat goaltender Thatcher Demko far-side.
NHL・14 DAYS AGO

Trevor Zegras’ second goal of the game came with 45.1 seconds remaining in overtime, and the host Anaheim Ducks posted their eighth straight victory and the 1,000th in franchise history, a 3-2 win over the Washington Capitals on Tuesday night. It was one of two milestones for the Ducks on...
NHL・11 DAYS AGO
Kansas City Star

Defenseman Ryan Lindgren scored the dramatic, tiebreaking goal with one second remaining to lift the New York Rangers over the visiting Buffalo Sabres 5-4 on Sunday night in a game that featured a six-goal second period. Lindgren's dramatic goal gave the Rangers a fifth straight home win on a night...
NHL・6 DAYS AGO
Tacoma News Tribune

Defenseman Ryan Lindgren barely beat the third-period buzzer to lift the New York Rangers to a 5-4 victory over the Buffalo Sabres on Sunday night. Lindgren’s heroics came after the teams scored three goals each in a wild second period, including four goals in an 82-second span. Chris Kreider, Jacob...
NHL・6 DAYS AGO
NBC Sports

Sharangovich was one of the young players in New Jersey a year ago that gave their fans and the organization a lot of reason for optimism. It has been a slow start for the second-year forward this season as he entered Saturday’s game with zero goals in his first 13 games this season. He scored 16 in 54 games a year ago as a rookie.
NHL・7 DAYS AGO

SEATTLE – Alex Ovechkin scored his 745th career goal in Washington’s 5-2 loss to the Seattle Kraken. With the third period tally, the Caps forward notched his 15th goal of the season to go along with 15 assists for 30 total points. Insidehockey.com videotaped Ovechkin’s pre-game routine and his playful...
NHL・5 DAYS AGO
WEEI Sports Radio

It's not just goals, Alex Ovechkin is racking up assists too

As Alex Ovechkin keeps racking up goals, a lot of focus around him has been on his climb up the all-time goals list. As he chases Wayne Gretzky's goal record, a record that has long been considered impossible, you could excuse Ovechkin for shooting at every conceivable opportunity. Yet, through 20 games, Ovechkin has been racking up even more assists than goals. Wednesday's 6-3 win over the Montreal Canadiens is a good example. Ovechkin recorded three points in the game, all assists.
NHL・3 DAYS AGO
Yardbarker

It seemed like a pretty comical moment towards the end of the New York Rangers 5-2 win over the Boston Bruins. Artemi Panarin and Bruins super-pest Brad Marchand were jawing at each other. The confrontation ended with Panarin throwing his glove at Marchand. ABC commentator, AJ Mleczko was in between the benches when the altercation took place. “I don’t mean to laugh,” she said. “It is heated and intense.”
NHL・1 DAY AGO

Connor McDavid, Alex Ovechkin providing plenty to be thankful for in 2021-22 NHL season

The weather is getting chillier (well, some days, at least) and the action inside the rink is heating up. It's a smidge over a month into the 2021-22 NHL season and things have been anything but quiet across the league's 32 teams. Jack Eichel was finally able to leave Western New York and get the surgery he desperately needed to continue his NHL career. Alex Ovechkin continues his ascension as the game's greatest all-time scorer. And teams that were supposed to be on top are on the bottom and those expected to be in the basement are living in the penthouse.
NHL・2 DAYS AGO
NBC Washington

Alex Ovechkin keeps scoring, inching closer to NHL records originally appeared on NBC Sports Washington. As Capitals defenseman Dennis Cholowski greeted Alex Ovechkin after the captain’s third goal of the night, it seemed surreal to Cholowski that he’d even get to bask in such a moment. In a 4-3 win...
NHL・1 DAY AGO
floridahockeynow.com

The Florida Panthers have been struggling on the road for the past little bit and Friday’s 4-3 loss to the Washington Capitals was their fifth consecutive defeat away from Sunrise. Good thing they are on their way back, eh?. The Panthers saw Alex Ovechkin put up three more goals —...
NHL・1 DAY AGO
NHL

Any and every Caps game at home or on the road these days offers the opportunity to witness history in the making, as Alex Ovechkin reminded us all once again in Washington's traditional Black Friday home game. The Caps captain racked up the 28th hat trick of his NHL career on Friday, helping to push the Caps past the Florida Panthers, 4-3.
NHL・1 DAY AGO