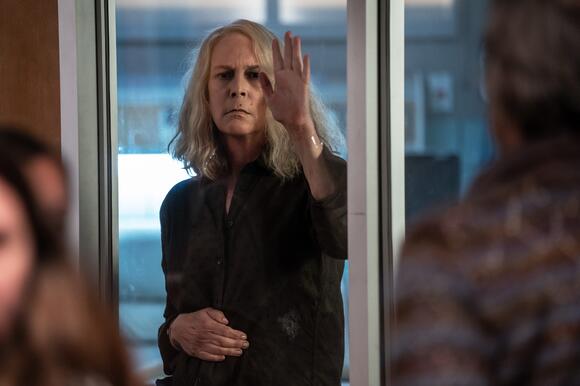 Forty years after the first time, much to her chagrin, Jamie Lee Curtis is back in another “Halloween” movie wearing another piece of emergency-room fashion.

It’s admittedly not the greatest look, no matter if you're a legendary horror heroine or a muscular action-movie star. “You put Arnold Schwarzenegger in a hospital gown, he looks like a wimp!” Curtis says with a laugh. “They by nature make you feel vulnerable. It's just hard to be a warrior in a hospital gown.”

The new horror sequel “Halloween Kills” (in theaters and streaming on Peacock now) definitely puts Curtis’ iconic “final girl” Laurie Strode in a medical predicament. The last film, 2018’s hit “ Halloween ,” found Laurie ready after decades of preparation for another throwdown with masked psycho Michael Myers 40 years after their first meeting (see John Carpenter’s original 1978 “Halloween”). With daughter Karen (Judy Greer) and granddaughter Allyson (Andi Matichak) by her side, Laurie trapped Michael in her burning house and then she escapes, bleeding out from a nasty stab wound to the abdomen in the back of a truck.

“I think Laurie is really willing to die in that moment,” Curtis, 62, says of where the last movie ends and “Kills” begins. “She has done the things she needed to do. She finished him and protected her daughter and granddaughter, but they also came together as a family that had been split apart by him. In a way, I feel like she had come full circle. So she now needs to be protected simply because she's wounded.”

Laurie’s heroism stirs up a vigilante mob in Haddonfield to go after Michael, who of course didn’t actually meet a blazing end and is now on yet another killing spree. Meanwhile, Laurie deals with unexpected chaos at the hospital amid major surgery that keeps her bedridden and out of the main fight. “It shows the real strength of character,” says co-writer/director David Gordon Green, who was inspired by an unfilmed moment from the original script of the 1978 movie that points to Laurie's loneliness. And her strength comes from that, "which is a very valuable thing to consider on her trajectory and the way that she is able to project strong emotion to those that touch her.”

For "Halloween Kills," Curtis recalls filming the “bizarre” operation scene featuring “bona fide surgeons” and not actors doing their thing on a prosthetic stomach piece: “I'm listening to surgeons talk the way surgeons talk on some level while they're cutting me open. It was interesting and wacky.”

This sequel went a lot better for Curtis than 1981’s “Halloween II,” where Laurie was also recuperating in a hospital after a Myers attack. With a wry grin and dry wit, she recounts her most infamous moment from that film, when nightgown-clad Laurie falls out of a car door in a hospital parking lot and onto the pavement, bruising “the (expletive) out of my left hip,” and then crawls on the ground, breaking her nails on the asphalt, and gets to the doors where she squeaks out a “help!” “It makes no freaking sense,” Curtis says. “The help's there and she can't scream. That makes me kind of crazy.”

But the actress, known for her off-screen activism and philanthropy, turns thoughtful when asked if she's bestowed her own passion and fierceness into her children – daughters Annie, 34, and Ruby, 25 – similar to Laurie's influence on her family.

“Wow,” Curtis says. “All I can say is I hope so. None of us want our kids to be tested. We want them to be fine and have happy lives. I just hope my kids, when challenged (with adversity), will face it with I hope intelligence, courage and integrity.”

She pauses. “That was very heavy. It felt almost like an Oprah moment!”

Curtis has become as much a face of the “Halloween” franchise as Michael’s masked visage. Greer recalls showing up in Charleston, South Carolina, for rehearsals on the 2018 film, which repositioned the franchise to highlight the effects of trauma. “I was so taken with how important the story was to Jamie and how crucial it was for her to be able to be in this movie,” Greer says.

Anthony Michael Hall, Curtis’ newest co-star in "Halloween Kills," calls her “a super-cool person, very much like the earth mama. She's just so personable and very loving and has great energy and very generous spirit. Not everybody's like that. But when it's so natural and effortless, it makes you take note.”

Curtis will next film “Halloween Ends” (expected next year) though who knows if it’ll be Laurie’s end. “If I’ve learned one thing in 43 years, it’s you just never say goodbye,” she says. “I'll say goodbye when I'm dead.”

Could Jamie Lee Curtis Have Starred In ‘The Exorcist’?

The Queen of Scream could have been a real head-turner before she met Michael Myers. It’s impossible to think of film legend Jamie Lee Curtis without seeing her as Laurie Strode in the iconic Halloween franchise. But, just for a moment, imagine a very young Curtis in a very different, but equally memorable, horror part–that of Regan MacNeil in 1973’s The Exorcist.
MOVIES・11 DAYS AGO
arcamax.com

Jamie Lee Curtis: Halloween is a classic due to the storytelling

Jamie Lee Curtis thinks 'Halloween' is one of the most successful horror franchises of all time because the movies have great "storytelling". The 62-year-old actress - who first played Laurie Strode in John Carpenter's 1978 original - believes that, unlike other scary movies she refused to name, the slasher films do not rely on trickery to scare the audience.
MOVIES・6 DAYS AGO
Cosmopolitan

So over the weekend, Jamie Lee Curtis hopped on Instagram and dropped a photo of Jake Gyllenhaal and his sister, Maggie. Which, cute...but also a choice! Mostly because the internet was extremely busy roasting Jake amid the release of Taylor Swift’s 10-minute version of “All Too Well,” not to mention extremely busy asking Maggie where Taylor’s scarf is.
CELEBRITIES・13 DAYS AGO
Us Weekly

Going method. In Will Smith’s forthcoming Will memoir, he’s getting candid about his past and current relationships. During the 53-year-old King Richard star’s first marriage to ex-wife Sheree Zampino — with whom he shares 28-year-old son Trey — the Pennsylvania native claimed he “fell in love” with Stockard Channing while they worked together on Six Degrees of Separation in 1993.
CELEBRITIES・25 DAYS AGO

Two of Arnold Schwarzenegger’s five children have followed in his acting footsteps – Patrick Schwarzenegger and Joseph Baena. And five years ago, Baena recreated one of his father’s most memorable scenes from 1991’s Terminator 2: Judgement Day. Now on the set of his new movie, Baena is once again channeling his famous father.
MOVIES・2 DAYS AGO
epicstream.com

It seems like almost every actor in Hollywood wants to jump in on the Marvel bandwagon and with Phase Four slowly taking shape, Marvel Studios will most certainly be introducing new characters to the fold which of course means that it's only a matter of time before our favorite Hollywood A-listers make their way to the billion-dollar franchise.
MOVIES・27 DAYS AGO
Outsider.com

‘Blue Bloods’: Vanessa Ray’s Perfect Explanation on Why Jamie and Eddie Haven’t Had a Kid Yet

Fans of CBS police drama Blue Bloods know that NYPD officers Jamie Reagan and Eddie Janko-Reagan are married. But no kid yet? Why?. Outsiders, let’s go ask someone who would know. Vanessa Ray, who plays Eddie, talked about this in a 2020 interview with Hollywood Life. “They are crazy about...
TV SERIES・2 DAYS AGO
Hello Magazine

Julia Roberts is on cloud nine over the Thanksgiving weekend, not only enjoying the holiday but also celebrating a special family occasion. The actress shared a throwback picture on her social media of herself with her twins, Hazel and Phinnaeus, from when they were just babies. The two looked as...
FAMILY RELATIONSHIPS・5 HOURS AGO

Tom Hanks & Rita Wilson Have Dinner With Son Truman, 25, — Photo Of Their Rare Outing Together

It’s ‘The Truman Show’ – starring Tom Hank’s son. Days before Thanksgiving, the ‘Finch’ star joined wife Rita Wilson and their son, Tuman Hanks, for a rare public outing in Malibu. While Chet Hanks is often the one hogging the spotlight – and often, for all the wrong reasons –...
MALIBU, CA・4 DAYS AGO
Life and Style Weekly

Jamie Lee Curtis is being told it is “not the right time” to share a gushing post about her godson, Jake Gyllenhaal, after Taylor Swift‘s new 10-minute version of “All Too Well,” widely believed to be about him allegedly dumping the singer in 2010. The song has new life thanks to the album release of Red (Taylor’s Version) on November 12, 2021, which is an LP bathed in her heartbreak of that time.
CELEBRITIES・12 DAYS AGO
Outsider.com

“Law & Order: SVU” star Mariska Hargitay said Robin Williams was by far her favorite guest star over the years. Over 23 seasons and 504 episodes, Hargitay admits that she felt like being next to Williams was being “in the presence of true greatness.” The episode titled “Authority” ran on April 29, 2008. She talked about Williams to TVInsider back in 2018.
CELEBRITIES・23 HOURS AGO
nbcboston.com

John Krasinski Put His Foot Down Over This Surprising ‘Office' Storyline

Fans of "The Office" know the love story between Jim and Pam made us all believe in the concept of happily ever after. Now imagine if Jim had totally blown it all — by cheating on Pam. That was a storyline the show's show’s creator, Greg Daniels, proposed, but actor John Krasinski, who played Jim, refused to film the scene.
TV & VIDEOS・9 DAYS AGO

The CW this Sunday night commemorated the 50th anniversary of The Homecoming: A Christmas Story — the 1971 TV-movie that wound up siring The Waltons — with a remake. But did it evoke enough folksy charm? As with the source material, and set in 1933, The CW’s The Waltons’ Homecoming found the titular family readying for Christmas but also waiting… and waiting… for patriarch John Sr. (played by Ben Lawson) to come home for the holiday from his far-away job. (John’s already long bus ride was further slowed by a brewing snow storm, and is eventually derailed when the bus skids...
MOVIES・28 MINUTES AGO
The Hollywood Reporter

[This story contains spoilers for Dexter: New Blood, episode four, “H Is for Hero.”] This week’s Dexter: New Blood took on questions fans of Showtime’s serial killer series have been pondering for 12 years. In December 2009, Dexter‘s season four finale shocked audiences when the Trinity Killer (John Lithgow) murdered Rita Morgan (Julie Benz), leaving her and Dexter’s (Michael C. Hall) infant son, Harrison, in a pool of his mother’s blood. Both Dexter and the audience have wondered ever since if Harrison might have Dexter’s compulsion to kill. Or, as crime podcaster Molly Park (Jamie Chung) so indelicately asks in this week’s...
TV SERIES・1 HOUR AGO
TVLine

Warning: This post contains True Story spoilers. Proceed at your own risk. Netflix’s hit limited series True Story does a great job unpacking the rivalrous and damaged relationship between two very different brothers as they attempt to cover up a murder or two. But when it comes to women, let’s just say there is a dearth of variety. The most fully realized woman on the show is Billie, played by Space Force‘s Tawny Newsome. She writes jokes for Kid (Kevin Hart), but he takes her for granted until almost losing her to Will Ferrell. Billie also has a clandestine romantic relationship with...
TV SERIES・7 HOURS AGO
The Morning Hustle