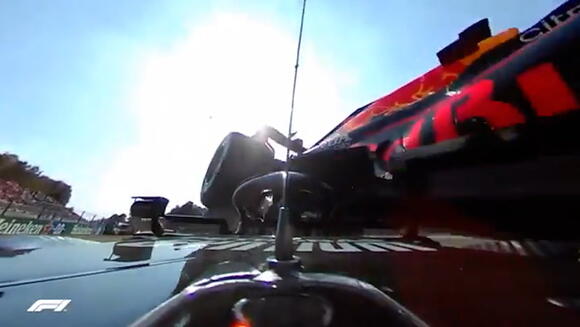 Red Bull team principal Christian Horner has said a second engine penalty of the season for Max Verstappen cannot be ruled out as the title race looks set to go down to the wire.

Verstappen leads Mercedes’ Lewis Hamilton by six points at the top of the drivers’ standings with six races left this season, and the Dutchman has already used a fourth engine this season – one more than is permitted before a penalty is incurred.

Hamilton’s use of a fourth engine this year saw him serve a 10-place grid penalty at last weekend’s Turkish Grand Prix, costing him pole position.

The defending champion went on to finish fifth in Istanbul , surrendering the championship lead to Verstappen, who came second. Both Mercedes and Red Bull are aware that a ‘did not finish’ could end their respective driver’s title hopes .

As such, Horner has admitted that a second engine penalty for Verstappen – following the one served at the Russian GP – is not totally off the cards.

“I think in normal circumstances we should be able to [get by] with the penalty that we took in Sochi,” Horner said, per GP Fans .

“So yeah, that gives us three engines still alive in our pool. We are not down to just one engine.

“So it looks like, theoretically, we should be able to get to the end of the year. [But] never say never.”

While Verstappen finished second in Turkey, teammate Sergio Perez came third to round out the podium as Hamilton’s teammate Valtteri Bottas claimed his first win of the season.

“To take the points we did in both the drivers’ and constructors’, the engineering team did a great job when we were a bit out of the window on Friday,” Horner said.

“Arguably it has been Mercedes’ strongest circuit we have seen so far this season, so to have two cars on the podium and retake the lead in the drivers’ championship was a positive day for us.”

Red Bull boss Helmut Marko seems terrified of Lewis Hamilton’s engine advantage despite Max Verstappen’s lead in the F1 driver standings. After winning the Brazilian Grand Prix starting at P10, Hamilton completed a successful drive, but it is also a fact that he had a new engine. Via Express UK.
MOTORSPORTS・9 DAYS AGO
ESPN

In the crucial sole practice session before qualifying for the third and final F1 Sprint of the season on Saturday, it wasn't looking positive for Hamilton early on with his new Mercedes engine confirmed - which brings a five-place grid penalty for Sunday's race - and setup issues plaguing his performance.
MOTORSPORTS・14 DAYS AGO
SkySports

While Hamilton does not take an official pole for his one-lap efforts, his 0.438s advantage over Verstappen was his biggest of the season in a dry shootout and he will head the field for Saturday's 24-lap Sprint before taking his five-place grid penalty for Sunday's showpiece race. F1 Sprint: Hamilton,...
MOTORSPORTS・14 DAYS AGO

An animated Wolff clenched his fists in celebration and then pointed in the direction of the world-feed camera positioned in Mercedes' garage when Hamilton crossed the line to claim a crucial win ahead of title rival Max Verstappen from 10th on the grid, at the end of dramatic weekend of investigations and penalties at Interlagos.
MOTORSPORTS・12 DAYS AGO
racingnews365.com

Christian Horner says Red Bull won't change their approach in Brazil despite the news that Lewis Hamilton will serve a five-place grid penalty in Sunday's race. Red Bull Team Principal Christian Horner insists that it's business as usual for the squad this weekend in Brazil, despite Lewis Hamilton serving a five-place grid penalty.
MOTORSPORTS・14 DAYS AGO
firstsportz.com

It seemed like the Championship might be eluded from Lewis Hamilton entering the Brazilian Grand Prix, but session after session the reigning world champion showed signs of improvements and courage even though he had blows on every day before the race. Starting the race on Sunday from P10, the 36-years-old Brit has managed to outrace Red Bull’s Dutchman to finally win a race starting from P10, for the first time in his career.
MOTORSPORTS・12 DAYS AGO
Autoweek.com

Mercedes officials want F1 to take another look at the alleged blocking move that Max Verstappen put on Lewis Hamilton midway through the race in Brazil. The call for Right of Review comes after new Verstappen in-car video evidence has surfaced. It is the third time this season that a...
MERCEDES, TX・10 DAYS AGO

Martin Brundle believes that the best way for Lewis Hamilton to beat Max Verstappen to the Formula 1 Drivers’ Championship could be for the Briton to take another five-place grid penalty at this Sunday’s Qatar Grand Prix.The seven-time world champion did exactly that at the Brazilian Grand Prix last time out, storming through from tenth on the grid to pass Verstappen out front and ultimately take one of the finest victories of his stellar career.Mercedes had opted to install a brand new internal combustion engine into Hamilton’s power unit for the Interlagos race, willingly incurring the starting penalty after...
MOTORSPORTS・10 DAYS AGO
buckinghamshirelive.com

Red Bull technical advisor Helmut Marko has conceded that he thinks Lewis Hamilton holds an advantage in the title race despite Max Verstappen's lead in the championship. Hamilton's sensational drive at the Sao Paulo Grand Prix saw the Mercedes ace cut Verstappen's lead to 14 points heading into the final three races of the season.
MOTORSPORTS・11 DAYS AGO
Daily Mail

Max Verstappen insists he DOESN'T 'need to look at the footage' of his Red Bull running Lewis Hamilton off track at the Sao Paulo GP... but the world champion says he has a 'different viewpoint now'

Max Verstappen insists he has not watched his incident with Formula One title rival Lewis Hamilton from the Sao Paulo Grand Prix which could yet land the Red Bull driver with a penalty. Hamilton took the chequered flag at Interlagos to close the gap in the title race to 14...
MOTORSPORTS・8 DAYS AGO
firstsportz.com

Max Verstappen and Lewis Hamilton have at each other’s throughout the 2021 Formula 1 season and have made the world championship wide open with only 3 races to go. With Mercedes having an 11-point lead in the Constructor’s Standings, it is the Dutchman who leads the seven-time world champion by 14 points. Hamilton and Verstappen have disagreed over racing rules this week after Verstappen escaped a penalty for a defensive move in last week’s race in Brazil.
MERCEDES, TX・5 DAYS AGO

Max Verstappen: I never get presents from F1's race stewards

Max Verstappen said he was not surprised to be handed a grid penalty at the Qatar Grand Prix as he "never gets presents" from F1's race stewards. Verstappen qualified second in Qatar but dropped five places down the grid for failing to slow for yellow flags at the end of qualifying.
MOTORSPORTS・5 DAYS AGO
SkySports

Horner was summoned to stewards after Sunday's race, where Verstappen recovered second place behind title rival Lewis Hamilton, to explain comments he made after the five-place grid drop had been issued earlier on Sunday for breaching rules when passing double-waved yellow flags. Speaking to Sky Sports F1 before the race,...
MOTORSPORTS・5 DAYS AGO
firstsportz.com

Max Verstappen and Red Bull’s Gamble Did Not Pay Off: “It was very difficult to do anything”

The end of the Qatar Grand Prix now indicates that the 2021 Formula 1 season is soon coming to an end, with only two races more to go. The Qatar GP ended with a successful night for Lewis Hamilton, who took first place through a dominant win. Max Verstappen came in second, his pace not fast enough to catch up to his rival. The podium to remember however was for Fernando Alonso, who took a spot at the top after 7 long years.
MOTORSPORTS・4 DAYS AGO
ClutchPoints

Red Bull Racing drops a truth bomb on how their star, Max Verstappen, in his bid to win an F1 championship against Mercedes’ Lewis Hamilton. Team advisor Helmut Marko shed some light on Verstappen’s slim lead with just two races to go, providing a truthful but crucial judgment on how the dutchman can win his first title.
MOTORSPORTS・3 DAYS AGO
The Independent

Martin Brundle has criticised the FIA’s decision to penalise Max Vertsappen for failing to obey yellow flags during qualifying at the Qatar Grand Prix. Red Bull driver Verstappen and Mercedes’ Valtteri Bottas were hit with five- and three-place grid penalties respectively after failing to slow down under yellow flags. It meant Verstappen started seventh on the grid, and although he fought back to finish second, the penalty denied the Dutch driver the chance to battle with title rival Lewis Hamilton going into the first corner. Bottas meanwhile had a day to forget as a puncture followed by a retirement saw...
MOTORSPORTS・2 DAYS AGO
The Independent

Lewis Hamilton is chasing down Max Verstappen at the top of the Formula 1 standings, just eight points behind after winning the Qatar Grand Prix - his second straight victory following a huge performance in Brazil.Just over a week remains until the next race, with the Saudi Arabia Grand Prix being the penultimate one of the season - then it’s off to Yas Marina in the United Arab Emirates. The long straights will unquestionably favour the Mercedes cars over those of Red Bull, especially with Toto Wolff revealing Hamilton will get his newest “spicy” engine back in the car...
MOTORSPORTS・22 HOURS AGO