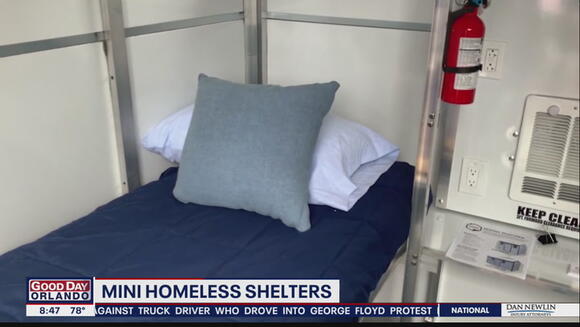 A Florida woman has been arrested and charged with child abandonment after allegedly leaving her two-year-old daughter with two strangers at a hospital and not returning.

Carolina Vizcarra, 33, was accused of leaving her two-year-old daughter with two strangers – one of whom happened to be an off-duty police officer – at Miami ’s Mercy Hospital, saying she was going to use the restroom. Police say she did not return.

Ms Vizcarra was arrested and later charged with one count of child abandonment, after detectives received a call saying a woman was looking for a baby girl. The caller provided a description of the girl that matched the one of the abandoned two-year-old.

“It’s not like I just left her,” she later told the police, according to an arrest report. “It’s a hospital and I was worried for her. I was thinking about sleeping on the streets, but not her.”

Ms Vizcarra was later released from jail under a special programme that helps low-income, non-violent offenders. At a bond court hearing, she described being homeless and a victim of domestic violence.

“I have lived in Miami for three years and I am homeless. I have family in California and I do not work. I do not have a work permit,” Ms Vizcarra was quoted as saying by CBS Miami.

The Miami police department had earlier tweeted the picture of the girl in question, asking for help in tracing her family members, adding she was “in good health”.

The child later was taken in by the Florida Department of Children and Families.

The judge in the bond court said Ms Vizcarra should not have any contact with her daughter, but noted that she could be allowed supervised visits to the child under a separate case in dependency court.

Police continue their attempts to trace the girl’s family members, and it remains unclear who will eventually gain custody of the girl.

“We were able to get to the mom after she went to the hospital many hours later claiming that she left her daughter there,” police spokeswoman Kaina Fallat told reporters.

Police said Ms Vizcarra was lucky the stranger happened to be a police officer who was in plainclothes at that time.

“She hands off the child to this unknown man. Luckily he was a police officer and what was going through his mind was he went into police mode,” Ms Fallat said.

She shouldn't be jailed have mercy she is homeless. I can't begin to imagine what she and so many others are going through. I hope she can get help for her and her daughter 🙏🏾

isnt that what she's supposed to do??? emergency service places are safe haven in which you can surrender children to the state, this lady did abandon the kid, she just essentially put it up for adoption

This is so sad and ridiculous she’s begging for help to go to this extreme and then you turn around and arrest her,at least she didn’t harm herself or the child hopefully someone in the legal system will get her and her baby the help they need and a place to live and a home to call their own

A teenager was arrested in India after police say he beheaded his 19-year-old sister as his mother allegedly held her legs, CNN reports. Police in Vaijapur, Maharashtra told the outlet that the unnamed woman’s husband said they married against the wishes of her family and that she was two months pregnant with their child. At the time, the woman was living with her husband and she invited her mother and brother—who have also not been named by authorities—into her home for tea when they came to visit her Sunday.
PUBLIC SAFETY・4 HOURS AGO
KTVU FOX 2

A father is in shock after a possibly homeless woman with mental health issues is accused of trying to kidnap his and his nanny's child. Police tell him it was not her first kidnapping attempt and have made an arrest.
MENTAL HEALTH・4 DAYS AGO
People

'Unimaginable What She Went Through': After Body of Fla. Mom Is Found in Bay, Man Is Arrested

A Florida man is accused of murdering a woman who vanished before her dismembered body was found in a bay earlier this month. Robert Kessler has been charged with second-degree murder and abuse of a dead body in the death of Stephanie Crone-Overholts, Interim Chief Ruben Delgado of the Tampa Police Department announced at a news conference last Wednesday.
FLORIDA STATE・8 DAYS AGO
International Business Times

A 35-year-old man in Delta State, Nigeria, has been arrested for raping two minor sisters and impregnating one of them, authorities said. The suspect was identified as Jude Nduka, a resident of Obi Onuwe Street behind Kowen Plaza, Asaba. He is accused of raping a 16-year-old girl and her 13-year-old sister, whose names were not disclosed in a police release obtained by Sahara Reporters.
PUBLIC SAFETY・23 DAYS AGO

Authorities in Jacksonville, Fla., have arrested a man accused of torturing and murdering a 30-year-old mother in November. According to a police report obtained by PEOPLE, investigators allege Chelsea Nicole Thompson was killed by Henry Lannon II, 37. The Jacksonville County Sheriff's Office was summoned to a hospital on Nov....
FLORIDA STATE・1 DAY AGO
Insider

Lateche Norris, who was found safe after she was reported missing, said she and her boyfriend were homeless in California

Lateche Norris, a 20-year-old from Indiana, was found safe in California after being missing for a month. Norris told CBS 8 that she and her boyfriend were living near San Diego and were homeless. Norris's father told Insider that his daughter called her mom after she came across a flyer...
CALIFORNIA STATE・6 HOURS AGO
WFLA

A Florida woman is facing charges after she allegedly left her infant alone in a crib on Thanksgiving night to go to the bar.
FLORIDA STATE・5 DAYS AGO
Newsweek

A Mexican teen was jailed last week after she ran away from her wedding into an arranged marriage that had been purchased by her neighbour.Identified as Anayeli “N” in the local press, the 14-year-old from Joyal Real village in Mexico’s Guerrero state was to marry her neighbour last Monday. Anayeli’s mother had received 200,000 pesos (£7,120) for giving her daughter’s hand in marriage.Child marriages, though illegal, are common in rural areas of Mexico. Guerrero is one of Mexico’s leading states in child marriages, as it is a largely rural area that is home to indigenous populations.Abel Barrera, director of...
PUBLIC SAFETY・1 DAY AGO
International Business Times

A disabled man in the Indian state of Uttar Pradesh, whose burnt body was found by his family on a pile of garbage last week, was smothered and stabbed to death by his friends, police said. The victim, identified as Sachin, was out partying with his friends Vivek, Ravi, Saurabh...
PUBLIC SAFETY・8 DAYS AGO
YourCentralValley.com

FRESNO, Calif. (KSEE/KGPE) – Authorities have identified a man accused of injuring his mother and stabbing her boyfriend to death in Auberry on Friday night. The Fresno County Sheriff’s Office has identified 29-year-old Bretton Begaye as the suspect in the fatal knife attack that happened around 5:00 p.m. at a home near Auberry Mission and […]
AUBERRY, CA・10 DAYS AGO
Shore News Network

Have You Seen This Woman? Andreae Lloyd Missing After Being Abducted From Homestead Home

MIAMI (CBSMiami) – “It’s hard, it’s hard. She’s the type of person who always calls her daddy because we got so much love in the family,” says Arnold Lloyd, whose daughter Andreae Lloyd went missing this morning.  Arnold Lloyd, a modest family man, told us he only wants one thing this holiday season, “Everyone knows I don’t beg for anything, but I’m begging for my daughter to come home.” The baby of his 12 children, Andreae Lloyd, never returned home from her job as a caretaker at a south Miami-Dade group home where the 27-year-old worked as a supervisor filling in on the...
HOMESTEAD, FL・49 MINUTES AGO
Daily Mail

Three men 'brandishing large amounts of money tried to BUY a young child from her mother after stopping them on a Yorkshire street', police say

Police are hunting three men who offered 'a large amount of money' to a woman to buy her daughter outside a school. The incident happened in Sheffield near Lower Meadows School at about 8.20am on Wednesday. The woman, who has not been identified, said the three men had a 'large...
PUBLIC SAFETY・5 DAYS AGO
Indy100

Moving into a new home should be a good mix of stress and excitement.All your sweat and tears throughout the arduous process culminate in the magical moment where you walk through the doors and get to call a new place your own.So you can imagine the frustration of this mother when she showed up at her new home, ready to move in, and encountered the old owners still living on the property—and refusing to leave.The eager new homeowner detailed her experience in a thread shared on Mumsnet, though it has since been deleted for privacy concerns.On the site, she...
FAMILY RELATIONSHIPS・11 DAYS AGO
Vice

When Vun Pui “Connie” Chong and her daughter, San Yan Melanie Lim, imported 25 kilograms of brown ginger tea into Australia this year, they intended to sell it at a marked-up rate. The beverage is a well-known remedy for period pain in the women’s home country of Malaysia. All going to plan, they stood to make a profit of about $90 AUD.
PUBLIC SAFETY・20 DAYS AGO
Fatim Hemraj

January 31, 1996, was a particularly frigid winter day in Bolingbrook, Illinois. Facing -20°F weather and not wanting to leave the warmth of her bed, 13-year-old Rachel Marie Mellon decided to stay home from school and rest her sore throat. Rachel’s mother, Amy, left for work early that morning; she kissed her daughter goodbye unaware it would be her last time.
53 MINUTES AGO
FOX 13 Memphis WHBQ

OXFORD, Miss. — A Mississippi mother was arrested Thursday, Dec. 2, after an autopsy revealed that her infant daughter died from Fentanyl toxicity, according to the Oxford Police Department. Oxford police said that they were called out to an apartment complex on Anchorage Rd. on Sept. 15 after an infant...
OXFORD, MS・4 DAYS AGO
fox13news.com

Tampa mother says daughter was shot for no apparent reason

A nursing student at HCC who graduated from Plant High School with a 5.0 GPA in 2018 is dead after someone shot into her car for no apparent reason. The shooter is on the run while the victim's mother searches for answers.
TAMPA, FL・3 DAYS AGO
New York Post

A Miami Beach man whose repeated romantic advances to a restaurant co-worker were rejected killed her outside her apartment, according to reports. Agustin Lucas Mariani, 20, faces second-degree murder charges for the fatal stabbing of Delfina Pan, a 28-year-old from Argentina who had refused to date him, the Miami Herald reported Friday.
FLORIDA STATE・2 DAYS AGO