Utah Jazz wrap up preseason with 124-120 win over Bucks 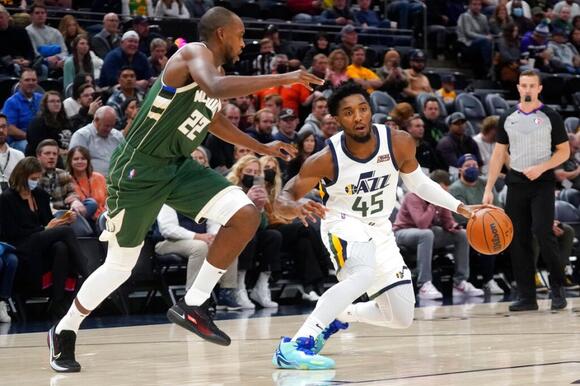 SALT LAKE CITY (ABC4 Sports) – In the last tune up game before the regular season starts, the Jazz once again showed that they are a threat.

The reigning NBA champion Milwaukee Bucks came to Vivint Arena and saw just how good this Jazz team is.

The starters only played the first hal,f with Donovan Mitchell scoring 12 points in 14 minutes. Mike Conley scored 13 points in 13 minutes. Bojan Bogdanovic lead the starters with 14 points in 16 minutes.

Jordan Clarkson came off the bench and led Utah in scoring with 18 points, 5-10 from the field.

Rookie Jared Butler had another nice showing in the preseason. He finished with 16 points and 7 assists, shooting 7-12 from the field.

With the preseason over, the Jazz start the regular season October 20th against the Oklahoma City Thunder.

The Philadelphia 76ers continue to deal with drama surrounding Ben Simmons and there does not appear to be an end in sight. Daryl Morey and the Sixers’ front-office have not changed their minds on the fact that they want an All-Star-level player for Simmons in a trade, but no team in the NBA has been willing to pay their price to this point.
NBA・18 DAYS AGO
Sportsnaut

The Utah Jazz had their best performance of the NBA Season with a blowout win over the Portland Trailblazers. The Jazz took advantage of all the Trailblazers weaknesses breaking their defense time and time again. Rudy Gobert was a dominanting defensive force. Joe Ingles thrived in the starting lineup and the Jazz have looked revitalized the last two games. David Locke, radio voice of the Utah Jazz and Jazz NBA Insider brings you the daily podcast on the Utah Jazz, Locked On Jazz, Now live each morning on You Tube — David Locke enters his ninth year as the radio play-by-play voice of the Utah Jazz, having spent the majority of his career in radio in Salt Lake City and Seattle. In the summer of 2016, Locke created the Locked on Podcast Network which has podcast daily bite sized podcasts for every NBA and NFL team. A native of Palo Alto, Calif., Locke graduated from Occidental College in Los Angeles with a degree in Political Science and Sociology. Locke and his wife have a son and a daughter.
NBA・5 DAYS AGO
FanSided

3 takeaways from Milwaukee Bucks’ thrilling win over the Detroit Pistons

The Milwaukee Bucks currently find themselves on a five-game winning streak, their longest of the 2021-22 NBA season to this point. All five victories have been at Fiserv Forum, and the Bucks capped off their homestand last night as they welcomed in the Detroit Pistons. Milwaukee was not messing around right out of the gate as they built up a double-digit lead fairly quickly and never looked back. The Bucks built up a lead that grew to as large as 24 points and would eventually secure the 114-93 victory as they picked up another victory over a Central Division opponent, something they have done more often than not. With that being said, let us take a closer look at three takeaways from the matchup.
NBA・10 DAYS AGO

Utah Jazz: 3 reasons why the Jazz must win a championship this season

Why the Utah Jazz needs to win an NBA Championship this season. A year ago, it seemed as if the stars were aligning for an NBA Finals run for the Utah Jazz. Then, injuries fell upon this team and an earlier-than-expected playoff exit is what their season was ultimately defined by.
NBA・12 DAYS AGO
NBA

Second Half Comeback Gives Jazz The Win Over Oklahoma City

Big games by Rudy Gobert and Jordan Clarkson helped Utah overcome a slow shooting night to pick up the 110-104 road victory over the Thunder. For those who don't believe Rudy Gobert is deserving of his all-NBA status, all they had to do was watch his performance Wednesday night against Oklahoma City.
NBA・11 DAYS AGO
batonrougenews.net

Fresh off big wins, Jazz and Pelicans to meet twice over weekend

The Utah Jazz and New Orleans Pelicans will get to know each other quite well this weekend. The teams play each other in a rare back-to-back at the same location, with Game 1 of their two-game set taking place Friday night in Salt Lake City and then a Saturday match.
NBA・10 DAYS AGO

Jazz pull out dicey win over the Thunder

The Utah Jazz pulled out a close win against the Oklahoma City Thunder, 110-104. Maybe it’s because Thanksgiving is tomorrow, maybe the Jazz were coasting because it was the Thunder playing without SGA. But this win doesn’t sit that well with me. The Jazz, who are in their own words playing for the Western Conference finals and more, should beat the Thunder more handily than this. It’s been a strange season so far for the Jazz, and tonight might have been the strangest win of all.
NBA・11 DAYS AGO
The Associated Press

DENVER (AP) — Giannis Antetokounmpo had 24 points and 13 rebounds, Pat Connaughton added 20 points off the bench and the Milwaukee Bucks beat the depleted Denver Nuggets 120-109 on Friday night for their sixth straight win. Antetokounmpo hit 10 of 13 shots in just 30 minutes, and the Bucks...
NBA・9 DAYS AGO
FanSided

Four studs and 1 dud from Utah Jazz win against Thunder

It feels odd that in a game where the Utah Jazz handed the potentially lottery bound Oklahoma City Thunder a narrow 6-point loss, we’d have so many players to praise, and so few to criticize. Nonetheless, anyone who watched this game would have to concede that the Jazzmen were executing their gameplan. The Thunder were simply doing the same.
NBA・10 DAYS AGO
thebirdwrites.com

Following a commanding win over the Washington Wizards, the New Orleans Pelicans (4-16) will look to keep the momentum going as they open a back-to-back two-game series in Utah against the Jazz (12-6) Friday night. The Jazz will be a tall test for the Pels as Utah is on pace to another stellar regular season, currently sitting in third place in the Western Conference.
NBA・9 DAYS AGO

Bucks 120, Nuggets 109: The Bucks use another hot start to power to their sixth straight win

Over the first month or so of the season, it was often the Milwaukee Bucks facing teams short-handed with a variety of players out injured or with illness. It contributed to a sub-.500 start and inconsistent play. Of late, that has begun to even out for the defending champs, including in Friday night’s...
NBA・9 DAYS AGO
Salt Lake Tribune

The Triple Team: Jazz ‘play with the pass’ in promising win over the Pelicans

Three thoughts on the Utah Jazz’s 127-105 win over the New Orleans Pelicans from Salt Lake Tribune Jazz beat writer Andy Larsen. Once again: the Jazz like making a statement with the game’s first play. Here was tonight’s:. Does Donovan Mitchell have the opportunity to take the pull-up three? Yeah,...
NBA・8 DAYS AGO
FanSided

The big news of the day for the Milwaukee Bucks was that they had signed DeMarcus Cousins to a non-guaranteed deal Sunday afternoon. While fans were sharing their thoughts on the move, a game between the Bucks and the Indiana Pacers was set to be played shortly after. It was a good all-around day for the Bucks as not only did they bring in a solid center to help add depth, but they also have officially won seven straight games after last night’s big victory over the Pacers.
NBA・6 DAYS AGO
kslsports.com

SALT LAKE CITY – The Utah Jazz got an easy 129-107 win over the Portland Trail Blazers behind 30 points from Donovan Mitchell and a 21 point, 16 rebound double-double from Rudy Gobert. The Jazz turned the ball over a season-low five times leading to just five fast break points...
NBA・6 DAYS AGO

At 14-7, the third-seeded Utah Jazz remain entrenched in the race for Western Conference supremacy. However, the Golden State Warriors and Phoenix Suns are both 18-3, sitting first and second in the conference. That leaves the Jazz four games behind each: a considerable deficit, but not an insurmountable one. Looking...
NBA・4 DAYS AGO
FanSided

For the second game in a row, the Utah Jazz dominated their competition. This time, that dominance came against a projected playoff team. Yesterday, we predicted a close contest for this game. Had Damian Lillard scored 17 more points than the 11 he mustered up against this elite Jazz defense, we’d at least have guessed the margin correctly. Instead, the Jazz pulled out a 129-107 win over a quality Portland Trail Blazers team.
NBA・5 DAYS AGO