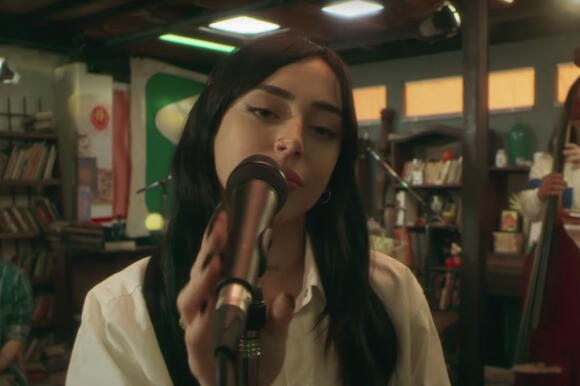 For the series, J Balvin recently performed on a barge in New York’s East River, and Camila Cabello is also slated for a future installment.

Nicki Nicole’s set took place in a room flanked by books and a camcorder was strategically placed on a stack of novels by the artist. The footage switches between the home-styled recording and pro shots, which gives the set a homey vibe.

She performed six songs — including her singles “Colocao” and “Wapo Traketero” — with a band that featured an accordionist and mandolin player. Nicole brought out an expanded string section for her engaging ballad “Parte de Mi” and she also delivered a fun freestyle. She closed with new bop “Baby.”

Ghostface Killah shared two new tracks with “Bob James Freestyle” (featuring Raekwon) and “I Got Soul Freestyle.” In teasing the tracks’ release on Twitter earlier this week, the rapper said that the songs were “a little something to help y’all enjoy the holiday weekend,” in reference to Thanksgiving. To celebrate the 25th anniversary of the Wu-Tang rapper’s solo debut, Ghostface released Ironman 25 in October, which brought a collection of rarities, remixes and radio edits to streaming services for the first time. Currently, Ghostface is on the road throughout North America with his Wu-Tang Clan collaborators GZA and Raekwon where they’re celebrating the release of their classic records Ironman, Liquid Swords, and Only Built 4 Cuban Linx. Leading up to their 3 Chambers Tour, Ghostface and Raekwon faced off on Verzuz where they not only fired verses at each other but reminisced about their history together. The 3 Chambers Tour, which kicked off October 1st in Minneapolis, is set to wrap on December 18th in Indianapolis.
CELEBRITIES・5 DAYS AGO
Rolling Stone

Hear Moses Sumney Reimagine Himself on ‘In Bloom (In the Woods)’

Moses Sumney has released a new version of his song “In Bloom.” The delicate, stripped-down track, titled “In Bloom (In the Woods),” is from the musician’s upcoming album and film Live From Blacklachia. The film, due out Dec. 10, captures a one-take performance Sumney did in the Blue Ridge Mountains of Western North Carolina. Sumney directed the film, which features performances of 14 songs, himself. The original version of “In Bloom” comes off Sumney’s 2020 album Græ. Græ marked Sumney’s second studio album and was released in two parts last year, the first in February and the second in May. It followed...
MUSIC・1 DAY AGO
Rolling Stone

Khalid shows off his nimble footwork in the new music video for “Present,” a track off his upcoming mixtape, Scenic Drive, out this Friday, Dec. 3. The new video boasts an aesthetic that feels both regal and cozy. In the clip, Khalid croons the song as a group of dancers creates an immaculate still-life tableau behind him, while later on the singer joins the group in some lively choreography that complements the classic R&B vibes of “Present.” “Present,” which was released in October, is one of nine tracks on Scenic Drive. The project will also feature contributions from Alicia Keys, Majid Jordan, Ari Lennox, Smino, Kiana Ledé, Quin, Lucky Daye, and 6lack. Scenic Drive marks Khalid’s first studio project since his 2019 album, Free Spirit. Along with prepping Scenic Drive, Khalid has released a handful of one-off singles this year, including “Otra Noche Sin Ti” with J Balvin, “Working” with Tate McRae, and “New Normal.” In November, he also teamed with Mariah Carey and Kirk Franklin for a new holiday song, “Fall in Love at Christmas.”
MUSIC・1 DAY AGO
Billboard

Camila Cabello is showing her love for the environment with a brand new tattoo. On Sunday (Nov. 7), the singer took to Instagram to share a photo of the new ink -- which is located on the back of her neck -- and shared that it's inspired by mother nature.
CELEBRITIES・24 DAYS AGO

Christina Aguilera brought the girl power to the 2021 Latin GRAMMYs. The pop star performed her new Spanish-language single, "Pa Mis Muchachas," with Becky G, Nathy Peluso and Nicki Nicole at Thursday's awards show. X-Tina kicked off the electrifying performance by showing off her impressive vocal cords with a slow and emotional rendition of her song "Somos Nada."
MUSIC・14 DAYS AGO
Rolling Stone

Becky G has dropped a music video for her cover of “Bella Ciao,” the unofficial anthem for hit Netflix series Money Heist (also known as La Casa de Papel). The video, directed by Megan Gamez, pays homage to the series. “I have always loved La Casa de Papel (Money Heist) and the way this show connected with millions of people across the world,” Becky G said in a statement. “‘Bella Ciao’ is an iconic song and marks an important moment in the series, so being asked to reimagine it and be a part of the Casa de Papel world is truly...
MUSIC・1 DAY AGO
Cheddar News

Apple Music Names The Weeknd as Global Artist of the Year

While the Recording Academy may have overlooked Abel for the Grammys despite having one of the most successful projects of 2020 in "After Hours," The Weeknd was named global artist of the year at the 2021 Apple Music Awards.
MUSIC・13 HOURS AGO

“Weird Al” Yankovic is returning to the road next year for an encore run of his Ridiculously Self-Indulgent, Ill-Advised Vanity Tour that he’s calling The Unfortunate Return of the Ridiculously Self-Indulgent, Ill-Advised Vanity Tour. It will once against focus on his lesser-known album tracks and skip over nearly all of his famous parody songs. It kicks off April 23rd, 2022 and wraps up October 29th with Yankovic’s first-ever show at New York’s Carnegie Hall. Along the way, he’s playing an incredible 133 shows. “I’ve loved doing every single incarnation of my live show, but honestly the Vanity tour is the most fun I’ve...
MUSIC・4 HOURS AGO
wwnytv.com

Late Chicago rapper Juice WRLD is the subject of new documentary Juice WRLD: Into the Abyss, which arrives via HBO and HBO Max as part of its Music Box Series on Dec. 16. In the new trailer, Juice WRLD asks an exuberant crowd to make some noise, crowd surfs at a festival, and mingles with fans as “Black & White” plays. While on the surface, the limelight looks appealing, behind the scenes he shares that things aren’t always as they appear. “When you a fan of this shit, you look at it from a certain perspective. But then when you’re in it, you see it for what it really is,” he says. “I’m still happy I can change the world, but it’s not what it look like.” Just like with his candid songs where he lays his emotions bare, he’s seen discussing his anxiety and depression and those who knew him also share their thoughts on his talent and his struggles. According to a press release, the Tommy Oliver-directed film will feature Juice WRLD in his element: performing, freestyling with friends, and collaborating with producers. It will feature never-before-seen footage, including previously unreleased tracks and interviews.
CELEBRITIES・10 HOURS AGO
Rolling Stone

South Korean pop group Aespa debuted in November 2020, but the rising stars didn’t let the pandemic get in the way of their dreams. Ever since, they’ve gone “Next Level,” becoming ambassadors for Givenchy, releasing their debut EP, Savage, in October, and performing during the Macy’s Thanksgiving Parade — the first Korean girl group to achieve that status. The quartet comprising Karina, Winter Bottom, Giselle, and Ningning share some hallmark first times with Rolling Stone. “When I heard our song on the radio, I was in a taxi,” Winter says. But then the taxi driver skipped their song. The experience, which...
DESIGNERS & COLLECTIONS・12 HOURS AGO

Olivia Rodrigo has yet to tour in support of her hit debut Sour, but she’s sprinkled in some performances throughout the year, including iHeart RadioFest and the American Music Awards. Now, the pop star will appear on an upcoming episode of Austin City Limits, premiering on Dec. 4. Rodrigo opened her set with “Brutal” and went on to play nearly every song on Sour, including “Traitor,” which you can watch above. She enchants a sea of teenagers — who sing along to every word — while Rodrigo tears through the ballad on the piano. The singer-songwriter shared the bill with Phoebe Bridgers, who took the stage after Rodrigo closed with “Good 4 U.” The episode is part of Austin City Limits‘ bonus mid-season installment of Season 47, which broadcasts on Dec. 4 on PBS. It will stream the following day at 10 a.m. ET. Rodrigo was nominated for seven Grammys last week, including Best New Artist and Album of the Year. She recently appeared on the cover of Rolling Stone alongside Alanis Morissette. Olivia Rodrigo Setlist: “Brutal” “Happier” “Jealousy, Jealousy” “Drivers License” “Traitor” “Favorite Crime” “Enough For You” “Good 4 U”
CELEBRITIES・16 HOURS AGO
Variety

Wendy Goldstein, the newly minted co-president of Republic Records and A&R executive for the Weeknd, Ariana Grande, the Jonas Brothers and now John Legend, received some strong, backhanded inspiration when she was starting out as a 19-year-old assistant in Epic Records’ A&R department. “I was constantly told, ‘Women can’t be A&R people — what’s wrong with you?’” she says now. “I was like, ‘Oh yes I can!’ And I figured it out.” Did she ever: Goldstein is among the longest-running and most successful A&Rs in the business. Over the course of a career that reaches back to that assistant job in the...
MUSIC・9 HOURS AGO
Elite Daily

Camila Cabello has a new neck tattoo, and yes, it’s as fierce as it sounds. The former Fifth Harmony member took to Instagram on Nov. 7 to show off her new ink and explain the meaning behind it. Cabello only has one other tattoo, so her neck tattoo is a ~big~ deal and fans are shook.
CELEBRITIES・24 DAYS AGO
Rolling Stone

Shawn Mendes has released new single “It’ll Be Okay.” The ballad follows the news of his split with Camila Cabello after they dated for more than two years. On the new track, he addresses the apprehension that follows the end of a relationship. “Are we gonna make it?” he wonders to open the song. “If you tell me you’re leaving, I’ll make it easy/It’ll be okay,” he sings on the chorus. “If we can’t stop the bleeding/We don’t have to fix it, we don’t have to stay/I will love you either way.” Mendes and Cabello announced their breakup in mid-November with matching...
CELEBRITIES・1 DAY AGO

Interpolations Add Instant Familiarity to New Songs by Artists Like Dua Lipa, Drake and Anitta… but Not Without a Cost

Interpolations — which incorporate elements of familiar songs into new ones — are a phenomenon that’s here to stay in many genres. Like using gonzo remakes of classic tracks in trailers, it’s a way of catching the ear of older listeners, and as long as the mashup still works for younger music fans who don’t immediately know the reference, they can give a song a significant leg up. But the varieties of interpolations are vast. For example, Paul McCartney had nothing to do with Drake using a bit of “Michelle” in “Champagne Problems” — it’s actually a sped-up sample of Masego...
MUSIC・1 DAY AGO
HollywoodLife

Following her split from Shawn Mendes, singer Camila Cabello stepped out to do some shopping in Los Angeles. Camila Cabello stepped out for a shopping trip in Los Angeles following her breakup from Shawn Mendes. The 24-year-old singer spent some time on Melrose on Monday, Nov. 22 and looked a bit downcast. She wore a vibrant red dress and black sandals for the outing.
LOS ANGELES, CA・9 DAYS AGO
iHeartRadio

Shawn Mendes has teased his first single since splitting up with Camila Cabello, promising 'it'll be okay'
CELEBRITIES・2 DAYS AGO