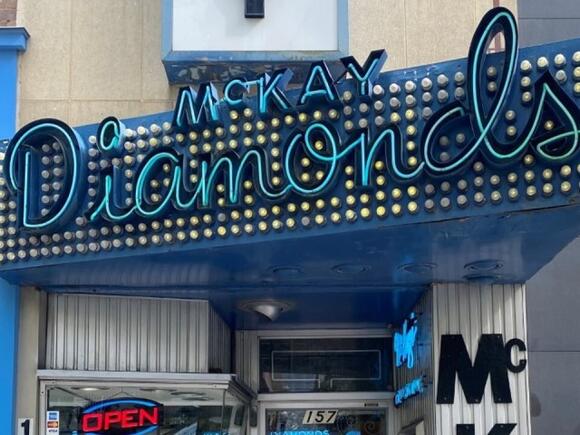 One of Salt Lake City’s Main Street mainstays is moving, just another in the latest of many changes in downtown.

McKay Diamonds opened in 1949 at 157 South Main Street in a long, narrow space, only about eight feet wide.

For the first sixty years, it was run by Bob and Frances McKay, who began a tradition of hanging framed photos of couple who’d bought their wedding rings at McKay’s.

After Bob retired, he sold the business to Joe and Sandra Andrade who have continued the tradition of running a “mom and pop shop”.

But changing times have now forced McKay’s to move.

The owner of the building wants to expand a neighboring restaurant’s ability to service an increased number of delivery orders, so the wall between the restaurant and the jewelry store will come down.

The Andrades say the owner of the building has been pleasant to work with, and the understand the need his business, and theirs, to adapt.

Still, saying goodbye has been emotional.

The massive photo collection and a few key vintage fixtures have been packed up by the Andrades and will move with them to their new location about a half-block east to 115 Regent Street, an area that’s recently been redeveloped.

McKay Diamonds is expected to reopen in it’s new location on Nov. 2.

Should Utah give homeless people a place to camp?

Utah doesn’t have enough shelter beds for people without homes, but these individuals can’t legally camp in a parking strip or a park, near train tracks or under the freeway.
UTAH STATE・3 DAYS AGO
FOX 13 News

Holiday travel at Salt Lake City International Airport is approaching levels seen prior to the pandemic. Wednesday, the day before Thanksgiving, the airport estimates 26,000 people passed through the facility’s doors, a sharp increase over the same day in 2020.
SALT LAKE CITY, UT・4 DAYS AGO
FOX 13 News

Parleys Canyon may soon be home to an open-pit limestone quarry, according to a proposal filed with Utah mining regulators this month. A recently formed LLC called Tree Farm proposes using explosives and drills to mine beneath the northeastern flank of Grandeur Peak, a popular hiking destination from Mill Creek Canyon, with the intent of extracting 2 million tons of crushed rock a year.
SALT LAKE CITY, UT・3 DAYS AGO

After the Thanksgiving food coma has worn off is when the holiday shopping madness typically begins.
SALT LAKE CITY, UT・4 DAYS AGO
FOX 13 News

A huge annual UTV event in Moab attended by thousands from across the country and internationally has been canceled for 2022.
MOAB, UT・3 DAYS AGO
FOX 13 News

Retailers aren't the only ones who are busy on Black Friday. Plumbers across the state anticipate a spike in calls for service in the wake of Thanksgiving festivities.
SALT LAKE CITY, UT・3 DAYS AGO
FOX 13 News

Demolition has begun on the North Visitors' Center at Salt Lake City's Temple Square, according to a report from the Salt Lake Tribune.
SALT LAKE CITY, UT・6 DAYS AGO
FOX 13 News

Hundreds of volunteers spent their Thanksgiving holiday giving back to the community by delivering meals across the Salt Lake Valley for the Salvation Army.
UTAH STATE・3 DAYS AGO
FOX 13 News

The sight of a bear climbing a tree in Richfield last week drew lots attention. Unfortunately for the bear, this was not the first time she had ventured near humans.
RICHFIELD, UT・4 DAYS AGO

Almost a million dollars in federal funding is coming to Utah to look at ways to connect the University of Utah’s Research Park Campus and the emerging Innovation District in downtown Salt Lake City.
SALT LAKE CITY, UT・6 DAYS AGO
FOX 13 News

Governor Spencer Cox called on Utahns to quit cable news and Facebook to heal political and social divides that have been exacerbated by the COVID-19 pandemic.
UTAH STATE・4 DAYS AGO
FOX 13 News

From April to September, here's what went into a Utah man trying to grow one of the state's biggest pumpkins.
UTAH STATE・5 DAYS AGO
FOX 13 News

A new pilot program is set to begin next week in an effort to reduce feral animal rates in rural areas of the state.
SUMMIT COUNTY, UT・5 DAYS AGO
FOX 13 News

Whether you’re traveling via automobile or airplane this Thanksgiving, experts are expecting an increase in travelers.
UTAH STATE・6 DAYS AGO
FOX 13 News

Those who live near the Rio Tinto Kennecott Mine may hear loud emergency sirens Tuesday, but it's part of a drill.
WEST JORDAN, UT・6 DAYS AGO
FOX 13 News

Nearly 400 tons of hay lost in fire in Utah County

Families in need will have a full Thanksgiving meal, thanks to the Frank Cordova Turkey Drive and the Murray Children’s Pantry.
UTAH STATE・6 DAYS AGO