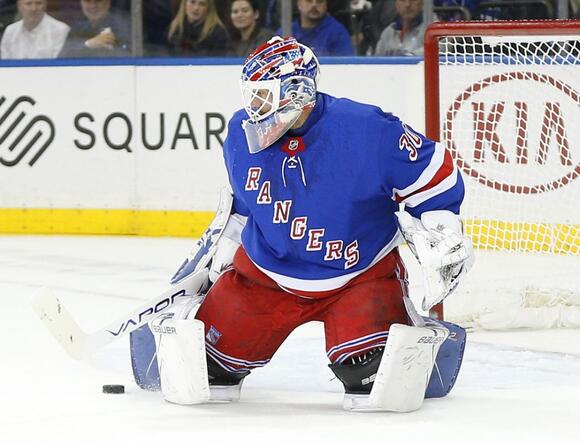 Henrik Lundqvist will have a front-row seat to view his former NHL team.

The recently retired goaltender will join MSG Network as a studio analyst for a number of New York Rangers telecasts. His first day of work will come Thursday, when the Rangers host the Dallas Stars at Madison Square Garden.

“It’s exciting to be a rookie again, and to join my new teammates Steve (Valiquette) and John (Giannone) on MSG Network this season,” Lundqvist said in a statement. “The Rangers run through my blood, and I can’t wait to break down games for the best fans in hockey.”

Lundqvist announced his retirement as a player on Aug. 20 after a bid to return following open-heart surgery in January. The health situation prevented the 39-year-old Swede from playing with the Washington Capitals, with whom he signed a one-year, $1.5 million contract on Oct. 9, 2020.

Lundqvist finished his NHL career with a record of 459-310-96 and 64 shutouts, a 2.43 goals-against average and .918 save percentage in 15 seasons with the Rangers. The former Vezina Trophy recipient guided the Rangers to an appearance in the 2014 Stanley Cup Final, where they lost to the Los Angeles Kings in five games.

The Rangers announced that they will retire his No. 30 jersey during the 2021-22 season.

“We are thrilled to welcome Henrik Lundqvist, one of the most iconic and beloved figures in Rangers history, to the MSG Network family and add his engaging presence to our Rangers studio team,” MSG Network president/CEO Andrea Greenberg said. “After an exceptional and dominant playing career on the ice, Henrik will undoubtedly continue to bring that same level of excellence to our Rangers broadcasts as an analyst this season.”

Chris Kreider and Kevin Rooney each scored twice Wednesday night for the surging New York Rangers, who cruised to a
NHL・7 DAYS AGO
Yardbarker

“I love being a Ranger, I think I fit in great here,” Ryan Strome said about his contract status. “Whatever happens, happens.”. This season, the 28 year-old is having another fine campaign. After a slow start and a bout with COVID, he has 10 points in 13 games. The underrated center continues to prove he’s a top six forward in the NHL after picking up 49 points in 56 games and 59 points in 70 contests the season prior.
NHL・12 DAYS AGO
nhltraderumor.com

New York Rangers looking to trade for a forward

The New York Rangers have started the season well going 10-4-3 after 17 games but that has not stopped GM Chris Drury looking to trade for a forward that can play in the top-six or bottom-six of the lineup. Darren Dreger was on TSN’s Insider Trading and reports the Rangers...
NHL・13 DAYS AGO
Sportsnaut

New York Rangers forward Mika Zibanejad was placed in the NHL’s COVID-19 protocol on Saturday. Zibanejad, who missed most of
NHL・12 DAYS AGO

Following up on a stellar 3-0 shutout win over the Predators, the Maple Maple Leafs will look to hold onto the title of the Eastern Conference’s hottest team as they take on the 10-3-3 New York Rangers, who are winners of four straight (7 p.m. EST, TSN4). No other team...
NHL・14 DAYS AGO
Forever Blueshirts - New York Rangers News

The New York Rangers and Toronto Maple Leafs laid their respective four game winning streaks on the line. Both teams played like they didn’t want it to end, and when it was over the score was indicative of that fact. The Leafs held on for dear life late to pick up their 5th straight victory.
NHL・13 DAYS AGO
Forever Blueshirts - New York Rangers News

The New York Rangers were absolutely atrocious in the faceoff circles on Thursday. The Leafs are tied for the NHL lead with the Hurricanes on draws at 55.2% and it showed against the Blueshirts who are 31 out 32 teams at 45.6%. Draw after draw, the Toronto Maple Leafs won...
NHL・13 DAYS AGO
Forever Blueshirts - New York Rangers News

The New York Rangers are 10-4-3 for 23 points after 5 weeks of the 2021-22 NHL season. That’s good for third place in the Metro Division, two points behind the Washington Capitals and three points in back of the Carolina Hurricanes (albeit with two games in hand). The Blueshirts are...
NHL・13 DAYS AGO

The New York Rangers announced this evening that Mika Zibanejad has been cleared to play against the Buffalo Sabres. Earlier today, he was kept out of practice due to a false positive test that forced him temporarily into COVID protocols. Rangers ready for matchup against Sabres. The Rangers were originally...
NHL・12 DAYS AGO
cdcgamingreports.com

Caesars Sportsbook was recently announced one of the nine sportsbooks that received a sports betting license in New York, and now they have some big plans for operation in the state. Caesars Sportsbook will enter the soon-to-open New York betting market behind a sweeping MSG deal that includes sponsorship of...
LIFESTYLE・14 DAYS AGO
elitesportsny.com

Some of the Rangers top guys as well as familiar faces stood out in Week 6. Week 6 is in the books and it was another good one for the New York Rangers. They played three close games, winning their matchups against the Montreal Canadiens and Buffalo Sabres while dropping the second game to the Toronto Maple Leafs.
NHL・10 DAYS AGO
elitesportsny.com

The Rangers look to finish up their solid week with a win at home. The New York Rangers have had split results this week, but are continuing to look good. They’re coming off a loss to the red-hot Toronto Maple Leafs, but played very well in that game. They beat...
NHL・11 DAYS AGO

Legendary New York Rangers goaltender Henrik Lundqvist will have his number 30 jersey raised to the iconic ceiling of Madison Square Garden on January 28th. “There’s no place like it,” Lundqvist said. “Can’t tell you enough how much I look forward to be back in the place that has meant so much to me in my life. See you at the Garden January 28th!”
NHL・11 DAYS AGO
Empire Sports Media

New York Rangers defenseman Ryan Lindgren scored the game-winner with .07 seconds left to cap a crazy 5-4 victory over the Buffalo Sabres. The New York Rangers and Buffalo Sabres appeared to be ready to take their contest into overtime Sunday night. Chris Kreider had the puck pinned in the...
NHL・10 DAYS AGO
Yardbarker

The New York Rangers played their first ever game against the Islanders at the UBS Arena. It took them a little while, but eventually they proved too much for the undermanned and slumping Isles. Chris Kreider may have notched two goals, but it was the Rangers 4th line that lifted...
NHL・7 DAYS AGO
Sports Illustrated

Any time two teams from the same city face off in any sport, a rivalry matchup will be played. On Wednesday night, NHL fans will see the Rangers take on the Islanders in what could be a very heated and entertaining game. How to Watch New York Rangers at New...
NHL・8 DAYS AGO
Forever Blueshirts - New York Rangers News

Assessing all the trade rumors surrounding the New York Rangers

Unless your focus has been elsewhere this week, you are aware that the New York Rangers have been mentioned often in the NHL rumor mill this week. If you have been out of touch prepping for Thanksgiving, or simply just more tuned into football, the Rangers are said to be in the market for a forward AND a defenseman.
NHL・11 DAYS AGO
nyihockeynow.com

ELMONT, N.Y. — The New York Islanders losing streak extended to seven games as they fell 4-1 to the New York Rangers in the first Battle of New York at UBS Arena. The Isles are now 5-9-2 and only three points ahead of the Ottawa Senators for last in the Eastern Conference.
NHL・7 DAYS AGO
nyihockeynow.com

Battle For New York: Islanders, Rangers Square Off Under Less than Ideal Circumstances

The game will go on. The COVID decimated New York Islanders are still scheduled to face the New York Rangers in the first-ever showdown between the interstate rivals at UBS Arena. Questions over whether the game would even be played swirled around for the past 24 hours since the Islanders...
NHL・8 DAYS AGO
Forever Blueshirts - New York Rangers News

The New York Rangers won their sixth game in their last seven tries. It was a 4-1 victory that saw the Blueshirts win a physical contest taking advantage of the Islanders misfortunes. The Isles loss extended their losing streak to seven straight games and third to open the UBS Arena.
NHL・7 DAYS AGO