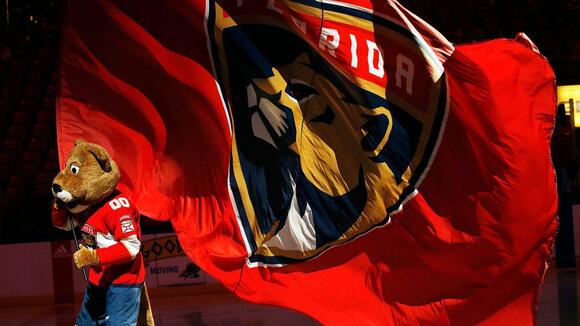 MIAMI (CBSMiami) – The long wait is nearly over as the Florida Panthers return to the ice for their season opener on Thursday.

This season is a normal one after the last two seasons were altered by the global pandemic.

Eighty-two games, full travel, playing every other team, just like it used to be.

The Panthers are one of the favorites this year to compete for the Stanley Cup.

There is a good reason why so many people are so high on Joel Quenneville’s team.

Start with him and his three Stanley Cups as an NHL head coach. Coach Q is second all-time in wins and 38 away from an incredible 1,000 coaching wins.

Then, there is one of the best 1-2 punches in the NHL in Aleksander Barkov and Jonathan Huberdeau.

Add in one of the top defensive pairs in Aaron Ekblad and MacKenzie Weegar.

Last season, the Panthers finished fourth in the NHL standings and gave the Stanley Cup champion Lightning all they could handle in the first round playoff series.

The Cats bring all of their top players back and have added a top player in forward Sam Reinhart.

Acquired in a trade from Buffalo, Reinhart is a legitimate scorer and will start the season playing with Barkov.

The Cats also added legend Joe Thornton. The 42-year-old has never won a Stanley Cup and he chose the Panthers as his team for his 24th NHL season to try and hoist that cup.

In goal, Sergei Bobrovsky gets the opening night start.

Twenty-year-old phenom Spencer Knight will get his opportunities early in the season, perhaps as soon as the second game, Saturday against the Islanders.

The bottom line is, as the season develops the best goalie will play. It is pretty simple.

A good start to the season always goes a long way because the Panthers have spent too many seasons chasing the pack.

Last year, they played well right from the get-go and cruised into the playoffs.

A return to the postseason is far from guaranteed in the very tough Atlantic division and eastern conference.

The Cats looked good in training camp, playing with good speed and production in going 5-2 in preseason games.

But, it is time to drop the puck for real.

SUNRISE, Fla. -- Aaron Ekblad scored at 2:39 of overtime when the Florida Panthers tied the NHL record with their 11th consecutive home win to start the season, 2-1 against the Philadelphia Flyers at FLA Live Arena on Wednesday. The Panthers (14-2-3) matched the 1963-64 Chicago Black Hawks for the...
NHL・12 DAYS AGO
NHL

SUNRISE, Fla. -- The Florida Panthers failed to set the NHL record for consecutive home wins to start a season when they lost 4-1 to the Seattle Kraken at FLA Live Arena on Saturday. The Panthers won their first 11, tying the 1963-64 Chicago Black Hawks. "We all know what...
NHL・9 DAYS AGO
Sportsnaut

Video: Kenny Pickett scores touchdown on what should be illegal play

Kenny Pickett scored a touchdown to open the ACC Championship Game for Pitt against Wake Forest on Saturday night, and he scored using a move that should be illegal. Pitt had a 3rd-and-5 at their 42 just a few minutes into the game when Pickett felt some pressure and took off running. He saw some defenders converging on him as he approached the Wake Forest 40 and began to go into a slide motion. He started to slow down and tuck his right leg like he was giving himself up to slide.
COLLEGE SPORTS・2 DAYS AGO

Cam Newton's return to the Carolina Panthers came in Week 10, but he made his first start at quarterback of the 2021 NFL season during Sunday's Week 11 game against the Washington Football Team. The veteran quarterback played well, completing 77.8 percent (21-for-27) of his passes for 189 yards with...
NFL・14 DAYS AGO
saladovillagevoice.com

Salado Eagles are 2-1 as they go into the Thanksgiving break. In play last week, Salado saw Josh Goings set the single game scoring record for SHS boys basketball. Salado Eagles jumped out to a 17-7 lead over the visiting Lorena Leopards and held on to win 60-53. Josh Goings...
SALADO, TX・12 DAYS AGO
Pro Hockey Rumors

What the Bruins are thankful for in the 2021-22 season

As the holiday season approaches, PHR will take a look at what teams are thankful for as the season heads towards the one-quarter mark. There also might be a few things your team would like down the road. We’ll examine what’s gone well in the early going and what could improve as the season rolls on for the Boston Bruins.
NHL・12 DAYS AGO
WEEI Sports Radio

The NHL’s inconsistency when it comes to penalizing slew-foots continues, as Devils defenseman P.K. Subban committed his fourth of the season Friday night and apparently won’t face any supplemental discipline for it.
NHL・2 DAYS AGO

Fan expectations for Filip Zadina have been pretty high since he slipped to the Detroit Red Wings in the 2018 NHL Draft. Zadina has yet to have a breakout season – could 2021 be the year?. “Snakebitten” was the word used to describe Zadina last season. Even the best of...
NHL・13 DAYS AGO
NHL

SUNRISE, Fla. - The Florida Panthers announced today their 2021 Black Friday special offers for all Panthers fans to enjoy on Friday, Nov. 26. All fans can purchase the 'Captain's Holiday 4-Pack' which includes four lower-level tickets to select games and an Aleksander Barkov red home jersey for $160. Jersey production and shipping time is an estimated eight weeks.
NHL・10 DAYS AGO
NJ.com

Anthony Byles, Northern Burlington, So. In the limited season, Byles managed to make an impact in his freshman season as the top scorer on a 3-3 Northern Burlington squad. With a 151 average highlighted by a 559 against Ewing. Byles will look to improve his numbers as a sophomore and perhaps assume the anchor spot on a young team that only lost one senior from last season.
TRENTON, NJ・10 DAYS AGO
pvpanthers.com

PRAIRIE VIEW – The Prairie View A&M football team had a tough time stopping Mississippi Valley, as they completed the 2021 regular season with a 24-19 Southwestern Athletic Conference loss to the Delta Devils on a blistery and rainy Saturday afternoon in Panther Stadium on senior day. HOW IT HAPPENED:
MISSISSIPPI STATE・9 DAYS AGO

We’re starting to get an idea of who some of the teams are that might be interested in Boston Bruins forward Jake DeBrusk now that his trade request has gone public.
NHL・5 DAYS AGO
CBS Miami

MIAMI (CBSMiami) – The Miami Dolphins winning streak can reach five this week against the Giants. It’s all coming  together for Brian Flores team since starting the season 1-7. The stunning turnaround is being led by a suddenly tenacious defense and quarterback Tua Tagovailoa. Hard Rock Stadium will be buzzing as plenty of New York fans in South Florida get a rare chance to see their team live while Dolphins fans are having fun watching winning football. POUNDING CAROLINA Last week was the most complete game of the season as Miami blew out the Panthers. The defense absolutely throttled Cam Newton and got...
NFL・4 DAYS AGO
NESN

BOSTON — Don Sweeney did not need to say much Tuesday to indicate he is not in agreement with the punishment Brad Marchand received this week. The Boston Bruins winger on Monday was given a three-game suspension for slew-footing Oliver Ekman-Larsson in Sunday’s win over the Vancouver Canucks. Marchand has cleaned up his game in recent years, but his reputation was part of the conversation in his hearing.
NHL・6 DAYS AGO
Adrian Holman

I must have eaten too much turkey last week because my record for last week was 8-7 even though I was 3-0 for the Thanksgiving games. My overall record for the NFL regular season so far is 111-67-1.
4 DAYS AGO
aseaofred.com

The Liberty Flames saw its 2021 regular season come to an end on Saturday with a 35-16 setback to the Army Black Knights. The Flames finish the regular season having dropped three straight games to Ole Miss, Louisiana, and Army as Liberty finishes the regular season with a 7-5 record.
COLLEGE SPORTS・7 DAYS AGO
CBS Miami

MIAMI (CBSMiami) – Miami Heat’s Center, Power Forward Bam Adebayo will likely be out for a few weeks after suffering a torn Ulnar Collateral Ligament in his right thumb. The injury occurred during Monday’s game vs Denver and will undergo surgery this upcoming weekend, according to the team’s Twitter account. The team said a timetable for his return will be provided post-surgery. Adebayo, a 2020 NBA All-Star, appeared in 72 games last season and averaged 15.9 points, 10.2 rebounds, 5.1 assists, 1.29 blocks, 1.14 steals, and 33.6 minutes while shooting 55.7 percent from the field. In the postseason during Miami’s run to the NBA Finals, Adebayo appeared in 19 games and averaged 17.8 points, 10.3 rebounds, 4.4 assists, 1.00 steals and 36.2 minutes while shooting 56.4 percent from the field and 78.3 percent from the foul line. He posted eight 20-point double-doubles, the second-most for a single postseason in HEAT history and led the team in scoring average (21.8) during the Eastern Conference Finals series win against Boston.
NBA・5 DAYS AGO
lakersnation.com

The 2021-22 season has been a rough one so far for the Los Angeles Lakers as each game seems to be a roller coaster no matter who the opponent is. The Lakers sit at 10-11, but it feels like they have largely underwhelmed as they have yet to put together a complete game on both sides of the floor. While Los Angeles has a couple of quality wins against teams like the Cleveland Cavaliers and Miami Heat, they have blown large leads or been outright embarrassed by better competition.
NBA・8 DAYS AGO
USA TODAY Sports Media Group

The college football 2021 season has been a wild one, and nothing short of exciting. The regular season wrapped up this past weekend, and numerous championship games are on deck this weekend before bowl season begins. However, before moving ahead, let’s take a look back at the most viewed games of the year.
COLLEGE SPORTS・4 DAYS AGO