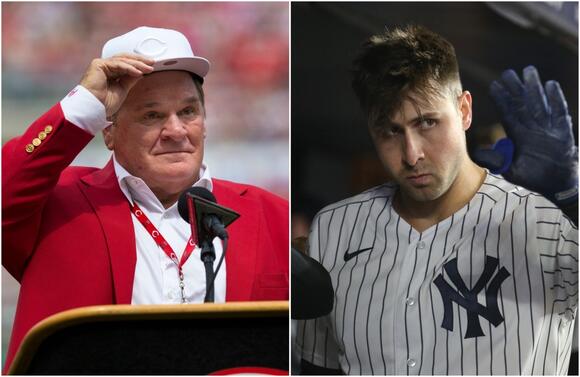 After he was acquired by the Yankees prior to the trade deadline, outfielder Joey Gallo had plenty of fans fuming over his high strikeout rate.

Some got over it, focusing on Gallo's power, plate discipline and elite defense. Others, not so much.

Sounds like we can put Pete Rose, baseball's all-time hit leader, in the latter category.

Speaking about New York's disappointing performance this season—a tumultuous campaign that ended with a loss to the Red Sox in the Wild Card Game last week—Rose's rant specifically targeted the Yankees' outfielder.

“That was the worst f--king lineup they could have put on the field,” Rose told USA Today, as pointed out by NESN. “Their 6, 7, 8, 9 hitters were all out-men. They had to have [Aaron] Judge and [Giancarlo] Stanton do something. If they didn’t, all of the pressure was on Joey Gallo. You saw how that worked out.

“How does someone who didn’t play every day strike out 213 times? Ray Charles wouldn’t strike out that much. I just can’t imagine striking out 213 times without killing myself.”

Gallo is under contract for one more season with the Bombers, set to start in the outfield and provide some left-handed balance to the middle of New York's righty-heavy lineup in 2022. The 27-year-old was acquired in a deal that featured four prospects heading from the Bronx to the Texas Rangers.

Rose certainly knows a thing or two about hitting. He racked up a record 4,256 knocks over 24 years. But this criticism is particularly harsh.

Again, as much as Gallo struggled at times with the strikeout bug—he ended up leading Major League Baseball in the category in 2021—he does bring other attributes to the table. The outfielder led the American League in walks (111), smacked 38 home runs and flexed tremendous defense and durability over the course of the season.

For the second year in a row, Joey Gallo has won an American League Gold Glove Award in right field. Spending the second half of this season with the Yankees, after he was acquired at the trade deadline from the Rangers, Gallo receives more hardware for his elite defensive skills.
MLB・22 DAYS AGO
InsideThePinstripes

Hal Steinbrenner Expects Joey Gallo to Bounce Back Next Season: 'I'm Not Worried'

Joey Gallo's first few months in pinstripes didn't go as planned. Sure, the slugger walloped 13 home runs with the Yankees after he was acquired prior to the trade deadline, finishing the season with 38 long balls, but he hit .160 with 88 strikeouts over just 58 games with New York.
MLB・12 DAYS AGO
New York Post

Brian Cashman is looking for a shortstop with “urgency,” but he hasn’t determined whether “it will be in a big way, a small way, an acceptable way? We’ll see.”. What the Yankees general manager does know, though, is that Joey Gallo is expected back in left field despite a rough debut in The Bronx.
MLB・11 DAYS AGO
Yardbarker

If the New York Yankees didn’t make a single move this off-season, they still have enough talent on the roster to be a competitive team. Unfortunately, some of their critical role players this past year struggled offensively, putting too much weight on the shoulders of the bullpen and starting rotation.
MLB・10 DAYS AGO

Mark Gonzales: Is it time to let Pete Rose into the Hall of Fame?

A few DraftKings signs were plastered on the southeast corner of Wrigley Field last week in anticipation of the sportsbook to be constructed within a relay throw from the visitors clubhouse. And with Monday's release of the Hall of Fame ballot and subsequent elections lurking as means of honorable news...
MLB・8 DAYS AGO
FanSided

The Texas Rangers could actually trade for Joey Gallo

This can’t be real, can it? Not after just two-plus months as a Yankee after being acquired from the Texas Rangers in exchange for four prospects?. Well, feast your eyes on this, Rangers fans. Joey Gallo could be on the outs in the Bronx as the Yankees are reportedly fielding trade calls on the Gold Glover.
MLB・2 DAYS AGO
FanSided

Yankees rumored to be listening on Joey Gallo trades, but who replaces him?

Welcome to a classic example of what feels like a New York Yankees half-rumor. The buzz? The Yankees have heard from a number of teams, in recent weeks, attempting to buy low on Joey Gallo after a difficult first two months of swinging and missing in pinstripes. Sure. The Yanks...
MLB・1 DAY AGO
The Spun

Former Mets pitcher Pedro Feliciano reportedly passed away in his sleep on Sunday night. ESPN’s Eduardo Perez first had the news on his Twitter account on Monday morning. Feliciano was just 45 years old and was reportedly jet skiing on Sunday with his family. Feliciano played nine seasons in the...
MLB・22 DAYS AGO

If you want to know what the ABSOLUTE FLOOR is for a Carlos Correa free agent contract, the Houston Astros just supplied it. After reports of previous extension efforts that came up well short, the Astros have made an offer to retain Correa now that he is actually on the doorstep of free agency:
MLB・24 DAYS AGO
Empire Sports Media

The New York Yankee family was saddened to learn of the passing of ex-Yankee manager Bill Virdon. Virdon was manager of the Yankees during 1974 and 1975 before being replaced in 1975 my the new manager Billy Martin. In 1974 he won 89 games for the Yankees. However, Virdon’s claim...
MLB・5 DAYS AGO
Larry Brown Sports

Freddie Freeman has donned only a single uniform throughout his Major League Baseball career. And if the Atlanta Braves have their way, it’s the only uniform he’ll ever wear. But the path to that end may not come without come some hiccups. Freeman is currently a free agent and seeking...
MLB・17 DAYS AGO

That’s how some teams approach MLB free agency, including the New York Yankees, who are just two years removed from handing ace Gerrit Cole a record-setting nine-year, $324 million contract. Expect general manager Brian Cashman to do some more spending this winter, according to SNY MLB insider John Harper, who...
MLB・22 DAYS AGO
FanSided

The Atlanta Braves are on top of the world, and rightly so. But just as the World Series ends, the offseason begins. These Braves won’t be back to potentially repeat. The Braves surprised all of baseball, taking a team without Ronald Acuña, Jr. and a suspect bullpen to the MLB mountaintop. Now, Alex Anthopoulos must start all over again.
MLB・27 DAYS AGO
The Spun

The Yankees are sending an infielder to LA. On Monday, the team reported Tyler Wade has been traded to the Angels. “The New York Yankees today announced that they have traded INF/OF Tyler Wade to the Los Angeles Angels,” the team announced on social media. The trade is for a...
MLB・8 DAYS AGO
News-Democrat

Two career-long St. Louis Cardinals with a combined 20 seasons in the big leagues officially cut ties with the team on Thursday morning, as the club officially declined its contract options on infielder Matt Carpenter and pitcher Carlos Martínez. Carpenter’s buyout will cost the club $2,000,000; Martínez’s will cost $500,000.
MLB・26 DAYS AGO

The Associated Press reports the Detroit Tigers added infielder Kody Clemens, the youngest son of seven-time Cy Young winner Roger Clemens, to their 40-man roster. The 25-year-old Clemens, an infielder, hit .247 with 18 homers and 59 RBIs in 97 games for the Mud Hens last season, his first year at Triple-A.
MLB・8 DAYS AGO
The Spun

It remains unclear where Freddie Freeman will end up, but one thing is clear: there are no worse places for Braves fans to see him than these 3 teams. Although Braves first baseman Freddie Freeman rejected the Braves’ initial extension offer of five years for $135 million, it doesn’t mean that he rejected the prospect of returning to Atlanta.
MLB・7 DAYS AGO